A far as I know, only Scar, Hades and Cruella had a SO previously:

-Zira went apeshit. The man/lion she obsessively loved and adored had chosen a TIGER over her! She felt betrayed, even if they were no longer together and she almost turned their argument into a physical fight but they were separated by Nuka, Vitani and Shere Khan.

To be honest, she kinda had a reason to be mad: 1) They had raised 3 cubs together before Scar’s death; and 2) He didn’t even tell her anything, he just appeared holding hands with Khan one day.

Now they don’t talk, kinda like Rourke and Helga, and just avoid each other as much as possible. They both got new partners and new lifes in Disneyville anyway.

-Once Jafar and Hades get together (it’s gonna happen later in the fic but 100% happening) Persephone didn’t really cared. She knows that the relationship she had with Hades was going nowhere anyways, and in the bottom she is kinda glad that he got someone who shares his evil ways (something she did NOT)

-Lars is cool with Cruella so he doesn’t really mind her dating Grimhilde now, he is so glad is someone else and not him.

Those are all… I think.

Most of my ships are unlikely tbh: https://evildisneydorks.tumblr.com/post/634816924888563712/do-you-do-couple-headcanons-like-what-each-couple

But that doesn’t matter cuz we are here to make villains smooch each other ;D

In all seriousness tho, I think one that could not happen in real life is Shere Khan/Scar beacuse big cats generally don’t get along unless they have grown up together in captivity, are related to each other or have cubs together.

WHile it is true that felines are social creatures they also tend to be very territorial and attack outsiders, wheter it be their own kind or a different kind of big cats.

Soooo if  this was set in the real world and  Scar and Shere Khan are wild cats… they would probably try to kill each other. Shere Khan would win since he seems to be physically stronger than Scar and end up eating him.

when i chose giselle for this month, i didn’t realize november 21st was enchanted’s release date anniversary! i literally only learned that this morning haha. very serendipitous to be uploading her on such a day 😊 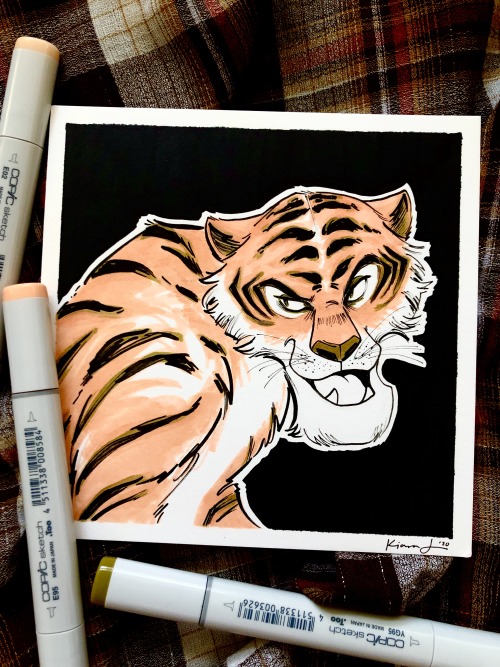 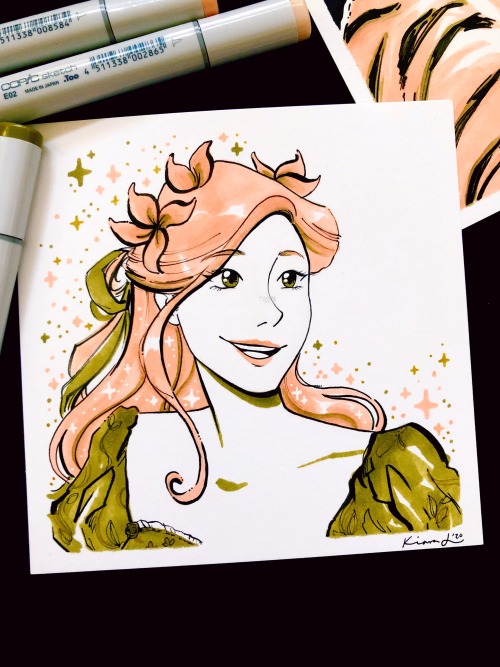 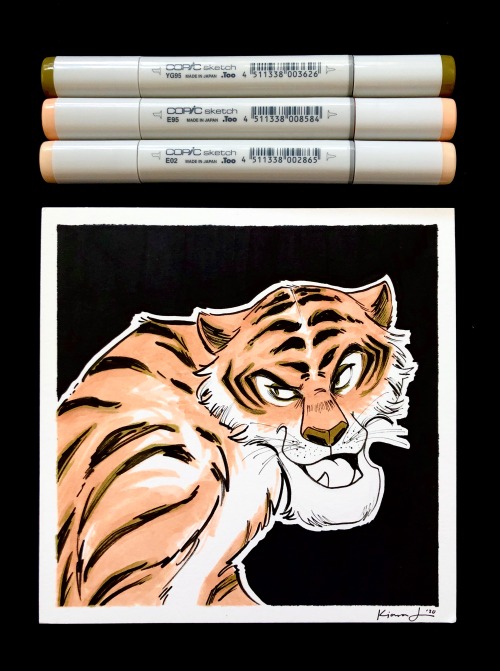 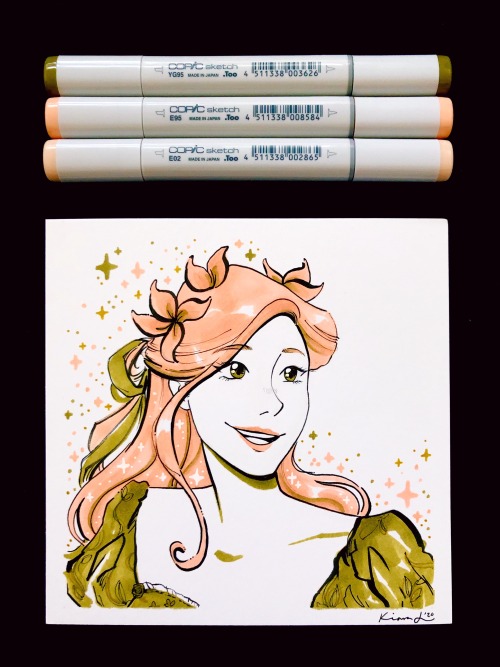 In the words of Rudyard Kipling, this describes Mowgli’s kidnapping by the Bandar-Log, the monkeys:

“The monkeys followed Baloo and Bagheera and Mowgli through the jungle very quietly till it was time for the midday nap. Mowgli fell asleep between the panther and the bear, resolving to have no more to do with the Monkey-Folk. The next thing Mowgli rememberered was feeling hands on his legs and arms, then a swash of branches in his face. Soon, he was staring down through the swaying boughs as Baloo woke the jungle with his deep cries and Bagheera bounded up the trunk with every tooth bared. The monkeys howled with triumph and scuffled away to the upper branches where Bagheera dared not follow. Two of the strongest monkeys caught Mowgli under the arms and swung of with him through the treetops. Sick and giddy as Mowgli was, he could not help enjoying the wild rush, though the glimpses of the earth far down below frightened him.” 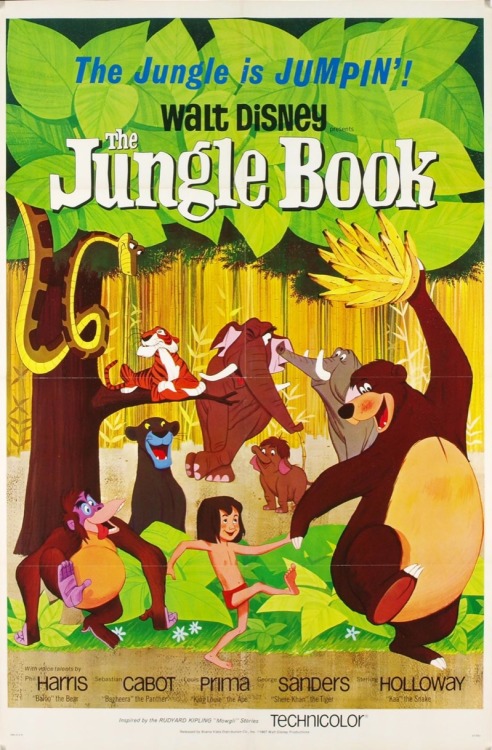 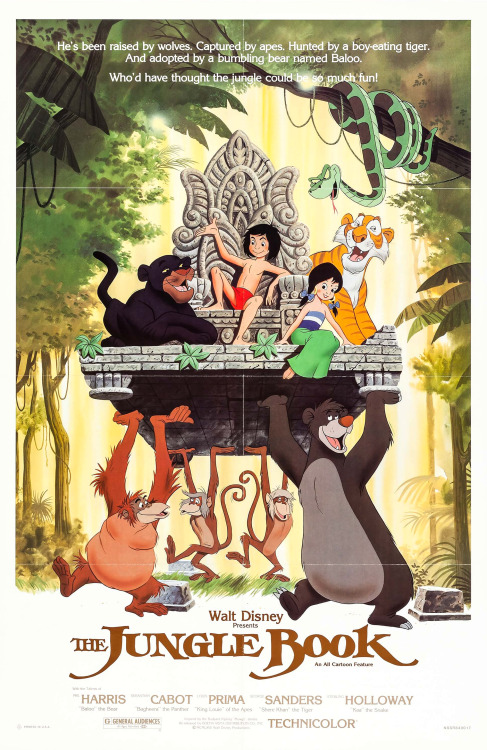 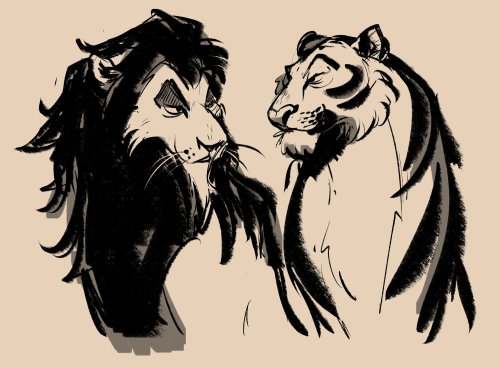 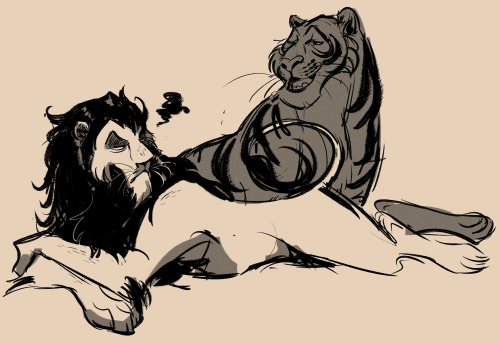 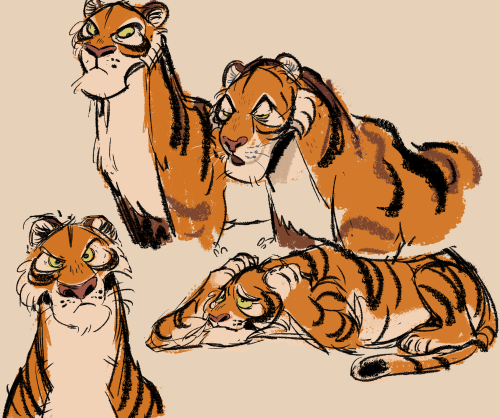 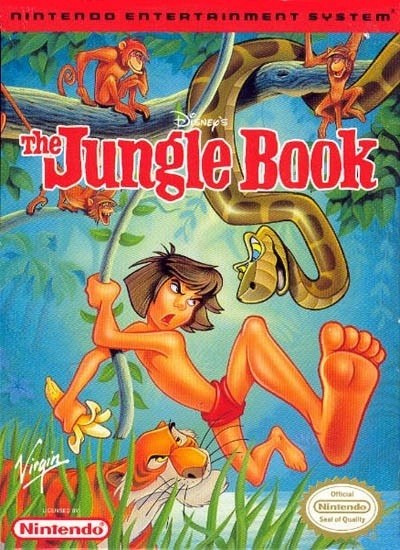 Clayton would be more careful with his persona, being more aware of what is near him and what is touching his body, especially near his neck. His neck becomes extra sensitive for him because for a while he can’t wear collared shirts and neckties or handkerchiefs. At times he can feel the vines around his neck and cutting off his airways. What he does to help relieve him of the mental pain is to put his head between his knees, get out from the indoors for fresh air, leave the crowd to a secluded area, open a window and stick his head out. He learns breathing techniques too.

Gaston would probably have a fear of heights because he fell to his death. He feels like he loses his balance when he’s at great heights. Climbing, he’s good at, but knowing he’s at a high place gets him anxious though he’ll never admit it to anyone. Therefore, he tries not to go anywhere high. Maybe he can see high range views but he needs to be at a safe distance from the ledge and pay attention more to the view to distract him from the trauma. And thunderstorms are a painful reminder so he tries to block out the noise by firing his gun or being in the tavern to drown out the noise.

Ratigan also develops a fear of heights so he sticks to the sewers and the ground. He avoids going on any blimps and high places, sending anyone who even hints at his fear of heights to Felisha’s stomach without any remorse. That’s how he deals with his trauma. Maybe he even gets another cat and trains it to catch him should he ever find himself in a high place again.

When Hades comes out of the River Styx, he stays way away from the spirits of the dead. Yeah, he’s lord of the dead, and handling the spirits is his job but they did drag him in the River Styx. He’s tense around them, his fire always flicking to hazardous flames and his temper becomes shorter than it was before. He can’t really do anything to deal with this trauma, just suck it up and get to work. Do you think he’s going to let himself become the laughing stock of the three main gods because he can’t handle his own subjects? Hell no (pun not intended).

Scar is traumatized by both fire and hyenas. He was always distrustful of others so that trauma makes him anxious and snappy. He can’t be near anyone for so long without feeling some threat coming along even if the other isn’t threatening. Solitude is how he handles this trauma even though it’s not good for his health. The fire trauma leads him unable to deal with the heat when there are heat waves he sticks to cool caves and shady places, even taking dips in the water to keep him cool. Shere Khan has a fear of fire so he understands. I can see them helping each other out though they’ll only say it’s for survival.

The Queen of Hearts reminds me of the Vocaloid song Alice Human Sacrifice. For her to exist people must dream of her, so she tries to get people to dream of Wonderland and therefore dream of her. She doesn’t want to be forgotten, she doesn’t want to be left alone but she doesn’t realize that she wants to be around people and to be loved. Deep, deep, deep down she may know she’s lonely but it’s hard to accept you have no one. So getting people to dream about her is the next best thing.

Facilier can’t handle going to cemeteries anymore. And he can’t stand feeling the dirt under his feet, he needs solid concrete. He partially developed claustrophobia and his shadow helps him through any panic attacks he gets. Vice versa too, Facilier is there for his shadow when it gets scared by the friends on the other side and the memories of the trauma. Facilier finds a place to live where it has a good amount of space so it doesn’t trigger any panic attacks. He still has friends on the other side but he makes small, easy deals with them so his fate isn’t repeated.

Shere Khan “The Jungle Book”  One of my favorite Disney bad guys of all time. 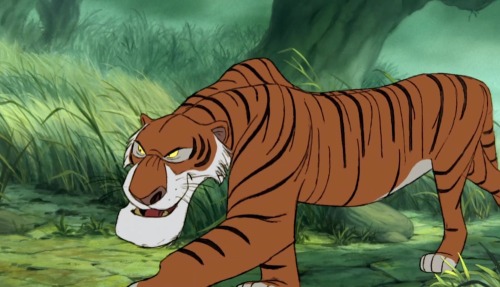 Ok, I was today years old when I discovered that, for one episode, the usual “Disney’s Greatest Villains” show hosted by a sort of Magic Mirror was once hosted instead by Shere Khan and Kaa and I need to see it, if only I could find it!

You are a tiger cub and Shere Khan finds you in the jungle. He immediately takes you in because tigers are becoming rare in this part of the jungle thanks to those humans who hunt for fur. It’s not his element being a father-figure but he tries his best. Mostly he’s exhausted because you are curious and like to explore the jungle and he wants you close. He’s strict but he also believes himself to be fair.

I’ve been agonizing for weeks as I wanted to write something for two of my favourite Disney villains (Clayton & Shere Khan) and couldn’t figure out what, until my brain was like- why not combine them?

So here we are, just a little headcanon of a time where these two might have run into eachother!

Clayton is used to the heat, the wet that clings to every fiber of his body and drips from his hair. He knows what it’s like to sit for hours on end, perfectly still in the sweltering atmosphere.

If he were poetically inclined (not until several glasses of port and his own company he’s not), he’d say you could almost melt into the jungle. Suck the shade from the glistening bark and obnoxious palm leaves fanned out above.

if you’re lgbt reblog this and tag your identity, and what queer-coded Disney villain you pretended to be as a child 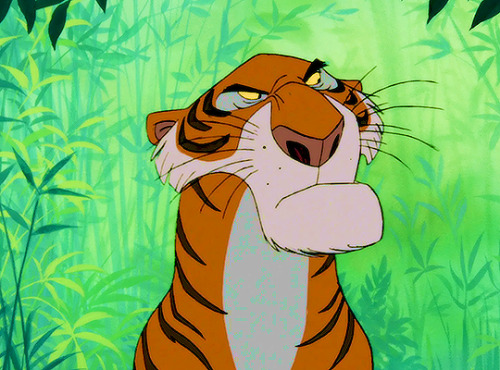 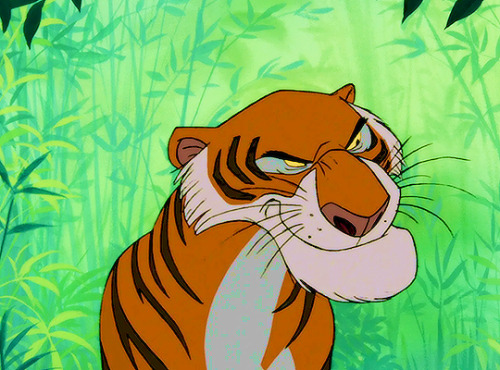 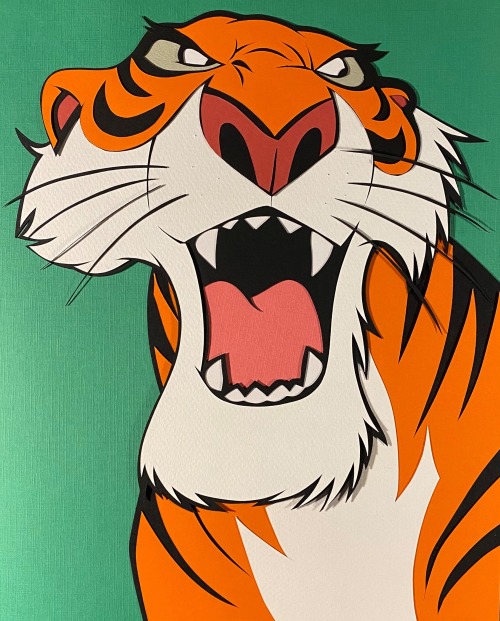 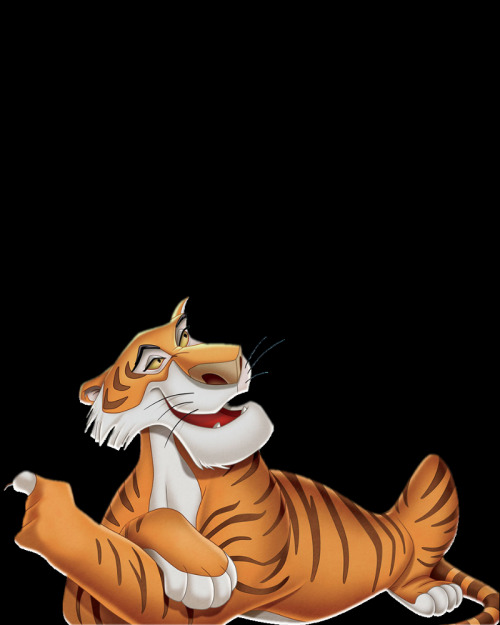