Kat: Anne told me if I lay on my stomach when I sleep I can’t breathe as much

Catalina: But it’s like if you lay on your back your sternum digs into you

Kat, nodding: And if you lay on your side your ribs dig into you

Kat and Catalina just staring at each other

(I have this problem, think it’s cuz of my eds/hsd and bones being weird but idk)

so in my attempt to escape my responsibilities i’ve found myself in a deep youtube hole of bondi rescue videos so clearly a six lifeguard au is in order.

the aus cast is the obvious choice but i think the west end cast lifeguarding at a swimming pool could be fun as well.

catalina and jane would be senior lifeguards, and anna i think would be close to that position. cathy and anne would be newbies but not in training, they’ve probably just gotten fully into the job. i think kitty would be just about to reach that spot, she’s new but close to completing her training. also, not that i’ve ever written for the liw, but they would definitely be clubbies (volunteer lifeguards).

i have no clue what the plot would even be but just indulge me in this.

Roman as Katherine of Aragon

Janus as Anna of Cleves

Back at it again with the Six surveys. I’ve always really liked the idea of an all [blank role] cast, so let’s see what you guys think about em!

When you barely escape getting beheaded through your wits, but you are then reincarnated centuries later with two queens who preceded you who weren’t as lucky…..

Anna: Did you just walk away from Jane mid conversation?

Anne: What can I say? She was boring me to death, my survival instincts kicked in.

Meaning of the color:
The orange on Mary’s outfit represents the fire, where she burned a lot of people, but also represented warmth and enthusiasm, representing the first period of her reign.
Is also related to her dear mother, Catherine of Aragon, who wears yellow, and her step-mother Anna of Cleves, which she was close to, some saying that Anna was there when Mary went to get what was her by right.

Alternates that does cover her:
Aurelia, the golden alternate
Rosa, the tea rose alternate

Songs for her:
Bloody Mary- Lady Gaga
you should see me in a crown- billie eilish 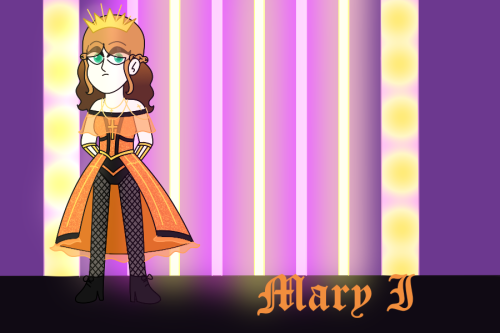 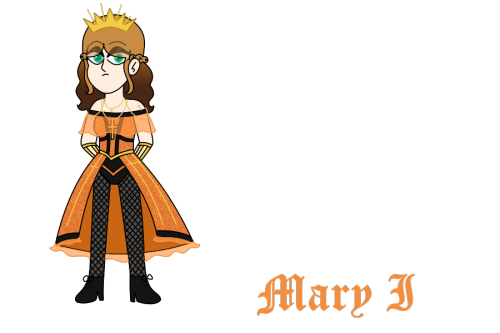 #six the musical#six the kids#Mary I#Mary Tudor#Bloody Mary
0 notes
modernqueensix
Conversation
Thomas
*walks in*
Cathy
What the hell are you doing here?
Thomas
:(
Cathy
You know what, Kit? You might be right. We might actually have the worst luck of all time because I can't marry you if I'm in jail foR KILLING THIS BITCH!
Kit
Now look what you did, she's using profanity on her wedding day!
#Thomas Seymour#Catherine Parr#Parrward#Six#Six the musical#Six incorrect quotes#GET HIS ASS CATHY#AND THEN GET THOMAS HOWARD NEXT#source: Glee#again I added in that last line#that should be the last one for now#but I make zero promises
20 notes
secondbutthole
Answer

Catalina was a proud queen. She felt she had a reputation to uphold as the first of six, and although she loved every single queen that lived with her, she felt like she had expectations placed on her. If you asked any of the other five, however, they’d tell you the opposite; she was her own person, and she was allowed to make mistakes.

The eldest took comfort in the fact that she didn’t have as much residual trauma as the others had (although that was a lie, and she often stayed awake at night praying a seemingly endless prayer to not let the others get sick of her and to not send her away), and like Jane, often helped the others when they had their bad moments.

But after a night of staying up late doing her (endless) prayers, Catalina just found herself so exhausted. It would have been her turn to make breakfast, always the early riser, but she found herself out of bed at nine in the morning.

As she sat downstairs on the sofa, dazed and seeming rather upset, she felt warmth bloom in her chest as a cold plate was pressed into her hand (bacon, eggs, and toast lightly toasted to dip) with a cup of coffee placed on the table beside her. She was just so thankful for the women she called her family.

#six the musical#i'm so sorry this took so long i had a nap!!#please send more prompts in#Gray Faces
5 notes
isabellalinton
Answer

yeah idk why they don’t just block me, like i’m literally one person. but that’s good to hear!

Bessie, a Bloodhunter: Don’t worry, guys! I got this!

A ARE YOU GUYS SEEING THIS😭. @HSIFEOGHEOFHEIFNEG PLEASEE

what would Cathy’s go to coffee order be? Black? Idk i don’t drink coffee

happy birthday to izuka hoyle, who played catherine parr in the original off west end cast and original cast recording of six the musical!

happy birthday to millie o’connell, who played anne boleyn in the original uk tour and original west end casts of six the musical!

#six the musical#millie o’connell#queen birthdays#PRETEND I DIDNT LEAVE HER OUT IN MY INITIAL LIST IM SORRY#ILY MILLIE
48 notes
modernqueensix
Conversation
Cathy
Do you even know WHY a groom couldn't see a bride before the wedding?
Kit
Cannibalism?
Cathy
No. It dates back to arranged marriages. People thought that if the couple had time to see each other before the wedding, they would change their minds and bail on actually getting married.
Kit
:(
Cathy
That's not US, okay? Because you love me, and I love you. And no silly superstitions are gonna change that.
Kit
:)
#Catherine Parr#Katherine Howard#Parrward#Six#Six the musical#Six incorrect quotes#source: Glee
30 notes
letsgoravendors
Text

Cathy: 17 muscles are activated when you cry.

Cathy: So even if you’re depressed, at least you still have a passion for fitness.

Kitty: If that’s the case, all of us should be hella fit.

#six the musical#catherine of aragon#catherine parr#anne boleyn#jane seymour#katherine howard#henry viii#anna of cleves#Youtube
7 notes
modernqueensix
Conversation
Cathy, seeing Kit trying on her wedding dress
When I pictured my wedding day, I thought I would be the most beautiful woman there, but I was wrong. You will be. You look amazing.
Kit, panicking and grabbing a curtain to cover herself
Cathy, what are you doing here?! This is like the ultimate bad luck! A bride CANNOT see her bride before the ceremony! Why are you trying to sabotage this wedding!
Cathy
You know what? This was all adorable, but now I'm putting my foot down. Do you even know WHY a groom couldn't see a bride before the wedding?
Kit
Cannibalism?
Cathy
No.
#Catherine Parr#Katherine Howard#Parrward#Six#Six the musical#Six incorrect quotes#source: Glee#there's more#but I thought it would be funnier#to stop it right there instead
26 notes