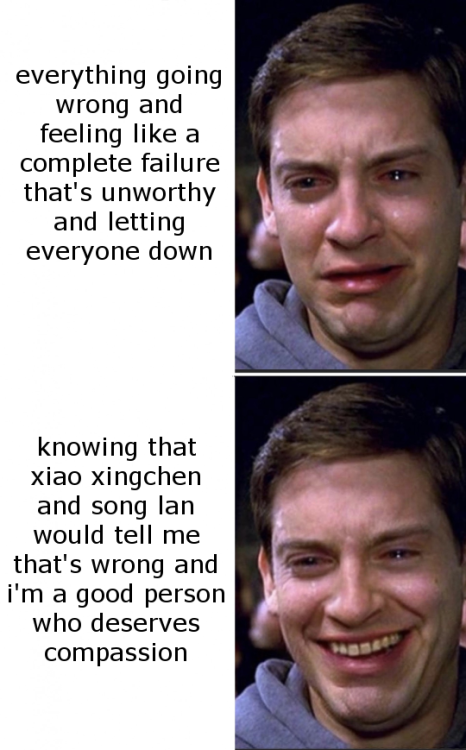 #my only comfort is knowing that two fictional characters would be like 'no ur doing great', #xiao xingchen, #song lan, #tagging it because it's a nice thought and whoever reads it this is true about you too
2 notes · See All
disastermagesText

Xiao Xingchen didn’t know what he expected. Part of him had known that his grandmaster would be accompanying them to Gusu, but he still hadn’t fully grasped it by the time they were leaving the inn, the six of them walking with Xiao Xingchen and Song Lan at the head of the group with A-Qing walking between them, and Baoshan Sanren bringing up the rear.

Another, smaller part of him had expected his grandmaster to take charge like she had on the rare and special occasions that she brought him and Cangse along on her shorter journeys down the mountain, her back straight and her shoulders square as she led them through towns, showing them how to pass through without calling attention to themselves. She’d shown them the signs of disturbances, too, stopping whenever the opportunity struck to let them see examples as close as she dared let them get.

He and Cangse had been competitive when it came to identifying whether something was a haunting or a possession or just a simple monster. Their guessing games kept going until Baoshan Sanren announced that she’d had enough of their arguing, but they’d always picked them back up the second she stopped listening.

He doesn’t realize that he’s smiling until he feels Song Lan bump their shoulders together, “Is  something funny?” The question comes quiet and soft, the smile on Song Lan’s face smaller than usual, though it still makes Xiao Xingchen’s breathing come easier.

“Just remembering something, that’s all.” Xiao Xingchen murmurs back, the tandem motion of the both of them swinging A-Qing over a mud puddle is muscle memory as she giggles. “My sister and I used to bicker whenever our grandmaster would take us off the mountain with her, it drove her to the point of using a silencing spell on us once.” Xiao Xingchen explains, his shoulders shaking slightly as Song Lan huffs out a laugh of his own, his smile starting to reach his eyes just a bit more.

#the untamed, #mdzs, #mdzs fic, #wangxian, #songxiao, #xiao xingchen, #wei wuxian, #song zichen, #lan wangji, #wei ying, #lan zhan, #song lan, #baoshan sanren, #a-qing, #lan yi, #as usual the ao3 link and links to the other parts will be in the reblog to my main, #in light of recent events ive decided to use ao3 until a better alternative is found and when it is i will hop myself over there and move my, #fics and stuff over there but until then ill keep using it and ill keep spreading awareness and pushing back against that specific policy
6 notes · See All
anxious-witchText

Summary: Xiao Xingchen doesn’t remember anything that happened prior to last year. There are only two things he is certain of: he is a highly skilled thief, and he can trust Xue Yang.

When one of their jobs goes wrong, and Xingchen gets caught by a very familiar stranger, Xingchen starts to doubt even those two things. Song Lan talks like he knows him and if what he is saying is true, how does Xingchen proceed?

Notes: Okay, some of you asked, and I couldn’t stop thinking about it, so I wrote the first part of songxiao amnesia au. Please be careful of the warnings, since this fic is a bit darker than I planned? This is gonna be even more true for future parts if I get around writing them.Oh, and if anyone wants to be tagged in future chapters, feel free to ask. Anyway, enjoy :) 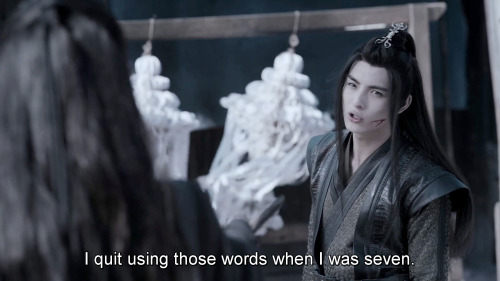 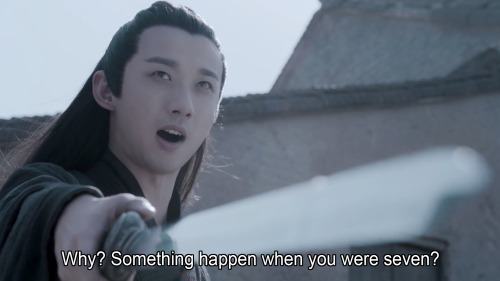 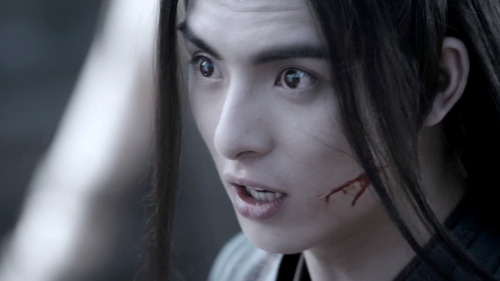 Just some really domestic songxiao to feed my soul 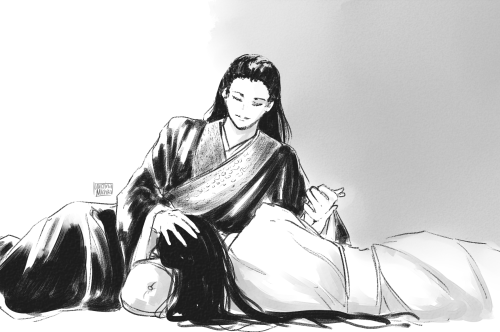 And another thing for the Xiao Sect AU!

Xiao Xingchen and Song Lan did have their big falling out and parted ways, and Xiao Xingchen did give Song Lan his eyes. So far so canon.

But! Meanwhile a still-basically-half-dead Lan Wangji left his sect. Reason being someone was kicking up a fuss about A-Yuan (because it really isn’t that hard to puzzle out that he’s a Wen, what with everything…) and the rest of the elders were seriously considering actually harming him or handing him over to the Jins. No can do. Lan Wangji is done.

So a half-dead man with a toddler and a blind man with a not-actually-blind teenager meet and decide to stick together.

They do eventually find Xue Yang, but since Lan Wangji never had a reason to pretend to be blind and A-Qing eventually ‘fessed up and gave up on it, there’s no reason NOT to describe the stranger’s appearance to Xiao Xingchen.

…Next we meet them, they are camping out somewhere in Qinghe, after they deposited a gift-wrapped Xue Yang on Nie Mingjue’s doorstep. (Even Xue Yang can’t weasel out of that one, so he does die this time.) And this is where Song Lan finds them.

Upon his inquiry about a ‘handsome daozhang in white’ A-Qing leads him to their home - where the first person to step out the door is Lan Wangji.

But no - Lan Wangji tells him that he MIGHT know where he can find Xingchen, but it entirely depends on what Song Lan wants to say to him. Maybe not in this many words, but that’s the grist of it.

…And basically this is how the Xiao Sect came to be.

when song lan brushes his shaking hand over xxc’s coffin and even tho the lid is never opened, we get a close up on xxc’s bandaged eyes and then a close up on song lan’s eyes like FUCK WHY DO YOU HAVE TO DO US LIKE THIS SERIOUSLY

ok but like, how xue yang just kicks song lan? in the chest? With that grin on his face? really makes me think about how song lan like. lived with xue yang as a fierce corpse for like… seven years and we never talk about it. like what do you think xue yang did to him

fuck nothing gets me like song lan hunched over choking as blood just spills into his shaking hand, and then the spray against fuxue and then xue yang’s laugh like fuck

and then?? he looks up at xue yang and he looks scared. like this whole time, he’s been pissed off, devastated, vindictive, but now he looks scared and you know that hurts

im sorry im sorry ill shut up about this soon (I wont) but song lan pauses, hands trembing, clenches his fists, visibly swallows… like could it be any more obvious how gay he is

me: this is the fifth time you’ve seen this. you really don’t have to get so upset about this.

also me, writhing on the ground: SONG LAN IS TREMBLING, HE’S TREMBLING BECAUSE HE’S ABOUT TO SEE XIAO XINGCHEN, HE’S TREMBLING AT THE SHEER POSSIBILITY OF SIMPLY LAYING HIS EYES ON HIS LOVE–

me every time xue yang breathes:

me the second song lan comes on screen:

Check out my new creation:

I’m proud of this

#The Untamed, #Song Lan, #Song Zichen, #i love him your honor, #with all my heart and soul
44 notes · See All
fixaideaText

…Last post was brought to you by a variant of the Xiao Sect AU crossing my mind, where Xiao Xingchen did give his eyes to Song Lan, only they managed to reconnect later, because XXC ran into Lan Wangji before he (they, now) met Xue Yang.

…And after the golden core reveal a very confused and upset Song Lan is complaining to the rest of the sect, because apparently Clan Leader Jiang went over the bend - he grabbed Song Lan out of the blue and kept screaming ‘HOW DO YOU LIVE WITH IT??? HOW CAN YOU LIVE WITH IT??’  in his face for five solid minutes before Song Lan finally managed to shake him off and escape.

It’s only after a worn-out Wei Wuxian Explains the whole thig about the cores that he understands that no, Clan Leader Jiang wasn’t accousing Song Lan of anything, he was asking for advice.

The ideal songxiao dynamic is

Song Lan: help he’s so talented and handsome! But I can’t say anything that would be weird and make him uncomfortable! I will be just SO PROFESSIONAL and HANDS OFF that will help!

2. I wish they kind of did it a little differently.

I don’t even think the Xue Yang turning people into puppets thing was necessary.

I think the story would’ve been just as good if they just focused on the fact that Xiao Xingchen fell in love with his enemy (despite not knowing who he was), and despite Song Lan coming Iike a tornado and obliterating their happy home life to shreds by revealing everything…..

Xiao Xingchen is just angry…..at everyone.

(Except A-Qing, I think he figured out long ago that she wasn’t blind, but played along because he liked having a friend.)

And he’s mad at Xue Yang for obviously deceiving him, but he’s also conflicted because logically, he should hate Xue Yang after all this, but he doesn’t….

And the revelation of a web of lies can’t exactly erase loving someone for three whole years.

And A-Qing did not sign up to witness this soap opera.

But Jin Guangyao has spies everywhere.

So, he’s knows Xue Yang has been playing house with Xiao Xingchen.

And decides…..Xue Yang has become a liability.

He dispatches people to take Xue Yang’s piece of Yin Iron….and take down everyone else.

Xue Yang goes nuts and tries take down everyone by himself….but he falls in battle as well.

And Song Lan escapes, taking A-Qing with him, but now he’ll never get the chance to make up with Xiao Xingchen now.

He tries to uncover the mystery of whoever Xue Yang was working with, but ends up running into Wangxian and the Lan jurors plus Jin Ling and teams up with them to take down the person behind Xiao Xingchen’s tragic fate.