Have A Happy and Safe Thanksgiving 🦃

honestly, not really, i have a very weird taste and most drink i just don’t like, quite sad actually😭

this is really difficult but here are some!(not in order!)

The Theory Of Everything

📝 - Story from your childhood.

✏ - Random fact about yourself.

😷 - Something you hate eating?

🌎 - A country you would visit?

📅 - Favorite time of the year?

And the movie nights are back too…

writing to the void 🌾 chapter eleven

SUMMARY: A series or letters written to Peter Parker, from his girlfriend while he was stuck in the soul stone.

A-N: I honestly just wrote whatever popped into my head, and tried to have it make sense. so like….here’s the chapter.

Honestly, I was not expecting to begin to write this many letters to you. When in reality, they just get shoved into a shoebox underneath my bed for nobody to see. But It hasn’t stopped me from imagining that wherever you are now, you are reading each letter I have written specifically for you. I guess, the reason I haven’t stopped with writing each letter is to cure my feelings and it’s become some sort of a coping mechanism now. Which is odd considering ever since I found out about you disappearing, I went into a small state of denial where I was believing that you’d return and wouldn’t leave me alone in this world. I had simply had hope that it was all a dream.

I had soon felt this hope fizzle out, as week-by-week I stood inside my bedroom, staring. Just staring at the picture frame, I had settled on my nightstand. When i came to the realisation that you were gone, you weren’t coming back. The very photo on the nightstand which consisted of me and you, it was one of my favourites. The day you had asked me to be your girlfriend. I wore a cream-coloured t-shirt and paired it with a pair of denim jeans. You’d given me a heart-shaped necklace to resemble the start of our relationship and I also remembered you promising that you’d stick by my side forever. Or at least however long forever was for us. We both didn’t realise then how short we would have together. And god, I wish that I could go back in time to warn you about the future. If only you hadn’t gone after that stupid donut-shaped spaceship and stayed on the bus, you’d still be here. With me.

Anyways, do you remember? Remember the time when we were still friends, and hadn’t started dating yet. I had just turned twelve years old at the time, and had invited a bunch of kids from our school over for a sleepover. But nobody had showed up, nobody except you, Eleanor and Ned. I remember I had tears trailing down my cheeks as I opened the front door, only to be disappointed that no one else had shown up. I remember you gave me the biggest hug as you guys entered, and gave me that dorky smile I loved seeing on you. That stupid smile you possessed which made butterflies flutter all around my stomach. I then easily remembered how you took me into my living room with others.

You switched on the television and we binge watched all the Star Wars movies that day, in hopes to cheer me up. It worked obviously, and that was the day I realised I had a crush on you, Peter. I had always favoured that memory and cherished it forever. I’m not sure why, but i guess it had to do with the fact that I always loved how no matter how bad the day, you could always make me happy. That was just one of the many things I loved about you.

And now that you’re gone, I am not sure what to do with myself. Sure, I showed a real smile again. All thanks to Brayden, whom I had met a while ago. But the pain of this grief still hasn’t disappeared and I’m not sure how long until it does. It’s almost been a year since you had left, and I feel like I’m still falling apart. And although the road to moving on, can be quite rough. I still feel like there is this massive weight crashing down on me, a heavy weight stopping me from leaving you into the past. Maybe if I just had a chance to say goodbye, things would be a whole lot easier.

I still love you.

the girl who is stuck with only memories.

You ever just rub y'all’s eyes so hard that you enter some alternate MIB galaxy with mad colors and swirly crap??? 😅💀👀🙈

@ hornyboy boooo get off the stage- bad joke!

🎒 the backpack boy himself 🎒

I’ve been on a huge Spider-Man kick recently, well more so than usual. I’m so happy with how this turned out, it was one of the bigger projects I’ve worked on. Backgrounds aren’t my strong suit, but I know I’ll only get better the more I practice. 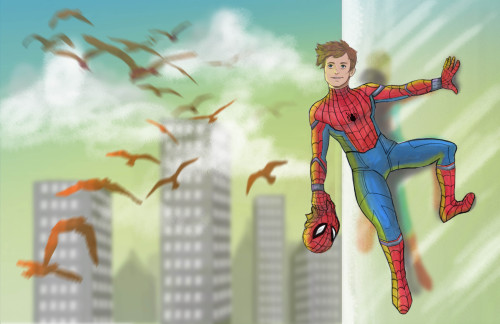 So…… This is a marvel x Harry Potter crossover. It’s barely noticeable, and is featured in a Spiderman comic issue, I don’t exactly remember which.

Natasha: How many children do you have?