I can’t tell you why but i have the urge to sew and paint a sweater that looks like Geralt’s ab armour.

I have yet to decide if the idea is extremely stupid or actually a bit cool.

#the witcher, #geralt of rivia, #would it be a bad decision?, #i do trive on bad ideas so..., #i’ll see if i find the time, #got some sketching to do first
0 notes · See All
dhwty-writesPhoto

I’ve really been enjoying Good as Gold by @witcher-and-his-bard and I finally gave in and drew Jaskier in the infamous robe and thigh-high boots.

Let’s say it was… a journey. I’m not really fond of shadows and highlights, so this is really far outside my comfort zone. But I’m really proud of this, actually! I also wanted to do a background, but motivation kinda left me… 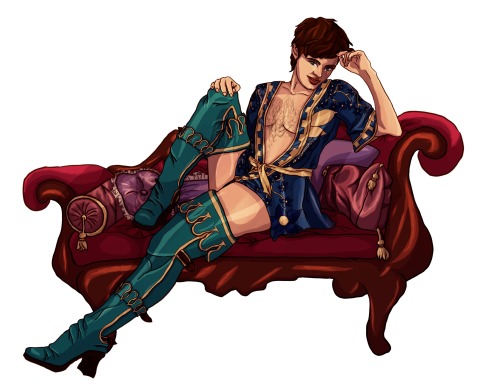 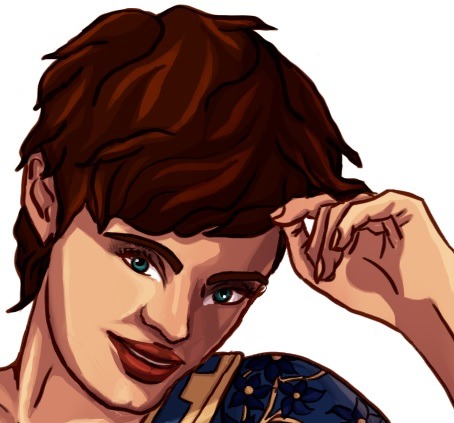 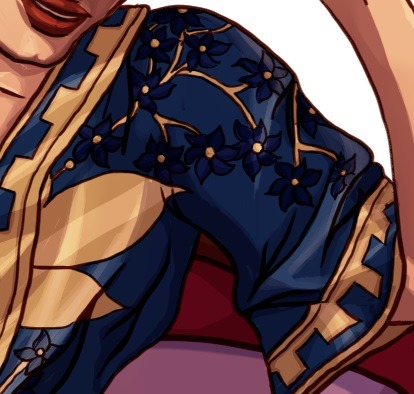 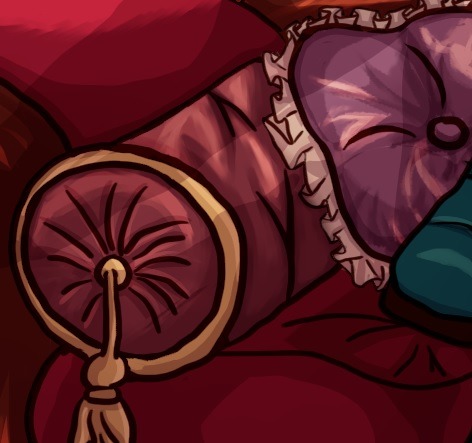 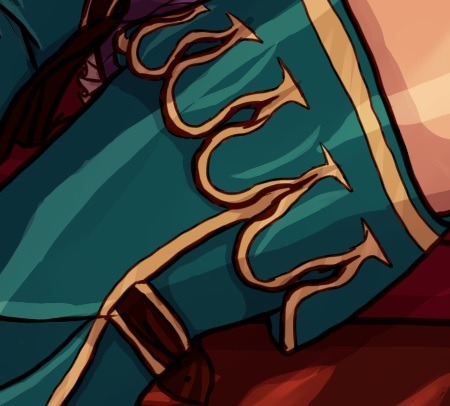 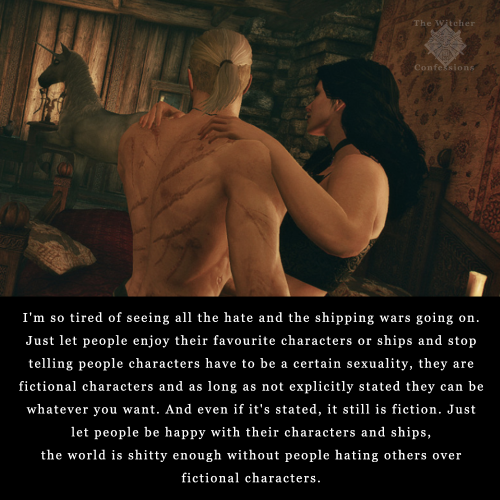 i had a dream (which was not a dream at all), a Geralt/Emhyr Saovine story.

On Saovine morning, Emhyr is given a report detailing strange activity in the bogland an hours ride from Nilfgaard city. Not wanting to alert the packed out city, Emhyr asks Geralt to investigate for him. Even after decades as a witcher, nothing could have prepared Geralt for the darkness he meets and all that it shows him.

As the eclipse reached its totality the ground below Geralt’s felt began to shake, rumbling low and sinister. His medallion began to twitch wildly against his chest. The wraiths stopped attacking, turning towards the stone circle. In the dim light, Geralt could see the cult members had stopped moving, their chant reaching a fevered peak, the cry sounding like a beseechment before they all fell to the ground, the wraiths also disappearing as if they’d never been there to start with. It was unsettling, a cold tendril of uncertainty wrapped its way around Geralt’s stomach.

The shaking intensified and Geralt had to work to keep his balance as the rumbling grew so loud it hurt his ears, the scent of ozone filling his nose, so strongly Geralt gagged. He sheathed his sword and fell to his knees, the overload on those two senses too much to bear, and started to crawl away from the stone circle, hoping the distance would help.

The ground felt oddly warm beneath his knees and gauntlets. Sweat dripped down Geralt’s forehead and back. His arms ached something terrible, they shook as Geralt forced himself further away, teeth gritted against the pain and nausea. Thoughts of knocking back a potion crossed his mind but Geralt wasn’t sure he’d be able to keep it down.

With one last violent jerk that sent Geralt sprawling onto his back, legs landing in one of the puddles that littered the bogland, the ground stopped shaking and the rumbling finally stopped. Geralt stared up at the still dark sky, panting and confused, very sure the eclipse should have moved from totality into its fourth phase.

His medallion twitched so hard it hit him in the face. A breath later, Geralt was hit with a wall of magic so strong, he passed out.

Ok, I don’t know if anyone has thought about this, but hear me out: a The Witcher Mamma Mia AU!

Imagine Ciri’s engaged when she finds out an old Geralt’s journal about his adventures and the stories about two beautiful mages, Yennefer and Triss, and a handsome bard, Jaskier, then she decides to invite them to the wedding in secret (so Geralt wouldn’t have a chance to run away), hoping one of the romantic trio is the one The White Wolf is still in love with to this very day.

I doooo! I’m in the middle of playing the third game (I haven’t played the other two but it was on sale w dlc included) and I’ve watched the first season of the Netflix series. I haven’t read the books but I’m tempted to just to better understand the world it all takes place in. Jaskier in the show is blatantly my favorite character 😅

#it's not because we're the same person or anything lmao, #the witcher, #inbox
0 notes · See All
arreloiText

Inktober and also a monster for @sordidsaovine

#the witcher, #calanthe x eist, #apparently i wrote this in late march and then completely forgot about it???, #WHAT EVEN IS THIS, #screams into the void
1 notes · See All
damatrisText

Hey, quick question Netflix. Just how are you going to handle Cahir’s storyline in the future seasons??? After reading the books Netflix!Cahir doesn’t make sense.

So this is an unused (and less angsty) extract from You Set My Heart Ablaze which is my modern teacher!Jask x fireman!Geralt AU. @elliestormfound requested to see the happier version! Geralt had visited the school earlier that day to drop off Ciri’s lunchbox.
_________

Jaskier bumped his head against his desk a few times in frustration and then a thought hit him like a train.

The stolen moments after school, the emails, the phone calls and coffee shop dates.

They were fucking dating.

And no one else had thought to let them know! He scrambled for his phone and dialled Geralt’s number. To his surprise the man actually picked up.

“Oh shush. It’s important.” He said with a wave of his hand, forgetting that Geralt couldn’t see him.

“She’s fine.” Jaskier rolled his eyes. “And she didn’t starve thanks to you.”

“She wouldn’t have starved.” Geralt scoffed.

Jaskier smiled dopily at the amusement in Geralt’s voice. “You know, dearest. Something rather amazing just occurred to me.”

Geralt hummed thoughtfully on the other end of the line.

“You and I, dear heart, are dating!” He announced happily.

It should terrify him. They really weren’t allowed to date but he was tired of fighting it. He adored Geralt and he just knew that Geralt felt it back and everything they’d done so far under the guise of friendship, well, bollocks to that.

Geralt was laughing on the other end of the phone and Jaskier pouted.

“I may be a little out of practice, Jask, but I’m pretty sure you’re supposed to ask first?” Geralt’s voice was oddly gently, a rare occurrence for the gruff fireman.

“I did!” He insisted. “I asked if you wanted to hang out after parents’ evening!” He pointed out.

“To talk about Ciri.”

“Well we couldn’t have everyone else knowing. It had to be a secret.” He paused. “So secret that even I didn’t realise.” He added.

“And you’ve asked me out for drinks twice now,” Jaskier continued.

“You tried to reject my offer.” Geralt pointed out.

Jaskier crossed his arms across his chest. “Well I didn’t know we were dating then.”

Geralt chuckled. “What about…”

“Me being Ciri’s teacher?” Jaskier finished. “Yes. Well. That is not ideal but Stregobor is gone! I’m on good terms with Tissaia. That being said it’s probably best to keep it all on the down-low until the summer holidays.”

Jaskier’s heart skipped a beat. Of course Geralt would still want to ask. He was strangely traditional like that. Even though Jaskier was absolutely right about the fact they were already dating, Geralt would want to do this the right way.

“Of course, dear heart.” He cooed into the phone. “Anytime, any place. I’m yours.”

This fic is written for Whumptober2020 prompt:
No 26. IF YOU THOUGHT THE HEAD TRAUMA WAS BAD…
Migraine | Concussion | Blindness

More tags and warnings in AO3

Waking up doesn’t make it better.

It makes it worse.

So much worse Jaskier hopes he could fall asleep again but when he tries the pain brings him back to wakefulness time after time again until the sun peeks through the trees and all Jaskier wants to do is bury himself under the blankets or perhaps underground. Anywhere where the light doesn’t reach him.

He doesn’t want to deal with this.

If it was some kind of weird religious thing, it was for a god Geralt had never heard of. Probably it was just a weird Jaskier thing. Crows, of all creatures! Corpse eaters. Grain stealers. No one liked crows. But Jaskier was voluntarily traveling with a Witcher; maybe he just had poor taste.

Geralt is just a hopeless bisexual Tsundere pass it on 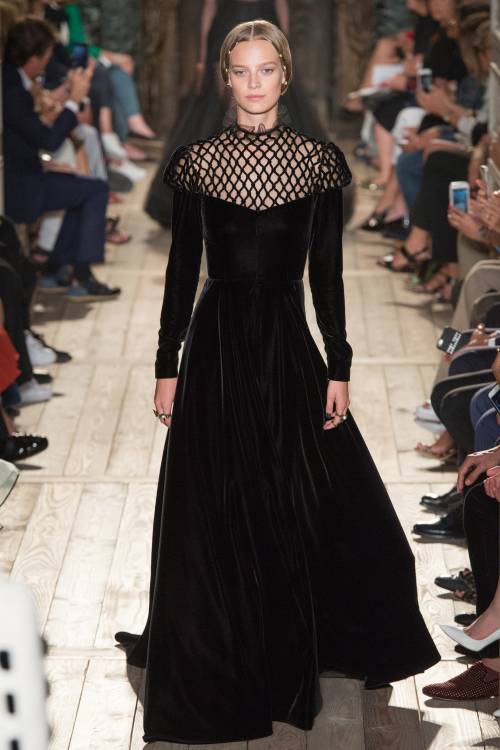 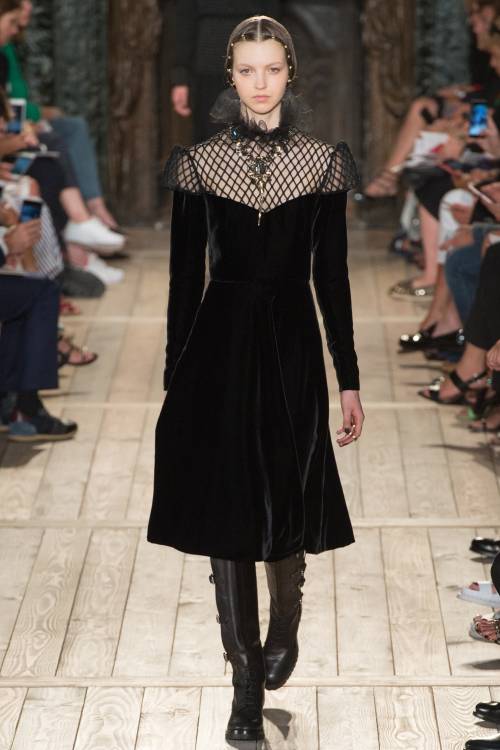 Jaskier: If I punch myself and it hurts, am I weak or strong?

Yennefer: You’re a fucking dumbass, is what you are.

Part 22 of the modern texting AU

Just wait for it. I’ve been looking forward to this. :D 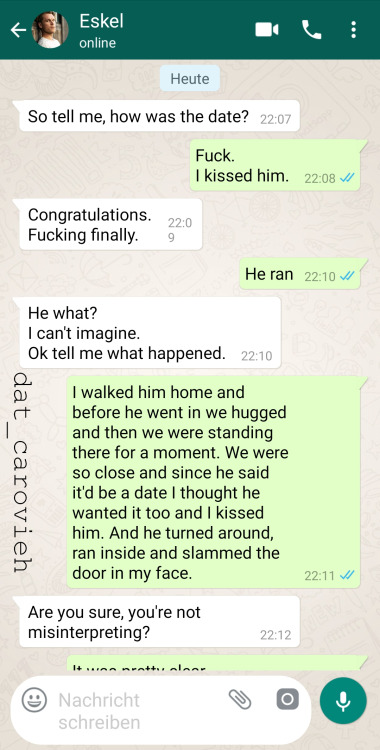 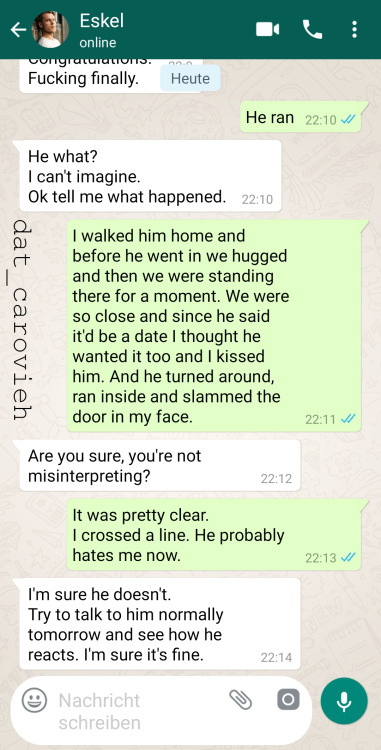 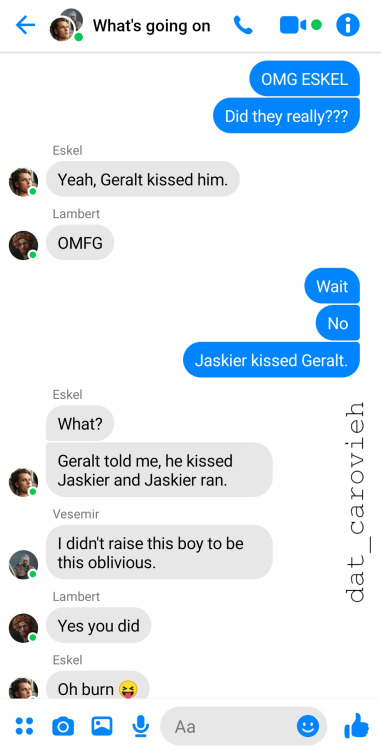 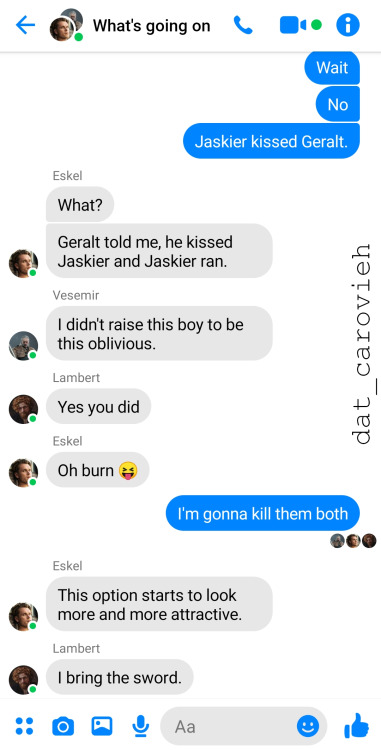 THANK YOU for asking!!! I’ve literally been vibrating with hope that someone would ask me questions.

So first of all, I decided that they aren’t in fact able to partially shift. It’s all or nothing, even if they would be super cute as partial wolves. :3 the way I see it is that the two halves of their beings exist simultaneously, but they can’t exist together. Like two sides of a coin!

About Lambert and Eskel: They aren’t Dire wolves, they’re regular wolves!! Eskel is a big black wolf and Lambert is a white and grey wolf. Same with Vesemir. Geralt is a dire wolf because of the extra mutations!

Other Witchers transform as well, but they can’t communicate with other species as animals. So Cat Witchers tranform into Mountain lions, Bear Witchers transform into uh, bears, and vipers turn into vipers. Letho, despite being large and buff and such, still turns into just a viper! Griffins are the big one I’ve been thinking about recently— the idea of Coën turning into a Griffin is really fun.

I have several more thoughts on this AU still, just so you know. I have this whole thing about how Muto isn’t actually a sign and it’s more like a way to ground yourself, and how Witchers who go through the Trial of the Grasses deal with the sudden whole new side of themselves.

#the witcher, #my writing shit, #Shape-witcher!AU, #shapeshifter Witchers, #asks, #lookoutrogue, #THANK YOU SO MUCH, #Please feel free to come back :3
1 notes · See All
seainspacePhoto 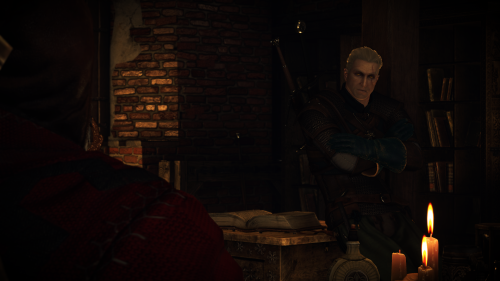 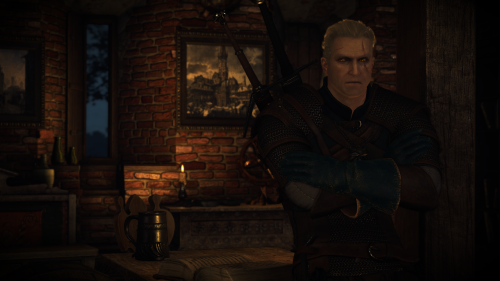 You know, I hope we get to see Fringilla with her natural hair down in season 2. I have no idea if she’s confirmed to be there or not, but I love her curls. When she came on screen with her hair tied back I got so annoyed, the actress has such a lovely face and her hair is beautiful.

#the witcher, #season 2, #yes i know shes the bad guy, #do i care?, #no, #she has beautiful hair, #actors, #characters of color
2 notes · See All
rubyredwispPhoto

The Witcher Appreciation Week | Day 6: Favorite Quote
I’ve lived two or three lifetimes already. But you haven’t been satisfied in any of them. I’ve tried. But I’ve no legacy to leave behind. No family. It’s time to accept that life has no more to give. You still have so much left to give.

#thewitcheredit, #witcherweek, #the witcher, #yennefer, #edit1, #it's hard to pick one fav quote
77 notes · See All
Next Page