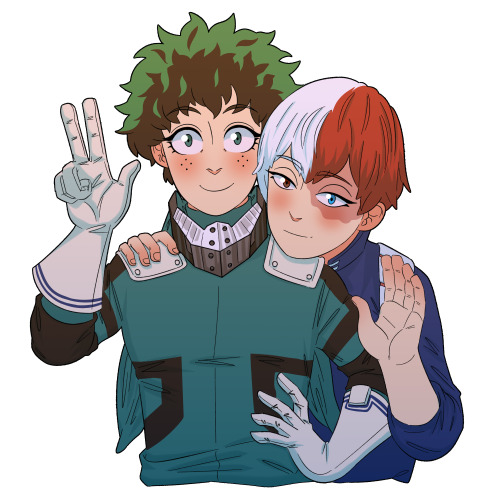 Midoriya: We really should tell Aizawa and All Might about us.

Midoriya: I don’t like keeping secrets from All Might, and Aizawa is our teacher… I mean, we have been seeing each other for months, and-

*The couple walks into the teacher’s lounge.*

Midoriya: *red faced and hiding behind Todoroki, whispers* Why did you do that so bluntly?!

Todoroki: You were betting on us?

Aizawa: Don’t let it go to your head. We have bets on all of you.

#THEY WON'T BE FINISHED TIL TOMORROW BUT ALL OF THE LINEART IS DONE, #I'm excited I LOVE drawing smooches, #Shima speaks, #Tododeku, #BNHA, #And they're all AU doodles eheheee, #One for each ;), #Even Bottled Soul ;)
68 notes · See All
ladysunamireadsText

Kill Me a Little Less Painfully
by Prumery

Shoto Todoroki gets what he wants when he wants. Drugs, Alcohol, Women, anything and everything is at his hands. It should be that way because he deserves it. He’s THE Shoto Todoroki, and the world is whatever he wants it to be.
That being said.
Why does Midoriya ask if he is okay. Why is he asking all these questions. There’s nothing wrong with him, there’s nothing wrong with his life, he’s fine.
He’s fine.
Midoriya is just his stupid bodygaurd. Nothing else.
He is nothing, unlike him. Unlike Shoto Todoroki, the Heir to the Todoroki company.
Midoriya Izuku is no one compared to Shoto.
So, why does it feel like Midoriya pities him?

Here is a collection of one-shots featuring everyone’s loveable and sweet cinnamon roll, Izuku, healing people with not only her quirk but her heart as well!

Todo: I put a little note in your bag to tell you I love you.

I tried to recreate my shitty Todoroki drawing in mspaint and this is how it turned out :)

Learning to overcome
by Imthealpha96

Midoriya Izuku is shaken up after the attack on the USJ. After healing, the school announces that the kids will be moving into a dorm rooms, and they are paired with a roommate. Izuku struggles with nightmares, anxiety attacks, and a slow devolving addiction to his medication. Can his roommate Todoroki Shoto help him before he loses control?

#., #FFN Feed, #FanFiction, #FFN Tododeku, #♥, #Tododeku, #BNHA, #🐰❄️🔥, #R:M, #A:Imthealpha96
1 notes · See All
redyarnsAnswer
Hello! I've been reading the weeping angel and I loved it! (Super duper fluffy and soft) Btw, since you're open to requests on writing stories. Mind if you make a tododeku one where Shoto wakes up from a nightmare and Izuku is there to comfort the poor bean, flashing foward to a few years later when both of them are pro heroes Izuku in turn has a nightmare (could be anything) and Shoto comforts him like all those years ago? If you don't mind

hey there! of course i can, and thank you so much for reading my stories!

Shouto woke up feeling like someone was holding him underwater. He couldn’t breathe, couldn’t hear, couldn’t think - he grasped as his throat, choking and gasping hoarsely before he realized that someone’s hands weren’t closing around his neck, strangling him. They were instead stroking his hair and back, gentle but firm, and he sagged into the body next to his.

Shouto looked around him, realizing several things. For one, they were in his dorm room at UA - he’d forgotten himself for a moment and the neat clutter of his room was slowly becoming recognizable to him. The lights were off but the drapes on his windows were drawn back to reveal the pale moon, lazily filling a small section of the bed with light, and Shouto turned his head to look at his boyfriend.

Izuku was beautiful as always, but there were dark bags underneath his eyes along with his freckles and Shouto immediately felt guilty. They’d only been dating for three months and had tentatively decided to start sleepovers in the same bed a week ago. Shouto hated more than ever that his nightmares were such a problem; he despised the tired look on Izuku’s face, the worried lines between his eyes, and how the other boy absolutely refused to go back to bed until he knew Shouto was okay.

Shouto both loved and loathed him for it.

He didn’t like that he had to subject Izuku to his problems, not when the issues were so deep and twisted that Shouto couldn’t even decipher them, couldn’t - couldn’t -

Izuku stared at him, almost glaring, and the fire of determination in his eyes reminded Shouto why he loved him so much in the first place. All his life, Shouto had been afraid of flames, a harsh and ugly reminder of his father and the cursed mark on his face that he had to carry. Despite that, the fire in Izuku never burned Shouto - it was like a warm embrace, the smell of eucalyptus, and soft kisses to his nose. It was Izuku, and Shouto leaned in, suddenly aching for him so much that he could barely breathe, and Izuku didn’t hesitate to wrap his arms around Shouto’s shoulders and his hands into his hair.

“That they say stardust runs through our veins?” Izuku whispered, and it should have been ridiculous, the situation. Shouto’s clock was telling him it was three forty-five in the morning, they were both exhausted from the previous day’s training, and yet there they were, clinging to each other in Shouto’s messy bedroom like nothing else mattered.

“Go to sleep, Shoucchan,” Izuku whispered, brushing his thumb over Shouto’s jaw. Like always, he didn’t ask what the nightmare was about, didn’t push Shouto past his limits. Shouto wanted to kiss him until they both couldn’t breathe. “Sleep with the stars.”

Shouto snuggled closer, breathed in deep, and believed in Izuku.

Or someone had taken a hot, searing knife and was insistently (and quite rudely) jabbing him in the stomach over and over.

It was this unpleasant thought that made him start opening his eyes - his eyelids felt like they were each a thousand pounds, and for a moment he stopped, trying to keep from throwing up when he realized that the more he tried to blink, the more nauseous he became.

Slowly, though, he woke up, and was nearly blinded by the abhorrently bright white of the walls. He couldn’t move his head, his neck feeling like a giant, swollen brace rather than his actual neck, but the white dots in his vision were slowly blinking away and he squinted around him.

He inhaled deeply, feeling a slight uncomfortable squirm in his chest as he realized that he was in a hospital. He glared at the vase of roses sitting on the windowsill - the flowers themselves were beautiful, warm and soft in the light of the sun, but they were also white roses, which he bitterly knew were definitely not good in a hospital setting.

Shouto stared, realizing that the weight on his leg was not from some weird aftermath of the battle he was just starting to remember, but because his lumberjack of a husband was there, snoring and mumbling to himself. Shouto’s leg was falling asleep, not that it was a surprise. His husband was unfairly tall and muscled, something that happened during their third and final year in school, shooting up like a weed but also filling out.

Shouto would have been jealous if it wasn’t for the fact that he loved he could bury his face in Izuku’s chest and that his husband had to bend down to kiss Shouto’s nose like he always did before bed time.

Shouto startled slightly, wincing as he accidentally moved his bandaged stomach, and wow Izuku looked like a disaster.

His husband’s normally tanned and grinning face looked like he hadn’t washed it in days, there were bags near black underneath his - oh. Shouto watched, stunned and more than a little alarmed as he realized that those were big, globby tears running down Izuku’s cheeks, his eyes dark with his emotions and his skin turning into a rather unbecoming shade of red.

“You’re okay,” Izuku sobbed, and Shouto knew his husband well enough to recognize the way Izuku was cradling his cheeks, sobbing like he couldn’t control himself and his hands shaking tremulously.

“You had a nightmare,” Shouto said, quietly and scratchily.

“You almost died,” Izuku cried, out of breath. Shouto couldn’t help but look at him fondly - Izuku wasn’t an elegant crier, far from it, but he still looked breathtaking like this, and Shouto wished he had the strength to lift a hand and take Izuku’s own.

“You were in the hospital just last week,” Shouto said dryly.

“But,” Shouto said as loud as he could, cutting off his husband, “there’s one bright side to this.”

Izuku stared at him incredulously. “What?”

Shouto smiled faintly. “I don’t think the nurse will get mad if number one pro hero Deku smashed that vase of roses, would they?”

Shouto laughed too (well, as much as he could, anyway), and when Izuku leaned down to rub the tip of his nose gently with his own while giving him butterfly kisses, Shouto could only hum and smile even more.

(As it turns out, the hospital didn’t get mad at them for Izuku accidentally throwing the jar of roses out the window, which only proved Shouto right.)

this….. turned out a lot longer than i expected. i hope you enjoyed, nonetheless!

Here’s my take on a draw the squad post linked below.

“Oh,” Shouto paused as he fidgeted in his spot, mind pondering as he takes a tighter grip on Touya’s hand.

“Do you like-like Keigo?”

Touya sputtered as he tried to hide how flustered he was. “W-What the fuck are you talking about? Don’t you like-like your Izuku friend?” Touya lets out a huff as he let’s go of his little brothers hand.

Series: Part 1 of Chronicles of the Two Todoroki Brothers