*pencil rolls off of table*

Tony: should i be worried, or…?

Steve : why are we here

Peter dropping down off the ceiling : now that i have you all here…

Peter opening powerpoint : this is why i should be allowed to get a puppy

If I had a nickel for shipping m/m ships which involves my favorite character who happens to be a former college professor to a guy whose good with cybernetics and suffers from crippling trauma, I’d have two nickels

Which isn’t a lot, but it’s weird that it happened twice.

Series: The Rise of Thanos, The Fall of Loki, Sister Agents.

Warnings: Tony and Iris are DRUNK!

Iris awakes alone on her 2nd wedding anniversary. Clint having gotten his dates and timezones confused, and rushing off in the wee hours of the morning with Pepper.

Tony, her best friend, joins her in drinking all day, and the pair start fighting over who would win in a fight, Peter Pan, or Santa Claus,

Iris sighed when she woke up alone in bed yet again, rolling over into the cold part of the bed where her lover should have been. Where he’d crawled into bed and wrapped her up in his arms the night before. She frowned when the cold sheets embraced her skin.

“Agent Barton and Ms Potts had to fly out to Tokyo for an emergency meeting a few hours ago.” Iris sighed, ever since Happy had taken a well deserved vacation Clint had been attached to Peppers side, taking the role of her personal bodyguard before Tony could even accept the fact that Pepper had allowed the man a holiday.

Iris shouldn’t complain, it was satisfying his itch to be out in the field, and Tony was paying him more than Shield ever could. Clint was as close to Pepper as she was to Tony, and it was no surprise that he’d chosen to stand in and protect her like he had so many times before.

Peter: is anyone else scared?

Tony: not really. i’ve already lived longer than i expected to

Old drawing of an old RP I once did with a friend. Something with Iron Man and an OC Rainbow Dash. It still looks kinda cool so I decided to post it here anyhow. 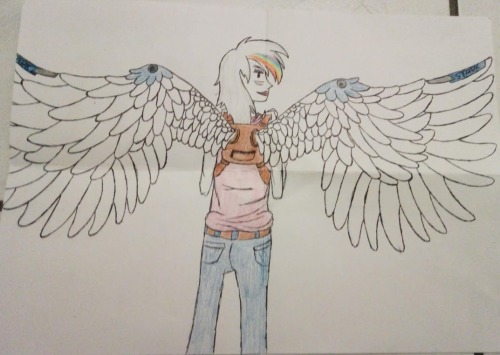 A hostage, then. Not how he’d expected this game to be played, exactly. He always thought he’d just be killed, although that was before what happened on the roof, however long ago it was.
Before…. no.
He scrambles to untangle his hand from the blankets covering him, rolling up the too-long sleeve draping his arm and staring at the word that now looked to be inked in black on his wrist.

Notes: Let me know if anyone wants to be added to the taglist for this!

Peter is having a terrible dream.

It starts off well. He’s flying – or, well, as close as he comes to it, swinging through the streets of Queens. The adrenaline is pumping, strong and steady, through his veins, fresh out of a fight with the latest jerk he’d come across. It’s exhilarating… at least it is until the web he’s swinging by snaps, and the ground surges up to meet him.

He’s sure he doesn’t land on his head, though the fall is a blur, but somehow when he comes to, it’s his neck that hurts. It doesn’t add up… until he realizes exactly what was wrong with his dream, and the memories come surging back as his eyes fly open.

prompt 55: How are you feeling

After a one night stand during a trip to America, Inko finds out she’s pregnant.

Written here are snippets of how that pregnancy went, as well as snippets of Izuku growing up from Inko’s perspective.

After of the implosion of the Avengers, Steve follows behind Sam as Sam works on giving back to the community completely at home in his new role. Steve doesn’t know what his role is and struggles with his past decisions as he tries to find the motivation to keep moving forward. Reaching out to Tony seems like a place to start.

Y/n Stark was a secret. She had been one since before she could remember and she loved it. It made her feel special, like it was a privilege for people to know her. She had close relationships with the few people who knew her and she treasured them deeply. She liked pretending to be a spy, sneaking around the house and avoiding being seen by anyone she didn’t know. It was fun, almost like a game.

Of course there were some downsides of being a secret too. She had to stay on the property, which meant no public school and no outings with her father, although Happy and Pepper would sometimes sneak her out for supper. She also didn’t have many friends her age, but she didn’t mind that as she didn’t play as much as other kids, preferring to learn or build stuff with her dad.

So im deff doing Stark, but should I do Natasha, Nat, or Romanoff for the other one?? I cant decide what sounds good but also would be appealing to others?

somebody write an au fic where peter has the powers of saitama from one punch man aswell as the webs and spider sense. and hes just. going through life.

can you imagine all the avengers and various heros trying their best to keep earth and the universe safe and then this fucking anonymous ‘spiderman’ comes up and defeats everything in under 10 seconds with one fucking punch.

S.H.I.E.L.D tries to catch him but literally nothing works and they eventually give up

he has really dry humor but is constantly making sarcastic comments

not even natasha can land a hit on him

they’re all so fucking confused

then peter and tony become friends

and they find out that this unstoppable absolute BEAST. is a FUCKING 16 YEAR OLD IN HIGH SCHOOL

THEY WOULD FLIP THEIR S H I T

NOBODY CAN GET CLOSE TO HIM

'so…. why a glove? i mean… you could use the gems in anything. so why a glove. isn’t it a little overused?’

everybody just kinda watches as thanos tries to kill spiderman

but hes dead before he can open his mouth.

Tony: This is your post bachelor party survival text. This is a free and complementary service to make sure you are still alive. For alive, say yes. For hurting, say ugh. If lost, say help. If dead, please feel free to not respond. Thank you and we hope you enjoyed the party.

July of 2015 started off with a bang. Several, actually. Huge ones. The fourth of July celebration at the Tower went off without a hitch, even considering you’d asked really late in the game for it to be put together. But anything that helped the general public with their consensus that not only superheroes were a good thing but that Stark Industries was a good thing- that you were a good thing… greasing the wheels didn’t really hurt. You also established a block party zone for restaurants to give out free tastings and booze (all paid for by Stark Industries, of course), and blocked off watching spaces far enough away.

It was wonderful, really. Everyone had a good time. The papers the next morning were mostly all going on about the spectacular displays (some of which were Avengers themed, of course) and the happy faces. Mostly though, this was tempting fate. Something you and Tony found out the very next night.

A Sunday.
You’d just left a restaurant in Poughkeepsie after a small business meeting. It was hot. You were a little tipsy. And a woman was waiting right next to your car in an otherwise very empty parking lot.

She uncrossed her arms and gave Tony a wide smile. Alarm bells were ringing in the back of your mind. Tony’s, too, as he put an arm around your waist and halted a few feet away. “Can we help you?”

“I imagine you can.” Her tone was polite but coy. Not something that soothed your nerves.

Especially not when she reached into her jacket. Quickly you put a hand up, not that it would have prevented something terrible from happening. Not as immediate as a repulsor blast, anyway. “Let’s not do something stupid.” You didn’t sense something that off about her.

But she hesitated, nervous suddenly. …perhaps it wasn’t wise, after all, to startle Team Iron in a parking lot after dark. She stopped moving, considering her options. The both of you were on edge. If she had a weapon, she was rethinking pulling it. But she edged the top of her jacket back just a bit to reveal papers.

That was when your hand dropped. And she pulled them out all the way. “You are hereby ordered to appear before the United States Senate.”

Even though you weren’t looking at him, you felt the roll of Tony’s eyes. “Gee, this seems awfully familiar.”

Summary: Steve is looking for his keys. His two partners aren’t very helpful.

Read below or on AO3

“Hey Tony, have you seen my keys?” Steve asked. He’d thought that he’d left them in the jacket of his brown leather jacket, but they weren’t there. He looked around at the counters in the kitchen, hoping to find them. Why they would be in the kitchen, he didn’t know, but at this point he would be happy to have them at all.

So that was a no on whether or not he’d seen them. Probably. Sometimes Tony liked to give him a work around like this and then reveal that he’d had them in his hand the entire time. "Because I have places I need to get into that have locks."

"The Tower doesn’t use keys."

That much was true. The Tower had keycards and badges for normal people, and facial recognition for the rest of them. "I have an apartment in Brooklyn. I know you know about it because you’re the one that bought it for me."

"And I still think it’s unnecessary. Leaving me and Loki so soon? And here I thought you’d be able to last another two weeks."

"Are we taking bets on how long we’re going to last?” Loki asked, appearing so suddenly in the doorway that Steve wouldn’t be surprised if he’d used magic to do it. “I’ll take whatever day Tony said plus two days."