This fandom is wild. 『And I’d have it no other way.』 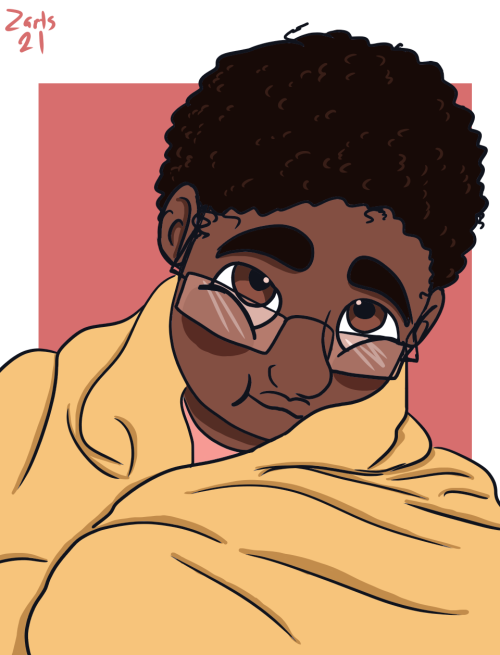 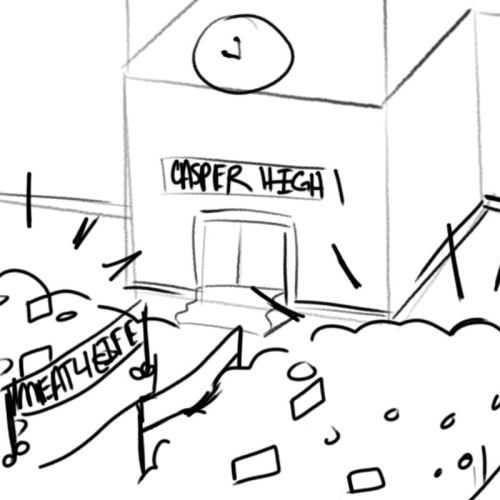 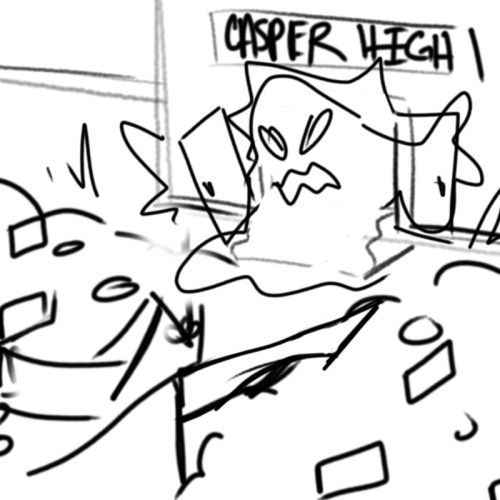 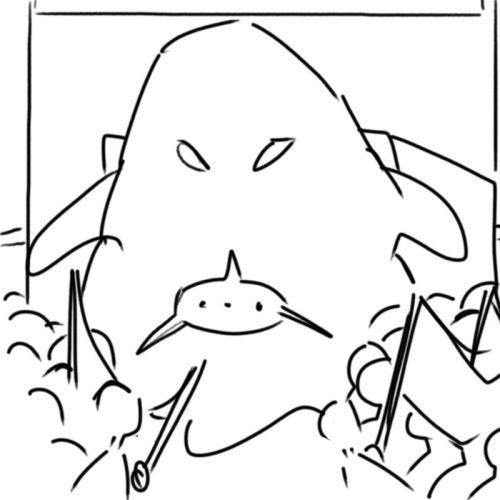 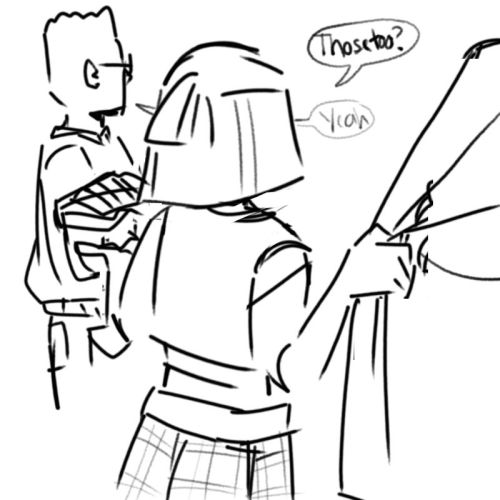 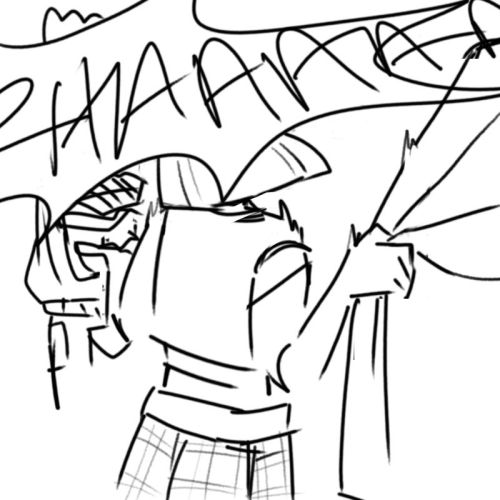 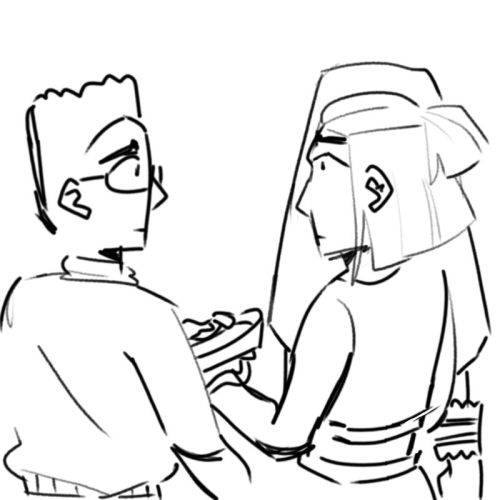 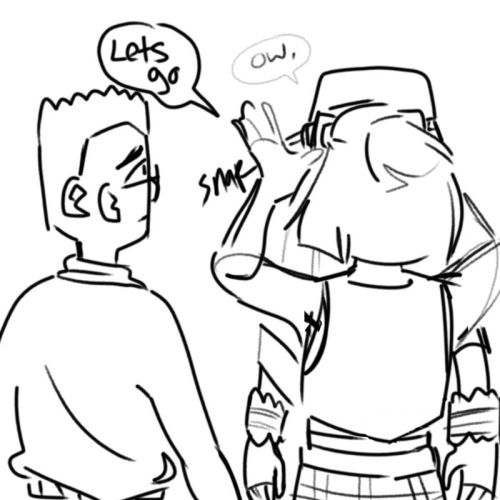 The unusual struggles of an everyday phantom who faces situations between comical and emotionally deep.

“Hey guys,” Sam smiled warmly at her two friends as she shut her locker. “How’s it going on your end?”

Danny didn’t look directly at her, but muttered a “hey”.

Tucker snickered next to him. “Oh, I think Danny is having the time of his life!” Danny elbowed him in the ribs, “Ow! Hey, I even used a life or death pun for you!”

“That bad, huh?” Sam laughed. “Can’t say I’m doing any better though. By the way, Danny, I’m going to have to…warn you about a few things. Your secret is still safe, but there’s still going to be gossip about you. Both of your halves.” Sam shut her brain down before she went back to that fantasy. “Sorry, I really tried. The girls at this school are indubitably so fucking stupid, they wouldn’t know what the actual truth is, even if it bit them on the nose. Honestly, how they even made it to twelfth grade is beyond me.”

Tucker noticed Sam getting all worked up and frowned. “Hey, the day’s almost over though!”

“Huh? Wait, what do you mean gossip?” Danny finally looked up at her.

“Ugh, Paulina has some twisted thoughts.” Sam rubbed the sides of her head as she tried to calm down. “She’s been the biggest pain in the ass all day. Just be prepared for any gossip that Phantom flies commando, and know that I tried to stop it.”

Danny’s eyes went wide, “why would they-?”

Tucker busted out laughing, “You HAVE to tell me how that happened!”

“Ugh guys, please not now.” She grabbed each of their shirts and pulled them towards the cafeteria.

“Man, I wish I had my PDA! I hate being out of the loop!” Tucker complained.

Sam unpeeled her banana, trying to ignore any innuendos and return to normalcy, as she listened to Tucker’s bellyaching. She took a large bite as her stomach growled. If Skulker hadn’t shown up on the way to school, she probably would have been able to actually grab some breakfast before this whole ordeal. Sure, she had a salad waiting for her, but that wasn’t going to cut it today.

“Damn, look at Manson deep throating that banana like a pro!” Dash quirked. Danny snapped his head to look over at Sam. Oh god. Woah…wait NO!

Without missing a beat, Sam chucked her half eaten banana at Dash, hitting him directly in the face. She smiled proudly as Tucker chuckled next to her.

“Nice shot, Sam!” Tucker held his hand out for a high five, which Sam returned. Dash made an attempt to take a jab at her, but Kwan stopped him. Kwan had to protect both of his “best friends”, after all.

Danny was silent, unable to comprehend his enjoyment of Dash’s misery at Sam’s behalf. That’s my girl, he had thought. Ugh, why? Why did he keep coming back to this? Sam is just a friend. Dash’s dumbass comment just stirred the pot even more. Now Danny had a new fantasy about his best friend to worry about. He looked over at Sam again and blushed before quickly looking away. With the amount of times he’s blushed today, he didn’t think it was possible anymore. And what is she talking about with all these rumors?

Nickelodeon can read our minds 😭

Cujo
-pitbull puppy
-Danny’s unofficial pet after they met on the street and Cujo died
-Has neither powers nor a single thought between his ears
-Loves to be picked up and given treats though
-Danny has a dog bed set up for him when he ambles into his room, but Cujo almost always sleeps on him instead
-Danny babies Cujo and is his #1 apologist when Cujo’s gotten into trouble

Lilith
-black shorthair cat
-one of those cats that perpetually looks teenaged; think blueberry
-technically Ida’s cat, but Sam dotes on her so much that Ida doesn’t mind if Lilith prefers Sam’s company
-Lilith only responds to that name, so whatever less-goth name the other Mansons picked for her went amiss
-Ball of energy, most of it nervous
-Doesn’t like ghosts– will stare at Danny when he comes over with her ears folded back
-not allowed on the couches so she just sits by them and sulks
-Jeremy loves her, Pam is dubious, Ida’s just happy Sam has something to devote her love to

Herbert
-red-eyed dilute rat
-for whatever reason when Tucker was 13 all he wanted was a pet rat so Herbert was his birthday present
-named after the guy from ReAnimator
-has a setup that would frankly put PetSmart to bloody shame but is Always escaping
-a case study in hubris; going to get himself killed one day because he’s constantly trying to eat shit he shouldn’t (i.e. desserts, wires)
-Maurice Foley’s personal archenemy. Maurice Does Not like mice/rats/anything like that, but puts up with it for Tucker.
-“with my brain small, my meat huge, my pain endless, i tread onwards” -herbert probably

Precious
-brown short-haired Chihuahua
-a Christmas present for Dash when he was younger
-SPOILED
-Dash immediately threw himself into researching pet care as deeply as he could, so he has a lot of Opinions about the bad rap small dogs get when people don’t respect their space
-Sweet and intelligent; always very happy to play with Dash
-Dash gets adorably self-conscious because he’s so big and he’s afraid he’ll hurt her
-Once he was walking Precious and he saw Phantom playing with his own dog and they introduced their dogs to each other(!!) and Dash just thinks it’s really nice that Phantom can have a dog he loves too

Maja
-Oriental longhair; think Pangur
-“Vlad’s sister’s” cat (Vlad doesn’t have a sister)
-Even more spoiled than Precious
-Instead of Danny negging him into getting a cat, Maja’s there pretty much the whole series
-Is the only thing Danny likes about staying at Vlad’s house
-Quiet and dainty most of the time, but can and will scream for pets/ice cubes/etc
-Exclusively eats off Vlad’s plate; refuses commercial cat food
-Bunts Vlad’s face while he’s laying down reading so he’ll give her kisses
-Sometimes Vlad brings her to the office to stroke her back Bond-style during meetings

For the past few months I’ve kinda of got into the Danny Phantom fandom (the Phandom) thanks to  five-rivers Mortified fic and to
the-stove-is-on-fire comics.

that is why i wanted to draw them on their 16, the suit is based on stove’s art and the cape and ice hairpin is my take on how i see when described in five’s fic

hope you guys like the design i made for them 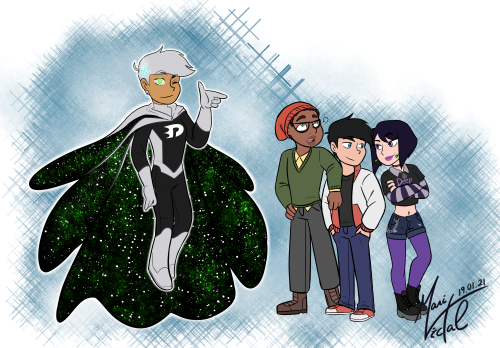 He just doesn’t give up does he? 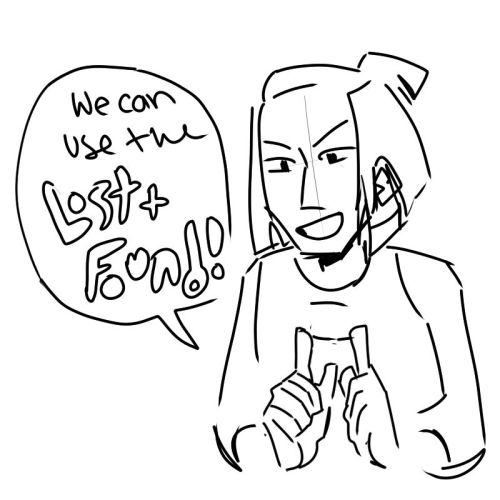 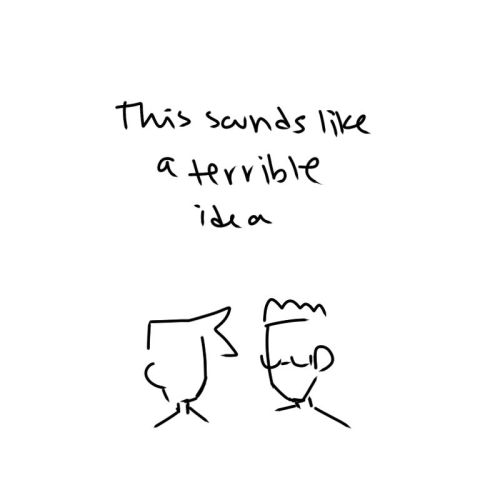 “You’re clearly frightened, so allow me to explain,” the creature told them with a flourished bow. “I am called Plasmius, and this is the realm of the dead.”

“And does that make you a ghost or something?” Sam spat, sounding both angry and skeptical.

“Something like that,” Plasmius agreed before seemingly fading out of sight. Before they had a chance to response, he reappeared behind them. His red eyes appraised them, but specifically seemed to focus on Danny. “I’ve been watching you for a long time.”

Winston was at a complete loss as to what to do. Though Danny was feeling better, he firmly denied anything strange happened before he started feeling ill. Worse, his friends had decided they were not going to leave for a while. After everything that had happened during the day, he really needed to talk to the boy. It was just he did not want company to hear… though, knowing Danny, he would probably tell his friends anyway.

His other problem involved trying to figure out just how much he should say. He knew he had to explain what happened to the boy’s parents, it seemed to factor into both Masters’ and Plasmius’ involvement in the whole mess. But the other aspect, which held most of Plasmius’ attention, was a touchy subject. Unfortunately, that would have to wait until a later time. Without Danny’s acknowledgement, there was little that could be said.

for the first several months after the accident, danny kept accidentally draining any electronics in his vicinity due to his body’s efforts to stabilize his ghost half. tucker was not impressed by this and was quick to ban danny from using any of his devices.

where the fuck did vlad come up with the name plasmius

tucker,tucker’s redesign is fine,i just changed his cap into a beanie and gave him a jacket 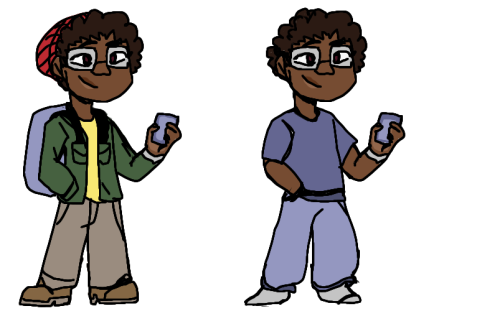