allison: are you okay?

vanya, face down in the dirt: I’m having me time

[Authors note: Oh, sweet jesus this one is a doozy. So much dialogue it was a bitch to figure out where would be a good point to end the chapter.]

In this chapter: We reunite with everyone, Luther and Diego share one consecutive brain cell, and we place the cards on the table. No holding back.

Valhalla Pt 2
Family meeting with a dash of salt

“I’m telling you, the French had this wonderful word for it!” Klaus was regaling Allison of his time in France with you last year, and when you all came upon Elliot’s shop, you had completely forgotten why it is you were nervous in the first place. You grab Klaus’ flask and take a sip. Allison laughs as Five pulls open the door and you all enter. You move to go in last, making sure to hold the door open for Ben. “Thanks.” He murmurs.

#Love across timelines, #Part 11, #Umbrella academy, #Klaus hargreeves x reader, #Literally the saltiest family reunion out there, #and lets be honest, #Luther needed some retribution after the first story
0 notes · See All
bloodybenChat
Klaus: I know you feel rejected right now.
Klaus: But you're important to me.
Klaus: Look at me.
Klaus: You are a beautiful piece of shit.
#klaus hargreeves, #number four, #tua, #the umbrella academy, #umbrella academy
21 notes · See All
chlnymphadoraPhoto

Who lives, who dies, who tells your story?

Being that my FAVORITE time of year is coming because i love halloween BUT my FAVORITEEEE is Christmas 😭 so please send me holiday Ideas!😆 And follow me on insta! Denise_ravenqueen if you wanna know what I look like or see me sing and fangirl 😂

i dont wanna admit that i almost cried watching “the day that wasnt”, but i do

#the day that wasnt, #umbrella academy, #peace, #what im doing with my life
0 notes · See All
couldnt-think-of-a-funny-nameText

I keep seeing people theorizing different ways they can explain Five’s rapid aging in the show but listen. they should just. ignore it. we’re ten seasons in, Aidan Gallagher can legally drink and has a five’o’clock shadow, and they’re still insisting he’s a 13 year old. that’s the only way to handle this.

ksdjfhslkdf he was the only one who never bullied the author the worst thing he was probably accused of in the book was ‘being a reckless dumbass, but in hindsight he was literally 13′ lmao I can’t imagine the public would feel good about cancelling a probably dead child

also thinking about the scene in 2.10 with allison telling diego and luther to desperate with the duck measuring and klaus saying

“unless you can literally because ben and i have a bet-“

LIKE THESE ARE THE THINGS KLAUS AND BEN TALK ABOUT IN CASUAL CONVERSATION LMAO.

literally tag me in any diego or allison fic idc idc

okay what if the directors make five time travel one more time and he accidentally messes up slightly so he’s sixteen, not thirteen so that it explains the height difference while keeping the character?

A/N: Thank you to the lovely anon that sent in the request, I saw it and fell in love with the idea immediately!!!! enjoy!!!!

Five, as you may have already guessed, was not a morning person.

And once you woke up, you could not go back to sleep, even if it was four in the morning.

Which, today, it was.

the literal concept of the show is “on a specific day, a bunch of babies were born to people who were not pregnant when the day began. an eccentric billionaire found them, went around the world and adopted seven of them, and found out they all had superpowers, and raised them to Save The World, to incredibly mixed results.”

unless the show reveals in, like, another season or something that the father of all these children was some singular magical entity that impregnated a bunch of people simultaneously or whatever: no. everyone is adopted siblings. tho i think in the comics, Five and Luther are twins, but that’s not in the show.

like not to be That Guy, but the show has A Lot of fun with the fact Allison, a black woman, keeps introducing her husband to her brothers and sisters, who are white and latinx.

Realizing that season two of The Umbrella Academy they played Hello from the other side in Swedish, when the first Swedish brother dies. 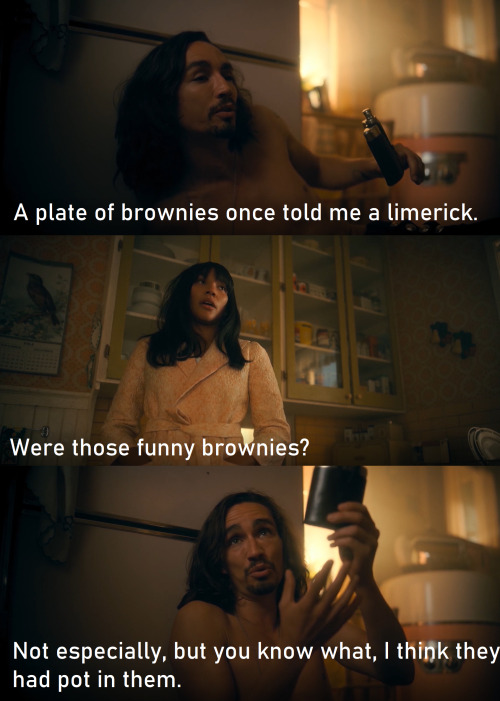 Luther: i think i swallowed my tongue

Five, done with everything:

a fight scene in a trampoline park or something while everyone’s struggling to fight while bouncing on trampolines and klaus is just having the time of his life while trying to avoid getting hit.

i want- no. i NEED s3 allison to go ape shit lmao. this is a side of allison i want to see and not necessarily in an ‘evil’ way. allison is a character with flaw just as any other character on this show and i want them to show it. all of them have been through a lot and i want this to be allison’s breaking point. i don’t mean take away from her improvement and development as a character but show another side of her and let her make mistakes.

she had to leave ray being and if were being real claire probably doesn’t exist in this tl and if she does she definitely doesn’t know who allison is. this is not something i see allison taking lightly considering how she felt about claire in season one.

it’s just something for her character i really want to see.