I miss her 💕 season two is really good so far- I rlly hope you-know-who is in it :,) 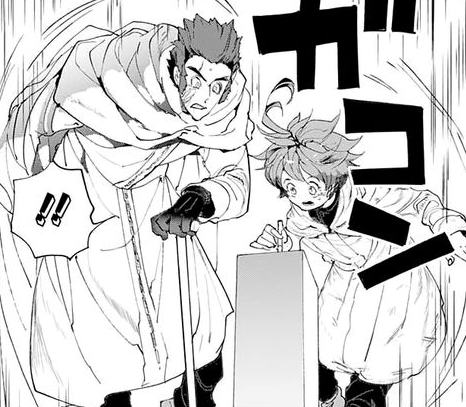 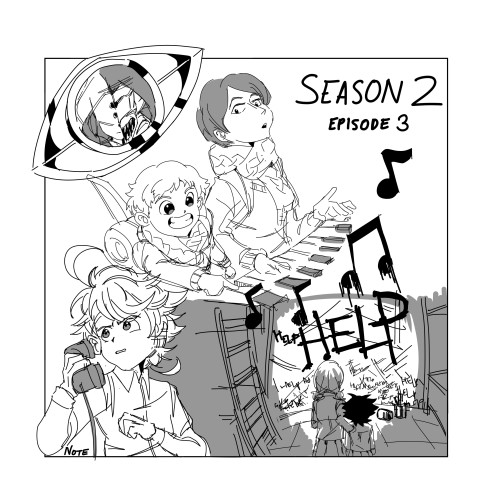 Because people pooed pooed the ending so now the author is using the anime to complrtely scrap and rewrite the story i fucking guess.

THERE ARE TWO RED DOTS-

What could this mean?

WHAT IS GOING ON IN THIS PREVIEW

「予告」 is the name of the 4th episode of the promised neverland season 2.

~ Sorry for the late answer, I kept procrastinating writing my thoughts because I knew this would have turned out to be long ahah ~

First of all, I’d want to point out that, as of now, I’m confident they will not cut Bunkerman and Goldy Pond off the plot. Goldy Pond is a strong and solid arc that I’m sure received a positive response from SJ readers while it was on going; once it’s animated, the anime will be completed of the action that has so far been lacking. As for Bunkerman, in the Shounen Jump’s tpn popularity polls he earned 16th and 7th place, which makes me think he’s fairly popular. His presence adds a very nice twist to the plot: not only he’s the first male adult we see; even though he doesn’t side with demons, he’s still hostile to the children, which comes off as very surprising to the reader / watcher (and builds up to how Andrew and later the whole Ratri clan will persecute them, introducing the aspect that not all humans on the outside are their friends). Additionally, he is the first character to help build up the theme that Emma is not only going to help her friends and family, but also her enemies, which puts the basis of her character development and her decision to save all the demons and mamas. Moreover: how people have already pointed out, Bunkerman has also a very important role as representing the “what-if” version of the children, as showed in chapter 177:

His character has a very poignant role, as he’s revealed to have a very tragic backstory: his story consolidates the cruelty of the world they live in, which is a main theme of tpn, and the way it’s ultimately revealed how the children saved his life and gave him the chance to start living again comes to the viewer as extremely moving.

To sum up, he’s too much of a great character to be omitted- they’re not going to have all that great potential go to waste. His character development and personal growth is too powerful to be thrown away, and I refuse to believe they will (I’m going through chapter 109 again after a long time and I’m getting a little emotional :’)

So next up is when we’re going to see him, right? I doubt it is going to be soon. My guesses are that he’ll show up either in the second half of the season, or even at the very end as teasing for an eventual following season.

The conditions in which the children have found the shelter unsettles me. The shelter confuses me so much, because things simply don’t add up. If Bunkerman and his friends have already been there, then why Minerva’s letter is still hanging there, unopened. On the opposite, if they have never been there, then that doesn’t explain the cookies, which are a clear wink to manga readers, nor the scratched room. I’m confused, because these elements just aren’t coherent with each other, and that makes me uneasy. I’d exclude that the Glory Bell escapees didn’t open the letter, or that a Minerva supporter to come back and place a new one, but then again those elements really don’t make any sense? Any that I can understand anyway- I hope they’ll come up with a good explanation in the next episosodes.

Back to why I don’t think Bunkerman will show up in the next episodes: several elements from the shelter make me think that. The most evident is obviously the rotten cookies. If he’s just out hunting, and he usually lives in the shelter, then I don’t see why he would keep those moldy biscuits (if not to commemorate his comrades? Dunnot). Besides, the shelter as for how it’s been displayed seems to have not been inhabited for a long time: all the crockery was neatly placed; besides from the biscuits, there was not a single hint of people living or having lived there like the food we saw in the manga- if there had been, the children would have surely noticed. Again, that confuses me. Everything is perfectly tidy and clean, making it more similar to the untouched, neat shelter the Glory Bell escapees found when they arrived there for the first time- except for a conveniently scratched room? Isn’t that weird that the room and the biscuits are the very only hint that somebody has been there before? But I’m digressing.

Other things that make me think Bunkerman is not going to show up: the children are learning everything on their own. There won’t be Bunkerman to show them the armory, to talk about them the limited resources and stuff. I believe that them finding about all these things on their own is a further proof that the kids aren’t going to meet him soon.

Shifting back to Goldy Pond, I don’t think we’re getting there any time soon either? There was no hint to A08-63 in the letter. My personal guess is that the “Poachers” skretch was replaced with “help” because we’re not getting any poacher this season, and they didn’t want to introduce so early an element that is not going to be explained in this season. Of course “Minerva” could reveal it in their phone call- but then why not mention it at all in the letter, besides from ending the episode with a cliff hanger? Furthermore: would it make sense to introduce Goldy Pond before Bunkerman? Goldy Pond wouldn’t be the same without him- besides the fact that it would be hard to integrate the story of Lucas and the other Glory Bell escapees, this is a friendly reminder that it’s Bunkerman to both break Lewis’ mask and later kill him.

Now, as for my personal guess? I think the children are going to leave the shelter and look for Minerva. First of all, that would explain why, in the opening, everyone has the go-out-shelter-coats:

That’s the outfit Emma, Ray and later Gilda and Don wear when going out; it’s an outfit we never saw the younger children wear in the manga. Another reason why I think that all the children are going to leave together is because it’s the only way to protect them: they still can’t be sure the shelter is a safe place (the manga reveals it isn’t), so they can’t leave the children alone in it. In the manga, they divide in two groups: Emma, Ray and Bunkerman leave the shelter, and Gilda and Don would have stayed to keep the children safe. For how things are in the anime, this becomes a problem. Let’s say they decide to leave the shelter (and like, they will, otherwise the plot can’t move on lol): Emma and Ray can’t leave on their own, without Bunkerman to both guide and protect them; at the same time, they can’t leave with the support of Gilda and Don, for that would mean leaving the children alone in the shelter. It’s not only because leaving a group of less then nines alone would normally not be a good idea (these children are very smart, so maybe they’d manage to go on?), but they can’t really know if the shelter will keep being safe: only because the demons haven’t found it so far, doesn’t mean they can be sure they won’t find it at some point; additionally for what they know poachers are still after them. That’s why I think the most logic progress of events will be for the children to leave the shelter together. Which, even though I stand for what I’ve said… Sounds like a very bad idea??? Not only the children keep travelling in this demon world- they also don’t have weapons besides from bow and arrow? That’s why I find the armory being empty one of the most senseless things- of course I want the children to be safe, but for the children to survive in demon forests completely unarmored sounds extremely unrealistic. I just hope they aren’t going to kill one of the “irrelevant children” to prove how dangerous the world is, that would destroy me.

Ok, I think I covered everything! Thanks for asking! Let’s hope together they won’t mess this up for us :))

What you gonna do with the soup? Eat it? Or throw it against a wall (only to eat it later anyway) 🍵🍵🍵 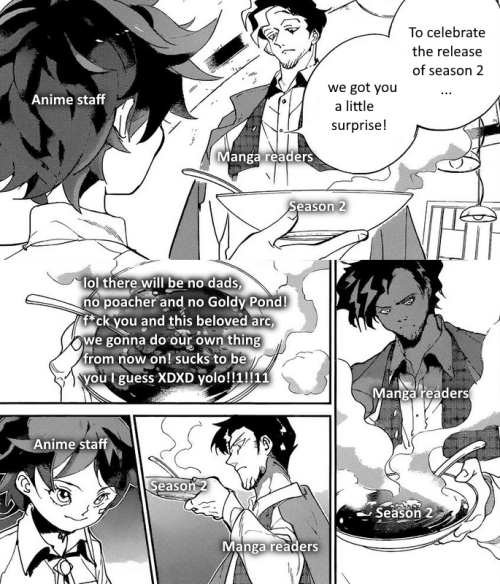 “This is the gas can… my boyfriend, Yuugo, blew himself up-“

The trailer for episode 4 concerns me.

Welp looks like the promised neverland Anime is officially dead to me. Who the fuck thought cutting out one of the most populsr arcs and the multiple well loved characters it introduced was a good idea?

Time to wait however many years it takes for them to realize they fucked up and give tpn the brotherhood treatment i guess.