So I did a thing! Our lovely boy needs his own eyeshadow palette!

Soldat - A black because of the outfit and because of all that smudged “war paint”.

Sergeant - A tanish brown color that matches his uniform when he’s shipped out.

The 107th - A dark brown because I just thought of all the dirt on that poor boy.

“Doll” - A lovely cream color that reminds me of ‘40s dresses or maybe a little slip/babydoll number.

Henley - A nice reddish color because that shirt was a fucking gift.

Vibranium - A soft grey to go along with the color of Bucky’s new arm.

White Wolf - A glittery silver because one they didn’t have white and because who doesn’t like some sparkle. Plus I love the nickname and wanted to include it.

Plums - Another glittery color but this tome it’s a fun purple! Our soft boy just wanted some damn plums and was minding his own business.

for my next tickletober fic (wake up) I need y’all to pick a fandom/pairing bc I cannot decide lmfao. Here they are:

please just shoot me a message with the letter, leave it in a reply, or send it in an ask. I need this for my sanity. thank you!

A/N: just some platonic fluff between bucky and steve’s girlfriend ;D THIS IS AN OLD POST I KINDA REWROTE FROM MY OLD ACCOUT @nostalthicc​

The Falcon and The Winter Soldier (2021)

Day 19 - Here comes the sun, over your head like a warm sunrise / You know that in this world not everything’s good / But right now nothing can hurt you / Maybe your joy, seems so simple in front of people / It’s not everyday, you’re feeling this joy / It’s more precious than all your money

Summary: Earth fears intergalactic war with another planet. The Avengers are called to work out negotiations on Zevitar, the planet of peace. What happens when they are reunited with their long lost team member?

Notes: Here’s chapter 4. It’s short, but it was originally planned to be short. Just wanted to give a quick thank you and say how grateful I am for all of you and I’m grateful to all of you for being so patient with me. Hope you enjoy this. Please make sure to like, comment, reblog, inbox, and follow me for more! Enjoy :)

Strange furrowed his brows as he looked at the monitor. He watched with intent and curiosity at young Peter Parker and how he moved his fingers at superhuman like speed at the computer.

“Have you found anything?” Strange asked for probably this hundredth time.

“Not yet, I have to-“ and Peter started spewing some tech jargon that Strange would never understand.

When Steve announced his team for Zevitar, Wanda and Strange knew they had to work fast in case Bucky were to run into you.

They hoped for the best, that maybe you were in hiding and living a quiet life on your home planet. However, fate was never on a superheroes side so they needed to prepare for the worst.

The pair immediately thought to enlist Peter Parker on their quest to uncover the missing audio files from your final days on earth. Peter was the next best thing to a tech whiz, besides Tony of course, and he was also the only Avenger who was kind of left in the dark about the whole you and Bucky debacle.

“I’m not sure that’s actionable,” Pepper remarks. “We don’t want to burn our source, after all.”

“It’s useless anyway if we don’t know where they’ll move,” Fury states coldly. “So nothing changes. You’ll keep observing Barrandov and once they pack up and leave, we’ll start patrolling the entire city until we find them again. The other ones are located, yes?”

“Yes,” Sharon confirms. “We’ll pull back now in order not to make them suspicious, only check in once in a while that they’re still there.”

“Bílá Hora’s under control,” Natasha mutters. “That’s what he said.”

“Time’s running out,” Fury reminds them. “So, how is the ice block?”

One More Goodbye - You’ll Be Okay -

You Are Not Broken - Asexual Bucky x Reader

Bucky x Clint: He Murdered My Snowman -  Sacrifice - Chained to My Heart

The Winter Soldier project was one of Hydra’s greatest collaborations, and greatest successes. Every part was necessary to support the others, but when faced with the ultimate test, their creation outperformed their wildest expectations. And it all started with simple scientific curiosity.

See, Hydra had this fancy new mindwiping technology which they were just itching to use. And it would be perfect for the Winter Soldier project, where the only so-far successful trial subject of their supersoldier serum has inconvenient loyalties. There is just the slight complication that all the previous test subjects of that procedure have also died.

Top 7 Male Characters as Voted by My Followers

There were times when Steve suddenly found that he was outside himself looking in and realizing that as much of a gift as the Super Soldier Serum was, it was also very much a curse. That much was the most painfully obvious when he was forced to watch his teammates suffer through hardships that didn’t affect him as much.

Steve, Bucky, Tony, Natasha and Clint had been stranded in this desert two days ago. No one knew where they were. It was extremely likely no one was coming for them. Their only option was to try and walk their way out. Steve and Bucky had a good chance of making it… but the longer they went without finding any signs of civilization, the more obvious it became that the others might not.

Steve and Bucky were not completely immune to things like heat exhaustion, it was just something that affected them at a much slower rate than it did the others. So, Steve and Bucky’s priority was to keep the others going as long as they could.

They traveled at night and rested during the day when the heat was the most brutal. They had been lucky enough to have a decent supply of water and a limited amount of survival gear - all of which were carried by Steve and Bucky -  but they also knew that their water would run out eventually and they had no idea how far out from civilization they were.

“Steve,” Bucky called up to him. While they were on the move, Steve would walk in the front of the group while Bucky would take up the rear, leaving Tony, Clint and Natasha to meander in between. Steve glanced over his shoulder at the sound of Bucky’s voice. “Let’s find a place to stop and rest soon.”

Steve’s weary gaze drifted to take in the rest of his teammates. Tony and Clint still seemed to be keeping up with his slow, measured pace, but Natasha had dropped back, Bucky keeping pace with her to make sure she could keep going. Her gaze was glazed and unfocused and she stumbled several times as she trudged along.

But as he turned back he couldn’t help but eye the sun hovering just over the horizon, barely warming the earth yet. It was much earlier than they had stopped the day before. Their pace was slowing significantly.

When someone asks me about my plans for my future: 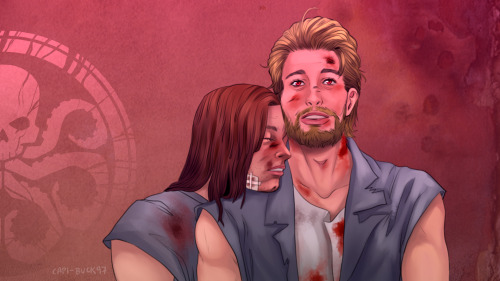