There are no memories to capture. There are only times they manage to stay afloat: disgusting motel towels and the radio blaring high static as Dad tries to tap the police channel, breakfast diners with dad before heading back to the motel to hunker down. Then, times when they’re dragged under: Dad drowning in hunts and whiskey, and the food money runs dry while they wait and wait, scared to open up the door to police or an angry hotel manager demanding pay, kicking them out, or worse, their Dad taking his last breath few miles south, passed off as a regular John Doe as he flatlines.

Dean remembers a timeless night in Sandusky, Ohio. A faceless girl had slung her bony arm around his shoulders and snapped a polaroid. He remembers her religiously waiting for the grainy film to develop, flicking the photograph even though he knows from Sammy’s rants that you’re not supposed to do that. The two of them look so young, in the mirror of her dresser, the glimpses of lanky limbs and youthful features. They look happy - normal, sitting side by side on the bean bag couches in her room, door slightly ajar at her parents’ demand.

When the photo develops, she thinks they look great. People see what they want to see, because he looks forty in the picture. He sees his Dad in the premature swelling under his eyes, the weariness of his face. Sees the lost vacancy of his eyes and sunken bruises barely covered with misappropriated concealer around his neck. Laughter forms ash on his tongue.

He doesn’t remember it, but he dreams throughout the night about the demons in his head, and imagination colours in the picture for him. He feels scorching heat on his back, Sammy screaming in his arms, trembling life.

Whenever he’s hanging out, he puts on this facade, a drifter kid who’s a little bit rebellious, devil-may-care, grins coming easy on lips. It falls apart some when they try to talk to him, try to connect their experiences when there are none, and find frustration in doing so. Thank god he’s a looker, though, because most aren’t looking to talk when they’re around him, much more willing to flirt and touch and talk about nothing at all, until all vocalizations are just breathy moans or gasps as lonely bodies find rhythm.

The time when the door rattles in its frame and Dean nearly jumps out of his skin but it’s just a prank and his friends laugh at him ‘bout what a coward he is. Maybe once he’d have the energy to muster up anger or shame at that, but seeing the youth on these alien faces reminds him of Sammy, of the dead person he saw last week in Maine after Dad loaded bullets into her after she succumbed to a feeding frenzy. The laughter only has him clamming up, sad, and it makes them jeer even more, misinterpreting the solemnity.

He’s glad that the teasing gives him the excuse to look down, because he doesn’t want them to see the looks in his eyes. The finality of his wizened eyes that see death in every person, wherever he goes. Photographs waiting to be memorialized.

“definitely illegal thing you shouldn’t do so I’ll show you how to do it, to make sure you don’t do it on accident”

Hey, you know that one character? The one played by the tall, long-haired actor? The one who was pre-law in 2005, and well on his way to going to law school and getting a degree until an unexpected family issue reared its head, and he dropped out and chose a different career path? Y’know, he’s got that complicated relationship with his father, a parent-child relationship with his only sibling, and has some strange, destructive abilities that tie in with multiple traumatic experiences with fire?

#supernatural#icarly#listen#icarly started in 07#spencer had already gotten into law school#dropped out after 3 days#and is well established to have been carlys caretaker for some time#so he was ABSOLUTELY pre-law in 2005 just like sam winchester#spencer never told his dad that he quit law school to pursue his artistic career until the very last episode#he is his little sister carlys PRIMARY CAREGIVER#their mother is never mentioned!!! at all!!!#also he literally sets shit on fire all the time in icarly#its implied that he does it by accident just by touching things every so often#i know its not the same as demon blood powers but its like#a thing#i swear im not making any of this up#i know my shit when it comes to icarly
474 notes
4-f0x-sake
Text

My brain has lagging problems. Like if someone is talking to me, it can take me a couple of minutes to think about & select the correct response. Once I think of something worthy to add to a conversation it’s usually already over.

If I owe you any replies, hit me up, please

#rambles#not gonna lie when i saw reshi's tags i went ''!!!''#because in my head i kinda consider her the Master Of Drawing Jesmon because of how often she must draw caliburn#so it kinda feels like ive gotten approval from one of the Cool People#and of course i also went ''!!!''#when i saw silas' tags#because silas is also super cool#also for some reason after the sketch my brain just designated jesmon as 'not super detailed' which is?#a thing#apparently jesmon isnt detailed now. oh well#i hope yall dont mind me tagging yall but like. i wanted to Yell because you guys are so nice and i cant believe yall think im good at -#details? like?? i have been given approval from the Cool People? it's WILD
4 notes
therem-harth
Photo

Aaaaaaaa so my dear friend @fandom-of-random​ (but really she doesn’t use tumblr except to stalk) made art of my D&D char firbolg paladin Maskan that I’m saying goodbye to and leaving to make soup in feywild as his personal healing journey! And I love it so fucking much even when it’s uncolored that I though to share (with permission ofc) so maybe some of you get the nourishment from his peaceful smile too!

The tshirt text is from this pic i shared in the group chat, under the cut 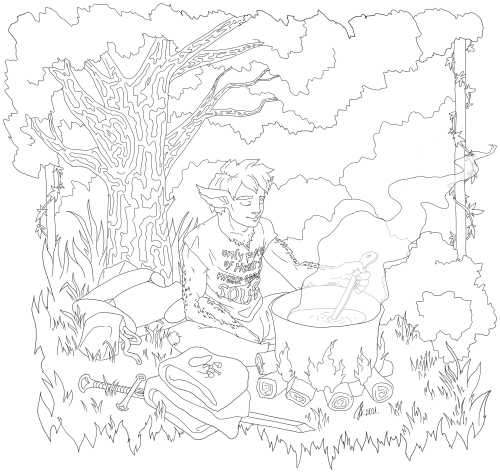 #personal#a thing#laura you are amazing and i hope your crops are flourishing and your skin is clear#batman forever#this is really coo#l#gods i so wish i could go to a print shop and print stuff huh#so i could frame it#but that'll have to wait until after covid. plus after u color it#i just fucking noticed that it somehow changed my tag of forever to batman forever and that is so funny
1 notes
picazos-angsty-typist
Text

Anyone else do the thing in school where:

Me, in my head: Ok so she wants to know about the War of 1812, what caused it and who was fighting it and where the major battles took place. But I don’t know much about the War of 1812. I should just give an overview. Basically, I should answer that America and Britain fought a minor war, mostly by sea, and nothing much was gained and nothing much was lost.

Teacher: “That is correct.”

In Season 2 when Cole blasts the falcon with his elemental sword on the island, Zane says “that’s not a coconut”, but the thing is that Cole never thought it was a coconut and just thought it was a random bird

Apparently my grandpa was part of the Dixie mafia.

#so that’s#a thing
1 notes
athousandgateaux
Quote
<div> —  Jean Baudrillard, <i>Why Hasn’t Everything Already Disappeared?</i>, pg. 12 <br> </div><span>The moment a thing is named, the moment representation and concepts take hold of it, is the moment when it begins to lose its energy–with the risk that it will become a truth or impose itself as ideology… Thus the real vanishes into the concept</span>
#baudrillard#jean baudrillard#why hasn't everything already disappeared#thing#a thing#the thing#naming#names#name#representation#concepts#energy#loss of energy#truth#ideology#the real#reality#real
13 notes
bermudianabroad
Text

Cinema Outings 2020 [or Everything I Managed to Cram into January, February & March]

R.I.P my student discount cinema card, so brief was our relationship.

Portrait of a Lady on Fire was without a doubt the best film I saw in 2020. That end scene alone knocked it out of the park. Parasite a close second.

If you go through the whole “envisioning Dante in a western” line of thought what you end up with is Kaiketsu Zubat.

Goal before the new year is to update this little story called…what is it again? Oh, A Vow Without Honor.