I am stuck under my bed an my carpets kinda itchy

#bee needs help, #i cant get out, #aaaaaaa
1 notes · See All
block-and-tackleText

So I had fun with the For the Worthy seed in Terraria, and the character I used for that seed is Roland Crane from NNK2: Revenant Kingdom because why not.

You know what I’m not even have the Terraria tag, this is so silly. 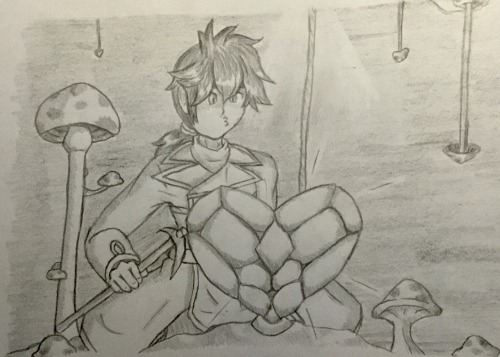 Okay but why have I suddenly started thinking about Grog, Percy, Scanlan and Vax casually sharing a bed together? Nude or clothed?

Why can I see them all going out sparring then getting drinks to celebrate, but it leads to something more?

Where did I get the image of them bathing together at a fancy bath house because the baths at Whitestone Castle aren’t big enough and they hate bathing alone?

Why can I see Gilmore tagging along sometimes, Vax hiding from him behind the other guys because he’s too shy to show his body off to Gil?

Why does my brain keep doing this to me???

Goodnifhr! I’m going to bed! Which translates to me lying in bed planning fanfiction for hours and then forgetting to actually write it in the morning!!

To be fair, the timeline for this fic is all kinds of messed up even for me. Like God damn. Literally where do I start.

Neptune fun fact: it rains diamonds on neptune!
Neptune prompt: drowning in grief. the loss of a loved one.
Sabe packs up 500 Republica after Padme’s death.

She moved back to the living room, cold and dark. Throw pillows perfectly placed. Not a thing out of line.

Her hands traced over the fabric, soft and warm, like how things used to be. Before the dark times.

She looked out of the window towards the balcony, and saw in the distance, the spires of the Jedi temple. What was left of it. It stood cold, gray, bleak, against the backdrop of the skyline. A place that once radiated warmth, was now cold, empty, and alone. She turned away from the balcony. She couldn’t think about that. She had a job to do.

And that’s when she broke. Sabe looked at the inside of 500 Republica, as they began to pack and seal everything away for the last time. In the past, Padme would be wandering around, holding up outfits that she wanted to bring home. Suggesting places that she wanted to visit when they returned to Naboo. That was where she wanted to have her baby. Sabe had even been helping her with the design of the nursery.

It wasn’t supposed to end like this. She had sworn her life to protect Padme. She knew she should have gone with her- but she was adamant that it was personal. Sabe looked back at the apartment, at the holos of the walls of her family. She turned them off. They were personal.

She made her way to the kitchen, powering off appliances and removing any food that was left. On the counter was a loaf of bread that Padme had made. Sabe tore a piece off and took a bite. It was still fresh. But it tasted bitter. She threw it away. Closed all the cabinets for the last time. She heard a knock from behind.

“Likewise, but I wish that… that it wasn’t like this.” She whispered, but it still echoed across the room.

“I shouldn’t have let her go alone.” Typho said as he clenched his fist, “If only- “

“Stop.” Sabe command harshly. “Please.” She whispered softly. There was a tense pause- the air was still, stale from the lack of movement.

“You don’t think she died in childbirth, do you?” She whispered after a moment.

“No. Neither do I.” Sabe said. “But 3PO’s memory was wiped. And Skywalker didn’t survive… whatever happened either.”

“Did they find his body?”

“No, but does it matter?” Sabe asked. “He loved her- you could see it in his face. There was no way he was going to go down without a fight.” She sighed and walked past him.

“I’m going to make sure we put everything away in the bedroom.” She muttered. Sabe walked through the apartment- moving through the still air as if she was in a dream, as if Padme would walk in at any second, and tell them all about her newest adventure. But she didn’t.

She entered the bedroom and looked around. The bed was perfectly made, not a thing was out of place on her dresser. Sabe sighed and sat down on the edge of the bed, her tears spilling over and landing on the ground.

She shifted her feet and felt something brush against it. Looking down, she picked up a piece of clothing. She held it out in front of her. The fabric was soft, and the elaborate flower patterns against the pale yellow of the fabric stood out against the bleakness of the bedroom. She studied it in the light that was coming in from the window- trying to remember when she had seen Padme wear this dress, but she couldn’t remember.

There were colorful ribbons that hung off of the sides. Sabe let them slide through her fingers, trying to remember. But she couldn’t. She sniffed and stood, holding the dress in her arms like as if it was about to break, and she walked over to the closet and hung it up with everything else.

There, watching as all of Padme’s dresses hung there- to be worn never again, did Sabe really wonder about how everything went wrong so fast. How she went from planning a nursery to burying her friend.

But there wasn’t any time to dwell on that now. They couldn’t stay for long. The empire would be looking for them. She turned away and closed the closet for the last time. She grabbed the sheets that were on the other side of the bed, and hastily covered all of the furniture, all of the artwork. She quickly worked through the apartment. She covered the couches, the statues, the lamps. She stopped at Padme’s portrait.

She left it uncovered. And walked out of the apartment. Behind her, the doors slid shut for the last time. The seal of Lady Amidala’s face covered the doors- sealing them from the public. No one could get in unless they broke it.

The seal lay cracked in half on the floor. It tore her face, her body apart in half. The artwork lay in ruin. Rubble and dust settled around the pieces. Dust had collected on the old sheets that hung from the artwork, the furniture, the paintings, the lighting.

A gloved hand touched the edge of the couch. Touched the sheet covering the statue. Picked up an old data pad that was on the table.

The sound of a respirator broke the silence.

‘She was the mother.’ A voice said into the night.

#davy jones, #maccus, #mavy jones, #AAAAAAA, #sorry this took ages, #but it was well worth the wait!
1 notes · See All
chuuaku-x-dazatsuText

imagine chuuya turning on some music, and asking aku to dance with him. aku is hesitant, and starts saying that he shouldn’t, he doesn’t know how to dance, blah blah blah, until chuuya shuts him up with a kiss and says “shut up and dance with me, ryuu.”

#nicholas complains, #aaaaaaa, #i'm gonna fail every single class or whatever haha, #maybe not, #but gsjshsgsk
0 notes · See All
inxriyamaAnswer

Ohh I can eat them for you then! Just put it on my plate. I can understand the hens. Mine are a bit stingy back home. Ill just wear something else when I hug the goats then, too! Id shower Agatha with love.. 🥺🖤