Judge: does the defendant have any special requests?

Tony: Peter you’re here for accidentally running over a dog with your car

Betty: Go and tell Peter that you think he’s cute, what’s the worse that could happen?

MJ: he could hear me.

Peter with his super hearing:

Peter: To all the misguided people in the world..I am not an orphan..I’m an or-fun

Tony*cries*: Kid that doesnt even make any sense!

That would be amazing

Me: wait no you’re supposed to be evil like me-

My hands: make them adorable while sleeping. make them cuddly. make them so fucking tiny and squishable. make the reader roll around in joy from the pure fluff. make them collapse with exhaustion and not be able to resist hugs. make their friends and family hug them super tight.

Me: Wait that’s not how-

My hands: Fuck you and it’s time to make them adorable no hurt today.

28 seconds of Harry being ✨sassy✨

“…people…asking me where the tea is…”

I’m gonna cry I came home feeling very sad and found this on my bed my roomate bought me a spiderman doll and I dont know why but I love him.

She knows spiderman is my favorite

#spiderman, #peter parker, #i adore her so much, #im crying, #jak speaks
3 notes · See All
hollandprkrAnswer

omgggg yessss!!! hope you enjoy!!! i didn’t know if you wanted it to be smutty or not at then end so i stopped it before it could get there, if you want a smutty part 2, feel free to ask❤️

SUMMARY : On a boring Tuesday at home, you decide to play a little prank on your boyfriend.

WARNINGS : Swearing, talks of a WAP (aka a wet ass pussy), Thomas responding in suggestive ways but being a cutie pie ye :)

It was currently a Tuesday and you were laying on the sofa with Tessa by your feet. You were scrolling through tik tok as another episode of the simpsons played in the background. Tom was currently out playing golf, you decided to sleep in as there was no way in hell you were going to stand outside in the October chill, and stand and watch around 7 men play golf. It was about 12pm so Tom would be home in about an hour concidering he left at around 10:00am.

You continued scrolling through tik tok when you came across a certain video. It was of a girl sending texts to her boyfriend, but not just any texts, WAP lyrics. She screen recorded her boyfriends reaction to the text and then filmed his reaction when he came home before she told him that it was a prank. You silently chuckled to yourself when the thought came to you that you could do it on Tom. You went from Tik Tok to your messages and pulled up Toms contact.

Beat it up, catch a charge

You giggle to yourself as you watch the ‘read’ sign appear straight away. Tom on the other hand is finishing up on golf, chatting to his friends about the game before he gets a message from you. He pulls out his phone with a smile but that’s quickly replaced by a look of confusion after reading what you wrote.

What do you mean, Darling?

You bite your lip before typing the next lyric.

Before you had time to put the next lyric, Tom was already replying.

Ohhhh do you want some XL fries from McDonald’s??

Your laugh filled the room as you typed the next lyric.

You couldn’t help the smile that came to your face as you typed again, knowing Tom will start to freak out.

Put this pussy right in your face…

You watch the three dots appear and disappear for a while before Tom finally replied.

Y/N! I’m with my friends…what are you doing?! You can’t just say stuff like that!!

You are already skipping to a different part of the song, needing some more juicy lyrics.

I don’t want to spit, I wanna gulp

I wanna gag, I wanna choke, I want you to touch that little dangly dang
That swang in the back of my throat.

Tom doesn’t text anything else before he rushing to say goodbye to his friends and go home to you. His friends all share a confused look before allowing him to leave. You knew you were in for it when Tom them texted you a small ‘omw!’.

You got your phone out ready as you heard a car door slam and some quiet muttering before the door opened to reveal a very frustrated Tom. You bursted out with laughter as he pointed to the very obvious boner that was being concealed in his trousers.

“Why are you laughing?? This isn’t funny!” Tom said, frustration lacing in his voice.

“I’m sorry baby! It was a prank” You say, laughter interrupting every few words. You see a pout place itself on Toms face.

“I…I thought you wanted to choke…on me…got me all excited” Tom whines, looking back down at his hard on. You pout as you walk seductively towards him. You lift his chin up.

“Awww…well lets do something about that then huh??” You spoke before you sunk down onto your knees.

Hope y'all enjoyed this!!!!

YALL I AM NOT OKAY

because peter’s strong but he’s also. so light? so he picks harley up on the daily but one day they’re play fighting and next thing you know peter goes fLYING back onto the couch, and that’s how they learn.

and harley will pick him up at any chance he gets.

pick him up out of bed.

carry him into bed.

carry him into bed and drop him onto the mattress.

accidentally miss the mattress and peter goes falling onto the floor. (oops.)

#i wish i could draw, #this would make some adorable fanart 😭, #headcanon, #peter parker, #harley keener, #parkner
78 notes · See All
probablyagoddessChat
Tony: you are literally the most adorable person ever
Peter: *gasps* i am not adorable, you take that back! i am DARKNESS! i am PAIN! i am SUFFERING and MISERY and– oh my goodness, look, mr. stark, it's a puppy, oh gosh, it's so cute, i can't
Tony:
Peter: i see your point
#peter parker, #tony stark, #iron dad and spider son, #iron dad, #spider son, #peter being the adorable human being that he is, #i love him so much guys it's not even funny, #mcu, #mcu peter parker, #i'm so very tired
152 notes · See All
funnyincorrectmcuText

Pepper: Maybe you should go a little easier on Peter. He’s having a hard time adjusting to the whole Avengers thing, you know.
Tony: I’m trying to get the best out of him! We don’t just give out participation trophies here, Pep.
Tony: Well actually yes, we do. Nat makes them and they’re adorable. But that’s besides the point.

#🕷 | 𝗢𝗨𝗧 𝗢𝗙 𝗖𝗛𝗔𝗥𝗔𝗖𝗧𝗘𝗥 ⇢  even ooc i still can’t shut up about peter parker., #i forgot to do this when i was tagged, #but they're quite adorable
7 notes · See All
tentacolliiText

#tony stark, #peter parker, #ironman, #spiderman, #irondad, #spiderson, #ha!, #i was inspired by a post on tumblr, #because this would totally happen, #adorable, #also peter is me, #like seriously, #same, #too cute, #mcu, #mcu incorrect quotes
324 notes · See All
unfortunate-arrow-next-gensText

and their adopted five-year-old daughter, May.

Peter found baby May abandoned in an alley. Her parents had been killed, so he brought the baby home to the Avengers compound, where both he and MJ fell quickly in love with her. They named her May after Peter’s aunt and the month they found her.

When she arrives in 2017, May is to be protected… no matter what. That’s why she’s one of the first to arrive at the Avengers compound with the Maximoff twins, Morgan Stark, and Sarah Carter-Rogers. May is just happy to her mom and dad again.

#mcu third gen, #mcu, #Spider-Man, #May M. Parker, #Peter Parker, #MJ Jones, #mcu au, #Peter’s daughter, #MJ’s daughter, #(I went the adopted route because I couldn’t find a faceclaim that worked for their little daughter), #But hey adoption is just as great as carrying the baby yourself, #(Yes her faceclaim is Sunny Baudelaire, #but Presley Smith is adorable)
3 notes · See All
maryo274Photo

EVERYBODY needs the Emotional Grip Holders every once in a while, even Earth’s Greatest Defender. This was the moment Stark thanked God he had his kid around. 😊

Just an adorable Irondad and Spiderson moment. I have no idea where I saw this incorrect quote, but as soon as I saw it I knew I had to make a comic of it, it’s just adorable.

Hope you like it. If you enjoy my work give my art a reblog, it really means a lot.😊 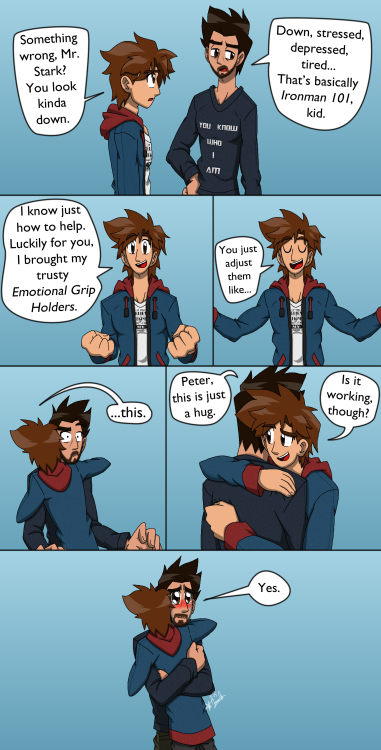 #tony stark, #ironman, #irondad, #peter parker, #spiderman, #spiderson, #incorrect mcu quotes, #incorrect irondad and spiderson, #incorrect marvel, #avenges, #MCU, #my art, #they're just adorable, #tony stark needs a hug, #tony deserves some love too, #DO NOT tag as ship, #do not tag as starker, #AT ALL, #peter parker is a precious being
262 notes · See All
superheroes-quoted-by-novaChat
Tony (blows up something): OUCH!
Pepper: I told you to be careful, but do you listen? Stop playing around, Tony, you have a meeting in twenty minutes.
Peter (blows up something): Whoa, that's so cool. I wonder if we should add -
Pepper: Oh my God, Peter, baby are you okay? Tony, what are you standing there for!? Get Dr.Cho ready in the Med Bay!!
#ironfam, #spiderson, #irondad, #mama pepper, #ironmom, #avengers as family, #ironman, #peter parker, #tony stark, #pepper potts, #spiderman, #peter has everyone wrapped around his little finger, #adorable peter
1 notes · See All
Next Page