Love ya my babies 😘

Akashi and Furihata doing the Koi Dance. This is from the drama NigeHaji, and it went viral on Japan a couple of years ago. I’ve always wanted to draw these two dancing this song~

Also, I’m dedicating this fanart to my cousin. ♥ Before finishing this drawing, I had just discovered that she ships akafuri too and I’m still DYING. (And she said, “I’m glad that I’m not the only crazy one who ships them,” and I was like, “oh gurl, you have no idea.”) 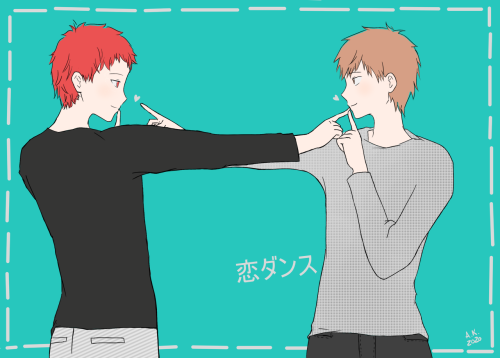 The breakup hadn’t been bad, per se. It could hardly have been anything the way it ended.

Akashi reaches out to touch the maple in front of the house, its last leaves dangling helplessly in the breeze. Mayuzumi takes out his phone—to jot down notes, as he does. A single leaf symbolizes loneliness, footsteps in the snow are foreboding. Silly things that he doesn’t quite know why he still keeps track of when he has not written anything worth publishing in such a long time.

I’M TRYING TO CALM DOWN BUT IT’S NO USE SO LET’S JUST SCREAM.

44. A small, fleeting kiss – which is immediately followed by a passionate, hungry one.

You two sat on the big brown couch in your house and watched the last part of the ‘Twilight’ saga, but somewhere in the middle of the marathon, you started talking more about plans for the next three days than you actually watched an acting movie. You were full of ideas and enthusiasm for planning, because your house was still empty until the end of the week, so you could invite your boyfriend for a few nights.

Your parents didn’t mind about it; without lying, they liked Akashi very, very much, and they trusted him enough to know that he wouldn’t hurt either you or destroy their apartment. So they left the two of you some money, did your shopping beforehand, and at the end wished you a good week and went on a tiny anniversary holiday somewhere on the other side of the country.

It was the first time the two of you had spent the nights together and it was really perfect.

“… Why not go to the zoo? Or to an amusement park? I saw the flyer that they opened an amusement park once again! Ahh, I’d like to eat cotton candy or takoyaki…” You smiled happily as you jumped lightly on the sofa, and your boyfriend frowned and thought too.

“I’ve been thinking more about going to a museum or going on a bike trip and picnic, but your idea is great too. It’s a tough decision.” He replied seriously, and you widened your happy expression.

“Hmm. So… Maybe tomorrow morning we will go to the zoo, in the evening to the amusement park, and in two days we will go on a bike trip? Let’s go to the museum in a next weekend, because there will be a small festival with food nearby and thanks to that we can visit two places at once. What do you think about it, Sei-kun?” You showed a both thumbs up and your boyfriend nodded in satisfaction.

After a long conversation, you finally fell on your boyfriend’s lap with fatigue and cuddled up to his warm, quite muscular stomach. Seijuurou, on the other hand, gently smoothed your soft hair, and after a few short seconds he bent down towards you, giving a quick but warm peck on your temple.

You gently shifted your body to give the sixteen-year-old better access to your face, so that after another whiles you could feel a light, really sweet and indescribably tender kiss in the center of your lips. You grabbed the red-haired young boy by both pinkish cheeks and he took your hip so you could stay in that position for a few longer and really enjoyable moments.

Those few longer seconds slowly changed your kiss to be more confident and faster. Even you were surprised how from a calm caress everything turned into a kiss full of hunger and passion, during which your waist was squeezed tighter and your own hands as if they spontaneously moved to the teenager’s neck and pulled him even closer to your face.

You were definitely glad that your parents weren’t home right now.

19. A kiss full of jealousy for the other person. This kind of kiss to show everyone that you belong to each other.

You apologized to the main coach for a short while and followed the signs to the ladies’ bathroom. In about half an hour the Rakuzan team will be playing a match against another High School and they were just warming up now, but pee… You couldn’t discuss further plans with your team and bandage their legs or hands when you wanted to use the toilet as soon as possible. That’s why you set aside your notebook and your binder, and walked towards the exit of the gymnasium, then into the hallway which, thankfully, took you straight to the desired WC.

You quickly used the toilet, washed and dried your hands thoroughly, corrected the hair that fell over your eyes and straightened the T-shirt with the ‘RAKUZAN MANAGER’ inscription on the back. You came out of the ladies’ bathroom after less than three minutes and, walking out of the inside of a bright room, you accidentally hit something hard and big. As it turned out, it was a very tall boy, about your age. You smiled at him awkwardly, bowing and apologizing fastly.

“… Relax, nothing happened. A little woman like you can’t do much to me.” He laughed softly, and so did you, because the stranger wasn’t lying.. He was taller than you by… He was just much taller than you. You immediately recognized him as a basketball player, probably in the center position. “Oh, you’re on the opposite team! We’ll have a game together soon. Hmm… Who do you think will win?” He asked curiously, and you thought about it.

“Well, I personally have a lot of hope in my team, but I will count on a fair fight between you two. By the way, I watched footage from your previous games and you guys are really, really good! I was pleasantly surprised by this.” You raised both thumbs up and the teenager thanked for it. “I can’t wait, ahh.”

“Me too, and I promise, I won’t give your friends an easy start.”

Shortly after, he introduced himself to you, you did it too, and then you both started walking towards the huge gym. You were talking about basketball and about previous and future matches all that time, which made the conversation very enjoyable and interesting. However, when you entered the room, the eyes of several people turned to you and to a brown-eyed boy named Rei.

From the corner of your eye you have seen Mibuchi and Hayama whisper to each other and turn towards Seijuurou, who’s also watched you really carefully. You smiled in his direction, then looked at your new friend who suddenly stopped and stood next to you.

“I have to get back to my warm-up, but thank you for the talk. Maybe I’ll see you again sometime, so see you, Y/L/N-chan!”

“Bye, Rei-kun and good luck!” You waved at him and then two of you went in your separate ways. After a while you returned to your place and you were about to reach for your papers, but a hand on your hip stopped you. “Yes, Sei-kun? What happened?”

You straightened up, then turned around and barely had time to take a breath, you instantly lost it because of the surprise kiss your boyfriend gave you. It wasn’t an ordinary, gentle peck, but an incredibly long and wet kiss that shocked not only you, but also your entire team and the opposing group.

But when you pulled away from Seijuurou (or rather when capitan let you pull away from him), you took a deep breath once again and looked at him with a frown and pink on the both cheeks.

“What was that?” You asked, and red-haired shrugged a little.

“You’re not starting a real match yet!”

“Before the game, I’ll take one more kiss for luck.” He answered quite seriously, and you felt dizzy. Your boyfriend was impossible.

… And quite cute when he was jealous. Not gonna lie.

I need to write akashi with a cat. I NEED TO.

The pics of GoM at their homes being chill had one where Akashi was holding a cat and I have concluded that Akashi is a catboy  loves cats. Akashi will get a cat, and he will pet it and he will get to love it and the cat will love him back and they will run away into the sunset.

Our princes in white suit ✨

#they look soooo good in white suit *sobs, #but i kinda feel like dying drawing the details, #so i gave up on the coloring one :), #kagami taiga, #akashi seijuurou, #knb, #kurobas, #kuroko no basket, #kuroko no basuke, #fanart
78 notes · See All
akashi-seikoText

Hello!I’m looking for a Kuroko no Basket roleplayer who can roleplay as Akashi Seijuro and they would allow Oc[Original Character]

BxG, If you prefer it to be BxB i can swap my oc gender to Male! If you wanted BxB

I don’t have any triggers when it comes to Roleplaying! If you do please let me know!

[This is going to be Romance genre]

If you have any rules please also let me know.

I’ll tell you the Plots!if not then we could Discuss together!

I’m Semi-Literate - Literate! But it depends on how the Situation is so it might be short. I’m using Third PoV.

For anyone who wants to roleplay Please do let me know, Comment/DM/AskBox. This Roleplay is going to be In DM btw!

You can add my discord! : 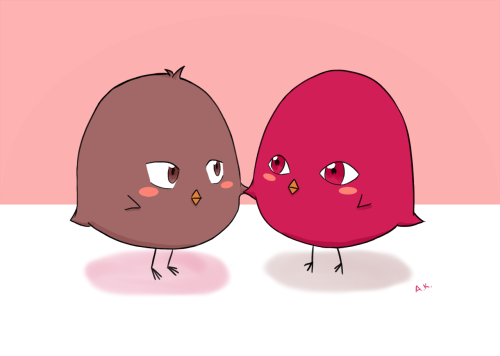 A more final version for the fic AU. Here’s akashi in a Kariginu!

#i will LITERALLY go on to my best friend about how much i HATE akamido yet here i am, #yes i change my mind a lot so what?? 😭, #like i love it and hate it at the same time????, #akamido, #akashi seijuurou, #midorima shintarou, #knb, #kuroko no basket
2 notes · See All
ultfreakmeLink
Show Chapter | Archive of Our Ownhttps://archiveofourown.org/works/25654672/chapters/66960682

Ahahahahahaha this chapter sucked the soul out of me but it’s FINE.

#wow finished in just a short time, #i was too lazy to recheck so here it is, #akashi seijuurou, #knb, #kurobas, #kuroko no basuke, #fanart
29 notes · See All
scenemidorimaText

#knb, #kuroko no basket, #akashi seijuurou, #midorima shintarou, #kuroko no basuke, #akamido, #they look rlly young for some reason?, #like they’re meant to be in hs in this but they look about 5 oops
8 notes · See All
juriyukiText

The god himself, Kamiya Hiroshi.

His voice brings me joy. I can listen to him all day. Especially love his voice when he plays the psychos.

Maybe no one would care about this but I just want to say I kinda lost my will to do detailed coloring recently. I found the truth that base color is also pleasant to my eyes too, so…. yeah maybe one day I’ll come back with a new style!

edit : I said I would like to upgrade this before but I changed my mind and this is it, the final form

@hkbs-world between Aomine and Akashi, I’d date Akashi for sure lol, I tend to be more drawn to the mature, intelligent ones (case in point: Mido). Also I’m not exactly Aomine’s type anyway 😂 I am (read: my chest is) quite.. small… hehe

As for Momoi and Riko, realistically I’d date neither as I’m heteroromantic, but if I had to choose then I’d go with Riko, seeing as she’s more of a tomboy :3