imagine getting in an argument with aki, but it ends with you in his lap, squishing his cheeks together, so his lips go all pouty ‘nd you lean forward to kiss him.

he grumbles about how he wasn’t done saying what he wanted to say, but you just smile at the blush dusting across his cheeks.

“you’re just too cute to argue with!” you say, nuzzling yourself into his chest.

you don’t mention how you notice the panic in his eyes or the rush of his heartbeat — you’ve been there. the fear of losing someone else — someone so important, over something so trivial — can consume you. you never want either of you to feel that way.

and so, you let the argument go. it doesn’t matter who put the wrong paper where, all that matters is that he’s close and warm and alive and happy.

honestly, i got a bit carried away ‘nd denji’s turned angsty, but please bear w me.

Hayakawa Aki layout & icons. Like/reblog if your save or use.

so i guess my type is tall, dark, mysterious, and good at making powerful shadow puppets?? tf 😭

“dear lord when i get to heaven, please let me bring my men”

Credit me, No copy/steal, or else say gdbye to ur ankle

pov you say something rude about makima

For my first string of posts, I’d like to give some anime or manga recommendations! Each post will feature a different series, plus a little about them and why I recommend them. (Everyone has different opinions, and I reserve the right to my own, as well as encourage you to share yours!)

I hope you enjoy the fourth installment!

(Note: As of today, January 26th 2021, to my knowledge, the anime is confirmed and is going to be handled by studio MAPPA. Since it’s not yet released, I will only be talking about the manga for now. Also, there is a confirmed Chainsaw Man sequel which was confirmed during  Jump Festa Online 2021. Its release date is still unknown.)

Our protagonist Denji fights devils with his pet chainsaw dog named Pochita to pay off the debt left behind from his late father. No, you did not misread that last sentence. Denji yearns for a normal life; he wants a girlfriend, and to stop eating burgers out of the dumpster. One day, the yakuza his father owed make him leave in the middle of the night to fight some devils. Once Denji arrived at the location, it turned out to be an ambush, set up by the yakuza. They were to bring Denji to another devil, who was supposed to give them money. A fight ensues and Pochita merges with Denji. (The merge isn’t something I’m going to go into in detail.) Denji then gains Pochita’s chainsaw ability and kills the devil who was acquainted with the yakuza. Denji then gets recruited by Makima, who runs a branch of an organization meant to protect humans from devils.

Sorry, for the long synopsis, but I felt it was necessary. In regards to my thoughts on the series, I was surprised at how much I liked it.  Tatsuki Fujimoto’ art was detailed, but not overly busy; it conveyed the necessary information without seeming cluttered. I can’t express my love for the art style enough. The one thing I was not overly fond of, was the pacing near the end. Some parts seemed rushed, and other slow.

This manga made me laugh, and also made me despair. While the characters may not all be human, they all display human nature, and was unexpectedly realistic. I didn’t think I would fall in love with the characters, much less that this would become one of my favourite series, but here we are.

At the end of the day, read Chainsaw Man. 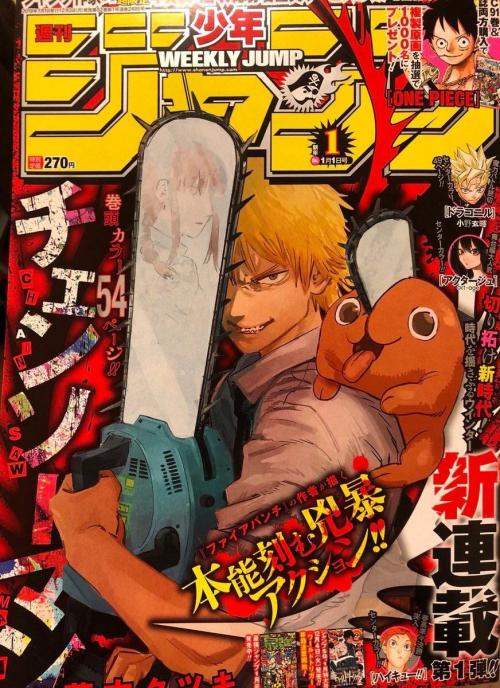 idk if this looks cool or like shit lol

warnings: all characters portrayed are 18+