Tumgir
AboutPrivacy Policy
AboutPrivacy Policy
Visit Blog
Explore Tumblr blogs with no restrictions, modern design and the best experience.
Fun Fact
Pressing J while looking at a Tumblr blog or home feed will scroll up on the page, pressing K will scroll down. This is helpful considering a lot of the Tumblrs feature infinite scrolling.
Trending Blogs
#albus dumbledore
bloodlooser
Text

I really love Albus as a character. he’s so complicated, strong and fragile at the same time. in some way he is the thin line between good and bad

• his hair is straight (and that’s the only thing his straight in 😂), intense red and quite long

• when he was a child his mother used to cut his hair off, and he hated it. he started to grow them right after the first year at Hogwarts

• his eyes are deep blue, and his look is sometimes like he’s not here

• he started to wear glasses at 12, his eyesight went bad after all his studying (and he studied sure A LOT)

• at first his glasses was just oval, but he got a present for 15th birthday from his friends - beautiful half-moon glasses

• he wasn’t allowed to wear bright clothes, yet alone a vivid ones, because his mother was strictly against it, since they lived among the muggles

• he hated boring clothes and as soon as he could afford some money he always bought something new, beautiful and crazy

• his lips are thin, his facial expression is usually like that 😊, sometimes it seems to be very ironical

• as for the clothes (again) Albus really likes to put on a lot of layers, different colores, absurd combinations, the wierder the better - but it should look nicely. many layers thing is sure for his psychological problem: he’s trying to hide himself like that, to hide his emotions, his true feelings, his traumas, etc.

• also he’s pretty vulnerable in so many ways, especially what comes to his family, personal feelings, the past

• right from his childhood up until the end of summer 1899 he truly believed that his family was a burden. he felt it with all his heart, he hated it, but couldn’t help it. he was an older brother, he couldn’t solve his family tragedies and wished he never had a family at all. only Ariana’s death opened his eyes on how wrong our wishes can be

• when Aberforth was born, their mother said to young Albus “you’re an adult now, Albus. act as one”, and this was the way Albus was treated at home. be serious, be strong, don’t disappoint your family, you’re an adult. it sure affected him in a bad way and ruined his childhood maybe. it got much worse when Percival Dumbledore was imprisoned.

• he felt really stressed before Hogwarts, and was stressing even more when his first year started

• however, Hogwarts was great for him. he fell in love with his school from the first step inside

• Elphias Doge became his first and the best friend

• at his 15s he started to realise he’s gay. he told Elphias about it, and Doge supported him

• speaking of secrets, Albus has quite a lot of them, and he’s pretty closed person because of it

• he was trying to express himself through perfect studying, becoming the best of the best, and he felt like magic was all his life, and also cared a lot for people who’s with him (cared even more after the summer 1899)

• actually, he was a star at school and felt like nothing when he was at home

aaaand stop. I think I will do some more soon, I’d like to write some ‘Al&Gel together’ headcanons and maybe even some nsfw ones 🤔

I don’t know how people can look at Dumbledore, someone who saved the world not once, not twice, but three times and conclude that he’s a bad person. I really don’t get it. If anything, he’s the best and most moral character in the series.

I hate the enemies to lovers trope. I prefer lovers to enemies. Perhaps that’s why I love Grindeldore so much. 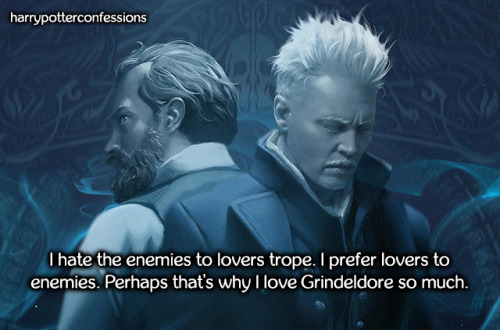 With other authors I would be comfortable with saying that the Snape and Sirius parrallels had authorial intent, but with Rowling I’m not so sure.

The fact that she didn’t intend for Voldemort, Dumbledore, Harry and Snape to be stand ins for the three brothers and Death boggles the mind. It truly does. This isn’t just some small detail. This is a huge parallel that she apparently stumbled into by accident. It makes it so that unless she confirms it herself, it’s impossible to know if there was authorial intent or not.

You know what will never sit right with me? The fact that Ms Figg knew Harry was severely neglected, possibly even abused. In the fifth book she apologised for making his time at her house hell, saying that the Dursleys never would have let him come otherwise. She was sent by Dumbledore to keep an eye on Harry, and she knew he was neglected, which means that Dumbledore most likely knew as well.

I’ll go where you go

I’ll do my Gellert Grindelwald headcanons first, then Albus Dumbledore’s 💜

((some of headcanons will be mixed between them, since I like to compare them two))

IMHO: first of all, I don’t like the way Fantastic beasts portraited him. I don’t like Depp’s Gellert, not his appearance nor the way he performed GG. I have nothing against Johnny, I love many of his works, he’s pretty talented, but his Grindelwald just didn’t work out for me at all. (for everyone who really likes JD Gellert: I respect your opinion! no offence)

personally, I believe his GG is way too dark, emotionless, too flat for me. the thing is that in my head GG is very bright man, vvvvery charismatic, adorable in some way, that’s why he was so successful with his ideas and had so many followers. as for me, he’s much more lighter than Lord Voldemort, like his idea was “create a better world for us”, I do believe that he really put it like that and was sure he does the right thing. he’s really delusional about himself, and I also do believe his path always had a point about Albus coming back to him. yes, I’m sure their love wasn’t one-sided, my headcanon is that Gellert was passionately in love with Albus too (‘after all this time - always’, yes, just like that)

• sea-blue eyes, pretty big. he puts some mascara on or something like that to make them look darker and put more contrast to his face, since he’s a blond and his eyelashes are golden too

• his eyebrows are golden too, only a darker shade

• he’s tall, but Albus is taller

• he’s in good shape, since there are a lot of physical training in Durmstrang

• his look was always quite androgynous, he still looked pretty young at his 30’s

• GG didn’t have a lot of facial hair because since he’s a blond facial hair are too weak to grow properly, some stubble is his maximum

• his look was not really evil or gloomy, but he had always preferred black clothes because he find it very stylish (and he’s a stylish motherf**ker)

• his nose is upturned a bit

• his mouth is large, but lips are thin (the mouth of a liar)

• he’s a little bit more beefy than Albus, has more physical strength and more experienced in real life (not only books and school) by the moment they met

• he’s very smiley. at the age of 14-15 he was quite gloomy, had a lot of troubles with his mother, which affected badly on his mental health

• after he got dumped from school, he left his home and became all smiley and emotional again soon

• as I’ve said, he was very bright young man, although pretty dark on the inside too

• his emotions are always on his face, but he’s pretty good at using them for his benefits

• his anger issues are STRONG

• he doesn’t really realise that’s a problem, even after the duel he’s very delusional, like “who’s fault was that? definitely not mine, right?”

• doesn’t usually pay attention to his flaws, like he’s a pure perfection (his mother grew him like this, be a perfection or die already)

• Ariana’s death was a trauma for him too, and affected him very badly

• he got all messed up after the loss of Albus, deep inside his soul he was sure it’s all his fault

• he just decided he had to go on alone, and when he finally create a better world Albus would return on his side

• I also do believe he was planning to ressurect Ariana from the dead, at least for the first few years of his way to magical supremasy

• but you know, the deeper into the woods

• the closer he got to his goals, the more twisted the goals get (I’m sorry for bad English, I hope I’ve put it right 😅😅😅 or at least understandable)

I always think about this meme. About the fact that this is totally wrong, You guys are forgetting that Dumbledore is gay. So let me edit this meme.

Thank me later… no, actually do it NOW.

I think maybe I should share my headcanons about Gellert and Albus?

hey, I got much feedback from you guys lately, THANK YOU SO MUCH 🥰

right now all these drawings are part of my therapy, I’m trying to find myself again because I’m shattered

so thank all of you so so much ❤️

DA WAND SCENEEEEEEEEEEEEEEE. Look for the ones who dont know what i mean or the ones who havent seen tha Harry Potter movies, there is this scene on the half-blood prince, after Dumbledore death, when everyone just rise their wands to the air and perform lumos to comember him, and for some reason it always made me cry, of course, i havent seen the movie in a while but i remember that feeling.

(after i drew this my sister came up to me, in tears, cause today was the 5th death anniversary of Alan Rickman and I didn’t knew when i did this, and she saw my drawing and break down harder, what should I suppose to do? HELP) 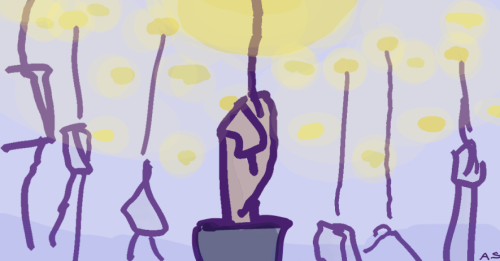 Aha! Now I can once more assign a title! Consider yourself the…uh…Fantastic Anon! Yes, it’s perfect!