You laid sleeplessly in his bed. These days were so lonely, Jasper and the wolves were always fighting, and in the daytime, Ava trained you in magic.

You’d made quite a bit of progress, but it always drained you physically. Being a witch was not as easy as they made it out in the movies. It was about refining your energy, making sure a face-full of gravity didn’t hit you in the face and incapacitate you. You’d done that a couple of times already.

The limits of being a witch was still undefined. Because you and your sister were only half—as were most modern witches—there were still so many things and spells you couldn’t access or perform. Still, Ava knew how to do just about everything.

She could fly and shadow travel for short distances, was completely impervious to all human weapons, could breathe without oxygen and create breath-taking illusions that could completely fool and take down an unsuspecting vampire. You barely even knew how to affect the temperature around your body, much less create fire—the new skill she was trying to get you to master.

You would never be ready by the time Preston and Maria arrived.

the fact that Carlisle “I don’t relish the thought of killing another creature” Cullen is the one who starts the fight in bd pt2 bc the volturi threatened his daughter???? that shit breaks my heart every time

The look of heartbreak that was on Edward’s face because HE proposed to Bella only for her to kiss Jacob in front of him the NEXT day because she didn’t want him to leave?!?!

alice cullen throws the biggest, bestest, most extravagant halloween parties and you cannot change my mind!

credits to @scarteIIa on tt.

I like how all the actors in Twilight are aged in the wrong decade.

Carlisle and Esme, who are supposed to be in their 20s, their actors were in their 30s

And Dakota, who was an actual teenager was supposed to be like 12

hey so… yeah alice’s gift is amazing but… no mentions how scary it must be too. like seeing the future? sure, they said she only sees possibilities because the future can change based on your choices. but she saw the cullens and she saw jasper a long time before meeting them. imagine if you knew your destiny, knew where you belonged before ever seeing that place. she knew nothing about jasper but he was her soulmate? it feels more like a duty than a destiny. she had to find jasper, she had to turn him vegetarian, she had to find the cullens. of course things went well, thats how it goes in smeyers story. but i dont find it… that cute? again kind of creepy. NOT AS CREEPY AS IMPRINTING THOUGH. she did the native americans far more worse. we have talked about the racism, we still talk about it and we will continue (as we should, call her out!!). but i havent seen anyone say a word about alice. i dont know if what i said makes sense

Can I Have A Part 4 For Focus On Me Where Reader Stopped Singing Because Of The Stress Of Singing InFront Of The Volturi, and Their Guests. The Cullens Notice Reader Stopped Singing Which Worried Them A lot Since Reader Sings All The Time In Front Of Alice. Edward, and Jasper Explains What Happen. Alice Goes To Reader Apologizing To Him Reader Says It’s Ok But He Says He Won’t Ever Sing InFront Of The Volturi Ever Again. Only For Alice, and The Cullens. Take Your Time No Rush To Do It

A/N: I hope you liked this!

Singing out in front of a whole crowd really made you feel uncomfortable. You never wanted to do that. So you figured, nobody can force you into singing if no one ever heard you. You had became mute.

You didn’t even sing for Alice anymore.

And you could clearly tell that she was noticing it.

Edward had tapped into your thoughts, and he heard how uncomfortable you were.

“They weren’t comfortable singing in front of everyone like that.” Edward whispered to Alice.

“I’ll talk to them.” And just like that, Alice had vanished.

You were laying on your bed when Alice busted threw the door.

“Alice, you couldn’t have knocked?” You said sitting up.

“You aren’t going to sing for me anymore?” She blankly said.

“You made me really uncomfortable at the gala, Alice.” You said furrowing your eyebrows.

“I didn’t mean too!” The pixie like girl said coming to sit next to you.

“You know I wouldn’t do anything to make you uncomfortable.” Alice said rubbing your back.

“Fine, but I’m only singing to you!” You said smirking.

“I can live with that!” She said bringing you in for a kiss.

“Only you!” You breathed out.

“Only me!” She said bringing you back in for a kiss.

currently rewatching bd part 2 and that scene where edward and bella literally rip each other’s clothes off? that’s the real reason alice throws all the cullens clothes out after one wear

she never had to replace edwards before obviously

me as a kid: why am i so obsessed with rosalie from twilight when i’m supposed to like edward or jacob

I had this account for less than a week and I already have 100 followers. This is crazy, I thought making a Twilight account in 2020 was a too little too late, but this shows that the Twilight fandom is still vibrantly alive to this day!!! You guys are so vocal too. I love seeing the passion you guys have for this series. Wether you loved it, hated it, have a love-hate relationship with it etc. You guys have so much to say about this dumbass series and I love it!

Never loose that fire in you! Love you guys!

Can we discuss the fact that Breaking Dawn is honestly quite a disappointing book? I love the Twilight books wholeheartedly but it feels so rushed like smeyer was just tryna get it over and done with. The first two actually allowed the reader to engage with the characters. The emotions they felt you felt. The imagery of the scenes and settings were vivid and you essentially became a part of those books. BD just like kinda washes over emotions and shit.

the baseball scene in twilight drives me crazy. edward can hear james and knows he’s a powerful tracker dead set on killing bella. alice can see that he’s about to get real invested in this hunt no matter what they do. they’re 7 on 3 and conveniently located. what conceivable reason does he not have for just murdering james on the spot?? alice could even see if they’d lose someone or if bella would be hurt before he actually attacked. just yell as esme/carlisle to take bella and run to avoid a whole big drawn out hunt that you know he isn’t going to abandon. even with the two of them gone and rosalie not fighting (although you know she’d defend her man) its 4 on 3 which includes a literal mind reader and war vet

The Twilight Saga: Eclipse - “You don’t have to be psychic to know how this movie’s going to do,” she says. “Obviously, it’s going to be a hit.” 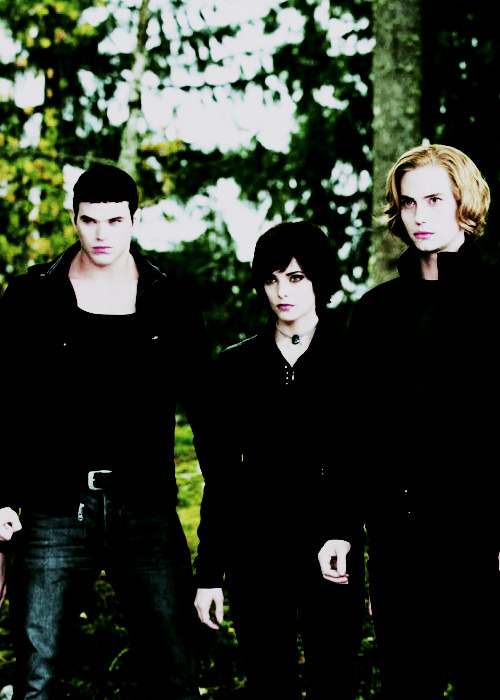 no offense at all to my parents but. kinda wishing esme and carlisle were raising me as their lil vampire child rn and rosalie alice jasper emmett and edward were my siblings. just an idea x