Thoughts on the Pilot.

I will be continuing the show as it does seem interesting and KIANA LEDE! but I hope it gets better quickly. I know it isn’t fair you judge a show completely off it’s pilot but the first episode is meant to hook and this leaves much to be desired.

All About the Washingtons: “Yo! Bum Rush the Secret Show” 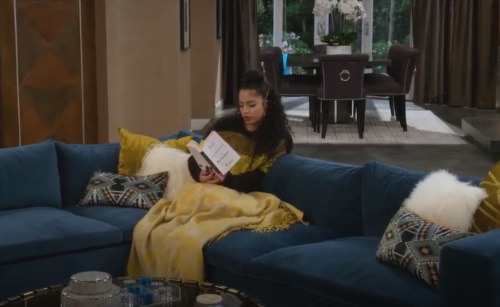 I tried to make a gif, but i don’t think I did very well…

All About The Washingtons (Netflix)

Logline: After Joey decides to retire from a long career as legendary hip-hop royalty,​ ​his wife​ ​Justine takes advantage of the opportunity to pursue a career of her own.

In 1986, Hollis, Queens hip hop trio Run–D.M.C. raised hell, proving that rap was far from a fad. Amongst 80s rap classics like “My Adidas” + “It’s Tricky,” their rap-rock cover of “Walk This Way” became the first hip hop song to crack the Billboard Hot 100 top 5, mainstreaming hip hop for years to come. Though the group never achieved the same success, Run–D.M.C. are hiphop icons. Joseph Simmons was ordained as a Pentecostal minister, adopting the name “Rev(erend) Run,” and eventually parlayed his success into a successful reality TV series with his wife Justine Simmons + his children called Run’s House (along with DIY/HGTV’s Rev Run’s Renovation + Cooking Channel’s Rev Run’s Sunday Suppers). Now, his well-tested personality is being applied to a semi-autobiographical scripted sitcom with mostly successful results. There is a bygone lightweight quality to the jokes, setups, and relationships, almost as if there was a conscientious attempt to create a bubble world safe from the larger social justice issues and show stock family comedy. It’s the anti-Roseanne. Not to say the series is vacuous: ageism, nepotism, retirement, and women’s empowerment all get brought up to varying degrees of success.

Rev Run + Justine Simmons have great chemistry as Joey + Justine, though the acting is sometimes a bit rough but improving throughout the episodes. Justine, embarking on her own business after years, nails some of the funniest comedic moments + Rev Run, as expected, nails the music. Kiana Ledé + Nathan Anderson (black-ish’s Anthony Anderson’s son) get the most heavy lifting as the oldest kids, Veronica + Wesley, getting to make their own music. Leah Rose Randall is a little wooden, but her extra-smart teenager Skyler is a fantastic, underseen archetype. Maceo Smedley’s youngest sibling Daevon has a precious lisp + a great attitude. Tim Meadows, Arsenio Hall, and Sinbad all make appearances too.

The fourth episode, my fave, saw Justine’s business getting off the ground in the club as Joey tried to do a secret show at the same club, with a silly kids subplot. The pilot set stuff up very easily, even if the jokes were pretty straight-forward. The second episode’s funniest plot was Veronica trying to figure out why he boyfriend has a bridal magazine. The third episode had the best conflict thus far as Veronica’s singing gets more attention on Wesley’s track, with Skyler trying to teach Daevon to dance.

Things are easy. Too easy. No drama is too insurmountable within the tight 20 minutes per episode. Everything is sitcom-pleasant + cotton candy-fluffy, nothing particularly bad, but nothing particularly outstanding either. Even if the series stays mostly at the surface, showcasing a black family, a still-too-rare sight the world should see, is an important step. Coming to Netflix after being passed on at ABC, perhaps All About The Washingtons will take on some of the TV-dinner-watching-family crowd Modern Family will soon vacate. AATW might not be king of rock, but it’s kinda not going out like that either. Wary carry.

Does “All about the Washingtons” get better? Because the acting in the first episode is… yikes. It’s just a bunch of people saying lines.

Literally only watching All About the Washington’s on Netflix cause Kiana Lede is in it and she’s cute af.

#kiana lede#all about the washingtons
11 notes