Trending Blogs
#all for one
itsnothingofinterestText

Wait, is this thing happening here:

The same as the thing happening here?

‘Cause if so, that means that not only was a lot of this:

not actually injuries inflicted by the heroes; but also for the entire fight, Shigaraki was not only fighting 1 V 9, but he was also suppressing AFO the whole time too. This was more like a 1 V 10 that he was still winning.

If he doesn’t come out on top at the end of this arc I’ll be so disappointed, because no one has earned this win more than Tomura.

All for One and One for All are now directly connected, and Deku has been the traitor all along.

Deku, of course, has never realized this. Hell, I don’t think even All Might knows about this. That the reason why he and his friends have been pursued relentlessly by the villains is because of the connection that All for one and one for all have. Everything that Deku senses, All for One senses.

If that’s true, than for the course of the entire series run, Deku has unwillingly been a puppet for All for One’s games.

All for one ain’t got no eyes, so Deku is his eyes.

Wherever Deku went, All for One knew exactly where to follow.

Whoever Deku was close to, All for One knew exactly who to hurt in order to get the most anger, the most power, out of him.

All this time people have been speculating who the traitor is, but we never stopped and thought for a moment that the main character, our love able Shōnen protagonist, the greenest bean of our lives might have been the unexpected traitor this entire time and has been used to cause unreliable harm to both his friends, teachers and pro-hero’s alike.

That feel when you work in news in this year & you can’t write fast enough to beat MHA spoiler day.🙃

It begins. I put a lot more effort into this year’s event and I’ve spent a month accumulating what I think are some of my best work. I experimented a lot with some of my pieces and some of them I didn’t, but either way, I hope you all enjoy this lovely angst-fest! 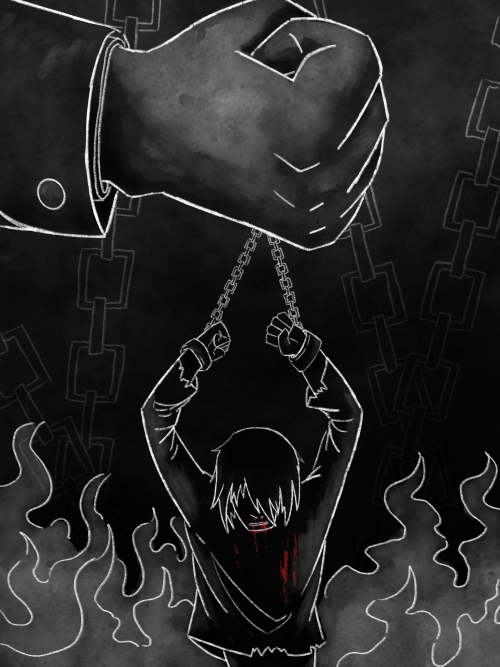 Will it be the hidden quirck?

#bakudeku, #bnha, #bkdk, #deku, #midoriya izuku, #katsudeku, #bakugou katsuki, #my hero academia, #boku no hero academia, #mha, #mha286, #Kacchan, #wonder dou, #dekukatsu, #one for all, #all for one, #all might, #en tu órbita, #I'm crying and smiles in this moment, #bokugou have to live, #the bakudeku is real
58 notes · See All
simplysparrow14Text

This is some Junji Ito type shit and I’m not here for it!

MHA is trending at #4 peeps. What a wonderful day! 😂

#bnha, #mha, #my hero academia, #boku no hero academia, #bnha manga, #izuku Midoriya, #bakugo katsuki, #eraserhead, #all might, #all for one, #one for all, #gran torino, #nana shimura, #shimura tenko | shigaraki tomura
6 notes · See All
the-tiddlesmajorisText

Chapter Title: One Among Us

Bonus: THATS FREAKING AfO’s CREEPY FACE INSIDE OF THERE AND ITS NOT O.K.

(Guys I am sorry if this seems messed up, I just woke up and saw the leaks and I couldn’t help but write smth. If you get what I am saying that’s awesome lmao.)

What I am expecting?

Maybe Nana intervened because she saw Deku losing chill and getting progressively angrier by the second, and now she wanted to help him control it so OFA doesn’t backlash at him. That thought crossed my mind when I read this in the summary:

If Deku doesn’t pull his shit together soon, the consequences will be severe. As it is inclined.

Maybe Nana will control Deku’s body just like AFO is currently controlling (possessing) Tomura’s, but most likely Deku will willingly let her take over unlike a certain fucked up bastard.

And Maybe, Nana will be able to wake up Tenko as well. Think about it, they are in the vestige area in OFA, and across them are AFO and Tomura who’s struggling to convince himself that he’s in control not AFO. Deku is watching and he IS terrified, so who’s to say that Tomura can’t see what’s happening on Deku’s side as well?

I think Tenko Shimura could wake up and starts fighting back against AFO if Nana actually talks to him, and if he listens. I know she tried before when he first was awakening, but who knows something might’ve changed now.

My thoughts are: Nana will fight AFO using Deku’s body, and Tenko (Tomura) fighting off AFO’s control from the inside, hindering his ability to fully control his body. And to he quite honest that would be so fitting for Tenko.

In this war there are no heroes or villains, there are people who are fighting against a madman, a devil playing God.

After all, everyone’s a victim of the system HE created.

Think about it, he has been around since the manifestation of quirks, ruled over Japan in time of crisis, as it goes by the story All Might told about OFA’s origins and the vision Deku sees in chapter 193 if I am correct. In a nutshell, society right now is classifying people and their worthiness the very same way AFO did back then.

People with great quirks counted as amazing and useful to him, praised for simply being born with a useful quirk to him. (See Bakugou).

Others had no quirks were counted as weak or had no use for him whatsoever (with the exception of the brother of course). (Midoriya).

And even others who hated their quirks but were forced to live with them anyways. (Todoroki).

And these kids are just a sliver of the whole actual mess. This system has been going around for a century! Imagine the amount of people who suffered from one mad man’s mentality?

This among us thing is getting out of control. Completely.

#my hero academia, #my hero academia 286 spoilers, #izumi midoriya, #among us, #AFO WAS THE IMPOSTOR, #ALWAYS HAS BEEN, #shigaraki tomura, #all for one, #katsuki Bakugou, #chapter 286, #boku no hero academia
40 notes · See All
izukukuziText

i literally just woke up and the FIRST thing i saw was afo’s weird ass fleshy face INSIDE OF SHIGARAKI??????? HORI WHAT THE FUCK IS THAT (very interesting and disturbing) SHIT??????

WE’VE REACHED THE CLASSIC EDGE FASE OF THE MANGA!

So let me share some appropriate music along with it 😈:

“You do not find a happy life. YOU MAKE IT.” -Camilla Kimball