“hannah, don’t you think a sunny side up egg is pitiable? its shell is broken and it’s forced to publicly show an indecorous appearance. then it becomes an eyeball, internal organs, or a plume. and i rob it of any and all possibilities.”

I binged Black Butler. No comments.

And so I also drew ‘Sebas-chan’s~’ fanart.

O!Ciel Phantomhive and Alois Trancy What Is This Feeling from Wicked!

I had this idea literally a night ago when listening to this song and hearing the beginning and thought, “Yep. It’s these two!” 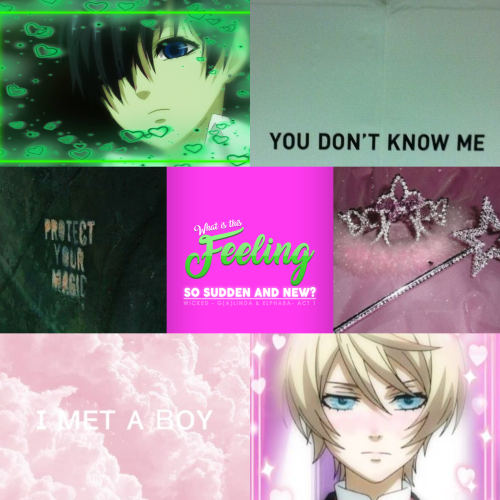 when ciel’s memories were being blended with alois’ while under claude’s care, claude did everything he did to take care of alois to ciel. at the end of that, he kissed ciel’s foot. THIS PARALLELS THE BATHTUB SCENE WITH ALOIS. WHAT WOULD HAVE HAPPENED IF ALOIS WAS PRESENT IN CIEL’S BODY DURING THIS. FUCK CLAUDE.

ronald ur dick looks heavy, let me hold it for u 🥺🙏🏽❤️

I made a uquiz about black butler because I think its funny to rewatch things you liked when you were 11. Here is it if u are interested https://uquiz.com/Qx3xIL

what black butler character are you
i was obsessed with the anime in middleschool and i'm having a mental breakdown rewatch with my bud :) this is based on my correct opinions
uquiz.com
#This is for funny sorry everyone in this fandom#Black Butler#kuroshitsuji#gonna tag the characters that are answer choices for clout i think#ciel phantomhive#Sebastian Michaelis#elizabeth midford#alois trancy#claude faustus#william t spears#undertaker#grell sutcliff#uquiz#have fun xoxo
92 notes
juliusmarion
Text

Come join if you want X

Me thinking about what to talk about next to my therapist : *mentally look at important subjects boxes and move the giant Alois Trancy & Ciel Phantomhive one a bit to the left* lets see, lets see… hm… I can’t think of anything just like that…

Has anyone ever noticed that in the season two introduction for black butler when Claude touches Alois, Alois draws him closer and Claudes face still remains unmoved. When Sebastian touches Ciel, Ciel pushes him away and yet Sebastian has a fond smile on his face. This really shows the relationships between both pairs to me.

I have this theory about why is Alois even more disliked in the french fandom and its because his dub voice is absolutely horrible.

“Away in a small quite town, deep within their ever long forest of dark trees and cold waters is a legend. A legend of a young boy who’s life was never pleasant nor easy to control or bare. Some say he had what many call a weak heart, constantly hiding from the pain of fear of it being broken… Until he found a strange mysterious handsome man who he fell deeply in love for. The man however caused the poor boy pain when he one night lured him into the woods and chained him high in a tree by his wrist, torturing him nightly when he returns from town in the morning…Before he killed him. All say that his ghost wanders the forest every night in search of the man who took away his trust and life and will easily take anyone who dare resembles that very man…”

I ended up writing a Black Butler Ghost Hunter AU for no reason besides I miss and love Halloween!
This edit took FOREVER to do and finish(My fingers hurt ow..)

You’re all free to use this edit for anything as long as you give me credit and share your post with me :3 and you’re more then welcome to come up and share your own spooky story of Ghost Alois you see fit instead, that was just my sister’s version 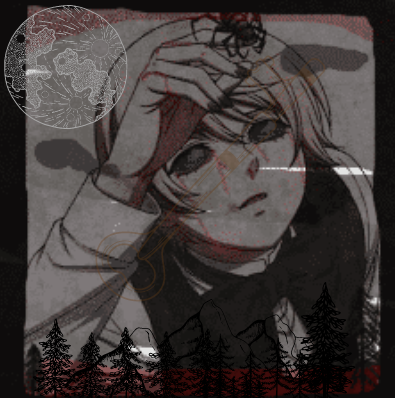 I’ve seen so, so many characters die, so many of my comfort characters get killed. But, Alois was different for me, I honestly didn’t think that his death would affect me this much. He’s just a drawing, and I understand it’s weird to feel like this for a freaking piece of paper, but it hit me hard.

He just wanted love, he deserved love. He deserved the world, instead he was tricked into a contract with a demon who didn’t even want his soul. A demon, who loathed him. Claude killed him after Alois confessed his love for him, Claude, the demon who he was in a contract with for the price of his soul, and the bastard didn’t even take it in the end, Hannah did.

Alois was a comfort character of mine that i felt a connection to, I could relate to him. No I wasn’t r@ped at a young age, but I really just wanted love. Sure my parents are there and the rest of the family. But I had ‘friends’ who left me in the coldest parts of my mind. I constantly got the cold shoulder from them, they made a joke once, it went like this.

One person stood in front of me, another behind me. The person in front of me ran in my direction, just to push me aside into a wall and hug the person behind me. They then proceeded to laugh at it like it was funny. The girl behind me told me she knew how I felt at the time and only laughed because the other girl did, but it still hurt.

They would constantly turn on me, blaming me when a rude nickname came around the school about 3 of them, making me the bad guy in situations I wasn’t even involved in.

Once I went into middle school, I had cut off those friends and became friend with some girls who had a lot in common with me. My friends from Grade school came back and made friends with those girls and then turned them on me.

After that, I made friends with some kids who sat at the bad, quiet corner of the lunch room, we we hung out every day. Most of us were in Art Extensions so we spent most of our time together there.

Eventually the pandemic hit and we haven’t seen each other since, in person anyway. After about 5-6 months into quarantine, I made contact with one of them.We began facetiming often and for hours a day, Eventually I discovered my sexuality, with their help ofc, and later on we began dating. We are to this day, and I can’t thank them enough for staying with me.

That’s why Alois is one of my comfort characters, he understands how it feels to be alone. In the end, Love was his undoing, but I love him nonetheless. It makes me sad knowing that the people we love in this cruel, cruel world, can be the very thing that ruins our lives.

Alois is s2 was like : i finally made a friend and im going to beat the fuck out of him.

Me: Feelings? Whose she?

Also me: *Bawling my eyes out watching Alois get murdered*

My friend who made me watch Black Butler doesn’t like Alois Trancy! He is my favorite character, and when you look into his past and see everything he’s been through it is genuinely heartbreaking. Am I in the minority for liking Alois?

“The young master has such a sweet soul.”

So does anyone else have modern school Black Butler headcanons too or?

I personally see among the Unlikely Friends(what me and my sis call O!Ciel, Alois, Lizzy, and Doll plus Sieglinde in some works) going and doing all different afterschool stuff and clubs.: O!Ciel in chessclub or something lowkey dorky Alois and R!Ciel will tease him, Alois in dance or maybe a male cheerleader lbh, Lizzy cheerleading or sprite committee(GO PRIDE), Doll in school volunteer work such as car wash bake sales pet care etc.

But they all teach each other something no one else outside the friend group could ever believe…
O!Ciel helps at times with Doll’s volunteer work, Alois teaches Lizzy and O!ciel some moves from his after school stuff, Lizzy gets permission from Alois and Doll to practice stuff with them if needed, and Doll is learning how to play chess through O!Ciel

I’ll continue with these kinds of headcanons but I wanna see what you guys think!
Also for each time I do this I will tag three people to share their thoughts as well, but of course even if you didn’t get tagged you’re more then welcome to reblog/share your headcanons as well, and my three first taggers are: @crimson-violets and @grelle-sutcliff plus @grelleswife You three are fine not doing this if you don’t want to so no worries

Sebastian being like « I will show you how i bake this cake its actually really easy » and Ciel nodding along but is head is slowly filled with elevator music.

Claude showing Alois how to knit and Alois smiling and nodding but he is basically hearing niania and seeing magic.