Me, a month ago: omg this carpool karaoke with bts is so fun!!! I can’t believe I only saw one of their mvs and that was it! Let me check more of their songs and maybe learn their names

Me, now: bts is the greatest thing ever, I love every single one of them, they’re the most talented group of people to ever walk this earth, I’m spending most of my time watching them on YouTube, they are my happiness in the middle of this pandemic, how long until I start learning korean,

Shh he is sleeping

#where are the DAMN adoption papers?!?!, #also, #naruto shouldve been the 8 tails because hes a fucking octopus
37 notes · See All
traderjoeslesbianText

#tipsy on shabbat wine which is technically legal even though im under 21 bc its religious, #ALSO, #i know that doesnt MATTER, #and i shluldnt be WORRIED about being 20 and perhaps having an ALCOHOL occasionally, #but im neevous what can i say, #ok to rb
6 notes · See All
yes-asilAnswer
got anymore songs that you listen to while laying down on the floor? i'm gonna make a playlist of those lmao

#ask, #anon, #my music taste is all over the place, #also, #the first song fits Lukas, #I bet you guys would have thought I'd say Matt but sike
9 notes · See All
shhhhyoursisterAnswer
compromise for davenzi maybe if u wanna idm ty

im sorry that im totally using this to project, but i have been playing so much animal crossing and i had this idea and im SORRY

“Babe, you’ve been playing for hours, I thought we were going to watch a movie tonight!”

Matteo looked up at where David was sitting at his desk, now turned in his chair so he could pout at Matteo sitting on the bed.

“I told you, I’m trying to get enough things to donate so I can have the museum!” Matteo said back, rolling his eyes because he knew David didn’t particularly care about video games the way he did, but it was still frustrating. It was important.

David huffed and spun back around in his chair, angrily clicking a few keys on his laptop. Matteo rolled his eyes again at his boyfriend’s dramatics, before casting his fishing line out, cursing when the fish swam past it.

“Can you tell me what movie you were thinking of? You said you wanted to choose tonight, i can at least pull it up,” David said, clicking more on his computer, no doubt pulling up a random streaming site.

“Uh, yeah, let me just remember what it’s called,” Matteo said, focused on trying to catch the moth he saw flying around the light outside his tent. He didn’t actually have a movie in mind, and was trying to think of one fast.

A couple of minutes went by where Matteo forgot what he was trying to think about, too focused on getting one last new fish or bug, and he heard David turn around again with a sigh before he asked, “Matteo, please? Just name a movie you want to watch.”

“Okay, yeah um,” Matteo started, but paused when he noticed a fish in the pond in the middle of his island, and he cast his line out, “uh, we should watch…” he continued, and then paused again so he could press the button at the right time, and when he caught the fish and saw that it was one he didn’t have yet, he exclaimed, “fuck, yeah!”

“Oh my god,” he heard, before hearing a dull thunk, and he looked up briefly to see David’s head on the desk,

“Okay, okay, compromise,” he said, putting the game down and fixing David with a serious look, “you can choose the movie if you give me 15 minutes to finish this, and then i promise i’ll give you and the movie my full attention.”

David glared at him but then sighed, and said, “Fine,” and Matteo grinned and turned back to his game, and chose to ignore David muttering under his breath, “I hate Animal Crossing.”

#davenzi fic, #davenzi fanfic, #davenzi, #druck fic, #matteo florenzi, #david schreibner, #noggins, #ive been playing so much animal crossing, #and i can totally see matteo vibing with it, #also, #autistic!matteo, #i love getting so hyperfocused on animal crossing i play it during my big family zoom chats
10 notes · See All
my-name-is-babyyText

#personal, #selfie, #me, #i know you must be tired of me showing my ass, #but hey, #i have self issues, #and i'm working on them, #also, #i wear the most boring ugly underwear in the world
65 notes · See All
ilovethatforyouText

I’m sad, cause I just realized that last year when I joined this fandom, their were so many Starkid blogs that I looked up, and now I barely see any of them on my dash any more. and I absolutely love all the new friends who I’ve made more recently, but I really miss the good old days of looking up to like, 4 core Starkid/TCB/shipwrecked blogs that I can’t find anymore. I really hope that they are doing amazing right now, cause I Stanned them then, and I still Stan them now, what ever they’re doing now.

#if anyone knows where:, #debthestoner, #declans dumb, #moonieblimp, #and i thibk it had something to do with, #notthelattehottay, #i think?, #went, #please tell me, #also, #remember jon matteston looking uncomfortable?, #that blog?, #iconic, #and give Robert manion a tony, #they were also iconic, #i stan, #sorry, #i just miss seeing those blogs on my dash, #idk, #anyway, #GN Y'ALL, #SLEEP TIGHT
1 notes · See All
out-of-my-way-extrasText

Day 1 of ?? Of visiting Sof’s (@myherowritings )island in Animal Crossing

#maddi speaks, #this game is so cute, #i love it already, #also, #if u wanna be friends on there, #hit me up, #acnh, #animal crossing, #animal crossing new horizons, #sof tag
39 notes · See All
asheniousPhoto

Instead of making something for the 18th anniversary of Kingdom Hearts 1, I made this….completely self-indulgent work that’s going to be the basis of my next story. I literally am only proud of the head shot here, and can only draw ref sheets as of recently which is frustrating. Also, just ignore this, this is literally only for me lmao 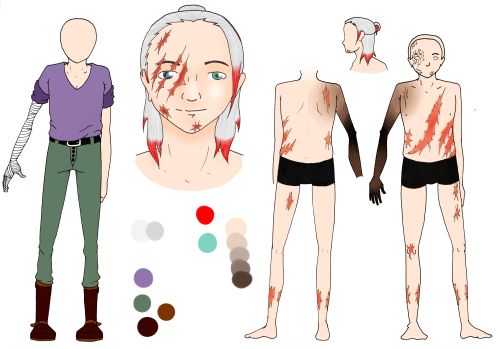 #ashen ramblings, #my art, #tag talk, #Look, #I am still a child and I still imagine shit before bed, #this came out of that, #and it, #hopefully, #makes a good story when I get around to writing it, #I've been on a drawing thing this week, #hoping to get some KH stuff out of it at some point, #I've also learned the basis of my special interests, #do I want to put myself in the work?, #if yes, #most likely special interest, #lmao, #also, #the hair is too red, #I realized too late it didn't match the muted pallet, #might go back and fix it later, #might, #ref, #the witcher
0 notes · See All
hundredspeechesText

Should I watch that Tiger King show? It looks wild.

Just saw my current notes on my recent drabble and

#also, #thank you so much for the love, #first drabble in a while
0 notes · See All
youruinedmylifebynotbeingrealText

@people who are complaining about how “expensive” the Arcana is how they should have plenty money from us to make Portia’s route - I have never spent a cent on the game and have 15,000 coins. I have 50+ keys. Granted, I only have spent my coins on Asra and Portia thus far (therefore rarely spending keys). But I know that that is PLENTY for me to play all of the routes if I chose to. And that number grows every day.

The devs give us PLENTY of options to get coins (and keys!) for free. EVERY. DAY. If you do them, you WILL get coins and keys. So don’t EVEN let me see you complaining.

#the arcana game, #the arcana, #thearcanagame, #thearcana, #portia devorak, #pasha devorak, #portia, #pasha, #personal, #saveportia, #save portia, #also, #fans literally dictate whether or not a book or a route comes out, #look at choices and lovestruck, #books and series and routes that dont make a lot of money?, #dont get sequels, #dont get more seasons, #and thats that!, #so at least theyre trying to let us save her, #instead of just canceling
25 notes · See All
captainallthingspurplemeText

Rules: Put your entire music library on shuffle and list the first 10 songs that come up. then tag 10 others to do the same!

So…I don’t really have a “music library” as much as I have…10 billion music stations I listen to. So I’ve randomly clicked on each station to see what pops up first on Pandora (I have recognized approximately 1% of the music you all have been listing on this)

Tagging @blainesebastian because I’m so curious to see what your music taste is like!

Also tagging @johnisntevendead, @kylorenvevo, @hereliesbethboland because I don’t think I’ve seen y’all do it yet, but anyone else who wants to do it, consider yourself tagged by me!!

#this was fun, #also, #i have the widest range in musical taste, #hahaha
5 notes · See All
ocheabutterPhoto

#was meaning to gif this scene forever, #and then factoffictionwriter mentioned it so i had to do it, #also, #i actually remembered how to make gifs again i cry, #my gifs, #ncis, #tiva, #03.06, #the voyeur's web, #it's 12:21am here why am i making gifs at this time, #anyway anything for yall, #also as always it looks so bad on mobile, #so yellow, #and pixelated, #if u can look at this gif on desktop pls do thanks aha
47 notes · See All
steven-cubed-auText

Connie and Steven are together

And so many more! Thank you, Steven Universe, for giving us an amazing farewell to an amazing franchise

#steven universe, #steven universe future, #not art, #that doesnt mean the fandoms dying anytime soon tho lmao, #youll have to pry this show from my cold dead hands, #also, #what was in the box?!? i still wanna know!, #is it a metaphor for something?, #su spoilers, #suf spoilers
41 notes · See All
defnotmeyoyoyoVideo

your sisterhood is showing 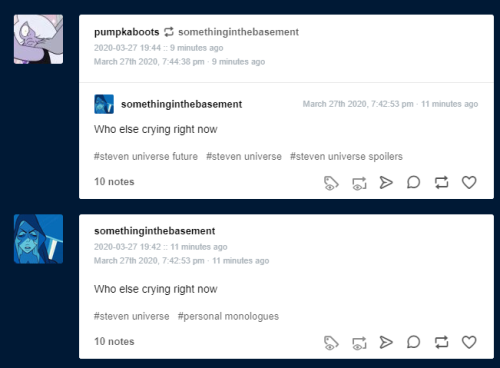 #also, #one is NINE minutes ago and the other is ELEVEN minutes ago, #9/11 illuminati confirmed
1 notes · See All
nothinggold13Photo

Things I Knew Happened But Never Fully Noticed: Susan holding onto Peter’s sword when he went to save Trumpkin. (He ran off holding it, and then we saw him dive into the water, so I assume he threw it to the side, and Susan picked it up. She may have even sheathed it for him.) 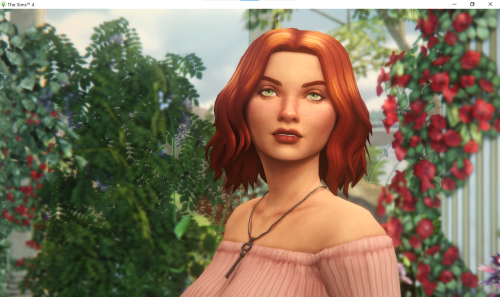