“from afar waving her hand and calling her name.

Amity looks at Luz quietly thinking “What could it be? and starts to approach  her and once there she said

Amity: Sure Luz, where is it? (blushing)

Amity came closer and stand beside Luz and she said

and she said after

Amity: I-I can’t believe I fell for that

I finally finished it!!! It took about 120 hours of work but I got it done.

I started with completely drawing and coloring the background, which came out like this.

After that I used a pose reference and some images of amity and luz (that way I got the outfits and colors right) and drew these two cuties.

Then I moved them over to the background, did the lighting and shading plus I added a few more small bits to make it truly magical!

And ended up with this gorgeous masterpiece!!!!!! I’m either gonna do a kiss scene between these two next or a boschlow scene. Not sure which. Any thoughts??

Plus! It’s lineless. My first one! Yay!!

Basically the Au ✨ it was a crack idea and after a month we have plot, angst, and crack

We have an ongoing joke called That Night that I’m never revealing to anyone. There was a potion incident that swapped the Nocedas personalities. And the latest one where the three pairs went on a human world date and Lucia and Amelia fought in a parking lot which led to catgirls being a mothman equivalent and MatPat becomes canon in this universe and we made a mcdonalds cashier a lesbian and she became an oc named Veronica Janis L. Weed and a shared child between me and Bog and I love her so much.

Things to know about the 13 bastards.

A follow up to the last siblings post. Now. I’m going to tell all of you what you need to know about them before I get into the story and the shenanigans.

Let’s start with the Nocedas.

Lucia is betaluz. She’s the oldest of the three at 20 years old. She has a different father from Luz and Lucille (that’s lore for another time). She’s what you imagine when you think about beta Luz. She’s a great older sister to Luz and Lucille and a disaster like her siblings. She’s an adrenaline junkie and will be violent and hit things until she feels better. Punch you feelings out kinda gal.

Luz is Luz. Same as always she’s our lovable Canon babey. There really isn’t much change to her character. She’s 14 and a middle child. Still the same energetic, no think only do babey who will try and fight a demon but now she has Lucia who is trying to not get her baby sister killed. She’d also a huge meme.

Lucille is pilotluz. She’s the youngest of the bunch at 12 years old. She’s the calmer of the three but that doesn’t make her easier to deal with. She loves fantasy as much as the other two but she’s got a knack for tech and making little machines. She’s REALLY straightforward and has no filter. This child flirted with all the Blights while both her sisters were having a panic.

Beta Twins. Me, Clown, and Bog named the two of them Esmerelda and Edward. And Clown transed their genders. The two of them are the oldest, 22 years old. They’re absent in the main plot of the little world we’ve made but they’re there for shenanigans. Take the Canon twins and intensify their flirting by 10. Lucia has a crush on the both of them and simps for Esme. And as great as the older twins are. They ah,, gave their 5 younger siblings abandonment issues ;)

Amelia is beta amity. Just take all the knowledge you already think you know about beta Amity and that’s Amelia. But this time shes 10 times more of a pyromaniac and in what me and Bog call ✨ the demolition coven ✨ which is just the opposite to the construction coven. Its exactly what you think it is. Its how she copes. I will not elaborate. She’s 20, the same age as Lucia, and they met when Lucia and Salix stole her magic tesla. They’re all feral.

Canon Twins don’t have any changes. Except they have a small crush on Lucia because girl pretty. They’re still flirts and are horrible at it.

Amity now has 6 siblings and it is hell. No major changes to Amity really.

Amber is pilotAmity. She’s the youngest of the family also 12 years old like Lucille. She’s a bit of a ball of Anxiety. Okay. I won’t sugarcoat things for you guys. Me and Bog gave her so much trauma. She needs therapy and Lucille is her ‘emotional support human’ We did it for the angst. And wow. G O D. That was painful. We’ve made a month’s worth of plot for this AU. She’s the baby of the Blight family and if anyone tried to hurt her they’re getting one hell of a beating.

The Parks are also here but not too here. Another person from discord requested so much of them that they’re pretty fleshed out.

Salix is beta Willow. She’s the oldest and same as the other Beta’s 20 years old. She’s feral and will sell your soul for a potato chip. Take what you know about beta Willow and that’s basically it.

Willow like the rest of the canons doesn’t really change much. She now just has 2 siblings and her big sister. She does not see. She doesn’t hate Salix but if her sister was on fire and she had a water bucket. Y E a H. Siblings.

Wionna is pilotwillow. She’s the feral gremlin babey with a rat and we love her. You think she’s babey but she will attack you and shes hyper and will talk your ear off about her rat and plants.

I have 2 older siblings and I’m projecting what I have onto this AU.

It is THREE in the morning but it doesn’t matter cuz I thot of this already.

And there’s stuff that’s we know that ain’t even been in the show yet, like Odalia making Amity dye her hair, and Alador being interesting to write.

My point is, imagine when Luz finds out. It’s gonna happen. She’s gonna find out what’s been going on at Blight Manor. She’s gonna go fucking feral. The plot so far, and with what we know, it’s almost definitely gonna happen.

And the fandom will break either Tumblr or Twitter. Probably both.

#it's legit been a minute since I posted toh stuff#and even now this post is a clusterfuck.#idc cuz it's late and I'm tired and I just needed to get that out there.#the owl house#toh#Luz noceda#amity Blight#lumity#the blight parents#fucking tags#i legit am passing out as i type this lmao
8 notes
mooisapoo
Text

Something I did in 10 seconds, but it makes me happy

Redraw of @sleepyash013 Amity over on insta. Go check em out

*Behold my only contribution to the owl house fandom: an angsty amity poem*

Father please no price to pay

Allow me to stay

No is all they say

To the house of owl and the raven I take flight

Away from my house of blight

and my family that cause me fright

Towards her endearing light

To her I flee from the fray

And in her light all is day

Joyful as the flowers of may

With her I shall stay

Two of favourite cartoons ever, so of course I had to draw it. Now excuse me while I watch the final season of Carmen Sandiego 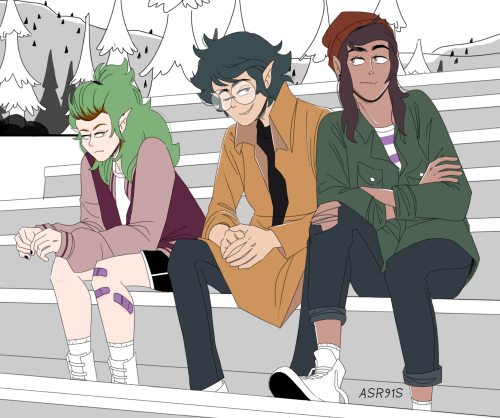 Amity: has anyone told you today that you’re pretty fucking annoying?

Amity: good. I didn’t want to murder anyone today. 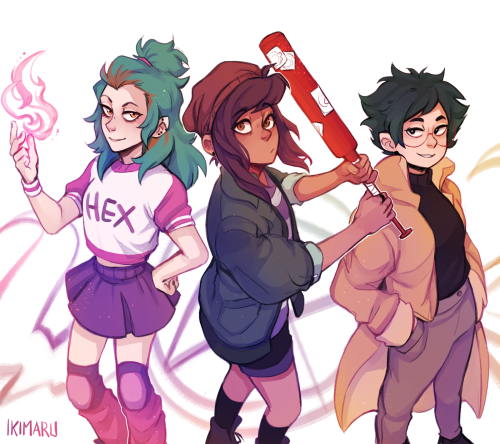