A little b99 theory

“…Dont trip? Have you ever met me before Jake?” Amy asked the man already taking a thermostat out of her purse. “Open your mouth please.” She asked trying to get the thing in his mouth to see if he had a fever.

Amy Santiago x Jake Peralta Icons —“You’re not allowed to fall in love with me.”

She lays her hand against his chest and snuggles close to him, in bed. It’s been almost a week since he returned and they haven’t left the comfort of these sheets and covers (probably, she muses, why they call it a comforter) to do anything other than use the toilet, shower (together, always together) or eat the occasional light meal—she makes him an omelet French style, lightly buttered with no other garnish, and he makes her scrambled eggs since that’s usually all he can handle as a man that has, on at least one occasion she witnessed, burned a pot of boiling water.

*Jake and Amy setting up an IKEA desk*

Amy: okay so I think we were supposed to run the cables through the back here

Jake: ah yes that would have made more sense

Amy: but I think what we did is fine, right?

Amy: you’re so mean to me

they couldn’t’ve been more happier 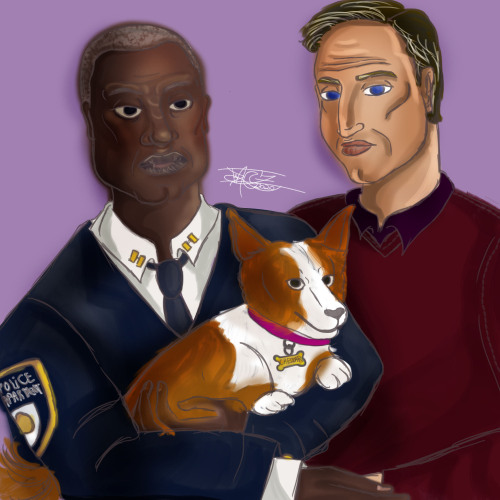 Peraltiago on the phone | Introducing Mac

A/n : Ahhhh my first one shot !!!! Thank you for requesting

Everyone thought that Rosa Diaz was the tough, secretive, scary girl, even her colleagues at the ninety-ninth precinct. However, you knew better. Rosa and you have been in a relationship for the past seven months and in your words Rosa was “like a coconut” hard on the outside but soft on the inside, and that connotation stuck. You loved calling Rosa co-co and darling , among other things, especially when it made Rosa blush deeply.

Rosa is closed-off, anyone one can tell that and that is the reason you hadn’t shared the details of your relationship with anyone. That didn’t stop you from showering Rosa with subtle love during work. You’d leave little notes on her desk, leaving Argo’s apple pie in another container so that Charles doesn’t get to pick on Rosa. She would send you random flowers and subtly kiss you when there’s no one around.

You both thought that no one really saw it, but Amy was picking up the hints and her smirk was impeccable when she was telling others what she figured out. Wanting to out you both, everyone started dropping bombs. Charles came over when you both were working on a case and said how your personalities matched each other and you would look great together, and you both sassed him back instead. Rosa was asked by Jake about the note in her lunch, she had to confess about having a girlfriend. You both thought that this intervention would stop there, but it didn’t, everyone would randomly ask Rosa random things about her relationship with the “mystery girl” and she would reply with a smile. Jake swore he had never seen rosa go “soft”.

You decided to surprise Rosa by returning a day early from your parents’ house after a week of holiday. You were in the lift, unable to wait to kiss Rosa and spend the day with each other at your shared home.What you didn’t know was that the squad were having a game night behind the door you were just unlocking. As you entered the house you shouted “Hey darlin’, I’m home early. Come here and give me a kiss.” When you turn around you see everyone staring and smiling at you, “Oops?” you said feeling guilty that you ruined the secret. Unexpectedly, Rosa just smiled and motioned you to come over “Come here baby, we just started the game. You can be in my team.“ She kissed your head as you spent the rest of the night laughing and earning heart eyes from the rest of the squad.

#brooklyn nine nine, #b99, #rosa diaz, #rosa diaz x reader, #jake peralta, #amy santiago, #charles boyle, #one shot, #asks for m, #marauderswhisperer
62 notes · See All
love-the-sanders-childrenChat
Virgil doesn't accept Gifts
Patton to Logan: I'm about to give Virgil his gift!
Logan: Oh, did he lift his no gift policy?
Patton: Well, no, but he would never open a gift, right? But what if his gift didn't look like a gift?
Patton: I left it in a cardboard box in his room. There's no card, just the words open me now, which I wrote with my left hand so he wouldn't recognise my handwriting.
Logan: So, Just to recap
Logan: You left an unmarked package in Anxiety's room on a random monday with a suspicous message on it that looked like it was written by a crazy person.
Virgil 0.5 seconds later: bOMB, THERE'S A BOMB!-
Thomas and the oter sides: *panics and start screaming*
Logan: Great gift, babe
#Logan sanders, #patton x logan, #morality, #logicality, #logic, #Patton sanders, #thomas sanders, #virgil sanders, #b99, #brooklyn 99, #source: brooklyn nine-nine, #incorrect quotes, #amy santiago, #jake peralta, #captain holt, #he tried
159 notes · See All
new-years-tayText