Hawke and Anders greet their new daughter, and extract an important from Varric.

Varric held Hawke’s hand tightly as she struggled. “Come on, Hawke,” he said soothingly. “You can do this. You get hurt all the time,” he adds, “this is nothing.”

Covered in sweat, her hair plastered to her face, she grimaced, her grip on him tightening. “Liar,” she hissed, trying to laugh as her head fell back against the pillow. “This is worse than- Anders!”

on another episode of: scenes that made chelsea cry 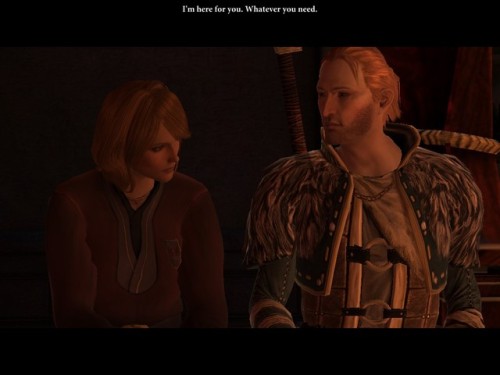 hawke: hey can you hold this?
anders: what?
*gives hand* 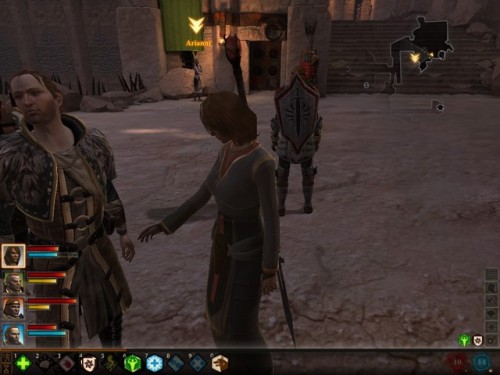 Do a short about Hawke in a friend Anders romance getting an endgame kiss, or do a short about deciding anders’ fate much more emotionally charged considering she has feelings for Sebastian too and with some fenris involvement…
I can’t decide…

Summary: Hawke deals with feelings for Anders and a very confusing attraction to Isabela.

Since befriending Varric, Ilora had been spending more and more of her free evenings at the Hanged Man with her new companions.

She’d felt guilty, at first. She ought to be spending time with her mother, or taking care of any number of errands to prepare for the expedition. At the very least she needed to set a positive example for Bethany. But between Varric’s pestering and her sister’s prodding, she soon gave in. And once there, she almost always enjoyed herself. Among her new friends she was not Ilora at all, but Hawke, someone new and perhaps more adventurous.

But with the newfound belonging came new confusions as well. Especially on this particular night, when she found herself seated between Anders and Isabela.

Summary:
Anders wants more than anything to save Marian

Stories about Champion of Kirkwall Ilora Hawke (who usually just goes by “Hawke”).

Will be updated as I add more.

Read the series on AO3

Hawke and Aveline talk on the ship to Kirkwall.

Hawke deals with feelings for Anders and an attraction to Isabela.

Ilora and Bethany sat at the edge of the bed they shared in Gamlen’s house. In the near dark, lit only by a single candle, Ilora brushed her sister’s hair. She’d been doing this for her ever since they were small, and even now that they were both grown the ritual remained. It was a good chance for them to talk and rehash the events of the day. They took care to speak in whispers so as not to wake Mother and Gamlen in the next room. 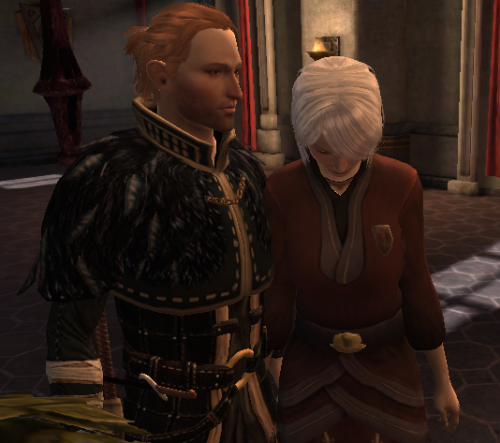 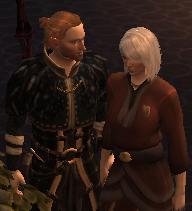 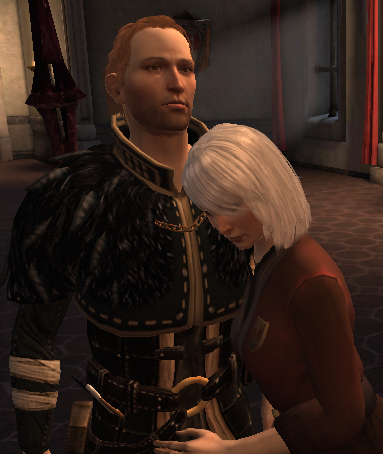 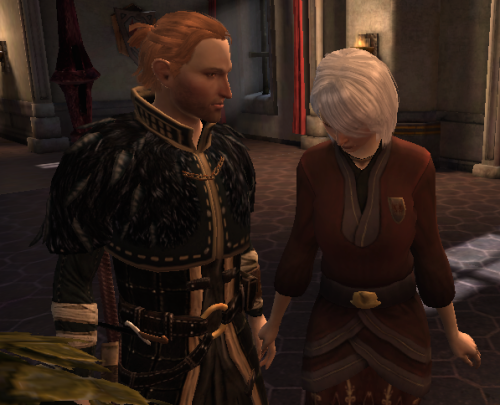 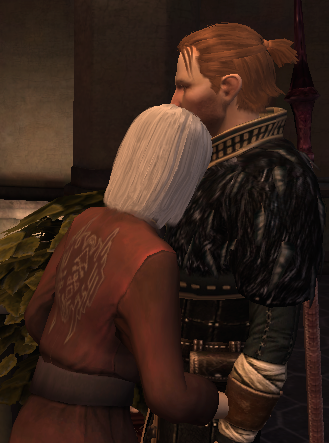 Chellmie Hawke’s fingers crackle with fire as she holds her hands up, shaking. She’s been sitting on her bed for the past hour, crying and staring into nothing.

Anders walks in and immediately sits down beside her, noticing the state she’s in.

She doesn’t respond at first, but he’s patient, gently rubbing her back.

“I wish there was a way for me to… just not have magic. Just for a while. Until Meredith’s gone.”

“Chell, don’t say that! Your magic is a gift, and you use it beautifully!”

“I…” she turns around to hug him as they fall onto the bed. “I hate that bitch! She knows I’m terrified of her, and she’s taking advantage of that!”

“I know,” he wipes a tear from her cheek before placing several kisses on her face, ending with her mouth. “She’s hurt so many mages… but she’ll pay soon enough.”

with her wooden sword and shield made by her uncle Ogren

Tapping into his powers showing his daddy his like him.

skipping archery practice and rUNNING AROUND IN HER NICE CLOTHES HER AUNT JOSIE BOUGHT HER!!! 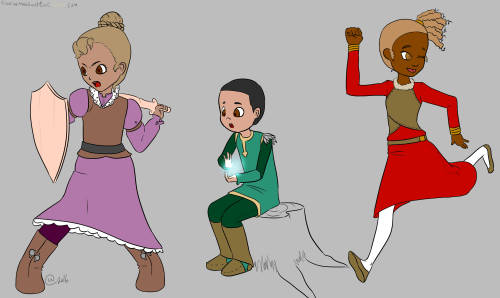 For Tuesday’s Anders shipping theme, a very unrefined sketch and a quote from an anders x femhawke chapter of my fan fic, with a double side of angst.

Very mildly nsfw line from the quote, so keeping it under the fold.

Hmm I’ll go with Dawn Hawke for this one since I haven’t written as much for her!! Thanks friend!!

It had been that long - 46 days exactly, so more than six weeks, but who was counting, right? - since he’d heard her voice, her laughter, anything really more than a weary groan or a murmur in her sleep. She’d followed along silently behind him, not even talking to herself as she was usually so prone to doing.

Dawn had never been this angry before, Anders was sure of it.

Tallis and Astrid had been flirting all afternoon. At first, it was harmless—his Hawke flirted as easily as she breathed, and no one was safe from her wandering eye, especially not pretty red-haired elves whose skills with her blades could have matched her own. Besides, she’d made it clear that she wanted him. And only him, if that was what he wanted. She’d kept her promise, she’d stayed faithful. She hadn’t even set foot in the Blooming Rose in over a year, even though she claimed to like their whiskey selection better than the swill they served at the Hanged Man.

But as the day went on, his attitude toward the whole thing slipped from patient amusement to aggravation. Especially as Tallis asked whether or not Astrid was married.

“Yes, Hawke,“ he’d retorted. "Who is behind your throne?”

Hawke had laughed nervously, offering him a crooked smile and a little shrug. “Let’s just keep moving, shall we?”

He continued seething to himself as they hunted around the mountain for wyvern bait, for antidote components, for lost dogs, imagining turning the interloper into an elf-cicle or setting her pretty red hair on fire.

They reached the top of the mountain, or close enough, and it was time to call the wyvern. And Tallis threw the blood they’d collected over herself. He was not expecting that, and he couldn’t help but glance over at Hawke’s raised eyebrow and dropped jaw. Pleased, he turned and watched Tallis jumped around, covered in half-congealed blood, screaming a nug call at the top of her lungs. Andraste’s tits, he hoped that was the nug call.

Astrid came to stand beside him as the elf leaped in the air yet again, eyes wide. “Well, you don’t have to worry anymore, Anders,” she murmured under her breath. “I no longer want to sleep with her.”

"Wonderful,“ he shot back, voice low. "Now if I could just get half of Kirkwall to dance around covered in blood and whooping like a lunatic, I’d never have to worry about the sanctity of our marriage bed again.”

She snorted her laughter, then leaned a little closer to bump his shoulder with her own. “Marriage bed, eh? You thinking of finally making an honest woman out of me?”

Thank the Maker the wyvern descended upon them right then. It saved him from having to think of a reply.

Hawke consciously ignored her brother’s groaning while she and Isabela dug through the chests that ringed the Tal-Vashoth camp. They were still struggling for funds to convince Bartrand to bring them on the Deep Roads expedition, and every bit of saleable treasure brought them one step closer. When Isabela finally pronounced that they had found everything of value, Ismene stuffed the few rings and potions that she had collected into a pouch on her belt and turned to see what Carver was whining about.

In the middle of the path, amidst the pooled blood and dropped bodies of half a dozen enormous qunari, a mischievously grinning Anders was prodding her little brother with the end of his staff. “Stop poking me!” Carver was shrieking, batting it away. “You’re supposed to be healing me!”

“He could poke you with something else,” Isabela suggested. It earned her death glares from all three of the others, and that seemed to please her.

I’m sorry this took forever! I hope you like it! :D

Gwen called softly as she eased open the door to the master bedroom. It was late, far past everyone else’s bedtime. She had been gone for the better part of the last two weeks, working on helping friend after friend with the most random things. She loved that her friends needed her. Gwen truly did. She did not, however, love sleeping wherever she could find a spot. Her back had never hurt so bad in her life.

Gwen blinked as she took in the state of the room she shared with Anders. The fireplace was lit, the room warm and cozy, which only made her realized how cold she was. She tried to repress a shiver and failed, her armor jingling and making her cringe.

“Welcome home my love,” Anders said softly. He had a gentle smile on his face as he stood beside the small writing desk in the corner of the room. Gwen noticed a small tray filled with food next to their bed and a small stack of folded cloth. She gave Anders a strange look, though not an unappreciative one. He laughed at the look on her face. “Varric told me you had been sleeping in a tent for most of the last two weeks, so I thought I would do something nice of you. Come, get out of your armor and eat. I have fresh clothes for you.”

Gwen couldn’t help the smile that overtook her face. She shed her armor in a hurry, not caring about it enough to put it away properly. She changed into the fresh clothes that Anders had left out for her. They were soft and light against her skin. She sighed contently, grabbing a chunk of bread and meat. Gwen devoured it in no more than two bites. She hadn’t realized how hungry she was either. Gwen grabbed more bread and looked back to see Anders putting the way the last of her mess.

“Lie down on your stomach and get comfortable,” Anders instructed. “I’m going to treat any injuries you may have first.”

“Why do I have to lay on my stomach for that?” Gwen asked between bites of bread. “You could heal me while I eat really.”

“Just do it Gwen,” Anders replied lightly, cracking his knuckles and shaking out his hands.

Gwen make a sound of annoyance as she finished her food and snuggled into bed. She let out heavy sigh of contentment. Their bed had never felt so comfortable than it did right then. She let her eyes close and she felt the bed shift under what she assumed was Anders weight. The familiar presence of his magic, the tingle of the Fade upon her skin as he sought out and took care of the minor wounds Gwen had. Anders chastised her for not making sure a broken rib had been set correctly, but there was no real heat behind his words.

Anders moved again, shifting the bed slightly to Gwen’s annoyance. She left out a soft sound, trying to tell Anders to stop moving, when she felt his hands on her upper back. She tried to look up at him when he dug his fingers into shoulders, working out the knots that had built up there over the last… Maker knows how long. She had never had a massage of any kind. Gwen let out a soft sigh as Anders loosened the knots between her shoulder blades. She could feel his magic again, his hands warm and soothing. Her eyes felt heavy as Anders continued his work.

“I love you Anders,” Gwen mumbled into her pillow as sleep began to claimed her.

“I love you too,” Anders replied softly. His finger dug deeper into her shoulders, moving up the back of her neck. “Now sleep, my love.”