Rabastan: i almost got surprise adopted this morning.

Regulus: *nonchalant* he almost got kidnapped.

Rodolphus: look buddy, you’ve got to expect the unexpecte.

Rabastan: did you expect that?

Beneath the Willow Tree

At the start of her fifth year, Andromeda knew what her destiny would be. She would marry her childhood sweetheart. She would live at her sisters’ side. She would be the faithful daughter she longed to be. But soon she finds herself entangled in events she cannot share with anyone, with secrets that frighten her as much as they tempt her. All the while she meets a strange Hufflepuff boy at every turn; one who perhaps sees her too clearly for his own good.

This is, at some level, a love story. But before Andromeda’s name was burned from the tapestry of her family tree, before she took Ted’s name and Ted’s ring, she was Andromeda Black; a girl caught between worlds. This is the story of how that came to be.

read on a03 @Linquist

Andromeda: are you drunk?

Narcissa: Technically, no. I was drunk a couple hours ago. Now, I’m just hungover.

YES I LOVE THIS

Andromeda: “I don’t know how to fall off a chair and make it look real. And what if the AH-”

Bellatrix: *kicked Andromeda off her chair and shrugs* “Looked good to me!”

Sirius: You need to stay away from Rabastan. He’s mean, I don’t want you near him

Andromeda: Hmmm okay. Or maybe I should just stay away from all men..

Sirius: [after catching Andromeda and Ted in a broom closet] We need to have the talk

Andromeda: I’m older than you! I know how it works

Sirius: NO YOU DON’T.

Andromeda: Sirius I appreciate you wanting to watch over me and protect me but you need to tone it down

Sirius: I thought you were in danger!

Andromeda: I WAS WALKING TO THE BATHROOM

As some can notice I just love The Black Family and the Marauders era when they were all young.

So I was thinking about write a story where I would show the other side of Sirius Black and I would post it here, on Tumblr.

The story would tell about how Sirius is a person with Marauders and how he is kinda different with his brother and the Black Sisters. The principal point is to show his complexity and how he deal with his family issues, how he survived to ‘em and why he and the others stopped talking.

The story will take place in sixth year where Regulus was starting suffer pressure to become a Death Eater, Sirius and the Marauders were becoming animagus and going on full moons with Remus, Snape and Lily would fight and Alice and Frank would start recruiting for the Order of Phoenix.

The focus is on Bellatrix, Andromeda, Narcissa, Sirius and Regulus, but it’ll also have other characters and ships.

Tell me if y'all would like to see it and give suggestions and ideas of ships, because I did not finished to plan, so I can add stuff, and your opinion is very important.

If it have more than 15 people interested I will write it.

Andromeda: But trust me,

Andromeda: the Dark Lord will never see you as anything other than the T.G.I. Friday’s hostess on Proactiv

Andromeda: who lets you bend you over his desk while you close your eyes to avoid coming face-to-face with that framed photo of his family’s trip to Aspen

POV: Bellatrix, Narcissa, Andromeda, Regulus, and Sirius go on a trip on Andromeda’s birthday which turns out horrible

Everyone but Bellatrix: *struggles with their words*

Andromeda: “I feel like everyone is staring at my pimple.”

Sirius: [listening from the other room] I’m going out there

Sirius: No one talks to her like that [walking out the door]

Sirius: [listening from the other room] I’m going in there

The people have spoken.

#i have a feeling the algorithm will try really hard to hide this one...#while it was in my drafts it blurred the images out and gave a warning#oopsie#so if i disappear anytime soon#it will be because i flew too close to the sun#going to post this before i go crazy noticing all the flaws#these are supposed to be casual dammit#anyway have some snape getting pegged until he cries#praline’s spicy art requests#severus snape#andromeda black#andromeda tonks#severus x andromeda#nsft#art
108 notes
riyancam
Text

POV: Bellatrix, Andromeda, and Narcissa’s house is being fumigated for bugs so they have to share a room with Sirius and Regulus at Grimmauld. Narcissa and Andromeda decide to tell them a bedtime story.

Bellatrix: “Turn it off!” (talking about the lights)

Bellatrix: *sits up* “Turn off the lights!”

Sirius: “Why are you guys here again?”

Andromeda: “Our house is being fumigated for bugs so, we’re spending the night here with you!”

Bellatrix: “Yeah, I wish someone would fumigate you.”

Andromeda: “OK, when I was little-”

Narcissa: “So, we’re gonna improvise our very own bedtime story for you two.”

Bellatrix: “I thought this place had guest rooms.”

Narcissa: “They do, but mother and father said we can’t sleep in those.”

Bellatrix: “Go sleep in the basement with the house elves then.”

Bellatrix: “I meant that.”

Andromeda: “OK kids, we will now tell you a bedtime story, and we’re just gonna make it up as we go along! Bella, you start.”

Andromeda: “Um, once upon a time, there was a little girl who always dreamed of being a princess. And now Bella will tell you the little girl’s name.”

Bellatrix: “Her name was Blotus.”

Bellatrix: “Her name was Blotus!”

Andromeda: “The- the little girl’s name was Blotus, so um, Blotus wanted to be a princess!”

Bellatrix: “But then she got bit by a Basilisk.”

Narcissa: “Okay. So- so Blotus who dreamed of being a princess-”

Bellatrix: “Who got bit by a Basilisk.”

Narcissa: “Who was bit by a Basilisk, but, she also had a magic bunny, that, fixed all of her injuries!”

Bellatrix: “And then a Hippogriff stepped on the bunny.”

Andromeda: “But the bunny was okay.”

Bellatrix: “No-ho-ho! No, the bunny was far from okay!”

Andromeda: “Uh, give us a second…”

*After a few minutes*

Andromeda: “So we talked it over with Bella, and we all decided that Blotus’s magic bunny was totally okay!”

Bellatrix: “Yeah, I mean I don’t see how any bunny could recover from a severe spinal injury, but, they said the bunny was okay, so, fine! Happy, happy bunny.”

Andromeda: “Right, now, Blotus knew that to become a princess she had to find a handsome prince!”

Bellatrix: “Yeah, so Blotus tried to meet one through a Seer, but when the guy showed up he was 37. He was on parole for vandalizing a train station men’s room.”

Narcissa: “But then, on Blotus’s birthday she woke up-”

Narcissa: “And saw- she saw a beautiful rainbow outside her window!”

Bellatrix: “Ow! Look at that. I pulled my fingernail off last week and I think it’s infected, does it look infected?”

Narcissa: “And Blotus lived happily ever after!”

Bellatrix: “Yup, look at that, there’s puss coming out.”

Bellatrix: “I just woke up, and found this sitting on my chest.” *holds up dead lizard*

Is that ANDROMEDA BLACK? The SEVENTH year SLYTHERIN is allied with NEUTRAL, SHE is currently OPEN. Potential faceclaims include (zoey deutch, laura berlin, poppy drayton, UTP.)

IT’S 1977, War and chaos looms outside those doors, but even a curse on magic couldn’t stop hogwarts from opening for another school year. 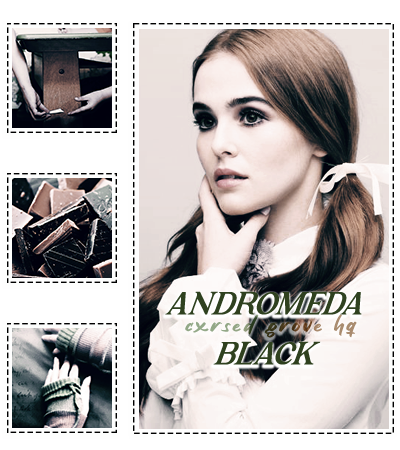 POV: Flitwick gave an extra credit assignment for his students where they have to write a song from scratch and perform it for the first years. Whoever has the best song wins.

Bellatrix: “The Dark Lord doesn’t have nose, so that song is a filthy lie.”

Rodolphus: “Why did we say we’d do this?”

Bellatrix: “Ha, ha. Yeah, it’s so fun to put on humiliating costumes and dance around like idiots for sticky little ten year old’s!”

Andromeda: “Eleven year olds, and I grew those flowers in Herbology!”

Everyone in the room: *confused staring*

Evan: “Broken glass can cut your hand, and then you’ll bleed across the land-”

Andromeda: “We’re not doing that!”

Narcissa: “Well we have to write a song about something.”

Lucius: *gets a letter*

Andromeda: “Wait, I think I remember I heard that the top seven most popular kiddie songs are all about food.”

Narcissa: “So let’s write a kiddie song about food!”

Evan: “Oh, broken glass is not a food, so don’t just listen to some dude who says put cheese on broken glass and make a sand-a-wich… of broken glaaaaaaaas!”

Andromeda: “What is wrong with you?”

Lucius: “Remember last week how I asked the Dark Lord for a mission?”

Lucius: “This is him! He’s given me my first mission!”

Lucius: “He wants me to meet him soon-”

Evan from behind them: “How about a song about broken glass? I’ll help you write it after class. There is no song that can surpass this song we siiiiiiing… about broken glaaaaaaaaas! Harmonica solo!”