Making Artemis’ parents the villain of this story and probably every one after that? Couldn’t be me I would never

Child: ‘I’m experiencing Symptoms so I think I have Disorder’

Parent (who experiences those same exact Symptoms and that exact Disorder): ‘no you don’t those are normal things that everyone does’

yeah idk how because my brain is tired but I feel like this could apply to Artemis and Angeline… i might be completely wrong but I’m just. Thinking. (ok I ended up writing a lot more than I thought I was going to)

- Thinking about mental health being an obviously uncomfortable topic in the Fowl family (Angeline sent Artemis to a psychiatrist but I get the vibes that she thought that would make his mental health someone else’s responsibility),

- and how if a parent isn’t willing to talk about their own experience with mental illness their kid is probably gonna feel like they’re all alone in their struggle and like something’s wrong with them for having that struggle in the first place,

- and how Artemis was probably genetically predisposed to experiencing mental illness like the atlantis complex, and even if he isn’t,

- if Angeline had taken some time to talk to him about her mental health problems and expressed regret that she hadn’t sought more robust psychiatric treatment, he might have been more open to seeking treatment for himself before his symptoms got worse

Yeah idk I might be completely wrong but I just. Have a lot of thoughts about Angeline Fowl. And wow this really was just a stream of consciousness, and didn’t actually connect to the first bit, but uh. Feel free to add on if you want lol

#artemis fowl#angeline fowl#essays#kind of?#the atlantis complex#book 1#idk it’s hard to judge how much treatment she got in book 1#it mentions physicians who prescribed ‘rest and sleeping pills’#and ok so she wasn’t suicidal and being bedridden didn’t affect her income so maybe her state wasn’t as alarming as it could have been#but I have to imagine that such a wealthy woman could have access to better treatment than That
34 notes
grass-and-citrus
Text

Following @lize-fowl-and-artemis-kaneki ’s request, I drew Angeline Fowl! Her hair color is interesting, I imagined her with dark brown hair for a long time, likely due to her depiction in the graphic novels, since many of the books don’t mention it! However, in the second Fowl Twins book (Deny All Charges), she’s said to have blond hair, which I guess makes sense considering Beckett is blond! 👩🏼🧒🏼 Although, of course, recessive genes exist, so who knows if that’s her natural hair color!

Butler: My fondness for romantic novels is woefully well-known by this point.

Minerva: An interesting question… I suppose the one thing I don’t tell people I enjoy is puns. I have to hold myself back whenever someone tells a good pun, they’re so unprofessional.

Angeline: I adore Nando’s. It’s so– pedestrian of me, but I do.

Artemis Sr.: The twins introduced me to video games, and I’m hopelessly addicted. I like the strategy games, but the twins and I play Minecraft together.

“Fuck you my child is fine” ma’am your child is seeing numbers all over the place.

The Fowl Family, made with Gacha Club this time.

I’ve changed Beckett and Angeline’s hair, had a beard to Artemis Sr and glasses to Arty.

I love Artemis and Angeline fowl dynamics. It’s like

Angeline :“ here Artemis have some

And Artemis just going :“ No, mother ”

And just drops it

(Yeah Angeline is one of my favourite characters !(^з^)-☆)

Three others Artemis Fowl memes. (You can’t stop me lol.)

I don’t think enough people talk about how Angeline’s family is Russian?? Like,, the potential of Artemis being like, half-Russian?? Slavic Artemis??

And now ! My favourite family… ✨The Fowl Family✨ in gacha life.

I really want to know what did Angeline do when she came to Haven to visit Artemis in TAC. Did she interact with Holly? I hope it happened so that Holly could speek to her about how bad she was at handling her son…Angeline was with him for months but didn’t notice how sick he was, whereas Holly and Foaly met him for about 30 minutes and they already know what’s wrong with him! What about Butler? What did he do while his principal was in therapy? Maybe No.1 kept him company. Who knows…

(Be aware that this will have minor spoilers for the Fowl Twins series, with major spoilers being hidden under a cut.)

This isn’t an uncommon opinion, it seems, and a lot of people within the Fowldom agree that Fowl Senior and Angeline are both poor parents, ranging from woefully incompetent to actually neglectful. While part of their absence from Artemis’s life was out of their control (Fowl Senior’s kidnapping and Angeline’s illness), they nevertheless continued to remain mostly absent from his life throughout the series, only occasionally dropping in to give ‘wise” advice, pressure Artemis into changing his behavior, or be rescued from some evil force. The series ends without much closure in terms of their relationship with him: he leaves for Mars in the gap between TLG and TFT, with the only thing being resolved between them being the parents’ knowledge of the fairies.

During the first Fowl Twins book, this doesn’t change much- they are primarily absent for most of the book, having left their children in the Villa under the watch of a security AI by the name of NANNI. Their involvement is mostly limited to both Myles and Beckett reflecting on advice the two have given them, and that is that.

However, this changes in The Fowl Twins: Deny All Charges- after the family jet (stolen by Myles and Beckett) is destroyed by a missile, both Fowl Senior and Angeline decide that something has to change, with Fowl Senior deciding to implement some rules into the family’s life in an attempt to minimize Myles and Beckett’s brushes with death. At last! An actual attempt at parenting their children! And what does the brief discussion between Fowl Senior and his children reveal?

They are still horribly incompetent parents with no idea what they are doing, and no idea what they’ve done wrong. Fowl Senior in particular does not know how to talk to his children appropriately, or how to discipline them, and as such the discussion quickly goes south.

(Beyond this point, there will be major spoilers for The Fowl Twins: Deny All Charges, chapter 4, including quotes/passages from the text itself.) 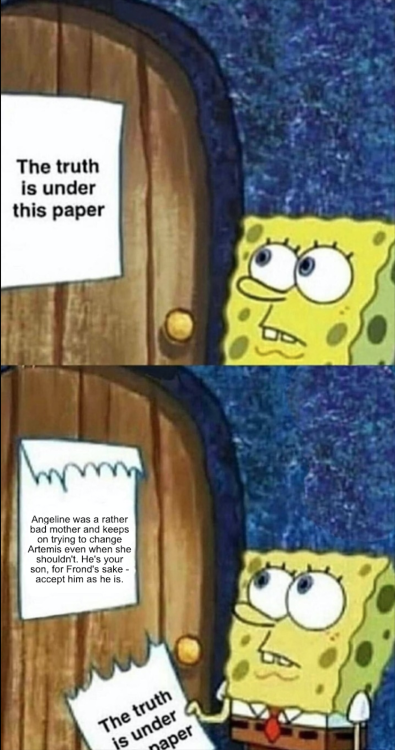 Hgnfhhwjvd this is so soft.

Anyway with this we’re done with book 1! I’m sure I remember more of this than any other book so look forward to when I start the next book. Which is probably going to be tomorrow tbh.

idk when i started thinking ab artemis senior and angeline but i mean they 100% have bond vibes like………. ‘i remember when i first saw your mother, i was in london, at a private party in the ivy. a room full of scoundrels and i was the biggest of the bunch’……. like young artemis senior just stepping into the family crime empire, meeting angeline, a society woman, and falling in love with her… the GOSSIP they provided in certain circles!!!!!!! the Absolute Vibes that that has…….

whatever ur thoughts on them, we can’t deny artemis sr and angeline were objectively Hot As Fuck

[ID: digital drawings of artemis fowl senior and angeline fowl from the chest up. artemis fowl sr has black hair and dark blue eyes, he has a straight nose and his frowning. he is wearing a white shirt unbuttoned at the top. angeline fowl has long pale blonde hair in waves, she has dark brown eyes and red lipstick. she is wearing a blue figure-hugging garment END ID] 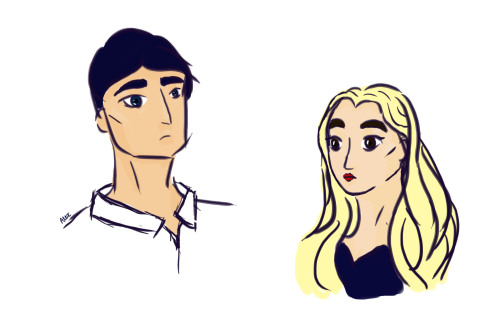