Good Morning! Im trying not to be #AngryBlackWoman all day but its difficult right now!! #IRunWithMaud #ConnectingtheDotsacrosstheDiaspora (at Charleston, South Carolina)
https://www.instagram.com/p/B_4zbH1hM15/?igshid=19isik7kch4al

People who live off access of good energy to people without contributing anything good to the relationship. I was once surrounded by energy vampires. They loved my company, but I hated theirs. They loved everything about me and if they felt sour, I was the first person they called. However, if I ever needed anything, they were nowhere to be found. These types of relationships are toxic to you. Get rid of these energy vampires if they don’t change. If they aren’t willing to alter their behavior and show you different, they honestly won’t care if you drop them. They’ll just go find another host to live off of. Some energy vampires don’t know that’s what they are and they want to change. Help them by outlining expectations of the relationship so they can be better. Never put up with energy vampires and don’t let a bunch of them have access to you. You’ll feel healthier, better, and more satisfied that way. Also notice when you’re being an energy vampire. Do you only go to the same person when you’re sad, but you never hear from them or talk to them otherwise. That’s not really healthy or good. That shouldn’t be anyone’s true purpose to ONLY handle a sad person. 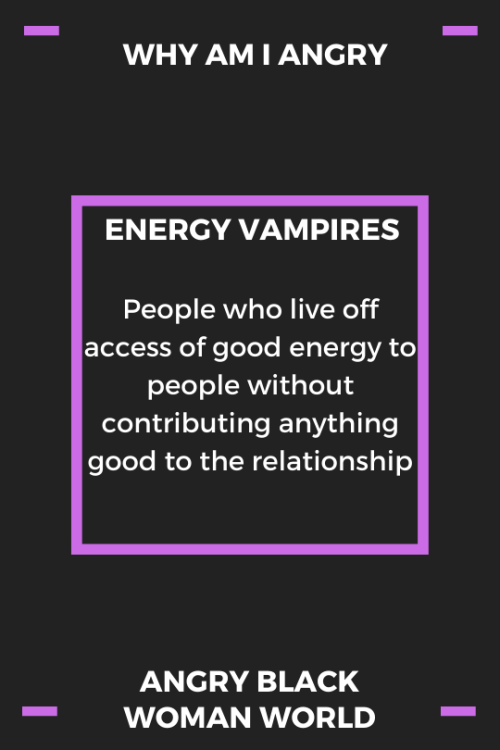 I love an optimist. I don’t love a toxic positive person. Not every day is going to be great. Not everything is amazing. Negative emotions have their place.

When I was interning with a company last summer, I was confronted with a toxic positive person. If I EVER complained about anything or felt any negative emotion, she was quick to dismiss it before attempting to comfort me. It was tiring. I felt bad for ever feeling bad. She was so quick to say that I needed to be more positive. It pissed me off because she’d only just met me and she didn’t know me or what I’d been through, so forcing her positive energy on me made me dislike her. To this day, I don’t like people like her.

Feeling angry, sad, upset, or discontent is OKAY. It’s NORMAL. Anyone trying to take that from you is wrong. It’s part of an important emotional cycle. It’s hard to be joyful all the time. How can you appreciate joy without feeling sadness? How can you know you’re even feeling joy without sadness? These things exist in balance. I’m not giving a pass to negative nancys and toxic positive people. Sometimes you do need to look on the bright side, but sometimes you can’t get to the bright side without acknowledging the bad thing that upset you.

Be an optimist. Don’t be toxic positive. 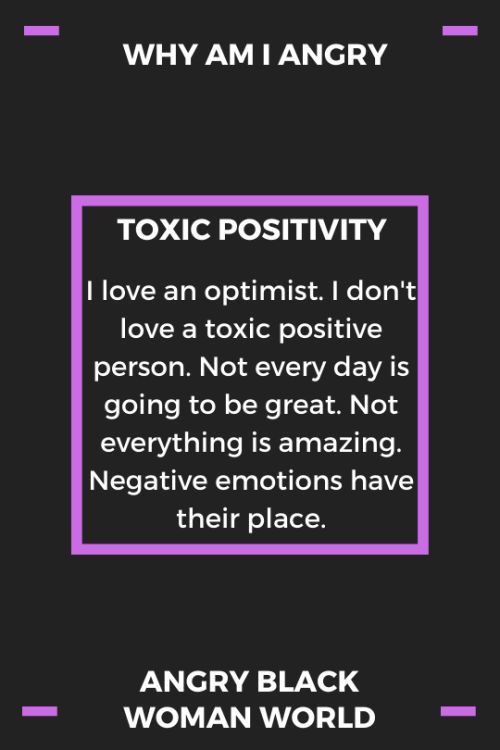 Check out the entire poem.

Please watch! For all you “Oh, don’t use the race card mofos”.

At a moment in time she could pinpoint him calling her “an angry black woman” in which she took as being called a bitch. A couple words which took on so much power. Power so easily stripped from underneath a “black woman”. Proven to be successful in any route she took despite the battle she’d fought. She was offended by the box she was placed in. Am I not human; she thought? A human being who’s allowed to obtain feelings and portray it in any manner she chose to! Disappointed by the mouth it spewed from. Confused about the negative connotation it brought forth. An angry black woman? “Sassy, ill-mannered, and tempered by nature” where? Or a simply Woman of Color who knew exactly what she wanted and how she felt BUT refused to be told otherwise. HER!

There are four main stereotypes of black women that are constantly being perpetuated in media. These insulting and even damaging stereotypical roles Black Women are forced to play are the maid or housekeeper, black friend, hypersexualized woman or Jezebel, and the angry black woman. Most of these character tropes are one dimensional and only showcase a surface layer attribute that is exaggerated. There are examples of actresses taking advantage of the conventions that go along with a certain stereotype and adding layers through their acting talent and their research into the subtext of the character. Addressing there stereotypes is in no way bashing the actresses that have taken these roles because in my next post I will be discussing how many of these women have paved the way for women of color in cinema. For this post I’m going to be focusing on the black friend and angry black woman stereotype.

I want to start of with what could be consider the token black friend. In film there are often characters that are Black friend of the main character. Like the maid or housekeeper trope, the black best friend is mostly there to nurture and guide white characters. They often don’t come off as real or organic in movies because it seems like Hollywood often puts them there to appear inclusive. Having them there is a nod to the black community as a way to say they thought about us and we should be grateful. The black friend is a mandatory addition to a group of friends so they seem diverse. I’m not saying this particular trope is bad and revolting but I think it’s important to raise the question when do black women get to be more than the side character sometimes. Is it too much to ask that sometimes a Black Woman can be the lead of a movie from time to time and not always have to stand in the background and give advice like they are a therapist or life coach.In my opinion it is positive to see more black characters and it nice to see them portrayed in a more positive light but this goes into the concept of tokenism.

Next would be the notorious stereotype of the angry Black Woman. I’m personally really tired of Black women being portrayed in these movies as bitter and angry. They often are being mean to men in general and have unrealistic expectations for what a man should be. This is a really common and overused trope that casts black women in a really negative light. She is an unhappy person, and channels her frustrations on by criticizing others especially African American men. In a way it’s like Black women are being punished by the film industry for not fitting the traditional role of a woman. This harsh portrayal of African American women comes from the unfair gender expectation that says that women are weak, passive, and non-threatening so Black women who are famous for speaking their minds and stating their opinion are demonized. An example of this would be from the film Deliver Us From Eva in which Gabrielle Union plays an angry black woman who is seriously mean. She is very over protective and overbearing towards her sisters and their love lives to the point that the boyfriends feel like this is the only way she will stay out of their business. There is a famous scene from the film where she chews out the owner of a restaurant because she is a health inspector and doesn’t find the place to be up to par.

This characterization is very problematic because media whether we want to admit it or not highly affects the public’s view. Constantly having black female characters like this reinforces the notion that all black women are like that. A real-life example would be when my Filipino friends who when they first came to America were cautious of Black people in general because of all the stuff they had “learned” about Black people from music videos, television, and film. This shows how people start to blur the lines between what is a fictional portrayal in film and take it as fact. People who don’t get the chance to interact with African Americans and Black women take these images and see them as true because not everyone can take the time to research outside of these mediums. 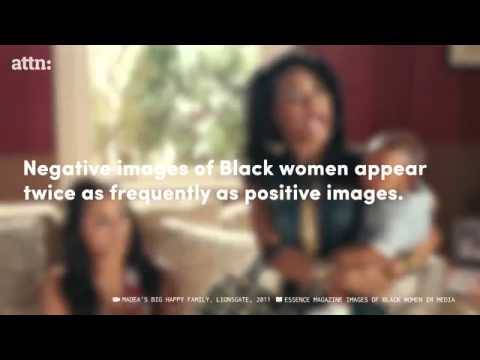 Omarosa is a true bitch #angryblackwoman for real. Rude and ignorant. No wonder chump hired her. #birdsofafeather #HowYouLivin

The First Lady responds to criticism that she is an “angry black woman.” Cenk Uygur and Ana Kasparian, hosts of The Young Turks, break it down.

“(CNN) While Michelle Obama was a harsh critic of Donald Trump on the campaign trail, the first lady says in an interview that she is supportive of the country’s incoming new leader.

“The words that we say moving forward – all of us, it matters, which is one of the reasons Barack and I are so supportive of this transition, because no matter how we felt going into it, it is important for the health of this nation that we support the commander-in-chief,” she told Oprah Winfrey in an interview that aired Monday on CBS. “Wasn’t done when my husband took office but we’re going high and this is what’s best for the country.”

“So we are going to be there for the next president and do whatever we have to do to make sure that he is successful because if he succeeds we all succeed,” she added.”

I dislike Iyanla as much as any Black millennial but this #AngryBlackWoman #Myth #AngryBlackWomanMyth #HealingHouse It was necessary. This is how I spent my day with my mom. I was just tryna be messy (as reality TV is) and probably create memes, and now I’m emotionally damn drained. Finally vocalizing pain and empathy I’ve not been allowed by predominantly White American society, Black men, other Black women, AND Myself; to vocalize. I’m not mean damn it, I’m goddamn fucking tired. I’m not allowed to bring you this hurt… But I’m not allowed to express it either? So since you got all the fucking answers Sway TELL MY MEAN ASS HOOOOOW EXACTLY AM I SUPPOSED TO LET YOU KNOW YOU’RE HURTING ME WITHOUT BEING “angry,” “mean,” “trying you,” “bitching.” Let me know…. Let me know how I should DRESS UP MY PAIN THAT YOUR ARE CAUSING so that I’m not that “angry Black woman;” “nagging you,” “with my chest out,” etc. #Tired

So my tweets about the stereotype of #AngryBlackWoman and #AngryBlackMan are in correlation to this show on @owntv . It’s a must see and really hits home on some of the battles within the #blackcommunity. It will have you in a tears. #nmaahc #blacklove #blacklivesmatter

NEW ON SOUTHERNLACED.COM: “Reality TV is definitely alive and well in 2016. I remember being a kid growing up watching MTV’s Real World and believing every fight and every wild altercation that came across my screen tv screen. Over the years, new reality tv shows like Basketball Wives and Love and Hip-Hop have broadcasted the American Black woman as over dramatized, loud, aggressive and scripted. So shows like, Iyanla, Fix My Life, (airs Saturday nights on the Oprah Winfrey Network) give me hope that I’ll be able to see black women on television uplifting and encouraging each other. Not throwing wine bottles across tables or fighting in a recording studio.” - Kimberly Davis, @pearlfection104

#TBT to the day we shot the #angryblackwoman #lookbook The link is in my bio… Make sure you watch it! #plusisperfection #ThatsNotMyNameTv