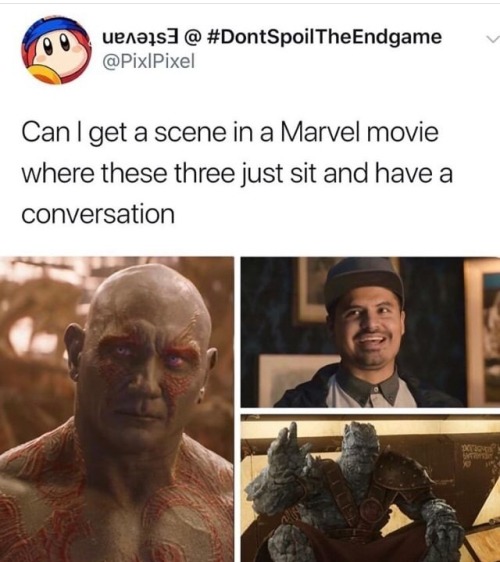 Maggie, I tell you this as a friend, and as the first love of my life. 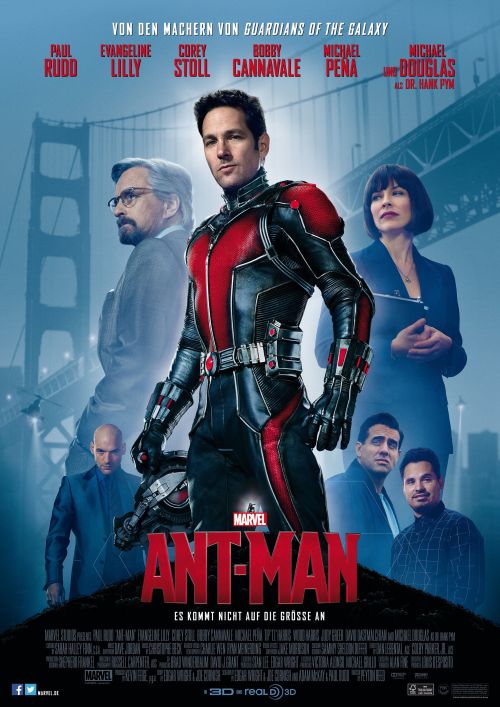 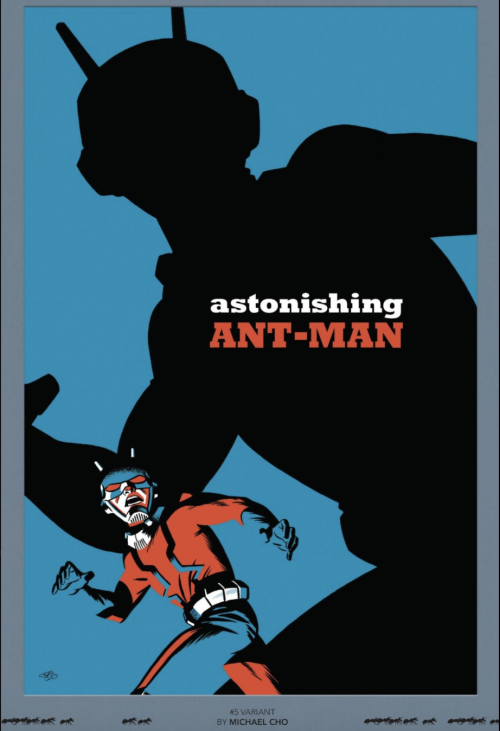 He’s been really growing into the gig. Get it? Ugh. Sorry. 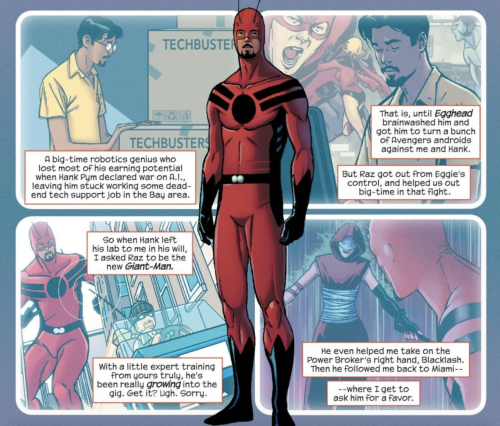 While Marvel comics return to stores today, the publisher announced a new round of comics that are going digitally only for single issues. The comics include those previously announced as well as new series added to the program.

These comics will only be available as digital comics for the time being; however, they will be available in print collections later this year for fans looking to add…

#scott lang, #mcu, #ant-man, #if i were in the mcu i would totally fall for Scott
4 notes · See All
movie-and-tv-diaryText

Game Night with the Avengers

Ship: No romantic relationships in any of these; various friendships listed in subheaders for each blurb.

Warnings: Totally chaotic to write but super fun! A few swear words sprinkled in during the first two.

“Change the color to…” Sam paused as his eyes scanned the cards in his hands. “Green.”

“Oh, eat shit.” You groaned and grabbed another card. “You knew I didn’t have green.”

“How was I supposed to know?” Sam asked. “If I knew, that’s your own fault for having your cards where I could see them.”

“You confessed!” You shrieked and Bucky rolled his eyes, setting down his card.

“Draw four, birdbrain. And make the color red.” Bucky said and you grinned.

“I knew you were my favorite for a reason, Bucket.” Bucky rolled his eyes at your nickname, and you set down your card. “Uno!”

“You punk, you teamed up with her!” Sam grumbled.

“Sorry, Sam. She knows too much, I had to partner with her.” Bucky set another card down, and Sam gasped. “Uno.”

“How could you skip me? Bro code!” You slammed your last card down and jumped up.

“Suck it!” You danced around the living room and sat back down beside Bucky as you passed him. “We make the best team.”

“Oh, no. It’s not over. Best two out of three.” You laughed at Sam but nodded.

“Let’s make this interesting. Loser does debrief paperwork for the next three missions?” You looked between the two men, who nodded in confirmation.

“No teams this round, kid.” Bucky cracked his knuckles. “May the Uno master win.”

“Okay, Y/N.” Tony spoke, looking at the spinner board. “Left hand on yellow.”

“Easy enough.” You said and placed your hand on a yellow circle.

“Peter, right foot on blue.” Peter placed his foot on a blue circle.

“I hope you’re ready to lose, Y/L/N.” Peter said and you stuck your tongue out at him.

“In your dreams, Parker. I’m winning this bet.” Tony called out your next move and you placed your foot on the correct circle.

“What bet?” May asked, seated beside Pepper on the couch.

“Peter’s never seen Lord of the Rings and I’ve never seen Star Wars. Whoever loses has to watch the movies the winner picked.” You explained.

“We have total nerds for kids, I’m telling you.” Tony spoke before he told Peter his next move. Peter moved into the next position as Tony looked down at his sleeping daughter laid on his chest. “Mo, please don’t turn out like these two dorks.”

“Says the man who built robots and has a workshop for his flying metal suits.” You teased as the game continued.

“How the f… How am I supposed to do that?” The only way to get your hand on red would be to bend over Peter’s body.

“I might.” You replied with a wink. “Now be still so I can win.” You leaned over Peter and stood on your tiptoes to bring your hand to a red circle. Your legs shook as you balanced, your stomach hovering over Peter’s back.

“Shit, you actually did it.” Tony said and you groaned.

“Barely! Call the next move.” Your voice was strained, your legs starting to cramp.

“Okay, okay. Peter-“ Tony was cut off by the sound of you yelping, Peter groaning, and a loud thud. Peter now laid on the floor, with you draped over him. May and Pepper laughed at the sight while Tony grinned. “Looks like it’s Star Wars time, kiddos.”

“And pretending this never happened.” Peter scoffed as you spoke.

“Tell that to my broken spine.”

“Oh, you’ll heal. Wait. Are you calling me heavy?!” You two continued to bicker as the adults walked off, getting ice and getting the room ready for the Star Wars marathon.

*Hide and Seek with Stephen Strange and Scott Lang*

“Scott, I swear to god, if you’re using your suit to hide small, I will actually step on you.” You called out as you roamed the boundary you had set for your game of hide and seek.

‘Oh, sure. Assume I’m the cheater.’ Scott thought before he looked around for you, hiding behind a blade of grass. ‘Righttt.’ Scott waited until you were out of his sight and ducked behind a nearby tree, switching back to his regular height.

“I heard your suit, Tic-Tac! You’re dead when I find you.” Scott looked around and tried to find somewhere else to hide. He started to climb the tree he was hiding behind, and sighed in relief once he settled on one of the branches, shielded by leaves.

“Alright, Wizard of Oz. I’ve looked through the entire boundary, where are you?” You finally found Scott when a twig from his tree hit your head, now you just had to find Stephen. Scott had shrunk again, and he hopped from tree to tree, searching for the magic doctor in the tree limbs. Not like he’d be up there anyways, you told Scott. The branches would mess up his hair. You rolled your eyes as you remembered the conversation, and you froze when you heard a familiar crackling sound.

“I believe I won.” Stephen’s amused voice followed and you spun around with narrowed eyes.

“You cheater!” You threw your hands in the air with a strangled growl. “Both of you, dirty cheaters. Scott shrunk and you used a portal to hide.”

“Technically,” Scott spoke as he landed beside you as his proper height, “I wasn’t small when you found me, so I didn’t cheat.” You mimicked him as you continued glaring at Stephen.

“If we’re using technicalities, I opened the portal in the boundaries. I never left your limits.”

“And where did you go while I tried to find you?” You crossed your arms. Stephen opened another portal, and you stalked towards him. “Strange, don’t you dare-“ You were cut off by the portal closing, Stephen gone with it. You sat down in the grass, laid down, and closed your eyes without uttering a word.

“This is what I get for playing hide and seek with a man who can shrink and a wizard.”

It was one of the rare times the team had a day off, and you and Peter thought it would be nice to give the parents a break. So with that, you had Morgan, Cassie, and all the Barton kids under your supervision; and what better way to spend time with the kids than a proper game day? You were all at Clint’s farmhouse, the team inside while you, Peter, and the kids were in the backyard.

“Now, we all remember the rules right?” You looked at the kids gathered around you and continued to speak when they all nodded. “Good. If any of you try to cheat, I’ll have my associate here take care of business.” You spoke with a funny accent, making the kids giggle, then nodded towards Peter who was wearing his Spider-Man suit. He was perched on a low tree branch, watching the kids while you stayed on the ground for this game. “Now let’s get started!” You cheered in your normal voice and got all the kids lined up. “Spidey-Spy! Ready?”

“Ready!” Peter called from his spot and you dramatically turned around.

“Green light!” And the kids were off. Lila and Cooper took big steps, in their own competition with each other. Nate was trailing behind them, walking in his big sister’s shadow and giggling. Morgan decided she would hop her way to you, causing Cassie to laugh as she walked. “Red light!” You spun back around, and the kids froze. When you got the all clear from Peter, you turned back around and the game continued. “Green light!” You paused for a few seconds before spinning around. “Red light!”

“Awww, Cooper! Back to the starting line, buddy.” Peter called out, and Lila grinned at her older brother.

“Ha-ha.” Lila taunted and Cooper huffed before going back to the starting line.

“Green light!” As the game went on, little did you and Peter know that the parents were watching you from the porch.

“I don’t know who’s going to be more tired after today. The kids or the teens.” Clint said and Tony scoffed.

“The kids will definitely tire them out first. Maybe not Peter. The kid practically vibrates with how much energy he was.”

“It’s a sweet thing they’re doing for us.” Clint’s wife, Laura, smiled as she watched the kids. Cassie seemed to have won, as Y/N was spinning her around and Laura could imagine the scowl on Cooper’s face and Lila demanding a rematch.

“And I plan on taking advantage of it as long as I can.” Pepper replied, Tony’s arm draped around her.

“While they’re occupied,” Scott spoke up, “drinks?” The parents all agreed before heading inside, leaving the kids outside. What’s the worst that could happen?

Welcome to Concordia, SCOTT LANG! We are excited to have you here in the city. Please collect your Stark Watch and check your messages for a guide on how to complete your registration!

“We’ve been waiting for days for you and your friendsies and the promise of a real fight. And you just bring us kids playing dress-up.” – Green Goblin

Cover art for Avengers of the Wastelands #004 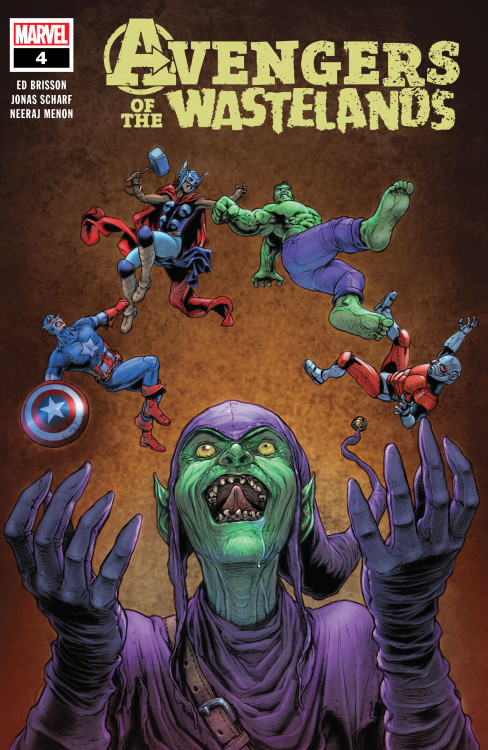 From Avengers of the Wastelands #004 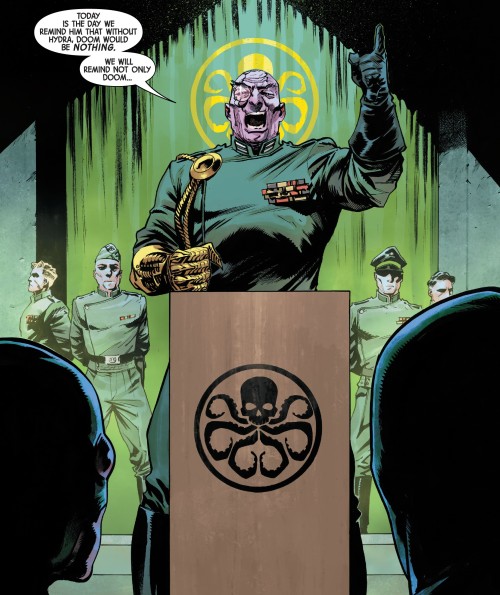 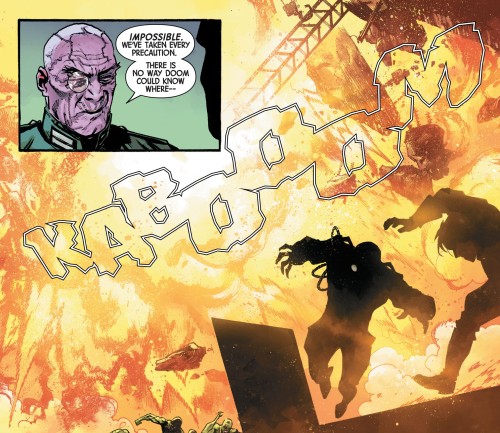 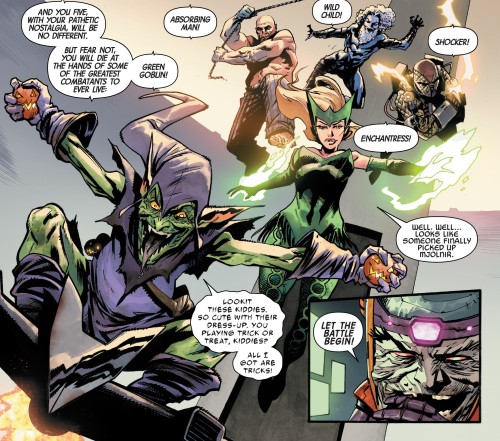 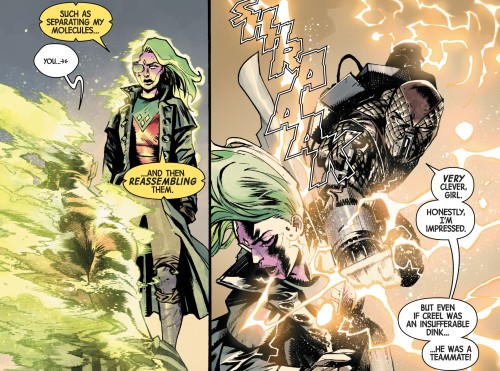 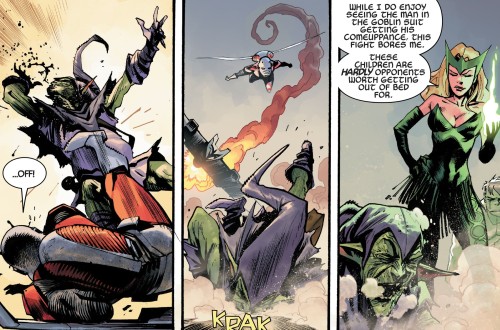 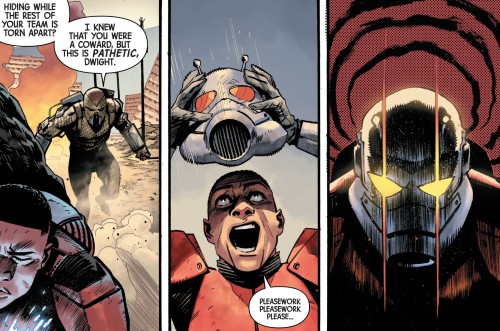 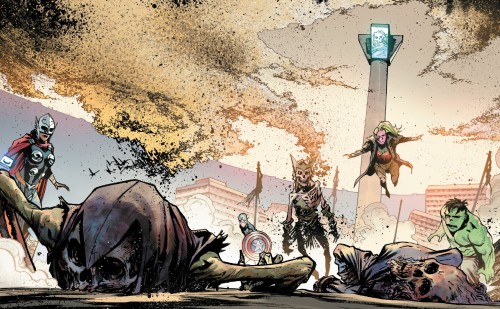 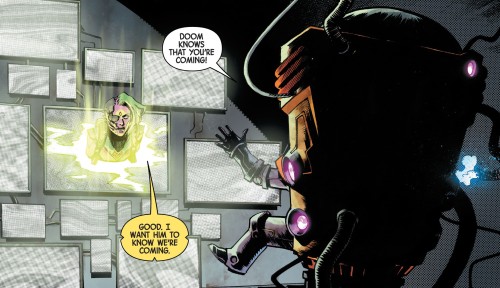 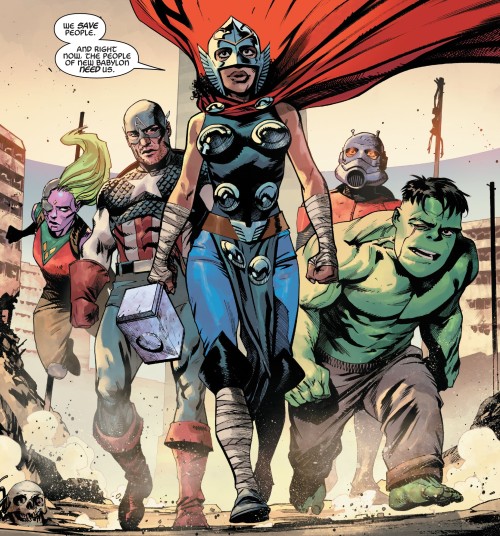 It’s okay to steal from criminals, right? Unless you’re talking about five of the biggest banks in America. That’s where it gets confusing. 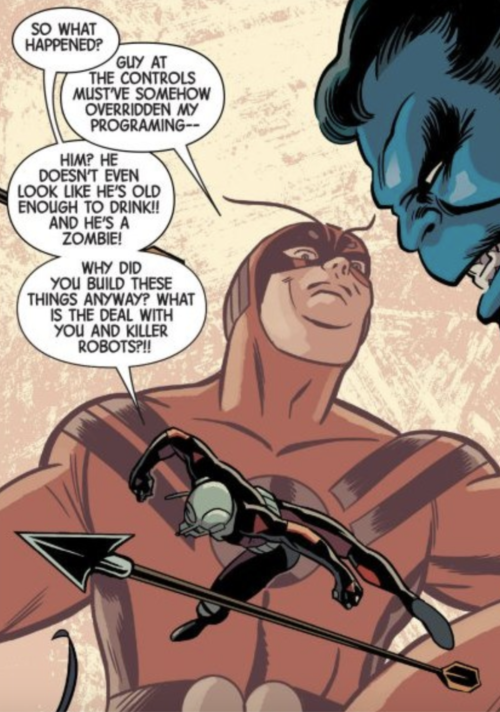 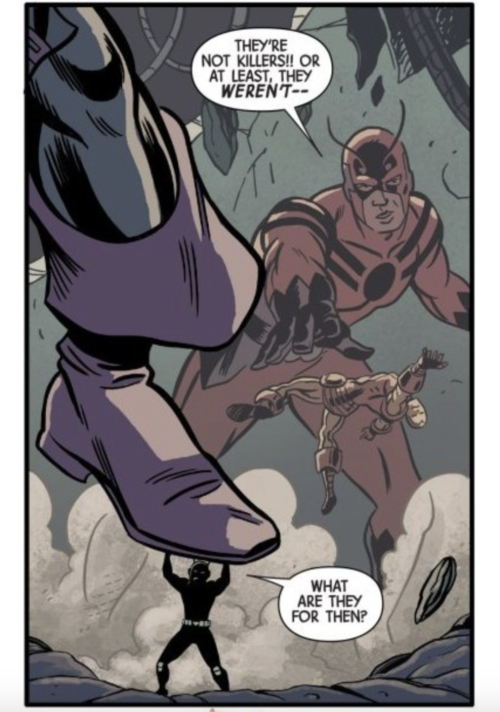 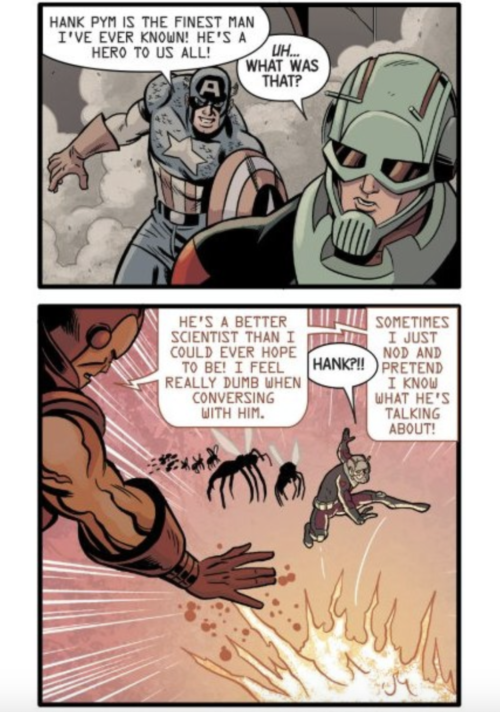 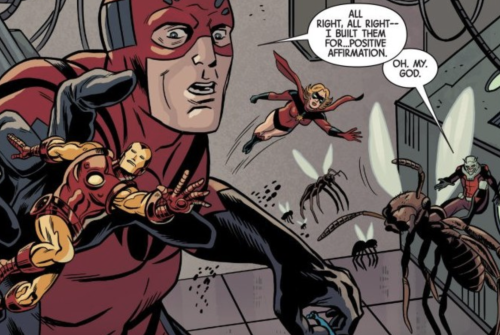 Tony: I must have looked like a stripper with all of my twenty dollar bills