I want to search for people talking about how bad handled was Kristoff an Anna´s relationship , but i´m afraid that i´ll find Els@nna fans.

Like, yeah, the relationship is awful but still better than incest

It’s rather funny how whiny and self centered EA shippers are. They act as if they’re the superior frozen fans and keep saying that no one cares about Kristoff or Kristanna just to stay in their delusional little world where everything revolves around Elsa and her support dog sister Anna and when focus shifts to anywhere but Elsa they start whining and ranting as if the past 7 years their precious queen hasn’t flooded the market with merchandise and such. Little do they know that there are actually people who care about Kristoff, Kristanna or even solo Anna for that matter, otherwise how do they explain the countless fan art, fanfiction, cosplays etc surrounding them. But of course why would they even notice the love that Kristoff, Anna or both as a ship get when they’re so self centered on their toxic and disgusting fandom that even if they say that they care about both sisters equally, by the moment Anna’s away from Elsa they don’t even care about her and focus on their precious little snow queen. I’m honestly so sickened and tired of that part of the Frozen fandom, even when I try to ignore them, like I probably should as these sad people don’t deserve any of my attention, they just don’t seem to let it go and keep on ranting and whining about how awful the F2 ending is and how Elsa is not home and is miserable at Northuldra, where SHE chose to stay and how Anna and Kristoff don’t actually love each other despite Disney trying to say otherwise even though the movie has been out for about 10 months. At first I didn’t like the snow sisters separation at all, but in the end I love it out of spite cuz it just proves that Disney cares more about keeping Kristanna as close as possible than keeping Anna and Elsa as close as possible. So anyways, dear EA shippers, no matter how much you whine and cry about the attention KA gets, you just gotta realize that no one cares about your disgusting incestuous ship.

frozen writers: okay let’s take this andersen fairy tale and make a movie that focuses on family/sisterly love out of it instead of focusing on romantic/sexual love!!

white disney fans on tumblr: OMG elsa and anna are SO IN LOVE they have SO MUCH CHEMISTRY you can’t tell me the writers don’t SHIP ELSANNA XD

frozen writers (and fans with common sense): oh no

I can’t get away from the “anti-anti” trash, can i? 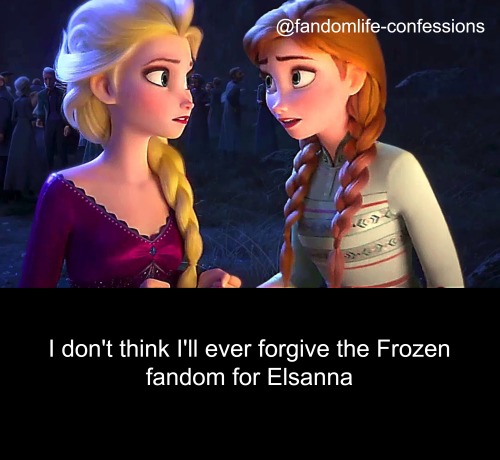 I’m not. Is there something I did to make you think I was? If so, I’ll delete it.

#anti elsanna, #just shut up, #it's both unhealthy and toxic, #even if it's just fictional
105 notes · See All
bruniprotectionsquadText

Me and my sisters interact in a lot of the ways elsa and anna do- like i hold hands with my sisters when we’re walking. And we hug alot.. yknow.. like sisters. And the fact that elsa and anna doing those things is always being interpreted as romantic by so many people in the fandom is so frustrating. It makes me nervous to do things I normally do with my sister because now I think it could be interpreted as romantic and I dont want that.

God, I wish we could have a good, healthy, platonic relationship between sisters without some people deciding to be weird.

#anti elsanna, #anti shipping, #ok to reblog, #personal, #EA shippers have gotten into my fucking head and I hate it
39 notes · See All
bruniprotectionsquadText

Literally every blog tungle is reccomending is an incest blog i hate it here.

If ur an anti els*nna frozen blog, drop ur @, cus all the frozen blogs that tumblr is reccomending are all incest blogs and im tired of it

Self care is blocking EA shippers 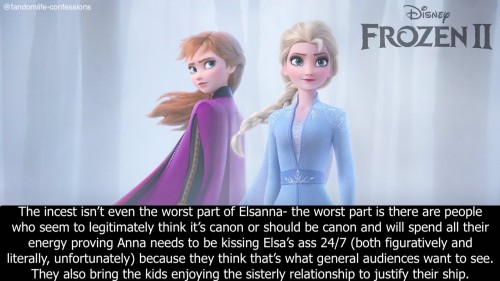 POV: Elsa finds out you ship her with Anna

#my phone is ok it was just hairspray, #elsa, #anti elsanna, #frozen 2
59 notes · See All
dxntloseurheadText

since some of y’all can’t fucking read apparently

The fact that elsanna still exists is insane.

uhh no, anyone who ships them needs to find god. 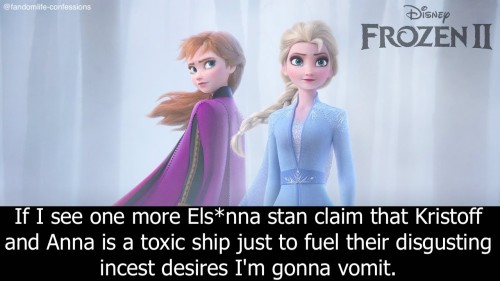 Can I just say something about ships-

No matter how hard people like to deny it, what you ship reflects at least a little of who you are.

Some humans can be so disgusting and ignorant sometimes, so I’m really hoping none of my followers are into immoral ships. You guys are my people, and I pride myself on you guys.

#anti elsanna, #anti starker, #anti cegan, #anti reylo, #anti thorki, #pro sane shipping, #let's be humans, #and not ignorant selfish hyenas, #there's so many good ships out there, #going onto, #frozen 2, #tag, #and seeing all the ea sucks, #I have a sister, #we're very close, #it made me feel so sick
36 notes · See All
Next Page