Each and every hp ship is valid. Except dr*mione and pedo ships. 👁👄👁

The HP fanfic community drew me in using Sirius + Remus as bait, and then they sunk their claws in with Drarry. But don’t get cocky and think for even one second that you’re about to pull me into that Snamione shit some of you got going on here.

#drarry, #wolfstar, #hp, #anti snamione, #for the love of god why
6 notes · See All
hermiones-amortentiaAnswer

And I am sorry that you went through that. xx

Oh my bad. I don’t really come across snape ships that often. I was talking about fic counts. But yeah you are right. Snamione shippers are probably more vocal. I don’t know about them much. Anyway Both are disgusting as hell. ugh😤

Biz they are dumb??

I dont want to be rude.. But its the only way to describe this shit.

Snamione doesn’t make any sense. There, I said it. And I’m not the only one who thinks that. They never even had. a. single. conversation. And judging by the fact that he calls her a insufferable-know-it-all you can tell he’s annoyed by her personality and overall way of being. There is literally nothing to support this ship. It exists only because female fans see themselves in Hermione. 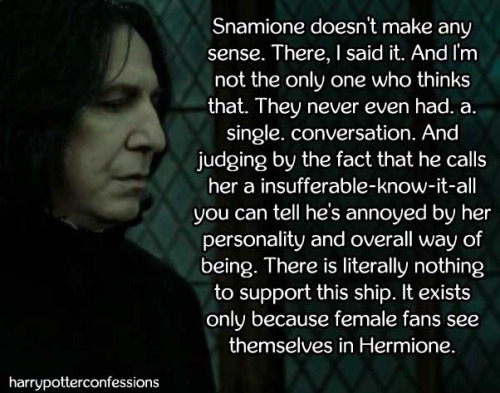 #harrypotterconfessions, #ships, #anti snamione, #severus snape, #hermione granger, #fanfic, #snamione, #gentle reminder to not send in your confession more than once; as i got this one two or three times
167 notes · See All
sunset-and-periwinkleText

How and why is Snamione a thing??

why there aren’t Pro Snape guys in anti snily and anti snamione tags??? you seriously ship this shit???

Omg I pointed out that I hate Lily (so I also hate Snily) and Snamione, but these pro blogs are still following me. Wth guys?

#anti snamione, #found these on Google, #someone kill me, #poor Alan rickman
18 notes · See All
whatifdestielText

snape was a lot of things but he was not a pedophile. why y’all shipping him with his students? like legit you looked at 14 year old harry/hermione and thought “yeah, they’d be perfect together” gross ass bitches. i may hate snape but the man deserves better than that and so do harry and hermione.

It annoys me how there are some fanfics pairing Hermione with S*verus or Dr*co. Not only the former is a bully to her, he’s also a grown ass men in his thirties while Hermione is a teenager (!!!). Meanwhile Dr*co insults, bullies and humiliates her basically all the time. Both are absolutely disgusting and also it’s so messed up that someone would ship a female character with a character that treats her so badly. Misogynistic af

I just want to know who was the first one that looked at Hermione and Snape’s interactions and was like: Oh God yes they are so in love.

Can we perhaps not ship Hermione with her racist bullies and tormentors?

#maya talks, #anti pansmione, #anti dramione, #anti bellamione, #anti snamione
101 notes · See All
josiecariocaAnswer
I think I read somewhere that you don't particularly enjoy Snape/student pairings, correct me if I am wrong. Is this limited to the actual period that they are in a student/teacher relationship or you would also mind him hitting it off and/or be involved with an ex-student?

Ok, this answer has to come with a disclaimer, me thinks, because I do have followers and mutuals who are into those ships and I´m not here to police anybody´s tastes, so this is entirely my opinion, and I´m not trying to call anybody out or invite debate.

But the answer to your question, anon, would be a a hard NO for ANY Snape x student pairing, even with the stipulation that the student is now grown and no longer a student. Actually, teacher x student pairings in general are huge NO for me, period.

I´ve answered this before, but I think it bears repeating: I´ve been a teacher for years (now I´m moving to a different professional field), and for most of my teaching career I´ve taught children and teenagers from ages 9 to roughly 17/18, and I´ve also taught a lot of adults. Because of my personal experience, I just can´t find anything attractive or normal about student x teacher pairings.

There´s  the thing, when you meet a person when they are 11 or 12 (like Snape meets Hermione or Harry, the characters he gets paired with the most), that has an impact on how you´re going to see this person for life. It REALLY does. I have met former students of mine who are now adults (I actually live in the same neighborhood of at least two of them and see them around somewhat regularly). To me these people will always be the same kids who played Pokemon cards I had to confiscate so they would pay attention to class, the same kids whose stories about fairytales and astronauts I´ve corrected and graded, the kids who dressed up and played games in Halloween parties I helped organise, whose parents I had to sit down with to discuss their behaviour, who did stupid shit in my classroom, who wrote cringe-wothy notes to each other, or argued about silly shit like video games or who would get to be which character in a play.

To me they´ll always be kids.

So, as far as I´m concerned, the mere concept of a teacher having romantic or sexual feelings for a student  they met when they were children is, even in fiction, is at best VERY  weird, and at worst borderline predatory and incestuous. TBH, even with adult students, there´s an inherent power imbalance in student/teacher relationships that all too often carries out to life after school (and with adult students there´s often the complicator that if the teacher has taught or trained them for a specific work field, they WILL meet them in work-related situations, and there will be work-related issues on top of whatever power dynamics they´ve brought from the educational setting. I´ve seen it happen in academic settings quite often.)

With Snape there´s also another aspect that irks me. Snape has a TON of emotional baggage. He´s immature, he´s stuck in the past, he´s still suffering from things that happened to him when he was a teenager. To pair him with a former student, somebody young enough to be his kid, I believe that would be reinforcing the fact that he´s struggling to grow into a functional adult. It would keep him in an eternally immature emotional state. Severus is a 30-something year old man who NEEDS to grow, to address his own demons, to let go of his teenage angst. The last thing he needs is the emotional mess that a releationship with a former student might cause both him and the person he´s paired with. (I won´t even go into how getting together with Lily´s son of all people would just get him perpetually stuck into a cycle of emotional obssession). Now, of course there will be writers out there who actually want to write that scenario. And that´s fine, literature is full of amazing stories featuring deeply flawed and problematic relationships. It makes for interesting reading. But it´s not what I want to write personaly. I want to write Snape growing out of his issues, not drowning in them. That´s just my personal writing choice

“But it´s not real life, people can ship what they want” some will say.

I know. That´s why I don´t go around telling people to stop shipping these pairings. I just block the tag. And I really only address this topic when asked.

Hermione: *@ dramione* Ugh, seriously? People ship me with this fool?

Hermione: *@ harmione* Harry’s great and all, but the thought of him and I in a romantic relationship…? Definitely not.

Hermione: *@ ginmione* Ginny’s great… But I’m not interested in girls.

Hermione: *@ snamione* OKAY? WHAT? WHO THE FUCK CAME UP WITH THIS????? OBLIVIATE!

Hermione: *@ pansmione* These silly muggles… Even if I DID like girls I wouldn’t ever want to date this old cow.

Hermione: *@ Lucmione* WHAT IS UP WITH SHIPPING MY FIFTEEN YEAR OLD SELF WITH FULL GROWN ADULTS WHO ARE LITERAL DEATH EATERS?

Hermione: *throwing her computer out the window* ALRIGHT, I’M DONE WITH THIS SHIT.

#i can physically FEEL the irony here, #anti snamione
15 notes · See All
drarry-imaginesAnswer
What are your opinions on Snape x Hermione and Remus x Draco etc because personally I just think the age gap makes it pretty gross

Age gaps like that make things incredibly gross, I don’t care if people age them up in fics the fact that its canonically a child you are shipping with grown ass adults is fucking disgusting.

I’d rather ship Romione and Drarry. Like, ew, Snamione, hell to the no T_T

But what a cruel question.