Big Hit Producer Kim Namjoon has orbited his supposed soulmate for years. It’s frustrating, this constant state of almost meeting. Then the words on his arm disappear. Right as a bike messenger with a very familiar face is struck by a delivery van and pretty much dies in front of him.

Working as a bike courier by day and underground rapper pretty much any other time, Min Yoongi’s life and work takes him all through the Gangnam district of Seoul. The regular changing of his soul words is a given, right up until they disappear as a van runs him down.

Near death finally connects Namjoon and Yoongi, but that’s the easy part.

No one is prepared for the New Year… especially when Big Hit manager Kim Seokjin discovers his soul words were spoken—by no less than a dozen people in the same night—but he has no idea who said the ones that count. Meanwhile bartender and club owner Kim Taehyung becomes inexplicably withdrawn after the Big Hit New Year’s bash. There’s an emptiness building in Tae’s soul, and he can’t figure out the source. All he knows is something is missing… and it’s tearing him apart.

Or… Tae said the words. And Jin didn’t. 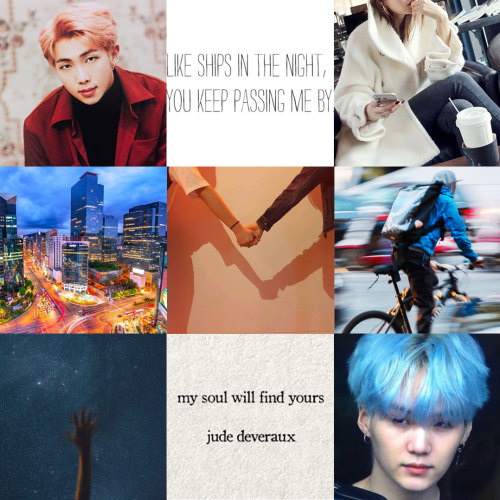 The photograph said it all. Especially the thing Jimin wasn’t sure should be said.

So there it was, for any and all to see. Soft. Unbearably soft. Jimin’s eyes, not looking to the camera but cast toward the object of his unrequited affections. The smile on his face stripping him bare. There was no way the others hadn’t noticed. No way he hadn’t noticed…

Oof… there’s a long way to go here. But my first story went someplace unexpected and magical… and I’ll probably not even come close to a bingo, because I have TOO MANY IDEAS.

When it comes to allowing the dead to use him as a temporary voice, medium Min Yoongi takes personal protection very seriously. He starts every day with a visit to Kim Taehyung, who inks the best body wards in the city… But what is Yoongi to do when the imprint Taehyung makes leaves Yoongi craving far more than a professional relationship?

To the uninformed, it sounded like a place to get a car fixed, or maybe—given its quaint semi-basement location beneath a chic eatery in Hongdae—a discreet adult store or spa. It was actually home to the best body ward witch in all of Seoul. If not for the recommendation of his best friend and Seoul police detective, Kim Namjoon, Yoongi might never have known what a difference a body ward could make, especially for a medium. Now, Vante’s was the place he visited every day he worked to magically “armor up” before his shift. His work paid better than average for a government employee, what with the high rate of burnout and hazard, so he could thankfully afford the nightly process of getting inked.

He was running late tonight, his fourth week working with the ward witch, so it was almost sunset as Yoongi hopped the bus from his apartment, transferred to the subway, and exited at the Hongik University Station. From there, it was a few blocks’ hike to the shop. He slipped into the store, breathless, the bell above chiming his arrival just as the sun dipped below the horizon.

Kim Taehyung—Vante to most everyone who ventured in here—greeted Yoongi with a cheery wave. The reception area was a small kitchenette and café style seating, where Taehyung currently poured steaming water into a plum colored cast iron teapot. Yoongi’s gaze fell on strong hands, climbing slowly to the almost painfully lovely face gracing him with a welcoming smile.

Taehyung was tall and of an almost stocky build compared to Yoongi’s slight frame. Skin golden and warm next to his own moon-kissed tone, dotted here and there with absurdly attractive freckles and moles. He scooped a long, veiny hand through his hair, black and wavy and shaggy enough to earn the scorn of clean-cut elders, wild enough to make Yoongi’s fingers itch to touch. To tangle and tug.

“Would you like some tea?” His voice was something…special. Low. Calm. Just a hint of huskiness. “Lemon balm tonight.”

He’d never been the biggest fan of being out and about, but somehow, Taehyung soothed the tension in him away with a smile and a handful of words. Here, he always felt welcome. Safe.

“Ah, Taehyung-ssi. Sorry I’m late. I may have run the last two blocks.” His cheeks burned, partly from effort and the winter chill, partly from being caught out. “Tea sounds wonderful. Thank you.” 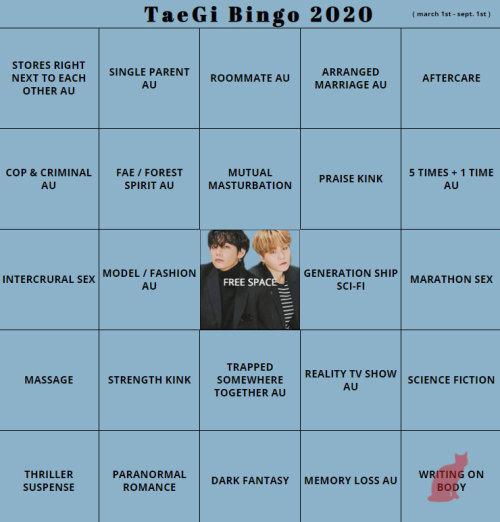 When it comes to allowing the dead to use him as a temporary voice, medium Min Yoongi takes personal protection very seriously. He starts every day with a visit to Kim Taehyung, who inks the best body wards in the city… But what is Yoongi to do when the imprint Taehyung makes leaves Yoongi craving far more than a professional relationship?

No matter how many years he’d worked the night shift, part of his brain craved a daily dose of (at least indirect) sunlight. The dead, however, didn’t feel the same. They came alive—for lack of a better term—after dark. And as a court-appointed civil medium with a master’s degree in spiritual diversity and social work, the dead and dead adjacent were his clientele.

Yoongi’s job more or less entailed helping the living make peace with the dead. Sometimes it was the other way around, though that was distinctly more dangerous. The dead weren’t quite as aware of things like boundaries and personal space as they might have been while alive. They wanted what they wanted, and sometimes they decided to just take it. Which led to…

He carried the best headphones his money could buy. The very visible, over the ear, noise-canceling variety, because the dead noticed when they were noticed. Inevitably, in a city of ten million-plus, in a peninsular country ravaged by historical wars—there were a lot of dead to contend with. He’d learned how to stare into the middle distance, as though never really focused on much of anything. And the dead gave off a low radiance, a sort of glow that made them very easy to visually spot.

Sound on the other hand—well, it wasn’t easy to ignore sounds he didn’t see the immediate source of. More than one spirit had caught him off guard that way, and involuntary possession sucked ass. At best, he lost a few hours. At worst—well, he hadn’t experienced the worst. He’d lost coworkers who had, though.

Schedules were for weaker men than Taehyung and Seokjin. Or… stronger ones. Taehyung was a little fuzzy on those specifics and only partly because it was the middle of the night. Jin’s tenth in Daegu. All he knew for sure was the moment Jin sensed he might even be thinking about being hungry—anytime, day or night—Tae found himself hauled off to the kitchen.

Leading to his current situation.

Wherein he leaned against the counter and admired the view.

It was two AM—Tae’s family long asleep—and Seokjin was cooking. More importantly, or perhaps most importantly, Jin was cooking shirtless. With his mouthwatering shoulders almost completely hiding the stove from view.

He buried a frustrated shout against his pillow.

In lust with a beautiful bartender who could be filling stadiums instead of drinks, and soul-bonded to some unknown he just couldn’t invest in. The longer he was away from Seoul, the easier it was to not even worry about the whole soulmate thing. Of course, he asked after them. But clearly, his life would go on without them.

Taehyung, on the other hand…

“I just want to talk to Taehyung. Before I commit to a life of not Taehyung. Is that too much to ask for?”

| Sunshine-hyung: keep your head down for a few days, taehyungie

Why did he have to be the one who disappeared? What was Kim Seokjin’s role in this farce? A new message chimed.

| Sunshine-hyung: people are camped outside your apartment building

Sorry? Hobi’s only fault in all of this was his enthusiastic insistence that Taehyung and Seokjin needed to meet. And, okay, maybe that was the catalyst for the current shit storm, but— Tae’s eyes widened as he saw his social media notifications neared two thousand.

“What the fuck is this?” he whispered, a gossip headline catching his eye.

Who stole the heart of Korea’s favorite big brother? Get the scoop on Singularity’s gorgeous bias wrecker, Vante.

Yay! New year, new fic! Took me a bit longer than I’d hoped to wrangle this first chapter into being, but here is the opening of part 2 of Written in the Stars: Colliding Stars.

It’s the last chapter… how did that happen so quickly? I’m not complaining… just pleasantly shocked. Happy reading!