-hello, my name is Alice, I’m Brazilian and in my first year of college. Translation is my passion, but before I sign up to any professional translation websites, I wanted to test out my skills in a more informal environment. So if anyone is interested in getting their work or text translated Portuguese-English and vice versa, for free, can contact me here on Tumblr and talk about it :)

-even if you’re not interested, liking and reblogging would help me a lot as well :)

At age 11, Stiles banishes a demon so far away from Beacon Hills it leaves the dimension as a whole. The Nemeton thanks him for his service with a gift from the Earth and Moon- a Familiar. One Stiles has yet to meet, but has felt the pull of.

Ten years later, and a much wiser and much more powerful 21 years old Stiles is dealing with university finals, the repercussions of Old Magic cast by a too-young body, and the sudden pull of an long-since-dormant bond that he’d rather ignore.

In which Stiles is a Witch, Derek is his familiar, the pack is… well, the pack and Deaton is tired of it.

Me, when I re-read my own works:

I will never write this well again. This is the pinnacle of my talents. I have blessed myself with such beauty and I shall never see this skill again. Pure poetry, such raw emotions, perfect character representation… all neatly wrapped into one incredible story.

Also me, when I re-read my works:

What is the garbage? What is the flaming dumpster fire? How could anyone read this with a straight face? How do I not have comments from readers bashing my terrible-ness? This is horrible… an absolute embarrassment…

And also me, when I re-read my works:

lol I should just jump off a bridge.

I finally finished all of your drabble requests!

@topshelf2112-blog Charles giving a tip of his hat or, in this case book, for your being so kind as to allow my name to appear first on our little AO3 collaboration! And, I do as well, seeing that my contribution was minimal at best. Which reminds me…..stay tuned for second pic! Your gonna love it!

Another five - count ‘em, FIVE - chapters are now live on the 6th Episode of Return to the Falls, my surprisingly acclaimed Dipcifica / Next Summer Gravity Falls Fanfiction Series. These latest four continue the trend of drama, arguments and breakfast foods. Scandal, and elucidation on the historic figures within family Northwest!

The Historic Horrors of Family Northwest.

Archive of Our Own / Fanfiction.net

It’s nearly halfway through Summer, and Preston Northwest is acutely aware that an old 'friend’ will be visiting any day now to negotiate a deal. Meanwhile, Toby Determined, haunted by the judgement of his Great-Grampy, finds himself at the discovery of a scandal.

With Dipper growing ever-desperate to ensure their relationship will last past the summer, and Pacifica growing increasingly perturbed by the true role of her family in Gravity Falls - egged on by the Grunkle’s own investigations - something has got to give.

How far has the Northwest family’s power truly declined? How much influence did the family truly wield? And how does Pacifica herself key into the family’s legacy?

Episode 6 of Return to the Falls. 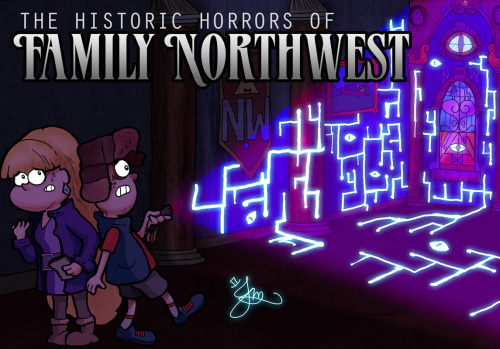 Ciao mio amore, I’d like to start a new segment to my blog. As you know, I support fan-fiction authors and try to share their works as my show of appreciation. Fan-fiction authors wok hard to produce amazing content for us to enjoy for free. They don’t receive any royalties for their writings, only surviving by what little comments and likes they get.

I feel we should properly give them the stage. That is why I’d like to start a new Fan-Fiction Live Reading segment on my blog. Every Saturday night at 8:00pm (ETS) I will open the OHSHC Walkie Talkie Discord Server for us to join the same voice chat.

You may me wondering what kind of Fan-Fiction we will be reading. This is where I’d like this segment to be interactive with you! I will provide a link (located above on OHSHC Walkie Talkie) to the Discord Chat and there you can send me a fic recommendation that you’d like to see being read out-loud. It can be one of your own or a favorite of yours.

There a few guidelines for Fic Recommendations;

If no one sends recommendations I will read a few of my personal favorites. I don’t want to read my own stories because I feel you guys see enough of my writing already.

This will be a weekly thing so look forward to a Live Reading on Discord! (Holiday weekends will be exempt.)

i’ve been thinking for a long time of putting like…. old outlines up on ao3?  like there are so many fics that i don’t think i’m going to finish but i don’t want to give up on and idk what to do with them.  i don’t know if that’s something y’all would be interested in or if people would just get mad at me.

Me not knowing what the fuck stories they’re talking about:

Look, if it’s been over two hours since writing this stuff it has been purged from my head.

Day 18: Fireworks [FIREWORKS]: Fireworks welcome summer, festivals, and declarations amid the deafening sound of their explosion.

Day 22: Perfume [YOU SMELL LIKE BEING COMPLETE AND I HATE IT]:  Tsukishima it was always pointed for different things. For being: tall, intelligent and for his bad forms to talk with others. Now one more thing appears in front of him.

Day 27: Flowers [DAFFODIL: MISSFORTUNE OR HAPINESS]: Kuroo stopped to look at one of the petals with a sarcastic smile. Not only did he suffer from a disease about one-sided love, now that flower is laughing at him. Apparently those were yellow daffodil petals, which if they only gave you one predicts misfortune. Kuroo ran his hand through his hair pulling it back and laughed. How his love is going to be reciprocated?

Prompt 20 [WRITED LOVE]: Tsukishima owns a bookstore, Kuroo is an author of a mediocre highland-romance novel which is somehow well received and has a reading in Tsukishima’s bookstore.

Please reblog this if you’d be ok with someone leaving a short comment on one of your fics! The comment box can be intimidating, especially if you have trouble organizing your thoughts. This is a reassurance that it’s ok to say something small like “i really liked this’ !

Hello there! I noticed that I don’t have a link to my story on my Tumblr (which was literally created for that story lol), so i plant on reblogging this post occasionally to have a proper link. If you want to follow my story, which will be updating quite soon, check it out!

aw, ao3 isn’t doing the whole progress bar donation thing that made antis so mad this time around :(

#ao3, #watching antis froth at the mouth about ao3 getting money always brought me joy :(, #fanfiction, #archiveofourown
5 notes · See All
ali-amberfallLink
Embers - Ali_Amberfall - The Boys (TV 2019) [Archive of Our Own]https://archiveofourown.org/works/26899915

The first chapter to my Lampligher/OC story. Hope you all enjoy!

A quick little oneshot of how Lamplighter may of discovered his powers.

Google docs is fantastic for collaborative work, especially for people who work with beta readers. But getting from there to here can be tricky. Abundant screenshots.

A thorough guide that covers all steps to make posting to AO3 easy. Also addresses the dreaded italics bug. This is basically how I work too, highly recommended.

I haven’t been on tumblr in ages but it seems like I can’t find any decent The Boys stuff fan writing wise. Fanfiction.net and Archiveofourown are kinda dry. So! I suppose I can start writing some stuff. Really want to get a Lamplighter fan fic going but if you have any requests I don’t mind writing them!

Since it’s my favorite month of the year I decided that I’ll challenge myself and try to write some Firstprince AU’s on Ao3. If you have any ideas you’d like to see, let me know :p

Chapters: 1/1 Fandom: Peaky Blinders (TV) Rating: General Audiences Warnings: No Archive Warnings Apply Characters: Tommy Shelby, Arthur Shelby, Charlie Shelby Additional Tags: Angst, Heavy Angst, Post-Traumatic Stress Disorder - PTSD, Suicidal Thoughts, Emotional Hurt, Emotional Hurt/Comfort, Family Feels, but oh god the angst, I cannot stress this enough, and proper emotional angst, Simply Tommy in the season 5 finale, Oh yes, spoilers for Peaky Blinders, Protective Arthur, BAMF! Arthur Summary: A one-shot of how the season finale from season 5 could have progressed. Tommy is distressed, to put it lightly, and he is alone with his pain. Not a good idea, not a good one at all. His emotional trauma and pain from everything that has happened to him are finally catching up and crushing him.

#oh yeah, #btw I wrote this, #devilbunny is me in case people are wondering, #archiveofourown, #fanfic, #peaky blinders, #tommy shelby
0 notes · See All
your-void-senpaiLink
The Pact | Archive of Our Ownhttps://archiveofourown.org/works/23377543/chapters/65122624

Hey there guys, gals, and NB pals. Here is the final chapter of The Pact.

Now up on Ao3 and Fanfiction.gov