Prompt: Hey there, I have a prompt for you if you’ll take it! I absolutely loved your wingfics with Virgil, and was wondering if we could have something similar with Merlin? Maybe with his magic slowly turning him into a more ethereal magical being and giving him wings that he has to figure out how to deal with and hide? Possibly Arthur finding out? Thank you!

Thanks for the prompt, babe!

Pairings: merthur, can be platonic or romantic you decide

A bird falls out of the sky when Merlin is little.

is arthur pendragon back yet?

Arthur going from taking Carleon’s “and you’re not Uther” in his father’s son to being the utmost insult he could ever be given, to him confidently claiming “I’m not my father” to that villager in s5 is the growth this man deserved.

i think that this is something stans needs to see. so many times the question “what has gwen ever done” or “gwen is only a love interest” goes around and around in this fandom and it is simply not true!

if stans had actually taken the time to look into this wonderful character they would see all the amazing things gwen has done.

did gwen not fight in the battle of elador? did she not stand up for the rights of the women there? did she not advise and guide arthur when he sought her counsel? did she not look after uther, the man who had torn apart her family, murdered her father and nearly killed her twice just so arthur could focus on his duties without worry he would fail his people?

Time for a change -chapter 11

I could actually write separate essays on each of the Merlin characters and how their endings were tragic and honestly i am this >< close to actually doing it.

Winter feels like the death of a loved one, the snow freckling his face like cruel tears of a fake God. Like a harsh slap on the face, after confessing to loving someone. It feels like the first day of work, nerves tangling up in the pit of his stomach, and a rock placed on his throat, so he could neither speak nor move. Winter feels like the cold and bright crown on the King’s head. Harsh, and frightful, and yet, it feels like mercy and forgiveness. Winter compels his heart to shiver under wrathful rage, when he knows all it wants to do is beat harder and join it’s other half. When its time for Winter to arrive, he slows his heart, saves his breaths, for he doesn’t know when he might need it, because the unyielding season almost always steals his heartbeats and swallows his stubborn breaths.

Summer smells like the pyre. The countless screams of his beloved kin while smoke rises in triumph. Summer is a cruel reminder of all he has lost, and all he is yet to gain, because despite the thousand summers that have passed, not a single one of them have brought him the joy he was promised. Summer smells like copper, the tinge of his blood boiling under his skin, and harsh metal clanging away in the blacksmith’s forge. Summer doesn’t care if he rolls beads of sweat off his back just to help an old woman cross the road, carrying the weight of her belongings and the world on his shoulders; it simply takes. It takes his will and saps away his energy. Summer is an ugly beast, a vampire, drinking his soul to feel itself, however broken it may be.

Monsoon brings water to his eyes, just how lightning brings lashes to his back. Each whip of thunder is a harsh blow, peeling away his skin and laying him bare to the judgment of the world which condemns him. Monsoon feels like limp wrists hanging from the ceiling and damp hair sticking to the curve in his forehead. Its the Fomorrah, sucking away everything and leaving behind only empty memories and numbing aches of the heart. Monsoon is no friend to his shivers or trembling, when he hugs his pale body at night, drowning out whispers of his killings. Monsoon leaves him with the burn on his chest burning a little more than before.

Autumn brings melancholy to his already in depth sadness. It feels like the shattering of his soul, and the silence threatening to swallow him whole. Autumn is the static on the television, and the frequency on the radio. It brings hope to his broken dreams, only to take it away, like the lack of an expected crunch of an orange leaf. Autumn is the pale, flat stone in his hand as he skips it over the water. It threatens to go a long way, only to widen the disappointment in his heart when it drops in the shallow waters after one beat. Autumn is the dust in the library, laughing at his aching pain while he pushes it away, adamant in his search for hope. He lies in the meadow in the bright glow of the setting sun, waiting for his King to rise, and Autumn leaves him only with loss.

And so the cycle repeats, with each season pushing him further into himself, and further away from the world, and from Albion. And in the end, when the dust clears and the stones crumble away, Merlin is all that is left standing of the great Empire; alone, stubborn, hopeless. And thus, Arthur rises once again for the time has come, when Albion’s need is finally at the greatest, and Spring takes birth once again.

Merlin | 1x08 The Beginning of the End

I just want to say a big thank you @aalizazareth for making this story awesome. I appreciate it hun.

There is a criminal shortage of winged Merlin content 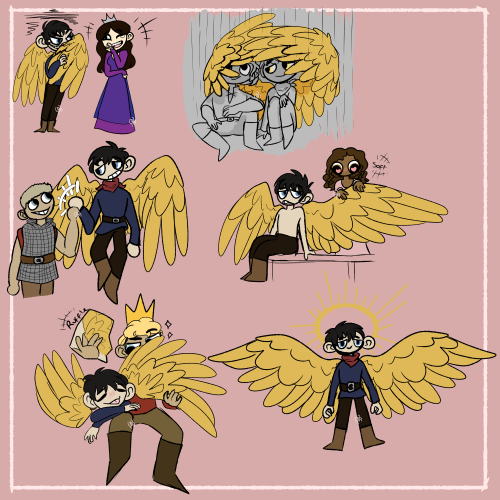