So I’m like totally convinced that in their down time the Bakusquad convince Midoriya to engage in quirk related shenanigans with them. It’s super easy bc of how he is, and at some point they get Bakugou in on it. It’s super easy to get him in on it too, as we saw with the culture festival, all they have to do is throw out a “oh yeah I guess you can’t keep up with Midoriya” and he’s full in with his competitive spirit and inferiority complex.

It starts out kinda rocky because of their history but they do it so often that eventually Bakugou and Midoriya start to chill out around each other and they even start to do weird quirk experiments when the others aren’t around. They don’t mention it to others and don’t talk to each other outside of quirk shenanigans but they’re on much better terms than before and are better heroes for it. They help each other and the rest of the bakusquad really flesh out their powers in ways that are useful for hero work and for daily life (and some ways that are not so useful.) Also they eventually get Todoroki in on it and get Todoroki, Bakugou, and Kaminari to try to cook different stuff with their quirks and see whose comes out the best. Seriously these are TEENAGERS living together in a dorm with SUPERPOWERS you can’t tell me these kids don’t get up to shenanigans Horikoshi.

Chapters: 1/1
Fandom: 僕のヒーローアカデミア | Boku no Hero Academia | My Hero Academia
Rating: Teen And Up Audiences
Warnings: No Archive Warnings Apply
Relationships: Ashido Mina & Bakugou Katsuki
Characters: Bakugou Katsuki, Ashido Mina
Additional Tags: Mina’s having a rough time, Bakugou is there to comfort her, they’re heroes in training but also they’re teenagers going through teenage problems, Bakusquad makes an appearance, the class might be planning a murder shh, Iida might be orchestrating it shhh, They’re totally not crammed in Shouji’s room with a giant whiteboard, as the bakusquad work on cheering up Mina, Aizawa is totally not there, shhhh, 1-A is 2-A
Series: Part 13 of Late night talks with Bakugou
Summary:

Mina was honestly just expecting to grab a tub of ice cream and hide away in her room.
Bakugou, of course, wouldn’t have that.

i wonder how much her neck will hurt in the morning 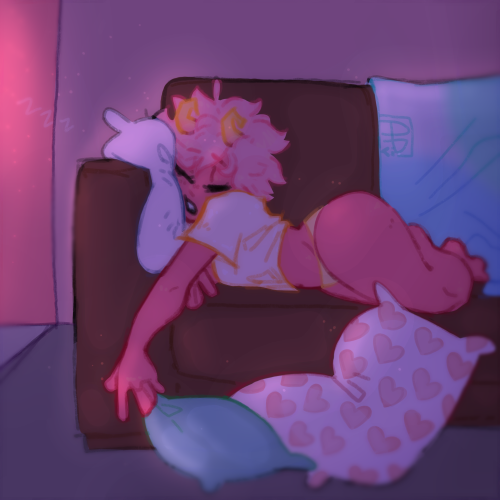 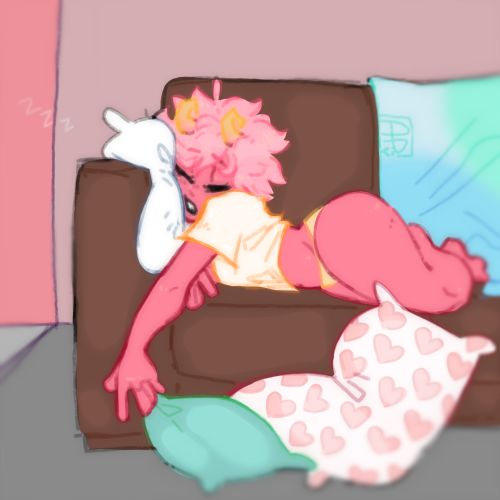 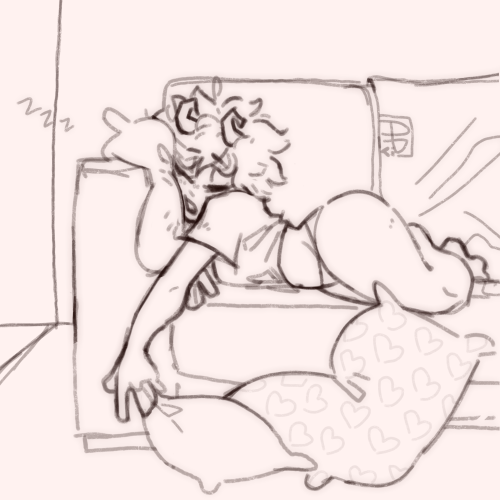 #bnha, #mina ashido, #ashido mina, #mine, #my art, #sleepy, #my entire mood during this quarantine, #she didn't even make it up to her room, #didnt even bother, #ok but she'd probably sleep anywhere if it meant getting some zzzs, #dont worry, #her neck doesn't hurt in the morning, #bc her friends take her to her room uwu, #also, #sad mood with those fluffy pillows on the floor, #bet she had them real cozyied up, #but fucking shoved them off in her sleep
226 notes · See All
crackhead-fiendsText

Aoyama: I tasted blood for some reason lol

Mina: Don’t tell nobody this shit but yo body actually full of that shit

and then she bit him and he shrieked 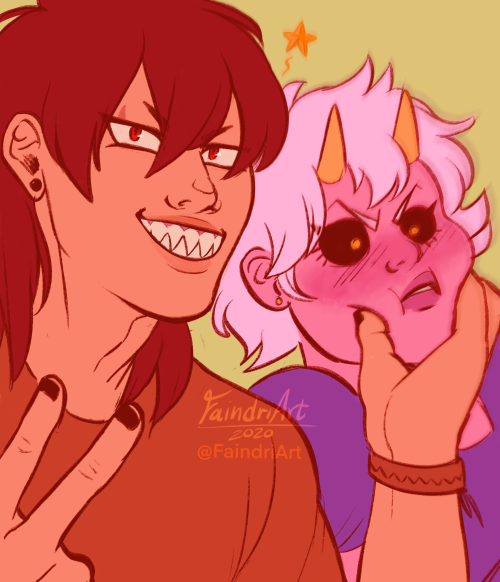 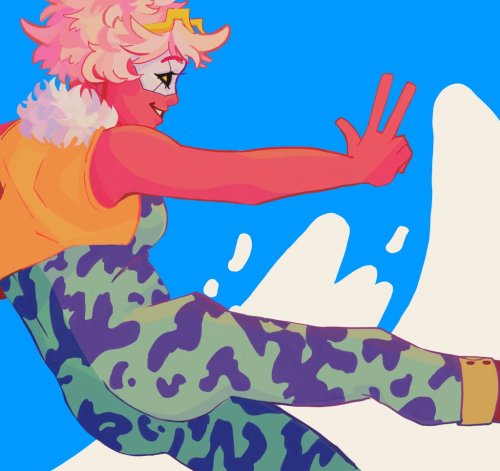 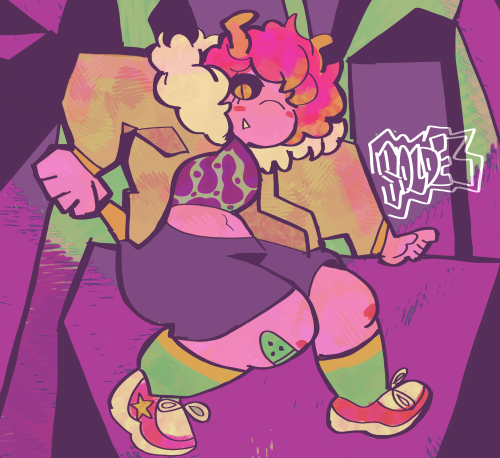 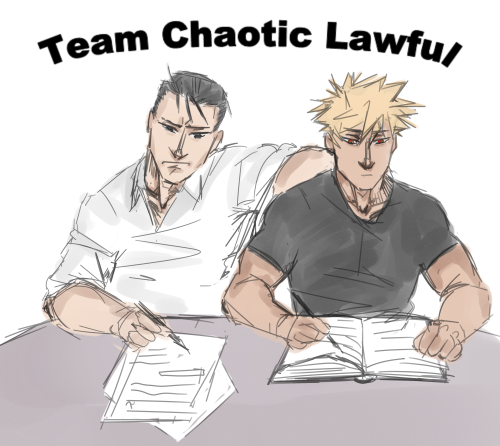 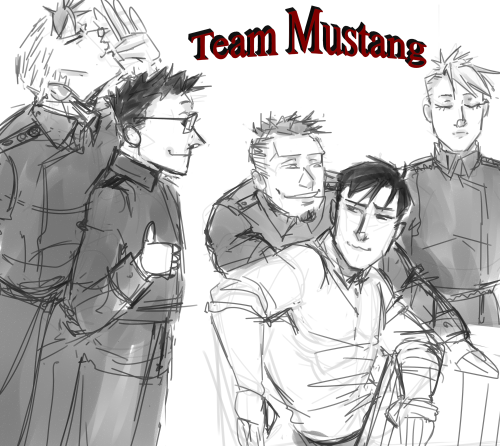 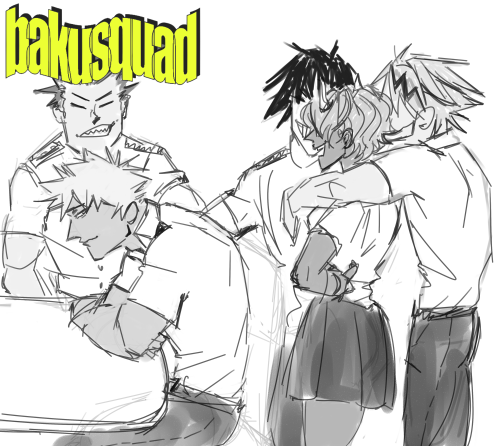 Mina thought letting Bakugo read whatever was in her folder wouldn’t be too bad. Maybe he would snipe at her for her less than perfect English translation and sentence structure, slap her on the head with the balled up assignment. What she wasn’t expecting was for him to charge with hellish fury towards her in the common room with all their friends to see.

One careless mistake leads to many things coming to light. Everyone walking away with something new to think about.

“What’s your problem then?”

“You wrote about my boyfriend fucking every other guy in the school ‘cept me!”

Mina scrolls through her phone, idly listening while Hanta and Denki trade jabs while playing their game. Hits and explosions backtrack their arguing, along with the occasional comment from Eijiro. The red-haired boy much more involved in who wins than Mina. More than anyone else in the common room, which seems to their entire class – save one.

He joins a few seconds later, storming over to where Mina sits on the couch. She hears the crackles of his explosions before seeing him, looking up when his shadow looms overview. “Hey,” she says, “what do you think you’re doing, Bomb Boy?”

“What the fuck is this?” He shakes the crushed papers in his fist, Mina surprised Katsuki hadn’t incinerated them in his anger. Seconds tick by, and his rage compounds at her silence. “Answer the fucking question, Raccoon Eyes –“

“Bakugo,” Tenya interrupts, sliding next to him, “while you may be angry, you have no right to use that tone on a fellow student – gah!” He flies a few feet away, not truly hurt. His shirt needs a healthy wash after Katsuki scorched it, but he left Tenya relatively unharmed.

A kindness Mina does not believe he will show her, give the terrifying gleam in his hazy red eyes. “It’s – it’s my homework,” she guesses, panicking, “I gave it to you, to review! Y’know. I didn’t think it was that bad…”

“Really?” he asks, waving the papers around, “So I guess Yamada’s really interested in our sex lives, huh? Do I need to take this to Nezu?”

Mina pales, her usually pink skin lightening to an almost human color. “What?” she gasps, “How do you… you can’t…” Suddenly, Mina remembers.

It was her turn. All the girls messaged her their month’s work, one after another. She dragged each file onto the same memory stick Mina saved her classwork on, tediously double and triple checking the folders to make sure nothing overlapped. Accidentally, Mina opened one of Momo’s documents. Glancing at the title, she found herself succumbing to curiosity and entertained herself with a preview. Only in doing so, Mina stole time from other duties. In a rush, she gathered her bag and left for the library. Printing her English assignment and all the stories in the empty computer room. Attention glued to the door, in case anyone stumbled in on her secret. Barely any time left if Mina wanted to arrive at class without earning Aizawa’s wrath, she crammed all the papers into her folder and ran. Forgetting all about the responsibility now that it was complete.

Until Bakugo showed up holding them all.

He knocked on her door, kicking it open. Mina glared at him from her desk, headphones in and textbook open. “What?”

“You wanted me to look at your work?”

She waved him closer, rifling for the folder and handing it over without bothering to open it. “Thanks!” Mina said, “you’re a life saver.”

the heavy scent of sweat and alcohol was enough to make anyone nauseous, along with the bright flashing colours of the spectrum reflecting off the white walls. loud and booming music was thankfully muffled by the plastered walls that surrounded you, hiding you from the crowd pressed together in the next room.

you had found shelter in your best friend’s room – kyoka jirou’s to be exact. mina ashido, a pink skinned girl who had took you under her wing as soon as you stepped inside, was also hiding in jirou’s room.

heart-shaped pink sunglasses sat atop her head, chipped around the edges from the abuse it had suffered in the past two hours. they rested comfortably on her golden horns acting as some type of pole to rest on, glimmering in the light as she giggled mischievously. glitter was resting under her black and golden eyes, contrasting with her coloured skin while she stared at you through long and thick eyelashes.

she suddenly blew you a kiss, winking at you before giving you a cheeky grin that could only remind you of a kid who was up to no good.

you cocked an eyebrow at her in response, earning a small giggle before she shuffled over to the edge of the bed to try and get closer to you. you held your breath at the close proximity, looking away as you tried to ignore the feelings swelling in your chest.

“you don’t look like you’re having much fun, y/n!” she feigned sadness, sighing softly as you just looked up at her. “cheer up, will ya? it’s a party! we’re supposed to have fun!”

on the outside, she

looks cool, but on the inside

she thinks of dank memes 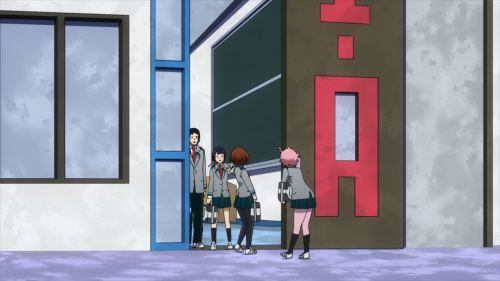 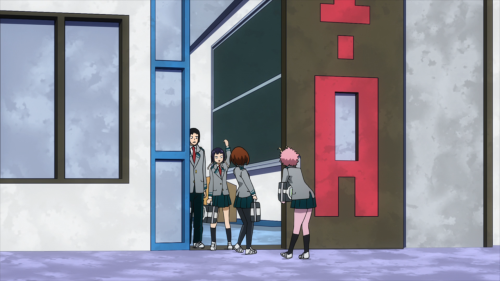 I really love these two (〃∀〃)ゞ 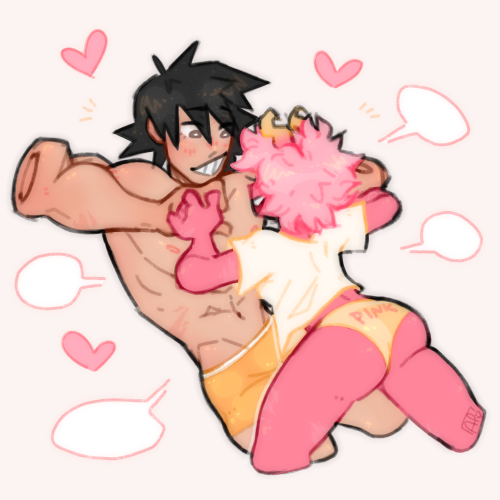 #bnha, #seromina, #sero hanta, #ashido mina, #mine, #my art, #tho tbh this started off with me just wanting to draw mina, #and then it turned into me just straight up drawing her ass, #and i was like okay lets actually make something of this, #so i put in my tall boy serooo
417 notes · See All
denkilightningText

reblog and put in tags who you ship mina with. this is purely for personal reasons. i also just happen to like knowing people’s opinions

These over dramatic dorks…

showing off her abs

took the reference from here:

As promised, here’s a bonus chapter for this week! Featuring Tsukauchi asking Ashido about her missing internet friend, Ashido lying about stupid stuff, and a cameo by character I’ve been VERY eager to show…

I hope everyone’s doing okay in quarantine! Please stay safe. And if you’re under a lot of stress, find something to distract yourself from the news and social media for a bit. There’s a ton of great anime to watch, plenty of fan fiction to read, and video games. I’ve spent probably 80% of my time this week playing Animal Crossing. Remember, your mental health is just as important as your physical health! It’s okay to disconnect from reality for a bit right now if it’s too much for you.

villain number 1: please identify the animal in this picture