I feel you, but you are allowed to have grief over a certain situation, even if you have a girlfriend. The world and what you have experienced does not stop once you‘re in a relationship. (And progress is not linear, past things come back up, so we can heal and that takes time and I bet your gf has experienced that too!)

But if you really don‘t want her finding what you have written down you could also write and then throw them away outside?

& whatever happened in the past is not what should define your relationship, because your relationship is what you two are building together now. But there is no shame in having to deal with pain from the past. It‘s good to be honest about it, mostly to yourself!

#I really hope this helped somehow?, #I wish I knew the answer to how to let go, #it‘s a lot of forgiving others & yourself and being compassionate I guess, #ask stuff
0 notes · See All
thefortuneturtleAnswer

Hmm writing usually brings me peace, maybe journaling can help you as well? My best friend once told me to just write without putting the pen down, it can literally be a mess, it doesn’t matter. That helped.

I just wrote down everything I wanted to tell them (what hurt me, how I hurt them, what I want them to know not even feelings but more like thoughts ect.) and with each letter it felt a bit different, as my perspective had changed. I’m really bad with expressing & allowing myself to feel my feelings as well, because I feel a lot and I think I’m scared of that, but you gotta start somewhere right

I used to tell myself that I don’t miss anyone. That’s not true and now I allow myself to miss them, even if it’s uncomfortable, I allow myself to feel guilty or angry or sad or whatever. Until it doesn’t hurt that much anymore, the emotions fade with time, and there’s nothing wrong with memories that stay. I am thankful for everyone I have met and even if we weren’t meant to be forever, that’s okay.

Letting go and allowing others to not be here is important, no one belongs to us and neither do we. You can wish them well and love them from afar too! It does hurt (we’re human, we have feelings) there is nothing wrong with that but if we don’t allow change, we become stuck in caging feelings. Have compassion for whatever you’re feeling, but allow yourself to be free.

Also if you haven’t got closure, find ways to find that within yourself. I used to write them letters (without sending them). I haven’t gotten the chance to apologize properly once, and that haunted me for a while… until I realized that I was being selfish (again) it haunted me bc. I didn’t want my idea of me being a “good person” to not be true. So yeah, a lot of this has to do with ourselves more so than with the other person not being here.

Sending you much love!

P.S. missing people is a natural response, it means they are/were important to you; but there is probably a reason why you aren’t close anymore.

AAGGSBSBXNJDJS THANK YOU SO MUCH LOVE 😭💕💕💕 Alsoooo yesssss absolutely! Hugo needs some love :’)

(the top text -the part that would said “Anonymus said:- is in other language ‘cuz I’m from Brazil :P)

I’m from Chara-Protect-Squad and suport the NarraChara theory, so if you don’t agree, there’s no need for an argument, since each fan has their owns opinions on that matter and I’ve been pulled into far more Chara-is-evilXChara-isn’t-evil fights than I wanted to. Hope it didn’t offend anyone. 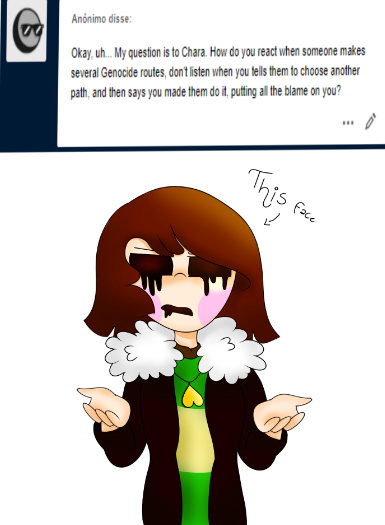 Needless to say Mugman is my favorite Cuphead character at this point, huh? But truuust me, being on Cloud’s favorite list may mean more attention of my part, but it also means that if something bad happens, is most likely to happen to y-

I mean, I hope you liked and please check out my blog and send your questions!! 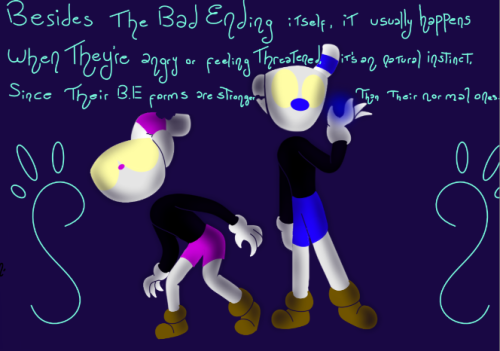 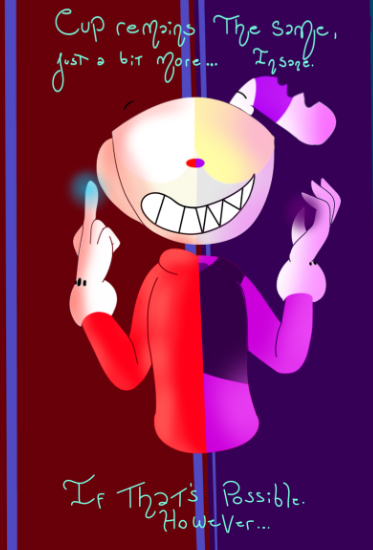 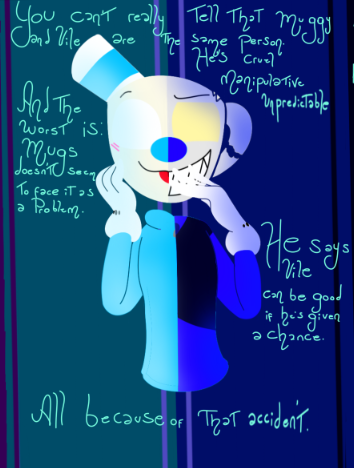 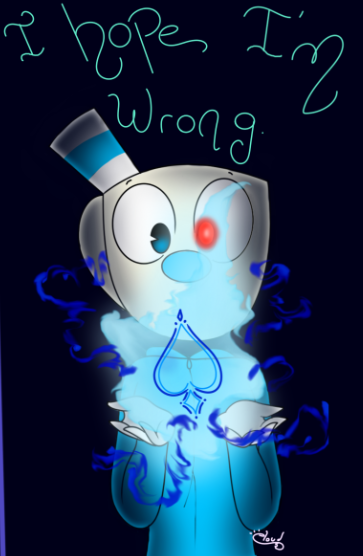 Yep, on this one we have a good look at the Mun (Aka Cloud- Le Me-also, I named it before I discovered that there was a edgy male game character named Cloud too -oops-, so, it’s not realated, if you’re wondering), Remembering it is an Wreck-It-Ralph style of  thing, that is, all of them are aware they’re game characters and interact with each other. Welp! Please don’t forget to check out my blog! Pleaseeeeeeeee!!!!! 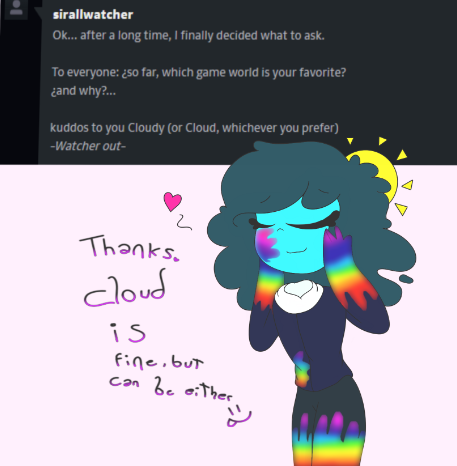 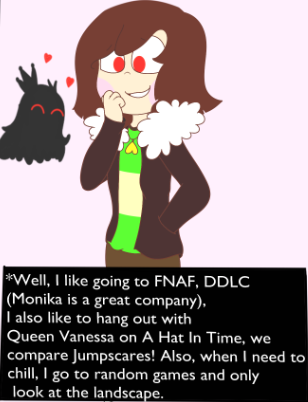 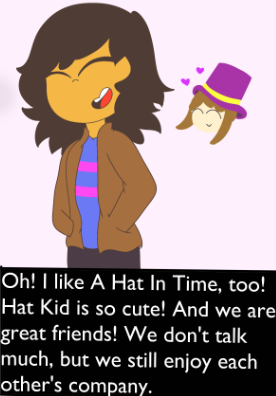 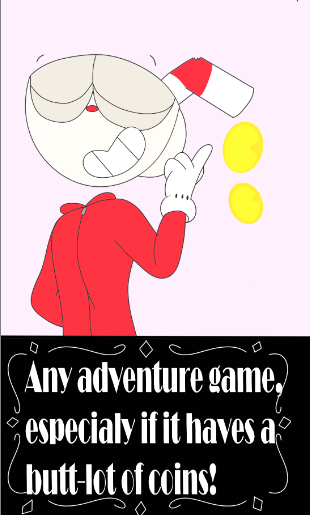 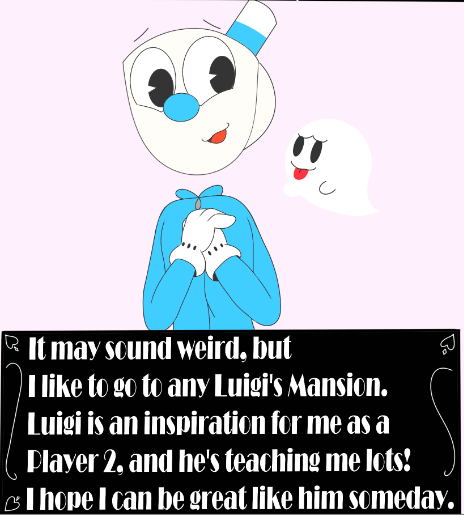 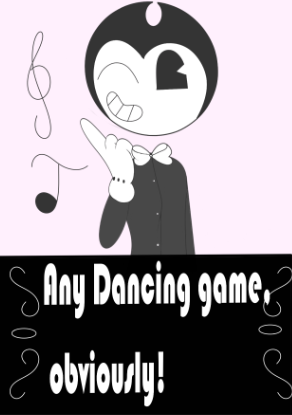 Halloween request! The scariest stuff I’ve ever did (I’m not into scary stuff). Anyways, plase check out my blog!! 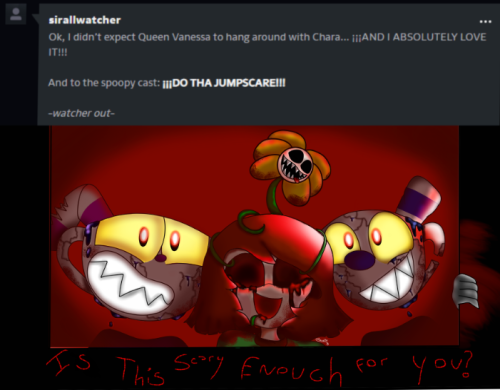 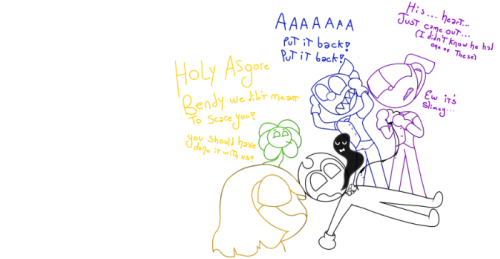 Heya!!! There’s an cute halloween draw I’ve made,I think I’ll use it as profile for a bit!  Anyways, ghost-muggy here is part of another AU I’m making, called “Beyond Saving AU”, (not accepting questions for that one tho, I’’m still developing it), wich is a very sad one, so if you wanna cry your eyes out, here’s the sketch:

Beyond Saving AU:
At some point after the events of the game and the DLC, an accident happens and takes Mugman’s life away. Cuphead, that was there when it happend, gets completely devastaded, since his younger’s brother’s last moments were him pulling his shirt and begging to do something and crying, saying he didn’t wanted to go, but he couldn’t do anything to help since help was too far and parry wasn’t an option on that especific situation. He carries his brother’s body back to their house, were he’s received by a shocked Elder Kettle. All Inkwell falls in grief for the loss on one of it’s heroes, and, refusing to bury him, Cup and Kettle makes a small sanctuary (Snow White style) on the forest behind their home (since Mug’s body is made of porcelain, it wouldn’t decay). At the first weeks, Cuphead visits his brother evryday, since dawn until sleeptime, getting out just to get food(that he barely eats) and etc. , until Chalice (who was also sad but trying to move on) said that it wasn’t healty and he would end up crazy if he only drowned on grief and guilt. So he decides to take a break of one week before coming back. When he does, he gets the surprise of the ghost of his brother floating above his body. “You finally came! I was worried you didn’t want to see me again!” Mugman tries to hug him, but Cuphead backs away, certain it was an hallucination and he had gone crazy. He runs back home, but Mugs follows him, sure that he had done something bad and wanting to make it up for it. Weeks passes and Cup falls ill, as he was refusing to eat or sleep, since he would have nightmares. Mug tries to help but one day, still thinking it was all in his head, Cup bursts of anger and shout that he want him to dissapear and that he never want to see him again. Oblivious of his brother’s frail mental state, Mugs thinks he did something really bad and, broken-hearded, he leaves, believing it would be the best. Without the “hallucinations”, Cups’ health begins to get better, until Chalice reveals that actualy everybody could see Mugs’ ghost and he was being a butt to his brother all along (her words). This obviously makes him feel even more guilty and he runs off to find him, but the lack of food and sleep made him so weak that he faints out of tiredness. Luckyly, He colapsed near to where Mugs had been staying, and the ghostie found him. Worried, he takes him to his new “home” (one of Legendary Chalice’s mausoleums), promising to take care of him until he wakes up.

BOY THAT WAS HUGE
I stopped there  but I’m thinking in some way to revive Mugs, so…
Anyways, I hope you liked, don’t forget to check my askblog!
Bu-bye!! 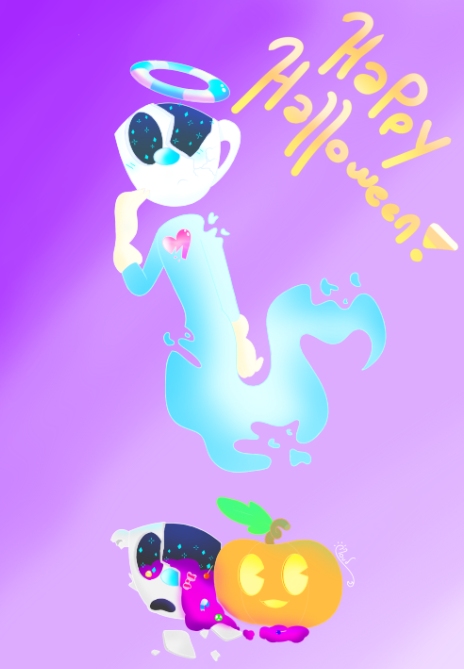 Hello Hellooo!!! There’s another question answered! And don’t worry, this isn’t nothing at all…heh,heh… 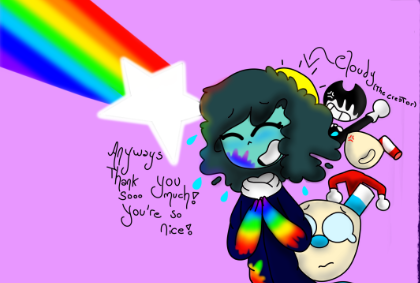 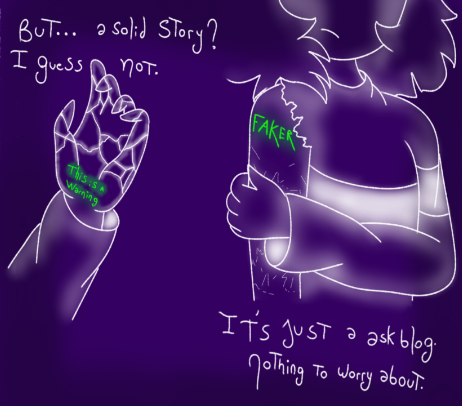 Another one! Isn’t the best I’ve done since it was made in such a hurry, but my latter works are a bit better. Anyways, PLEASE guys and girls, send yous questions pleaseeee!!!!!! 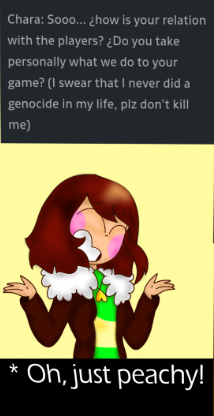 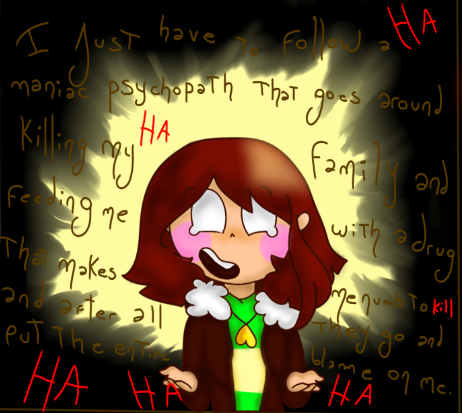 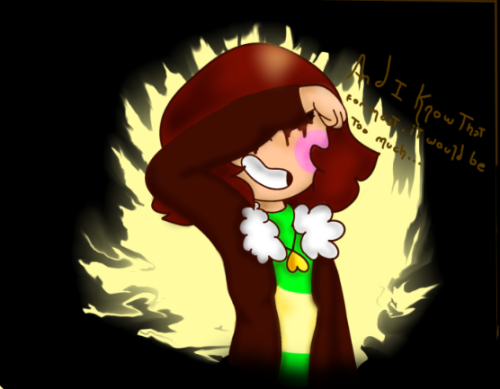 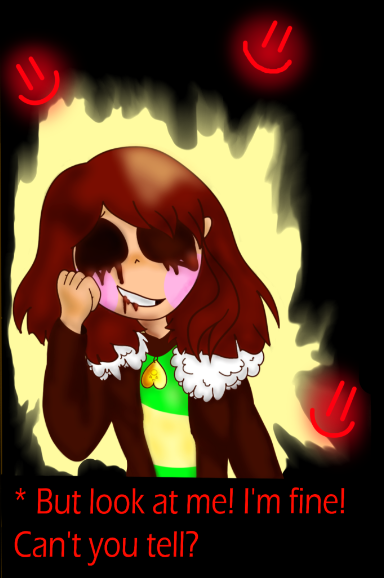 OKAAAAAAY first answer posted here! It was previously posted on Deviantart, is bit older so the style is a bit different, I was still searching for a style I was comfortable with, but now I found one ;3 Please, go check my askblog! Isn’t so big yet but I’m trying to improve. Please, PLEASE send your questions! 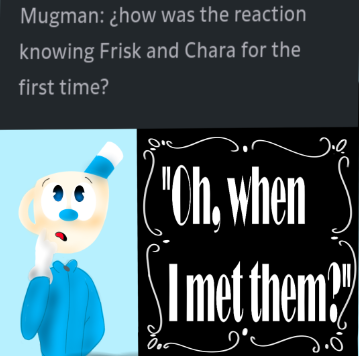 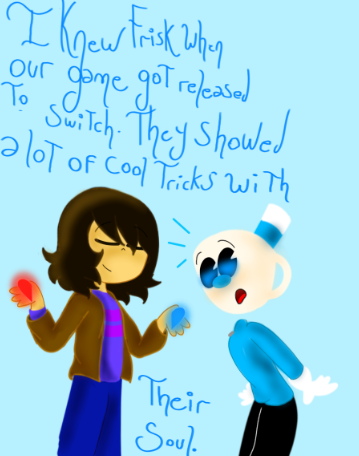 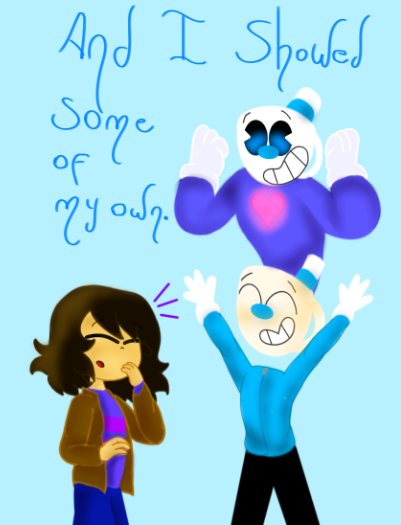 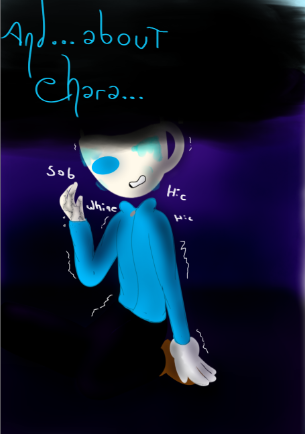 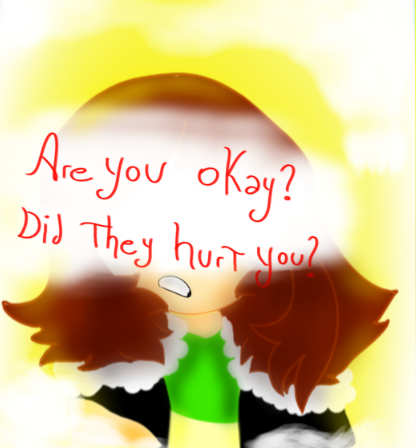 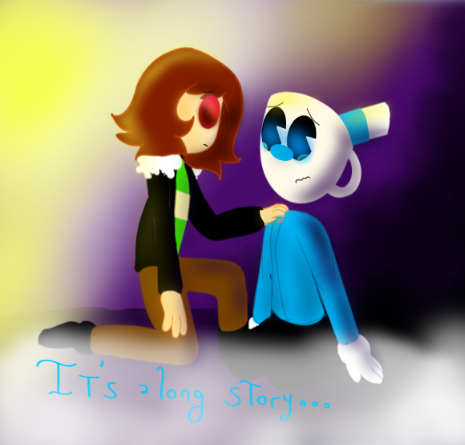 Strawberry!! Its sweet, classic and a pretty pink color 💕

Briar is a fan of many gems, but Rose Quartz is her top fav. It’s a pretty pink color, it represents love, and is a classic gemstone!!

Ooohh ok probably pink drink!!! Its sweet and milky but has some fresh strawberries n such.

26: Favorite way to celebrate their birthday 🎂

All she really needs is her close friends/partners!

Hello hello! Welcome :) 😊💕 absolutely love (I don’t know much about Quebec but I will try my best 👌😤) thanks for all the love 😁❤

#The struggle is real😂, #It's funny I talked about not being able to find any Les Mis friends on tumblr with my partner literally only an hour before it happened, #Ask stuff
4 notes · See All
filippoinzaghiText

Rules: Post the last sentence you wrote and tag as many people as there are words.

So this is from a fic for Kingdom, a netflix original korean drama about zombies in the Joseon era. If you haven’t seen, I can only urge you to see it, it’s so good and very short, the cast is amazing! The story focuses on my favourite character, Cho Beom-pal, who, in my very honest opinion, has the best character development in the whole show. This takes place just before the final scenes of the last episode of season 2 so six years after most of the events but just a year before the final scenes.

“And then, they met the Fool.” He finished in a murmur. “He was a magistrate but he knew nothing.” He added, no tenderness whatsoever towards his past self.

I’m tagging @blindbatalex and I think my other fanfic friends have been tagged but if you haven’t then take this as me tagging you!

100%! There’s nothing boring about stability.

Go ask @questioningmyexistence24 shit plz and thank. The beast needs to be entertained