When yo reading kagakuro, fluff and/or smut, then you quick-read Tetsuya as Tatsuya, and you’re like “WTF?” and you scroll back just to triple check if you read correctly..

Aight lemme get this right for you

Tatsuya is for Atsushi or whoever

Now, all I see when I’m searching for fanfics, they’re completed about 5 years ago. And as for the unfinished ones, they last updated 4-8 years ago and the authors seems to have forgot about them and I’m pissed as fvck.

Where in the hell could I read anymore more works about this shtt? I think Imma cri… ;-; ;-;

#knbgraphics, #sportsanimedaily, #kuroko no basket, #kuroko no basuke, #murasakibara atsushi, #knb, #atsushi murasakibara, #mine, #mine: knb, #mine: gifs, #request, #ngl i'm pretty happy with the result, #i hope you like it <33
333 notes · See All
macademicsAnswer
The Macademy live again! I must welcome back my favorites! *give Bakugou thumbs up, gives Gumdrop scritches, pats Midoriya's fluffy head, smiles to Iida, waves at Todoroki, dabs at All Might, holds up heart hands to the Gen. of Miracles, salutes Levi Ackerman, even pats Jeff's bowl cut*

Izuku Midoriya: *Flushes a shade of red* “Th-thanks.” “Its good to be back!”

Tenya Iida: *Blows whistle* “Character limit, asker has breached character summon limit!!” “I must give you a ticket for violation of the blog rules.” “But i shall also give you a welcome embrace so that my punishment doesn’t hit as hard.” *Gives you a hug, and a ticket* “Eri kindly drew the tickets I’m handing out today, please keep it as not to insult her work.”

Katsuki Bakugou: “You bunch of dorks.”

Atsushi Murasakibara: *Pats your head* “I am here to say hi to you in behalf of the rest of kiseki no sedai, got any snacks for me or am i wasting my time?

#ask a character a question, #Izuku Midoriya, #Tenya Iida, #Katsuki Bakugou, #Atsushi Murasakibara, #Levi Ackerman, #onliafaze, #Admin Kari, #Lia out here being a rebel and catching all types of penalties, #lmao, #Thanks for the welcome back, #we're happy to be back
7 notes · See All
torasj15Photo 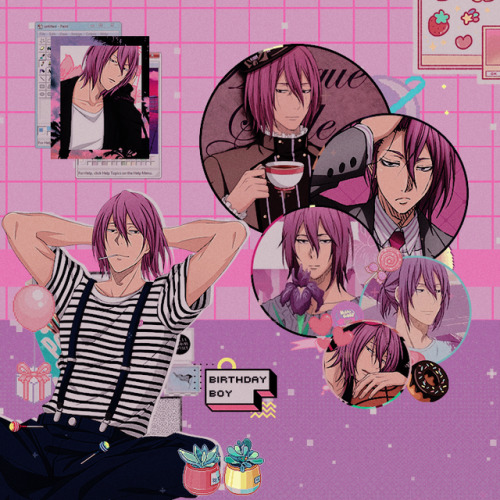 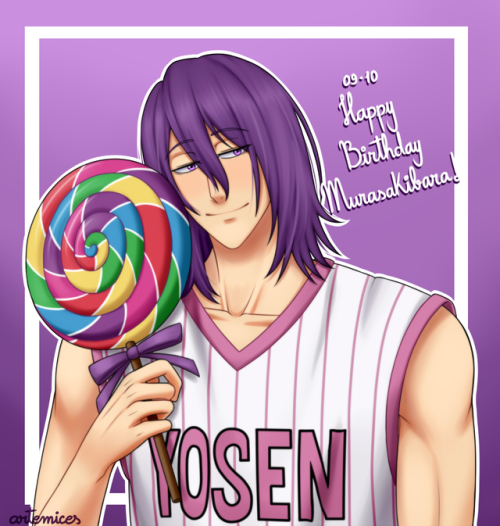 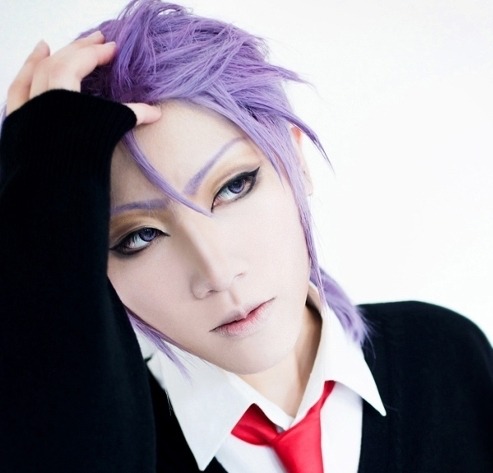 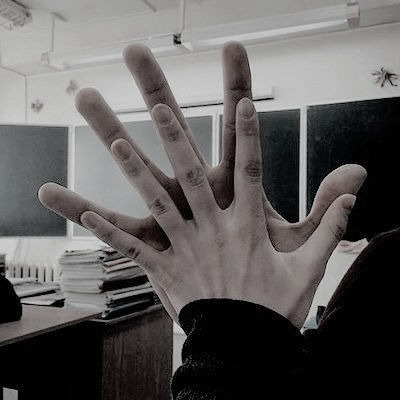 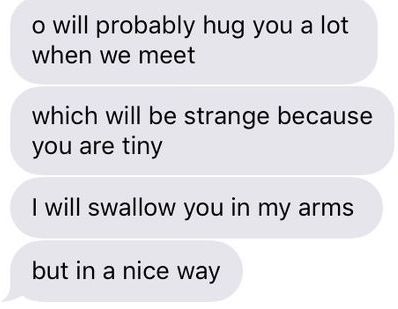 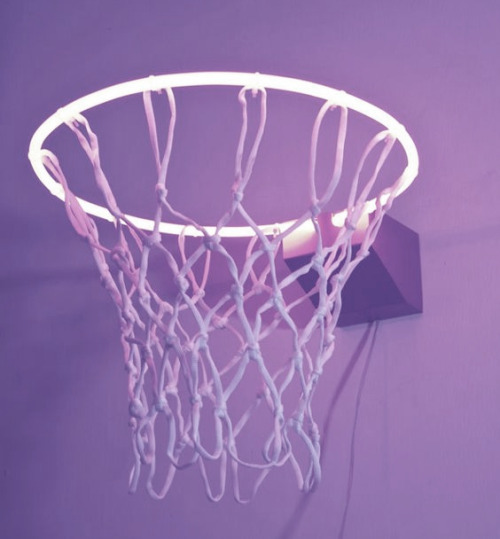 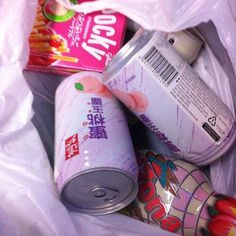 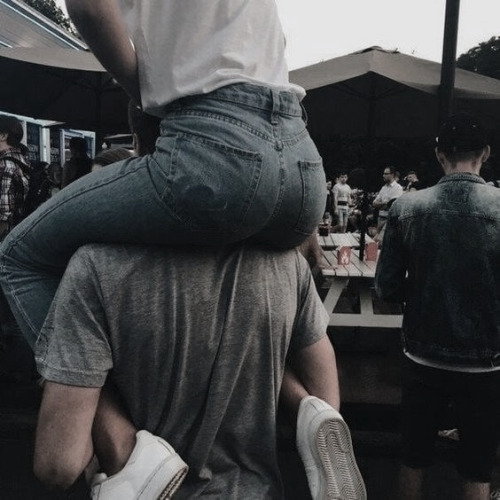 Murasakibara yawned on the other end of the phone. “I have something to do that weekend.”

Kagami knew full well that he had nothing to do that weekend. He also knew that if Kuroko asked, their friend would come. But the joint bachelor party was meant to be a surprise for his fiance, so he couldn’t exactly enlist Kuroko’s help.

“I will buy you all the drinks and candy that you want if you come,” Kagami said, groaning internally as he said it. It took a ridiculous amount of alcohol to get the giant drunk. But if that was the price he had to pay, he had NBA money to back him up.

He could hear Murasakibara consider on the other side of the phone. “Hmmmmmm…. I’m not sure it’s going to be worth it. I can get drinks and candy here.”

“Free drinks and candy, though?”

“Are you calling me broke?”

“No, no, see I just thought that…” Kagami sighed.

“I’ll think about it,” Murasakibara said.

It was time for the nuclear option. Kagami pressed to add a call and dialed up his brother.

“Murochin!” Murasakibara’s voice lit up, which was rich considered the two were probably just in different rooms of the same house.

“Taiga. Atsushi. What gives me the pleasure?”

“Can you please tell your boyfriend that he’s coming to me and Kuroko’s bachelor party?”

“I’m going to be there,” Himuro said, voice wheedling.

They literally lived together. He could survive a night or two without his boyfriend. There was no chance he was going to take the bait. Except…

“Yes!!!!” Kagami pumped a fist in the air. “That’s everyone! Kuroko is going to be so surprised!”

“He was planning on coming all along, you know,” Himuro said. “He thinks it’s funny when you get flustered.”

“I feel like I take precedent, considering he’s my lover and all.”

Kagami sighed. “Love you too, Tatsuya.”

Fem!GoM protraits I did over summer-break to practice something completely. These took crazy long to make, but I kinda dig ‘em. 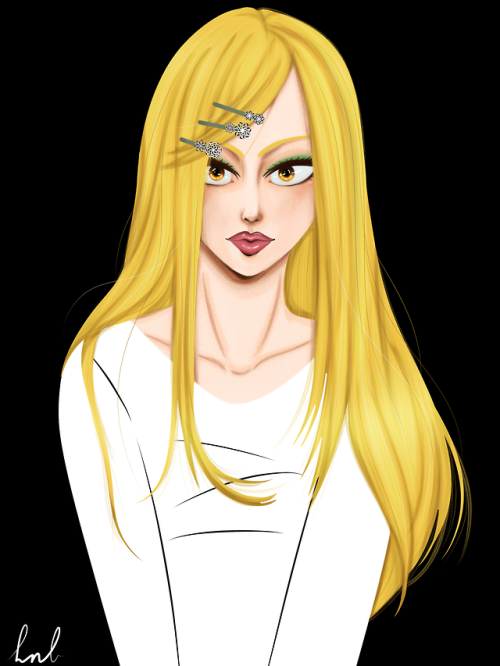 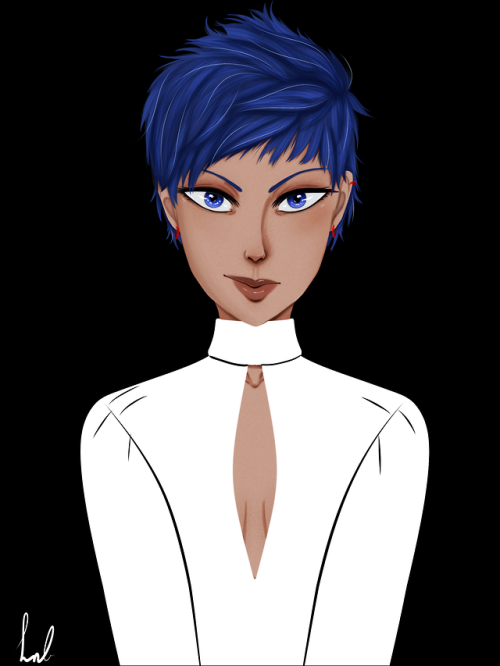 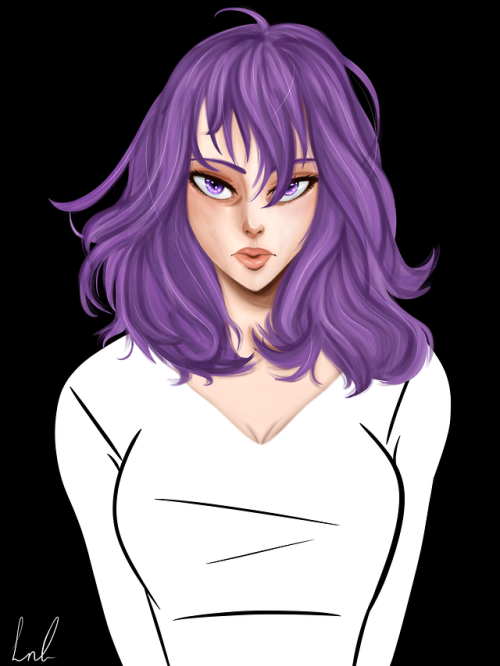 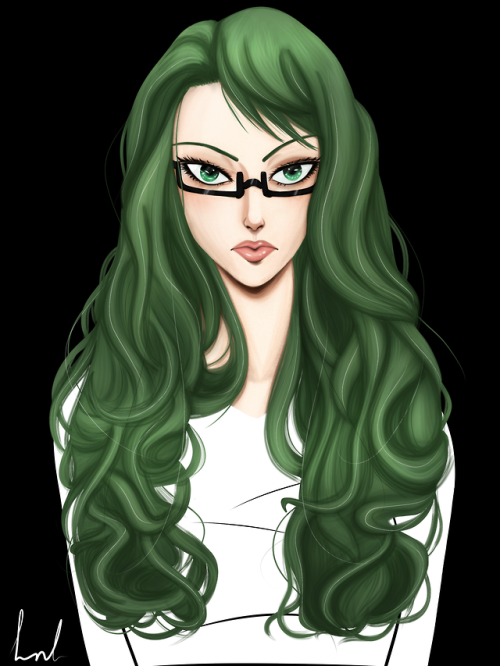 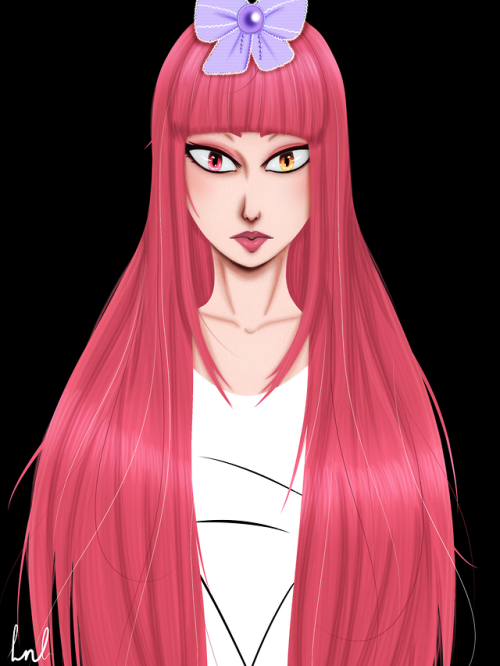 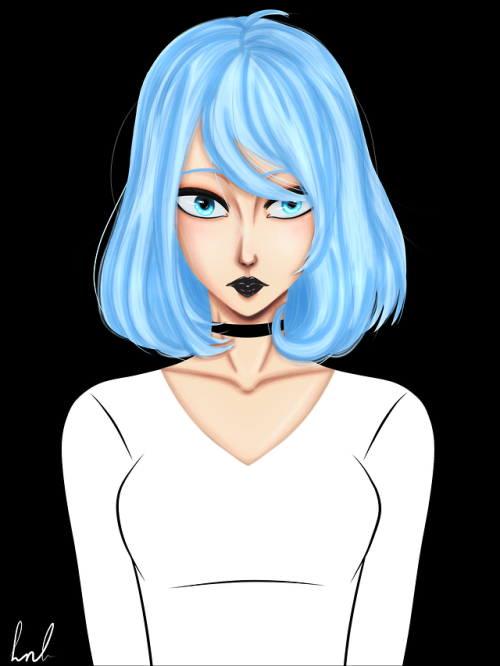 Atsushi Murasakibara Figure by MegaHouse, from Kuroko no Basket 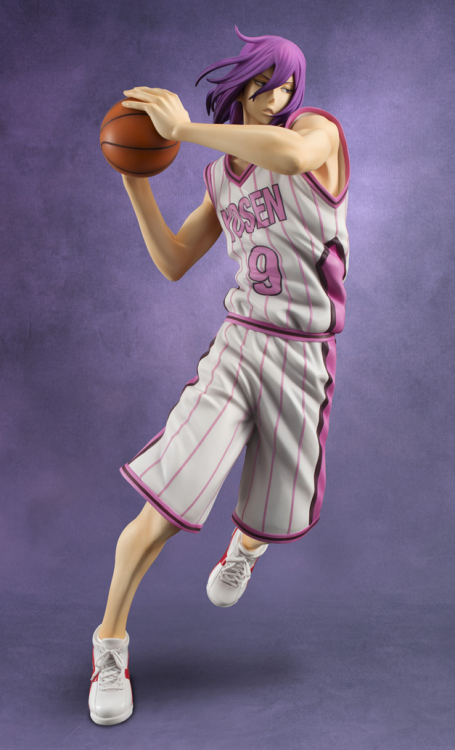 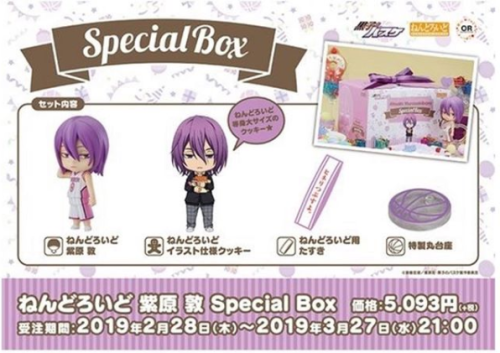 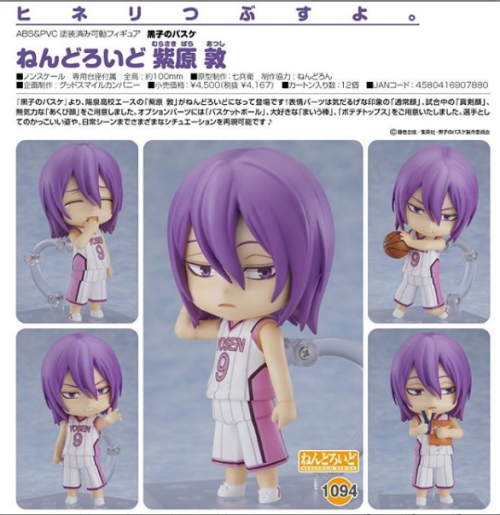 I’m so sorry that it took so long to get this out!

Also, I live in south Texas, so I have no idea what snow is like haha. So forgive me if this is really simple/vague.  I hope you enjoy it otherwise! Thank you for requesting.  ♡

“Atsu, we are not going to run out of snacks.”

You couldn’t help but roll your eyes, smiling at the sight of your (honestly oversized) boyfriend rummaging through the cupboards, taking a mental inventory of the snacks and sweets that you had remaining.

It was day two of being snowed in, and despite going grocery shopping the day before the snowpocalypse began, Atsushi still fretted over the possibility of running out of food.

And though you knew that he was sort of kidding, at the rate that Atsushi ate, he was probably right.

He allowed his head to fall in defeat, letting out a deep sigh.

Snorting, you got up from your seat on the couch and walked into the kitchen where he stood. You wrapped your arms as much as you could around his waist, snuggling your face against the muscles of his back. You rubbed his stomach and his hands fell to cover over yours.

You always envied how warm Atsushi was, and despite wearing the warmest set of pajamas you could find in his drawers and the fuzziest pair of socks you could buy, you could still feel the cool air that sank to your ankles from outside.

“I’m not,” you finally responded.

“So we’re going to starve.”

He said with such a straight face and voice, as if it were a matter of fact. You laughed against his back at what he thought to be the problem of the century.

“You know I’m a growing boy, [f/n]~chin,” He paused, looking over his shoulder at you with a slight smirk. “I need food to grow healthily.”

“You don’t need to grow any more, Atsushi,” you laughed as you moved with him, his arms stretching to glance into another cabinet. “You could eat the vegetables that we bought earlier this week. We have plenty of those.”

He audibly gagged at the suggestion, shuddering lightly at the thought of eating something remotely healthy.

You rolled your eyes, knowing that he couldn’t see. ”If anything, we can always bake something instead?”

You felt him perk up instantly at your suggestion, and letting go of your hands, he turned around to face you. He opened his mouth to agree but was interrupted by your placing a finger against his lips.

“But first, I need you to cuddle me.” You smiled at the slight furrow of his eyebrows. “I’m freezing, and as payment for baking later, I require cuddles.”

His face softened at your explanation, smiling lightly as you leaned against him, your chin against his chest as you looked up at him. “I think that’s a fair trade off.”

He leaned his head down to yours, catching your lips in a gentle kiss as he rested his hands on your hips.

So I always imagined, since I’m 5ft4, that the one beneath Murasakibara would just like… cling to him like a Koala Bear as he moved his hips… ^~^;

Same with him picking you up, I imagine you just clinging to him like a koala bear and maybe bouncing with him. He’s clumsy so I also imagine that if he pinned you to the wall he might accidentally pin you too hard at first and you’ll be left with a bruise.

Ooooh I also imagine that Murasakibara is huge down there!!!

Like Mura is definitely going to stretch you!!! Hehehe maybe even be big enough to make your stomach bulge a little *blushes deeply* eh heh *fans my face*

Ahhh our tall childish bean :3 such a hottie!!! Murasakibara we love you!!!

Quick art-thingy to celebrate the birthday of my precious 6'10 son, Murasakibara Atsushi!!! I wish him all the food in the world.

See the #knb on my blog for more art of the rainbow boys!