Ok but that’s so cute!!! I decided to try something different. Thank you for requesting! ❤️💜❤️

You were hesitant at first, you didn’t know how to tell your always so angry brother who you’re dating, and it wasn’t easier to try and figure out how to tell your boyfriend who you’re related to. They knew each other, you always hear them complain about the other and talking things, but you never revealed the truth. But you can’t hide something so important from the people you love the most, so today is the day you’ll finally tell them!

You first thought about telling your ever so furious brother, Katsuki. Most people would be surprised to find out that you to are siblings. While he’s the perfect copy of your mother, from looks to personality, you on the other hand you were more like the father, soft and warm, you never met you anger take control of your actions, well most of the time. There’s just moments where your inner Mistsuki comes out and you’re just terrifying to deal with. But that’s not what’s important right now. Standing in front of his bedroom door, hesitant to come in, but you knew you had to do it sooner or later. Taking a deep breath, you barged into his room, he was ready to yell at you, but you shut him up when you said that you have something important to tell him. Scoffing a bit, but turning to look at you with bored out eyes.

- “Ok katsu, I know that it’s weird, and you probably didn’t expect that, but before I tell you, just know that I’m super happy and yo-

-Ok so Todoroki Shoto is my boyfriend.”

Silence surrounded the room as Katsuki kept looking at you like you’re the craziest person he ever met. You could see from his eyes that he’s trying to process everything you just had said, trying to understand if he’s having a dream, well more like nightmare, or what just happened is real. “Are you serious, why him out of all people y/n?” He’d ask so quietly that you almost didn’t understand, but when you finally did, you plopped yourself on his bed and started talking about how great Shoto is. Though your brother was having none of it, pushing you out of his bed and kicking you straight out of his bedroom.

After you’ve told your brother about it, it’s time to tell Shoto. You weren’t as nervous, you knew he loves you no matter what. He hasn’t said it yet, but his actions were enough to prove it. Meeting him at your special place, you greeted him with a hug and soft smile, which he returned with no hesitation. The more you look at him, the more you doubt your plan. You’re sure he won’t be repulsed by it, he won’t leave you because of it, but… But what if he did. Sensing your eased state, he nudge you a little bit, a way to ask you what was going on. “Um, listen Sho, I know I should have told you sooner, but I didn’t have the courage. So…. Um, you know bakugou katsuki? Yeah well…. He’s my brother.” Blinking at you a few times before he just chuckled. That’s definitely not the reaction you were expecting, but you’re not complaining. Then he turned to look at you and he hit you with a question you’re so used to. “Are you sure though? You’re so nice, kind, soft, adorable, pretty, intelligent, oh I could go on and on about how amazing you are, but Baku- well katsuki, he’s so… Not!” Now it’s your time to chuckle amd laugh, so used to this question, yet the way he phrased it made your heart beat a bit faster as your cheeks became a light pink.

While at first Bakugou tried to fight Todoroki for “stealing” his little sister away from him, the two grew closer to the point where you had no idea if Shoto comes to visit you or your brother. And the worse of it all, is when they team up to make fun of you. Now you kinda wish you never told them because they’re just so mean! But in all seriousness, you’re so glad that the two young men are getting along.

If bakugo was a stand up comedian he would be Dane Cook for sure.

I never liked orange… now I see that colour differently 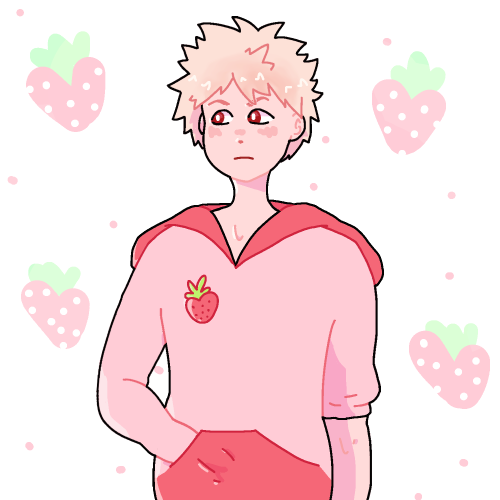 #boku no hero acadamia, #bnha, #mha, #my hero acadamia, #bakuguo, #bakugou katsuki, #bakubro, #LMAO I DONT KNOW WHAT ELSE TO TAG, #my art, #look i KNOW hes not actually strawberry blonde but, #hes blonde, #and its strawberry themed, #SO ITS FINE, #also do me a favor and just don't look at the strawberries in the back, #i might add something to this 😳😳
1 notes · See All
tanjiro-monjiroText

Kirishima: you know you can’t solve every problem by yelling

(A/N In this oneshot your quirk is called Botany which means you can make any plant (real or imaginary) grow anywhere. If you know of a magic plant in a book series that can heal people you can make it in real life and it still has those magical abilities. You are also best friends with Kirishima and Todoroki)

“Katsuki!’ You whine reaching your arms up trying to grab your phone from his grasp.

“Give it back!” You jump while cursing the height difference between the two of you. After trying for a while (and failing miserably) you stop trying to get your phone from the ash blonde boy in front of you and jut your lip into a pout while crossing your arms over your chest. He rolls his eyes and places your phone in the pocket of your hoodie. You beam up at him as a thanks.

“Whatever.” He grumbles with a scowl that didn’t reach his eyes.

“Thank you Katsuki.” You smile your biggest smile up at him and walk back to class with him still scowling.

“Have you asked out Bakubro yet?” He asks rather loudly

You glance around to see if he was heard by the hot tempered boy, “Kiri you can’t just say stuff like that out loud. He doesn’t even like me.” You whisper and cover his mouth to stop him from saying anything else you didn’t particularly want anyone else knowing.

“He likes you (Y/N) he’s just too oblivious to ask you out first.” Kirishima tries to nudge you towards him and you wrap some vines around your ankle to keep you from moving.

“EVERYONE GET IN YOUR SEATS!” Iida shouts drawing everyone’s attention to him. You use that as an excuse to get away from the red headed boy and sit at your desk. Mr. Aizawa walks into the classroom and begins to start his class.

When class is over you pack up all your stuff and walk out of the classroom with Todoroki towards the cafeteria and get some bubble tea.

“Maybe this weekend your dad will let you skip training with him and say that you’re training with me.” You suggest to Todoroki while sipping on your bubble tea.

“HEY! (Y/N)!” You hear someone shout from above you both. You look up to see Bakugo looking down at you from his balcony. You barely notice Todoroki continue to walk into the dorms.

“LISTEN HERE YOU LITTLE SHIT. I HAVE FEELINGS FOR YOU AND ITS ABOUT TIME YOU ACKNOWLEDGED THEM!!” He shouts down at you

“You tell her Bakugo!” You hear Kirishima shout from his dorm. You blush and pull yourself up towards his balcony with some grape wines. When you reach his balcony you grip the front of his shirt and pull his lips to yours. After a few seconds of kissing you pull away and hear some slow clapping. You both look to the side and see Kirishima on the balcony looking at the two of you. Your face turns a bright shade of red and Bakugo pulls you into his room.

THAT DUDE JUST REGEW HIS FUCKING ARM OOOOH MY GOD

I did sick Bakugo. It started out as angst but then I fell totally in love with the idea of Bakubro berating his immune system when he gets sick so now it’s just kinda funny

#inktober 2019, #frail, #bakugo, #bakubro, #kacchan, #katsuki bakugo fanart, #sick bakugo, #bakugo berares his immune system when he's sick, #don't yell at me
4 notes · See All
strawberryandspiceandchocolateAnswer
His prototype was very similar in design to Bakugou, the main difference was that he was aggressively nice to everyone

oh yes, I remember now~ you know, I’m an idiot to not have gotten that~ oof~ but it’s an interesting idea~ maybe I can incorporate that in somehow? maybe?

I have some concrete ideas already about his personality, so we’ll see how things turn out~

#twink bakugo, #bakubro, #I like my bakugo the way he is, #strawberryspice
16 notes · See All
strawberryandspiceandchocolateAnswer
What if his twin was just his prototype-

#twink bakugo, #bakubro, #chat
9 notes · See All
strawberryandspiceandchocolateAnswer
I just want the Baku Twins to fuck me 😔 give me that good double penetration (pun intended) AND THEN CUDDLES AFTER ヽ( ͡° ͜ʖ ͡°)ﾉ though imagine if Katsukis twin is more of a little shit in bed AND in public? They try to one up eachother every. single. time.