Why don’t many people talk about this cool asf Bakudeku super move in Heroes Rising??

working on some new bkdk art, because it’s been too long 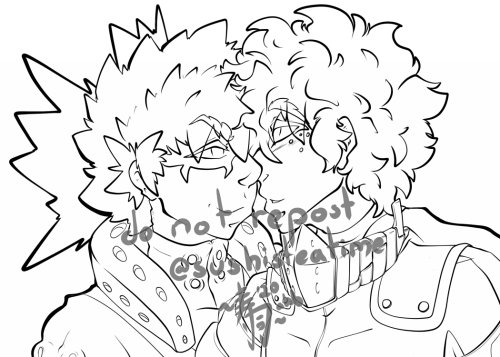 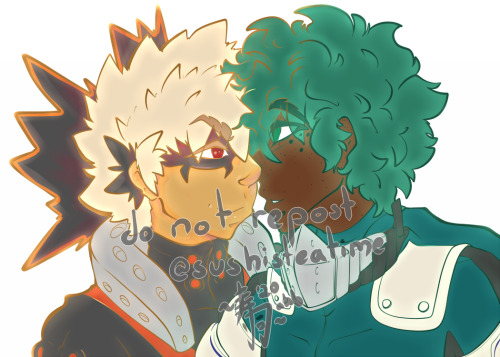 bakugou : I’ve got 99 problems and sacrificing my life for my best rival without a second thought is not one of them

Happy (belated) Birthday to you, Ash!! I had loads of fun drawing this one! (except that gremlin over Katsuki’s shoulder, they were a little shit fjsjsjshakkl)

I’m running on an hour of sleep, all I want is to go back to bed bUT FUcKiNg Ao3 HaS THe AuDaCiTy tO ExIsT aNd FuCk uP mY nEeD FoR ReST

So um, i wrote a probably really bad bakudeku fic and uuh,, here it is

Its got major character death and world end scenario so uh

What if quirks emerged because there was a nuclear war in space or something and the quirks are only the side effects of the nuclear radiation.

“I should just go back to my room,” Izuku sighed, turning around to head back to the front of the room when his eyes landed on Katsuki.

His boyfriend wore a pair of tight black pants, a ripped white shirt and a green jacket over it. A pair of fake wolf ears sat on the top of his head but needless to say he looked amazing. And he had spotted Izuku.

No running away now.

Red eyes widened as he took in what Izuku wore and he made long strides to get to him quickly, mouth gaped open a bit.

“Deku…what the…why….Are you messing with me?” he growled softly, pulling Izuku off of the dance floor.

“I’m not!” he said quickly to him. “I lost my costume and this was the only thing that Uruaka had for me to borrow. Do you hate? You hate it don’t you. I should go back and train or something. I shouldn’t have come-”

He was quickly cut off as Katsuki tugged him closer and kissed his lips.

“You’re not going anywhere,” he whispered against his mouth. Before Izuku could register what was going on Katsuki was tugging him towards the bathrooms.

Want to read more? Become a Precious Reader on my patreon and gain access!

want to support? my patreon and kofi (both triforceangel) 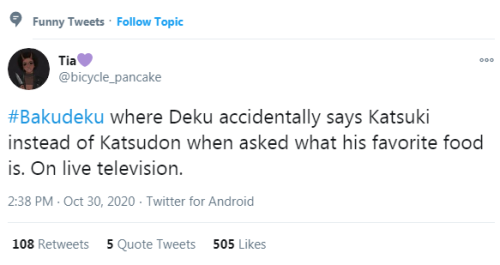 #i am rolling, #this will be hella hilarious, #and everyone wont stop teasing him, #XD, #deku, #bakudeku, #bnha, #tweet
175 notes · See All
did-they-say-thatText

Deku: My boyfriend is too tall for me to kiss him on the lips. What should I do?

Ochako: Punch him in the stomach. When he doubles over in pain, kiss him.

Tsuyu: Kick him in the shin

Bakugou: ALL YOU HAVE TO ASK ME IS TO BEND DOWN YOU BASTARDS

Nomu!Neta’s Halloween costume 😆 someone requested I dress him up as a slice of bread.

I read so much fan fic and most describe deku as like dumpy or plain and have Katsuki teach him to dress better or force him into better looking clothes. But like Deku doesn’t dress that way cuz he has no sense of fashion. He dresses that way cuz he has a single parent (basically) and low self esteem. This boi has notebooks filled with every stat of every superhero… he definitely has sections on costumes and different eras and trends. Honestly adult deku once he becomes more comfortable and self assured will have the fashion sense of a k pop idol and Katsuki will not know how to handle cute deku bein hot. Meanwhile Katsuki will probably be rockin the same alt 2000s idc about my image I where combat boot to every function look.

Fingers tipped his head forward ever so gently, having him look down at the other, as the rough pads of his hands grazed against his jawline and cheek. The tingle of a breath could be felt along the tip of his nose and his lips, and the scent coming from him filled his lungs with the smell of rainwater. He felt absolutely intoxicated, but yet, even with his eyes only inches from his own, he felt less distance between them as he was standing across the room.

He guessed that’s how things were though. It was only recently that he could even come to understand this growing feeling and the way that it made him need to have the others presence against him. Before he was satisfied with their distance, while now it only made him ache with want. Whether it was only from the desire from needing to have him against himself, he wasn’t sure, but for now, he didn’t care to figure it out as he was already so close to getting whatever he wanted. His eyes were looking at him now, too close, too blurry from being so close that he could only make out their color.

Something so uncommon, yet, what was truly rare was the delicate way the shape of his eyes held that color, the changes in expression causing them to shine or darken, to show his innocence or conceal it. Right now, the way that they were looking at him was much too vulnerable for what they should be.

Shit, he really shouldn’t be allowed to have any of this in the first place.

Hello everyone! I’ve decided to take the time and document my first real attempt at writing a long, fully finished fanfiction. I had actually written that above piece of writing with no clue who it would be about and decided to run with it, though I don’t think it fits horribly with the characterization. Anyway, I don’t really believe my writing to be good, but that’s what I’m here for in the first place!

This is planned out to be just a whole long slowburn, so with that in mind, the excerpt above has really nothing to do with the story right now, other than being a piece of inspiration.

Disclaimer, I actually don’t ship these two in canon, - though it’s to each their own-, rather, I think they need to plainly just work on a healthy friendship, but the possibilities for their dynamic is something that I do find to be fun to mess around with. I really wanted to start getting this going after the latest chapters of the manga though, where you can really start seeing some healing being done between them.

Current plans for the story is to place them in the beginning of the second year, after everything has played out in the current situation of the manga, and let them grow from there. I guess you can say that I’m just writing what I feel like I want to happen, but also adding the whole romance thing for the story.

The genre is going to be more angst directed, with plenty of fluff though as well. No, nothing not age appropriate will be happening. These guys are still literal minors with them only being 17, and I don’t plan on doing anything else once they turn 18 either.

That’s the basic rundown of things. I don’t expect anyone to interact or see this but it is what it is. I’m first and foremost doing this for the documentation process and for fun, and will be posting kinda semi-regularly from here on out. I do want to receive constructive critism and correction on grammar etc.

I’ll be using this account for whatever else I feel like though, it being haikyuu, naruto, or just shitposting in general.

That’s about all i can really think of to say for now though, so bye!

“Together against adversity, are you ready? ”

—If the lost fruit is the most coveted by man, who when he seeks and finds it, consumes his soul just by touching it, then why want it so much to the point of doing the impossible for achieve it?

This Fanart does not belong to me, credits to its original author whose source I leave below, supporting his works and magnificent work:

#bakudeku, #bnha, #katsudeku, #midoriya izuku, #boku no hero academia, #mha, #my hero academia, #bkdk, #bakugou katsuki, #deku, #wonder duo, #dekubaku, #dekukatsu, #kacchan, #dekuba, #one for all, #all for one, #plus ultra
128 notes · See All
wafflelf-woovesLink
Out of This World - Wafflelf_Woof - 僕のヒーローアカデミア | Boku no Hero Academia | My Hero Academia [Archive of Our Own]https://archiveofourown.org/works/27227191

Hey hey hey. I’ve decided to post like incorrect quotes about this universe on my blog so I’ll just leave this here. I guess at least check it out please? I- eh, guess I dont fully know what I’m doing because it’s my first fic but it’d be nice.

#bnha, #bnha fanfiction, #if I'm refing it on my tumblr I'm posting this, #Bakudeku, #bakugou x izuku, #mha, #fanfic, #i have an unhealthy obsession, #bakugou katsuki, #midoriya izuku, #my hero academia, #boku no hero au, #fanfic wip, #it's an alien fic but it's not smutty, #I just had a sudden thought of alien Izuku and decided to write it
1 notes · See All
baku-bombshellPhoto 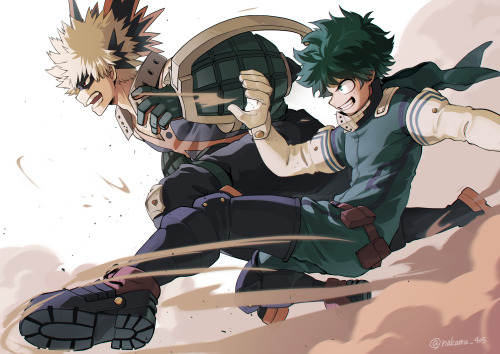 Kinda messy but! I thought the idea was cute :^))

Song: Be Around Me - Will Joseph cook

#bnha, #mha, #boku no hero academia, #my hero academia, #bakudeku, #katsudeku, #bkdk, #ktdk, #dkbk, #did you know i actually thought of making this way before the episode of kacchan getting kidnapped aired?, #my gif, #my edit, #bnha;edit, #and now i wanted to add this for the kacchan rising manga chapter?? except i didnt want to wait that long ;;
154 notes · See All
tsukuwiText

Sugoi! Kacchan is making his pumpkin look just like me! Wait.. put down the knife!