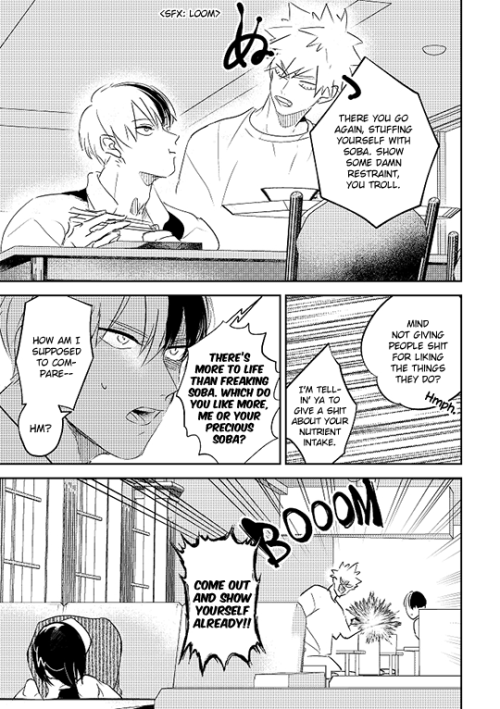 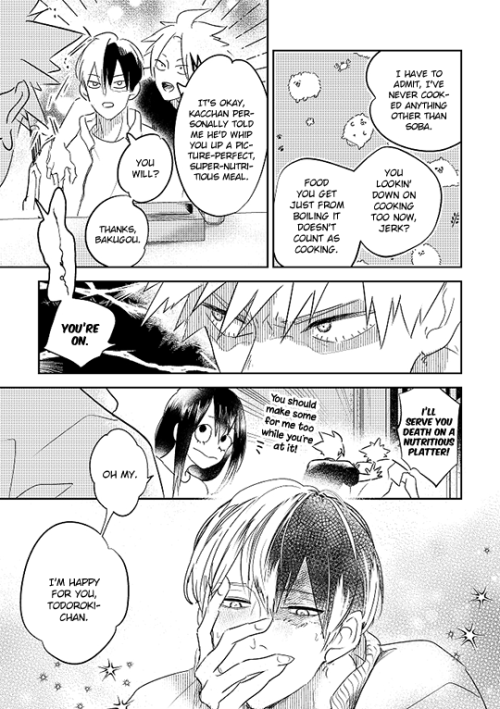 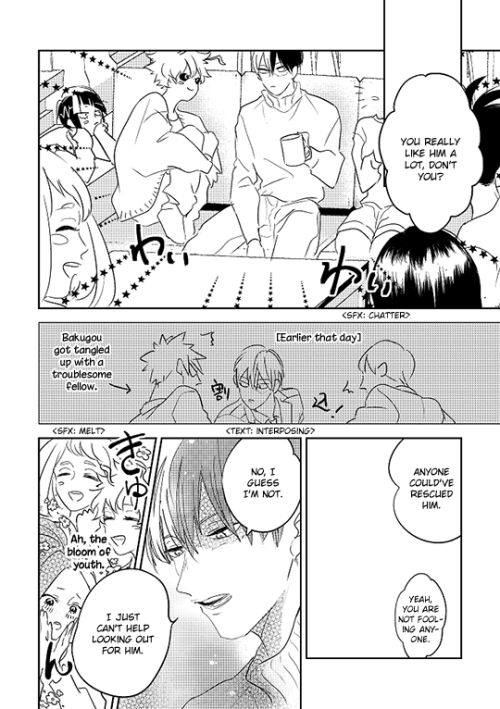 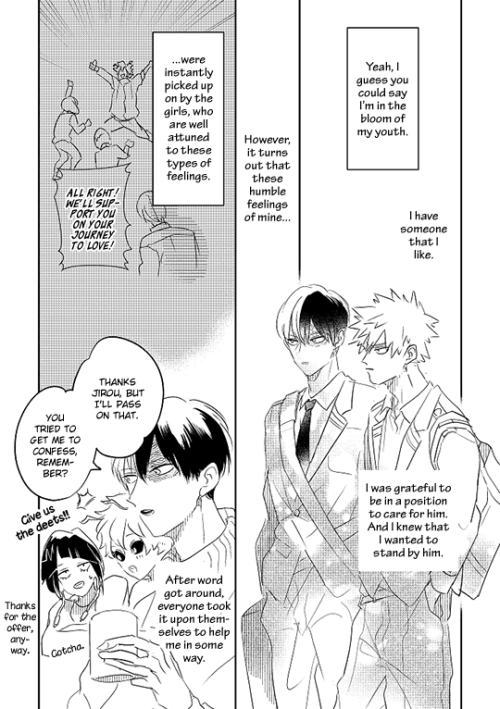 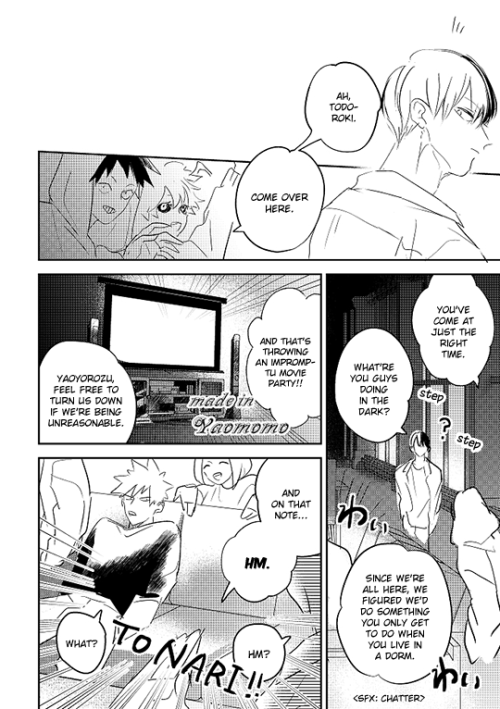 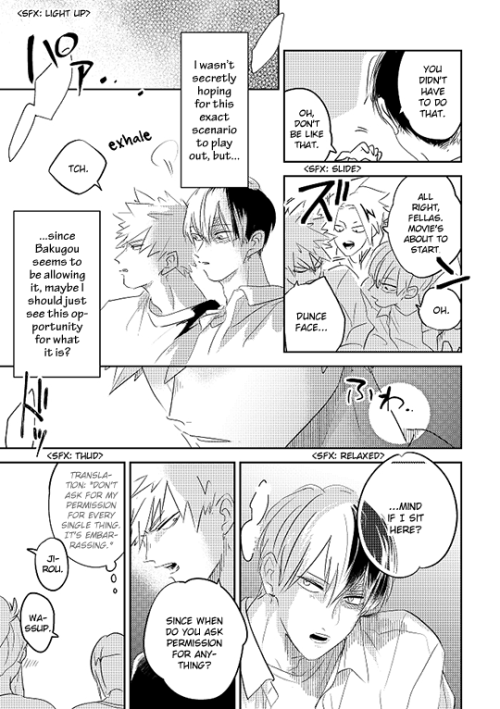 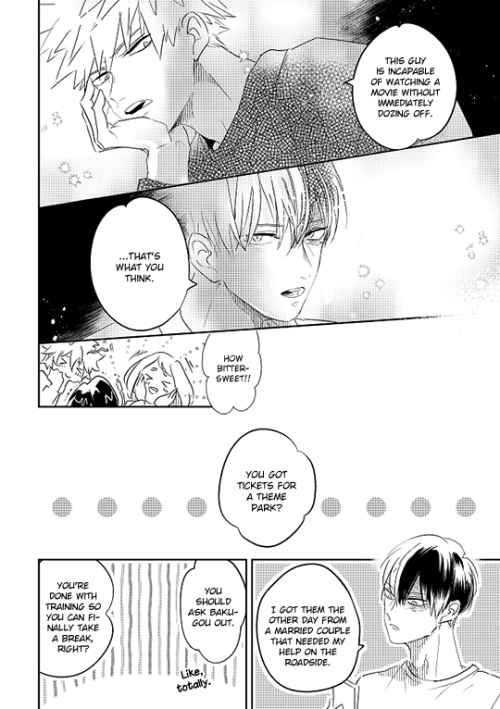 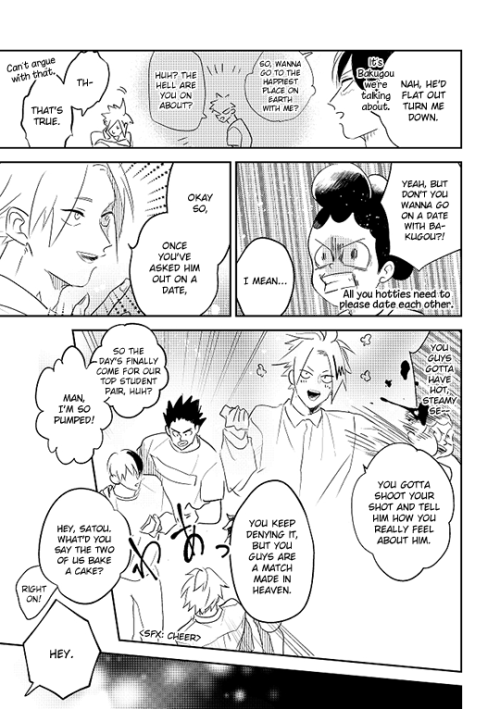 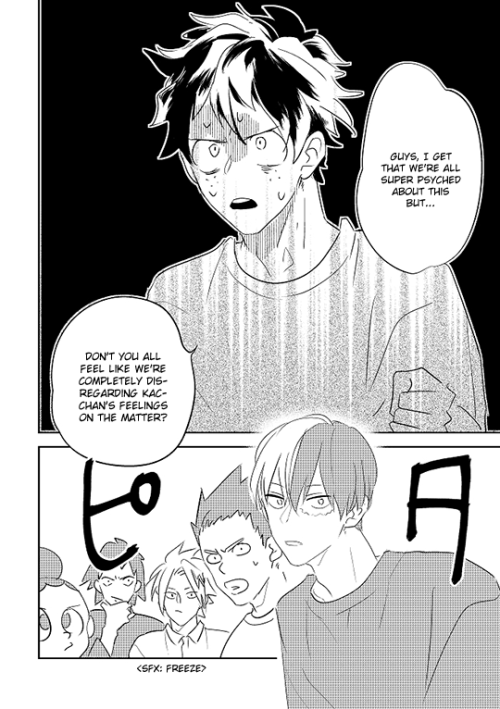 (?) Soulmate au, where someone dyes their hair and their soulmate’s hair color changes to the same color.

(A/N) Omg round some inspiration so take this short story. Also apologies for any misspells, I type really fast and my eyes get letters mixed up pFF. It was a little rushed. Oh and autocorrect sucks sometimes.

(Warning?) Slight NSFW? But they don’t actually do anything really bad.

“Guys?” Kaminari called as the rest of the bakusquad looked at him, stopping whatever they were doing in Sero’s room. “Yeah?” Kirishima said as Kaminari proceeded to hold his phone up about a foot away from his face, studying his hair.

“My hair color is getting old” he stated as he turned around to look at the others. Mina who was sitting on Sero’s bed then got up and walked over to Kirishima with black nail polish in her left hand. “No it’s not, it matches you perfectly sweetie!” Mina says taking ahold of Kiri’s right hand as she sat down in front of him.

“Yeah but, I wanna try something new” he says walking over to Sero’s bed. “Maybe I could do like—-red?” Kaminari began to say before looking at Kirishima, “nah that wouldn’t match me” he says before sitting down. Kaminari looked at Sero; black wouldn’t be a good hair color on him either. Kaminari sighed as he slouched against the wall behind the bed.

Tsu? No, green definitely wouldn’t suit him. Plus, who said it had to be permanent? He looked over at Bakugou, who was sitting beside Sero on the floor. “Nah” he said out loud as he then looked up at the ceiling, Bakugou’s hair color wouldn’t match him either. Picking a hair color was hard. He looked back down and looked at Mina, who was painting Kiri’s nails. “PINK!” He says excitedly as he sat up quickly and pointed at Mina’s hair.

“Well yeah, that’s my skin tone. We knew that” Mina said laughing as she looked behind her at Kaminari. “No! Your hair” he says smiling, “the fuck are you-“ Bakugou was then interrupted by a smiling Kaminari looking at him and yelling, “IM GONNA DYE MY HAIR PINK!!” He says brightly as Mina giggles.

“Are you sure Kami?” Sero asks looking at his friend as Bakugou raised an eyebrow. Kaminari nodded, “I’m sure!” He says. Bakugou closed his eyes and tried to imagine his friend with pink hair. It would be an odd change. But to be honest…Bakugou definitely wouldn’t mind it.

“Alright! I’m dying my hair pink! What do you think Bakugou?!” Kaminari says looking back at him, Bakugou opened his eyes and looked away. “Do whatever the fuck you want” he mumbles as Kaminari nods. Bakugou was a little caught off guard by the question, why ask him?

“I’ll go buy dye in the morning! Mina I’m gonna need you to help me” Mina nods at Kaminari before turning around and finishing Kiri’s nails.

“I love it Mina!!” Kaminari says walking out of the bathroom with his now dryed, pink hair. He smiles, “I’m happy you avoided the bolt though” he laughs nervously. “Of course! I’m great at these things” she says while leaning against a wall.

“Thank you!” He says enthusiastically as he began to walk off, “No problem! I can’t hang out with the rest today! It’s girl’s day!” Mina calls out as he nods. He then walked around the dorm area. Getting questions from anyone that was out there.

Midoriya looked extra surprised, Kaminari didn’t know why. A reasonable well…reason would be that he chose pink.

Bakugou proceeded to walk along the hall of dorms, wanting to get back to his own so he could take a bunch of pictures with his hair. He was in love with it. He couldn’t get over that he actually did it.

Kaminari stopped once he heard soft sparks as he raised en eyebrow confused. “KAMINARI!!!” He heard and angry voice ring out, Kaminari gulped. “Oh no” he said to himself as he turned around to Bakugou running towards him. Kaminari closed his eyes, not nocticing anything new and balled his fist as he waited for Bakugou to get to him.

Once he heard two last footsteps approach him, he opened his left eye slightly. He looked at Bakugou, then saw a strand of pink over the other’s eye. He was confused and opened his eyes fully. “Oh my g-“ “THE FUCK HAVE YOU DONE?” Bakugou yelled at Kaminari began to laugh.

The..hair color. He didn’t even think about that. Bakugou’s hair was the same as his! There’s no way someone pranked Bakugou and dyed his hair at the same time, Kirishima went to his dorm before anybody else! Kaminari was the last to leave out of the group.

“You-“ Kaminari began to say as pink flushed over his cheeks. Bakugou realized what was actually going on. He was so pissed off he didn’teven realize that…his soulmate was his..crush. His dumbass crush.

“Bakugou. Do you actually-“ Kaminari looked down at the ground nervously as he messed with his own white shirt. “Do you like me?” Kaminari said as he worried. Do all soulmates like each other back? Couldn’t you have a soulmate but not like them?-

“Yes sparky!!” He says as Bakugou lifts Kaminari’s chin up. Kaminari was surprised as he looked at the other. “I do” Bakugou says softly as Kaminari’s breath hitched as their faces were so close.

Kaminari looked into Bakugou’s red eyes, as if he was mezmorized. Not wanting the moment to leave..

They slowly leaned in as each other’s eyes closed, letting the moment flow through.

Bakugou’s lips touched the other’s softly, as Bakugou’s arms wrapped around the smaller’s waist. Kaminari wrapped his arms around Bakugou’s neck gently. Then leaned in closer as their lips collided lovingly.

Though, they both let go. Gasping for air as they looked into each other’s eyes as Kaminari let his hand back down to the other’s neck. “You know, you’re a great kisser” Kaminari says with a soft laugh, “Tch. Of course I am. Who do you take me for?” Bakugou says smirking at Kaminari. “Well for someone who has never done this before-“ “who said I hadn’t?” Bakugou says raising an eyebrow. “You haven’t actually have you?-“ “no” Bakugou replies, followed by Kaminari giggling.

Crossed off: Dancing in the Kitchen

A/N: I may or may not have cried writing this that is besides the point. I want bakugou forehead kisses ): but I hope that you guys enjoy this piece I did for the @bnhabookclub​ bingo event! Also may have loosely based this off the song Ghost of You by 5sos

You were always the more cheerful one of the two. Katsuki knew this from the first time he met you and was one of things he loved you for. The way you were able to light up a room with just the sound of your voice, and how you were the only one who could cheer him up after a long day at work.

He treasured how you always found a way to put him first in everything you did. Waking up with him to join him for a cup of coffee before he left for work. Making sure that his plate of food was always warm when he got home. Massaging his shoulders and arms as you two cuddle on the couch watching movies. Over the 6 years you had been together he still managed to find new ways to love you.

Izuku has a brother that pulls him from the darkness and guides him to the starting line, as well as changes a few things along the way. 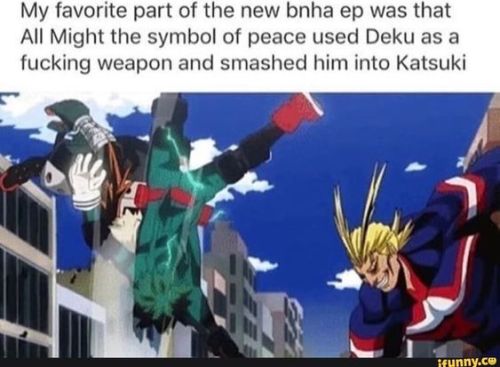 Nedzu was quite proud of his work. Humans so often were foolish, naive creatures and were simple-minded. However, the legal systems in place took a bit of workaround to overcome. Sadly, he has become quite disappointed in the ‘smooth sailing’ he’s experienced after the founding of UA Hospital for the Mentally Disturbed. Honestly, it was quite sad how strict and unwilling to accept change society was. Over the years, more and more people, mostly seen in children though teens more-so than adults, began to believe they had superpowers. This trend was no sign of mental instability, but rather an opening to a new age. Society, however, rejected that change and hid away these children with outstanding potential in mental wards.
…
Full Summary in notes. AO3 decided to be mean to us.

Nedzu was quite proud of his work. Humans so often were foolish, naive creatures and were simple-minded. However, the legal systems in place took a bit of workaround to overcome. Sadly, he has become quite disappointed in the ‘smooth sailing’ he’s experienced after the founding of UA Hospital for the Mentally Disturbed. Honestly, it was quite sad how strict and unwilling to accept change society was. Over the years, more and more people, mostly seen in children though teens more-so than adults, began to believe they had superpowers. This trend was no sign of mental instability, but rather an opening to a new age. Society, however, rejected that change and hid away these children with outstanding potential in mental wards.
…
Full Summary in notes. AO3 decided to be mean to us. 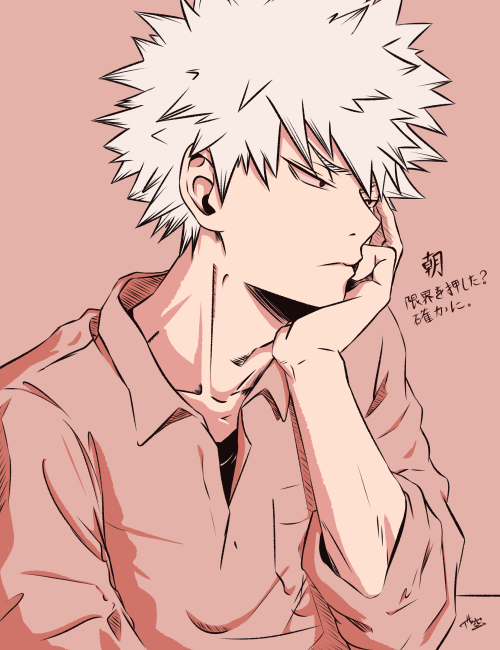 God, as soon as I saw the original image and the suggestion to redraw it in your own style, I had such a bright image in my head that I just couldn’t pass it by.

After a suffering with perspective and pose, I finally came to this result! 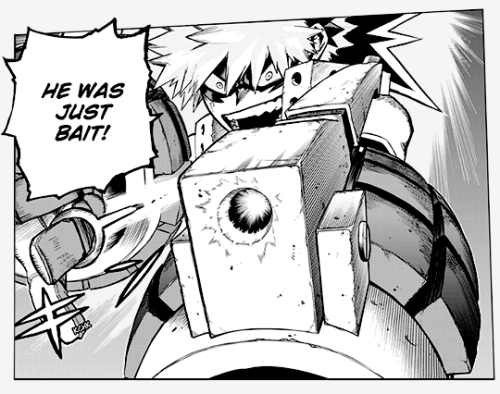 Kaminari: Yo, is that weed?

Mina: I think it is.

Bakugou: You idiots, that a four leaf fucking clover.

*Soulmate Au, where when one person dyes their hair, the other’s hair color changes too*

Bakugou: Sure, do whatever.

Bakugou: SPARKY WHAT THE FUC-

#this is probably so confusing, #i need this in a small fanfic tho, #bakukami, #kamibaku, #my hero academia, #bnha, #anime, #katsuki, #bakugou, #bakugou katsuki, #denki, #kaminari denki, #kaminari, #denki kaminari
22 notes · See All
Next Page