Ok so I’ve been thinking up this idea for a long time and was wondering if anyone would be interested in it. A series around how I would build pop culture characters in dnd, along with headcanons of how and what they would play. My initial ideas and plans are for DC characters most specifically Gotham and Gotham adjacent as I love my bat clan and the rouges gallery more then I can express. My knowledge is not entirely comprehensive of dnd or dc comics but I have a love and passion for both these things and hope y’all will love it too. Feel feee to add suggestion of characters or what you think they’ll be.

Batbois:*walking in slow motion with music in the background*

Barbara: uhh what are you doing

Steph and barbara at the same time: of what

Tim: that you can’t do a walk off

*Barbara Steph and cass doing a walk off*

Jason pulling out his guns: These are RAISINS!!!

Marinette cackling: Damian! Come save me! Your brother is stupid!

y/n: (holding a valentine’s letter) someone said I should give this to someone special.

y/n: jason can you help me deliver this.

Marinette: I love you with every inch of my body!

Damian: That’s not a lot of inches but I love you too!!!

Jason: *cackling in the background*

Denial was something Duke specialized in.

Nowadays, he spent 90% of his time in the land of “what is happening?” and his subconscious kept whispering that this was only a temporary arrangement.

His parents would show up at Wayne Manor and they would thank the Waynes for their courtesy and they’d wrap him up in that honey-and-lavender hug that his heart ached for all the time.

Around the seventh month of being a Wayne, Duke had gotten better at hiding his grief. He avoided the dinnertime that Alfred forced everyone to be at and used it as an opportunity to do some patrol the old way. Black hoodie, sneakers, and alone with his thoughts.

It was one of those days where the sadness seemed to sit on his chest like an elephant. He could hear the sounds of ruckus and laughing and shouting but he was sitting on his bedroom floor with his arms around his knees and trying his best to hold it all together.

The sobs came soft at first, soft with the realization that he’d never see them again. No more game night on Fridays where his dad promised them his lasagna could only get better. No more of his mother’s cookies that Duke would always prefer to Alfred’s.

Then the dam burst and he couldn’t stop crying.

His head was starting to hurt but that didn’t mean he would stop. He felt like every tear was for every time he failed them. Every time he didn’t tell them he loved them when he could have. Duke didn’t find them fast enough, now they were suffering, prisoners to a madness akin to Joker’s.

Duke jerked away. He swiped at the tears lingering on his cheeks and pointed an accusatory finger at Dick.

“What are you doing?”

“I’m trying to help,” Dick softened his tone. “Duke, why are you…is it your parents?”

“I can’t help them but I can try and help you.”

Dick adjusted his sitting position to sit crisscross-applesauce right in front of Duke, forcing him to look at him.

Dick ran a hand through his hair as he tried to relate to the sorrowful teenager. It wasn’t his first time doing this.

“It’s fine to cry, Duke. I remember when I lost my parents. I didn’t fully register it at first. It was like living in a fog. B took me in and I just…it was always in the back of my mind that I hoped they’d come back for me. I’d almost imagine them walking through that door and thanking B and Alfred then taking me back to the circus.” Dick’s voice was slightly above a whisper, but loud enough for Duke to hear.

He hid his shock. That was exactly what he felt like.

“Is it like,” Duke fiddled with the zipper of his hoodie, “like you felt this wasn’t permanent. Like you really aren’t a Wayne because your parents are waiting for you. Like this is just a bad situation that’ll get fixed by some miracle.”

Dick nodded, “Exactly like that.” He reached out to put a hand on his shoulder, and Dick took it as a good sign that he didn’t immediately shrug it off. “Duke, it gets better, but you have to get to a place where you have to realize you’re not selfish for wanting to live your life.”

Duke felt numb listening to it, even though he knew Dick was right. He wiped his eyes again.

Dick nodded and reached an arm out, not hesitating to pull his brother in for a hug.

“Duke, I know it’s tough right now, but just remember you got me.”

Duke nodded quietly, allowing himself to rest his head on Dick’s shoulder. He ignored the swelling in his chest at the familial gesture with which Dick hugged him. But he appreciated it.

Dick had never seen Duke look this…vulnerable. In the months he had been at the Manor, Duke had effectively distanced himself. Everybody already knew that Duke was sneaking out at night to patrol on his own, but nobody had stopped him. Dick had to stop Damian from marching to Duke’s room in his aggressively affectionate manner and demanding to know why Duke wouldn’t join dinner.

Duke had always seemed like the strong one, the one who was the most emotionally stable out of all of them. Dick should have known.

“Why do you care?” Duke sniffed, his brown eyes meeting Dick’s blue bravely. “It’s not like we’ve known each other for very long.”

It was a valid question, Dick could admit, but he still wanted to laugh out loud. Why wouldn’t he care?

He flashed a comforting smile at the kid, to let him know he cared.

“The moment that B took you in, you became a part of this family.” Duke raised a skeptical eyebrow, and Dick raised his hands up defensively. “It’s true! You’re one of us now, Thomas, whether you like it or not.”

Duke wiped at his eyes, smiling a little. Smiling was a good sign, right?

“That doesn’t completely answer my question.”

That earned him an eye roll, but Dick wrapped his arm around Duke shoulder again and squeezed lightly.

Despite the guilt, Dick felt another emotion creeping up his heart as he held the boy. He felt that protective instinct that he always felt during patrols and missions that included Jason, Tim, Cass, Dami, and Steph.

Duke might have been new, but for better or for worse, he was a Wayne now.

Dick: *At the fridge getting somethin*

Jason: *Goes to him and pokes his sides* Boop!

Dick: *Jumps up, hitting his head on the fridge*

Jason: Yea, but I didn’t mean to do that! *Goes to sit in a chair, only for it to give out on him, making him fall to the ground*

Tim: *Laughing at Dick’s and Jason’s pain* That was so beautiful!

Jason: That was the fastest karma I’ve ever gotten in my life!

Tim: Why are people so obsessed with “top or bottom”?

Damian: Honestly, I’m just excited to have a bunk bed.

Jason: Umm, I’m pretty sure Timbo was talkin bout sex. What are you, 12 or somethin?

Damian: What the fuck is sex?

Soooooo how about the batfam playing Among Us???

Dick: I gave you the key for emergencies only!

Jason: We ran out of doritos.

Marinette dangling from a chandelier: JASON STOP IT

Jason holding a dead roach he just caught in a tissue: But you like animals Mari!

Marinette: I HATE YOU!!! I HATE YOU! I’M TELLING DAMIAN YOU’RE TORTURING ME!!

[Jason and Tim sitting in jail together over some dumb shit]

Tim: So who should we call?

Jason: I’d call Bruce, but I feel safer in jail. 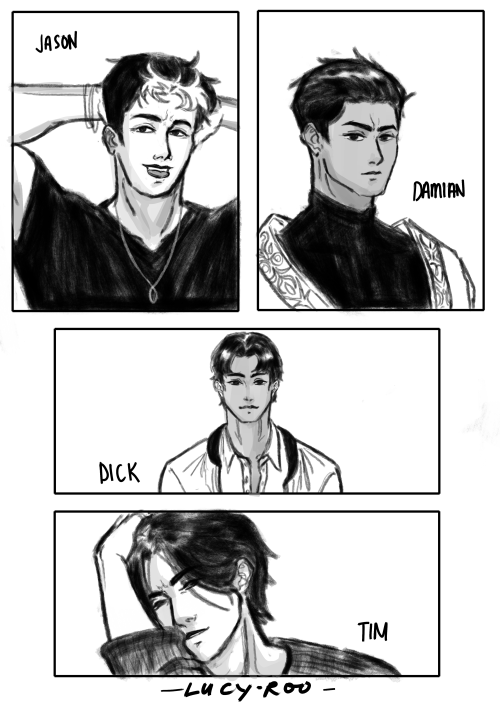 Duke : “Why is he singing that one song from rattatouille?”

Jason : “He does this everytime he cooks”

More BatBro headcanons because I can.

Roy: can we have some lights on?

Roy: your electric chair is on

Jason: I’m poor, not a savage

Hey y’all! So I need to get better at writing fluff because… *Slowly just hiding all of the brutally murdered and traumatized oc’s in the background* reasons…so submit stuff to my ask box anddd I’ll write about it limitations apply..

Such as incest because no.