Hi!!! I’m looking for more marvel/DC mutuals on Twitter please reply with your @‘s 👉🥺👈 my @ is misskylegend☺️ 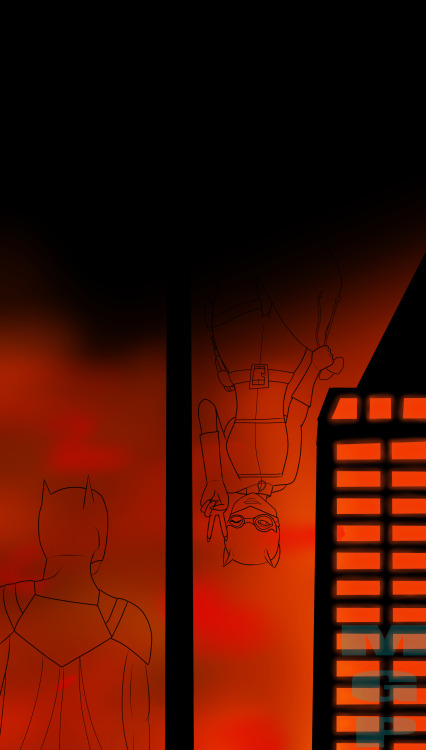 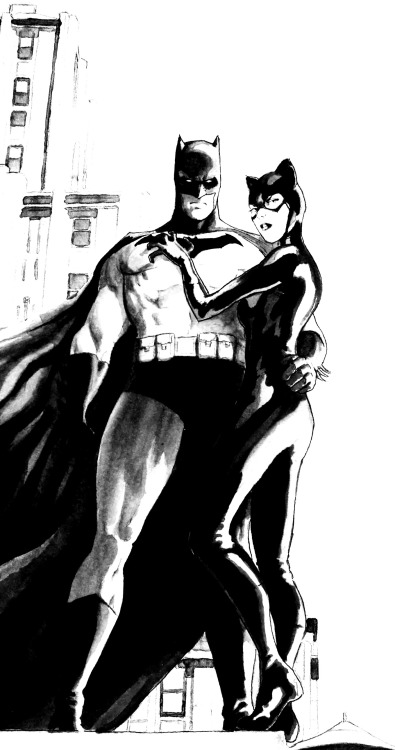 Most certainly.. again not a ship I partake heavily in but cheer on from the bleachers. 🦇 🐈

Batman and Catwoman by Mikel Janín

Batman and Catwoman by Dan Mora 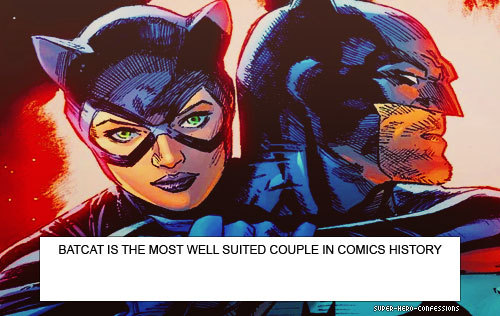 They’d been chasing Catwoman for hours now. She’d taken them on the biggest goose chase.

Batman had asked them, more like told them, to assist him in catching Catwoman. Apparently she had stolen something of tremendous value. Batman had refused to tell them what Catwoman had stolen.

Finally, after hours, Barry had cornered Catwoman and Hal had detained her. Soon enough the rest of the team showed up. Diana quickly frisked the thief and held up a small black box.

Diana gave him the box. Batman opened it and shut it quickly. Just as Diana was about to lasso Catwoman, Batman stopped her. He walked to where Catwoman stood and told Hal and Barry to back off.

“Do you remember the first time I caught you?” Batman asked, and it completely threw off the rest of the team. What did that have to do with anything that’s happening now? “You stole the Traver’s necklace.”

“After I returned the necklace to its owners,” Batman paused, “I bought it and had it made into a ring.”

Catwoman looked slightly surprised, as if she hadn’t realized what exactly she’d stolen. The team was still confused as to what was happening.

Suddenly, Batman got to one knee and opened the small black box, facing the beautiful ring towards Catwoman, much to the shock of the entire team. “Cat, would you make me the happiest man in the world and be my partner in crime?”

Catwoman covered his mouth for a moment before pouncing on Batman. Fully pressing her lips against his.

By the time they seperated, Batman’s lips were stained with her black lipstick as he smirked, “I’ll take that as a yes.”

None of the heroes spoke, and then, still in their stunned state, jumped when claps and cheers were heard. Suddenly, around them, were all of Batman’s children and his cousin. They were clapping and cheering, Red Hood and Batwoman also wolf whistled.

#BatCat, #Batman, #Catwoman, #like all of the BatKids, #The Justice League, #the ogs were there, #I just didn’t mention most of them by name, #superman, #wonder woman, #flash, #green lantern, #lots of peeps, #fanfic, #i just happen to think BatCat would be a flameboyant couple
12 notes · See All
obvslybatwmnText

Dick: I am very lucky to have parents who really don’t fight at all.

Dick: But when they do fight it’s a very specific style that I like to call “The Bisexual Threat”.

Dick: Like I’ll be up in my room and suddenly I’ll just hear my dad scream

Dick, mimicking Bruce: “I could get a boyfriend so fast! I could get into a beautiful, loving relationship with a man so fast!”

Dick: And my mother will just fire back with something like

Dick, mimicking Selina: “You thought I haven’t thought about being a lesbian?!”

Batman and Catwoman by Joe Quinones and Stacey Lee

Pupper love and tears au, the team learning about this pupper identity

Dick: *in front of all the superheroes* I have bought all of you here for an important meeting now. So we know my partner Wally has been with me-

Jason: Roy shut the fuck up before I take Lian from you.

Dick: thanks jaybird, anyway. My partner Wally has been with me since I started as a Robin, and I have made him apart of every team I’ve been on and since the one person found out. *Looks at Barry* it’s time I tell you the truth.

Dick: also in hopes to stop Robin from taking Wally whenever he pleases. *Glares at Damian*

Wally: *turns into a human with pants on* h-hi… *Stands up and given a flannel shirt to wear*

Everyone: *surprised and just quiet*

Dick: this is Wally West, Barry’s lost nephew and my boyfriend.

Dick: I will shove my foot up your ass if you make on remark Hood.

Roy: YOU MEAN HE WAS A WEREWOLF THIS WHOLE TIME!? HE SAW ME NAKED ONCE!

Wally: you didn’t have to come out like that dude, I couldn’t erase that from my memory….

Wally: I stayed at his place once for Dick, sir.

Dick: my poor baby was scared because of that. *Rough up his hair a bit the way Wally likes it*

Dick: he also saw you and cat so thanks guys, love the mentally damaging pics in my boyfriend’s head.

Garfield: that’s so cool, so now we have two Wallys!

Wally ii: yeah… Who was the person who found this out?

Dick: Barry and iris, Wally’s mom asked them to come with at Blüdhaven and they found out when she came to him. I just didn’t want him spilling his guts.

Jon: so he knows the bats pretty well huh?

Steph: aw thanks bud, see someone has taste in this family.

Dick: yes but I think you’re missing the point Bart.

After all of them greeted Wally and Damian saying he’s still getting Wally no matter what the two went home. Barbara asked if he needs school and Dick already told her he graduated with him because Dick wasn’t going to suffer alone with school.

Dick: how are you feeling Wally?

Wally: I’m fine, seriously. I trust them and now I get to see my family, I couldn’t be more happier!

Uh mini comic about Edward being late for a party Oswald invited him to because he had a run in with Batman… *click for better quality!*

*note! Bruce is in the bg and feeling a bit guilty while chatting with Oz…*

#''I cant stop judging everything you do but I can't get enough of you'', #💔💔💔, #I wish I could will fanvids into existence just by thinking about them, #this is from cat's pov of course, #batcat, #gotham, #bruce x selina, #bruce wayne, #selina kyle
9 notes · See All
theballetslippertheblackhoodieText

“I have to say, Bruce, this is the stupidest idea you’ve had since you became The Bat-Man.” Selina Kyle said, as she stared out at the dark, dingy, damaged, and damned city that they called home.

She received no reply from the man in question, but she knew that he hadn’t left her side.

“We were fearless and young, Selina.” Bruce said, as he stepped out of Gotham’s never-ending shadows and into her line of vision. Something in Selina broke as she threw herself into Bruce’s arms, and cried. Bruce wrapped his arms tightly around her. He only hoped that she would understand why he left Gotham all that time ago.

“That doesn’t mean that you had to do what you did. I missed you, Alfred missed you. Gotham missed you.” Selina’s voice was muffled by the fabric of Bruce’s suit.

Bruce gently pulled Selina away from him, and kissed her.

Perhaps they would be able to find a way to make it work between them, between the cat and the bat, and for now, the game of cat and mouse would have to be put on hold. Gotham could burn bright for a while longer.

decided to work on that batcat piece some more. I think its coming along well. Though I am not looking forward to trying to color them. 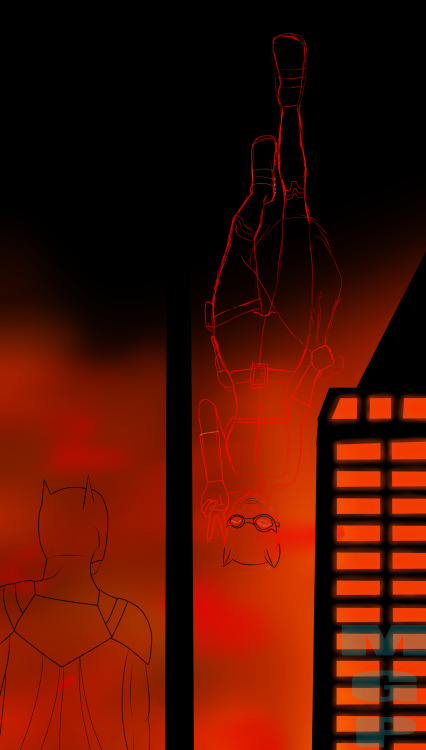 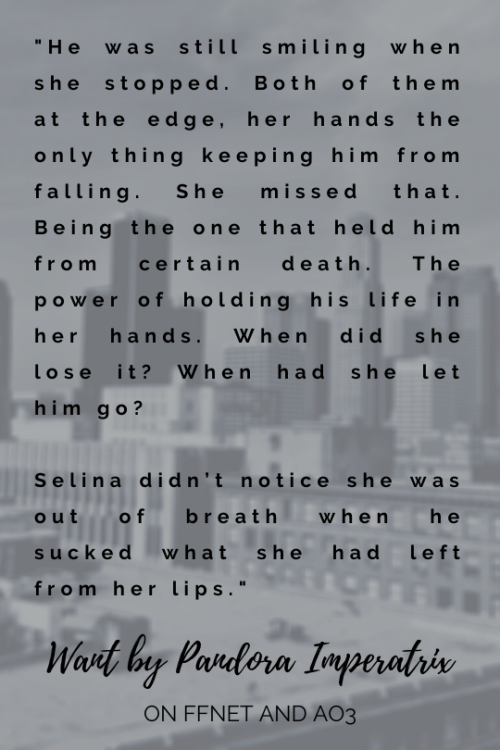