Considering how much I loved Beastars, I really should but I also loved Beastars because I loved the main cast, so I find it’s always hard to switch from narrative point of view within the same universe.

I’m sure I will eventually, though! For now I’m trying to get into BNHA and HxH and it’s actually starting to be easier for the former! :)

Take care Anon and have a nice day!

Gojo making an appearance in Beastars? 🤔

Oh, my God!!! What an intense scene between legoshi and haru waiting for that moment and I had to ask him about louis, why!!! 😭 / OH POR DIOS!!! Que escena más intensa entre legoshi y haru esperando ese momento y tenía que preguntarle por louis , por que!!! 😭

Next time Yafya’s bringing Gosha over to his place 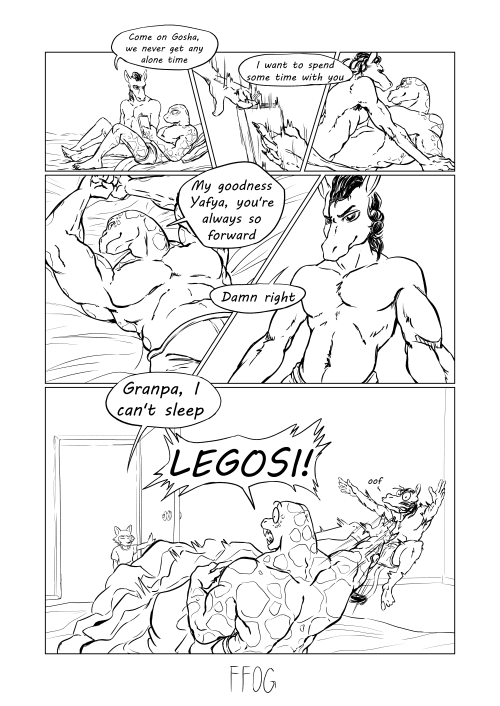 TO TAKE MY LAUNDRY

As long as he ain’t a cannibal-

“Knowing that Haru still has some remaining feelings for Louis, Legosi decides to express his love by distancing himself from Haru. Just when he decides to focus on finding Tem’s killer, Legosi is attacked by an enormous carnivore. In a pinch of desperation, Legosi makes an unexpected counterattack to get clues on the killer.”

A/N: I sure can! I know this is a little old and the requester probably wanted whole series content but some of these still came out kind of horn//knee

- They type who just goes for it. If he feels the attraction is strong enough or the moment is right, he doesn’t hesitate at all.

- Whenever he realizes he wants to kiss you, that’s when he does. He doesn’t beat around the bush whatsoever.

- Will back you up against the wall and will cage you between his arms so you don’t really have anywhere to look but at him. Leans forward and captures your lips in a searing kiss. Puts just enough passion behind it that you feel your knees go weak.

- Overall good kisser, closes his eyes while kissing (Herbivores don’t like looking people in the eye.)

- Would have to be provoked into the kiss.

- Despite his overall submissive energy, he’d be the one to kiss you first. Probably out of jealousy.

- The type that would get swept up in the heat of passion and kiss you.

- He cups your jaw/neck in his hands as he kisses you. Very romantic, very sexy.

- Overall, he improves over time as he gains more confidence. His kisses are sweet, they just need to be more bold.

- Plans to kiss you ahead of time and plans exactly how she’s going to do it but she makes it seem spontaneous.

- Very good kisser because she practices and also caters the kiss to how she thinks you will like it/ be the most responsive to.

- Closes her eyes initially but opens them before the kiss is over (Not in a creepy way, she just really likes looking at you and wants to savor the moment)

- Overall, a very confident kisser. The type to make you feel like you’re experiencing a romantic kiss scene in a movie.

- His kiss is completely driven by passion and lust.

- He’ll be with you, you’ll flash him that smile that he loves so much and before he can control himself, he’s kissing you.

- The type to pick you up while he kisses you because he’s so tall (and strong) so it makes it easier than him bending over.

- Overall, the best kisser. The type that always has you begging for another as soon as he pulls away.

- Grown man so you know he asks for consent (which is so soo sexy.)

- Leans down and once his face is a couple of inches from yours, he asks “Can I kiss you, baby?”

- Lightly bites at your lip before soothing it over with his tongue then sliping a little into your mouth. Brushes the top of his tongue against your own in a teasing manner.

- The type to lean his forehead against your own after the kiss. Chuckles to himself which entices a few giggles out of you.

- Overall the most sincere and natural kisser. It’s not overly sexual but the kind that leaves a promise of more to come.

- Kisses you by surprise. It’s rushed because he’s nervous but trying to overcompensate.

- The most eager. Really wants the awkwardness of the first kiss to be out of the way so he just goes for it.

- Doesn’t use too much tongue but his tongue has a certain sharpness to it so the ridges aren’t exactly comfortable when he’s forcing it into your mouth.

- Overall not the best because he’s overthinking the whole thing. However, he is pretty good at following directions so once you tell him to slow down and follow your lead, it’s pure bliss.

- Also very touchy in future kisses. Can not keep his hands to himself and always ends up groping your ass (or even shoving his entire hand down your shirt to tease your nipples if the two of you are alone.)

- He grabs you by the waist to tug you forward then just slams his lips onto yours. It’s very sudden but not unpleasant. He’s pretty experienced so despite the roughness, he’s still an amazing kisser.

- Always goes a little further than just a kiss. Usually moves down your jaw to your throat in a trail of hot, needy pecks until he reaches his goal: the base of your throat where he’s knows you’re extra sensitive.

- Overall the most agressive kisser, but his kisses are always heated and arousing. He also tends to involuntary growl during his kisses (a sexy growl, not an angry one).

(this is a joke btw don't take it TO seriously)

I don’t usually recommend fics that I read, but this one is personal to me. This fic is one of the greatest factors in prompting me to question my gender identity, and I love it to death for that. Also, the author, slitherwisp is a great inspiration for me. The fic is called Chirality. It’s a beastars au, for those of you who are in that circle, where Legosi is a trans female.

Here’s the fic for those who want to read it.

Join the Chirality Discord Server!
Check out the Chirality community on Discord - hang out with 28 other members and enjoy free voice and text chat.
Discord

There’s also a discord, though I suggest joining after you catch up with Chirality because of spoilers, where I’ve met some really charming people. I’m also slightly ashamed to admit that I’m more active on there than my own server… I may not be a good host, but slitherwisp aka haruspex is!

plz stop what you’re doing and look at this beautiful piece of art!!!!