Literally what was the point of beast!Ben in the plot of Descendants 3? Was it just to provide the circumstances to separate the VKs into boys and girls? Give them the first reason for Harry to be at least nice to Jay? Because I feel like it was a really wasted plot point.

#disney descendants, #descendants 3, #ben descendants, #honestly it really feels like the final movie writers were too eager to please, #so they looked to see what the fandom wanted and saw that beast!Ben was a thing, #and then gave us a scene that lasted what three minutes and with no plot important
1 notes · See All
ishiphumasohardText

This’s Evie’s “What do you want with my boyfriend” face.

Similarities between Mal and Audrey

Before you scroll past, hear me out, okay!

THIS ISN’T MEANT TO CONVINCE ANYONE that you have to like both of these characters in any means, it’s perfectly okay to agree to disagree, this is just to maybe help some be a bit more accepting/tolerant.

the look we got, wonder if the core four look any different?

found a clip on youtube: ben is the only one who looks different.

Seriously they’re so cute together

Uma barely remembers the time when her mother lived. Her life in the castle is the only reality she knows. The Island succumbs to the Evil Queen and the descendants blindly worship Evie.

Uma is in charge of Evie’s security. Everyone on the Island fears her presence and yearn for her from the distance. Except for one pirate.
Evie could have anyone by her side, but none can compare to her impossible love. The prince with the sweet smile she sees on television.

He smiled broadly and swallowed. Ben hugged her around the waist, lifting her off the ground and spun her around.

“I feel light, with a clear mind. I feel happy. I’m with you.” Ben kissed her hands again “At your service.”

It is now time to sing 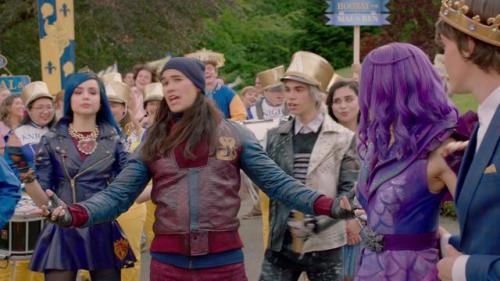 ben: what have i told you about kidnapping?

harry, talking to ben after mal tells everybody the truth: everywhere i go there’s men disappointing me this should be a hate crime

#harry hook, #r we sure he didnt say this guys, #ben descendants
3 notes · See All
papillonprecieuxText

evie: honey,,, h-he pushed you down the stairs.

ben: -smiley- he said he was gonna hook me so i’m thanking him because he didn’t!

Drabble
Descendants 2 - Ben x Platonic!Reader
Summary: “She tried to wipe my memory, (Y/n). How many times has she done it before? I mean, sure, she couldn’t remember the whole spell, but she knew enough of it to start.” Ben’s voice was shaky and fragile. You feared how much of his broken pieces Mal was responsible for.

Ben paced back and forth, running a hand through his hair. He had been like this for ten minutes now, an inconsolable mess of stuttering rants and deep sighs. You could feel his panic radiate off of him, thick enough to steal any words you might say to comfort him.

“It’s all my fault, (Y/n). I should have– I could’ve been more attentive, I should have seen this coming, I mean, she’s my… she’s my girlfriend! Or was she? Are we still together?”

He had been questioning his relationship with the girl he was dating, and you still weren’t exactly sure why. He had mentioned something about spells and lies, but it was still confused in your mind. Looking at him, though, you could tell you weren’t the only one who was completely baffled by the day’s events.

He eventually settled onto the edge of your bed, his hands still mussing his hair, but his panicked speech stalling. You sighed and sat on a chair across from him. You had been friends with Ben for years, and you had never seen him this worried - not even when he had come to you about the problems he had with Audrey. Something bad was happening here - something worse than a lovers quarrel.

“She tried to wipe my memory, (Y/n). How many times has she done it before? I mean, sure, she couldn’t remember the whole spell, but she knew enough of it to start.” Ben’s voice was shaky and fragile. You feared how much of his broken pieces Mal was responsible for. Last year he told you she had given him a love potion. Back then, it didn’t seem to shake his faith her. Now, you were wondering if it really had.

He spoke again, his voice barely over a whisper, “What if she had the spell book? How much would be different if she had gotten to finish it correctly?”

The two of you sat with Ben’s deepest fear between you, both at a loss for words.

Ben’s trust had been shaken. You knew first hand that such a thing was hard to do.

“You’re not the only one to blame, Ben,” your voice was steady in the quiet of your room, “Mal close to make those decisions. Yes, she was having trouble fitting in, but… that’s something the two of you should have handled together.”

You had to be the voice of reason. Otherwise, Ben would be quick to let it go.

It had struck you long ago that your best friend was a bit of a self-saboteur. He always seemed to find himself in situations and push himself to his breaking point. When he first knew that Mal had given him a love potion, he let things play out. He let himself become a pawn in her game. Sure, things ended up being fine, but he still started a relationship with her when there was no foundation of trust for it to be built upon. That’s what led him here - to a broken relationship because it had been a house balancing on stilts.

But he still loved her. You knew it, and you would be fine with it because it made him happy. But you worried about him. He always played the game with half the deck.

You bit back a reply. There wasn’t much more you could do.

“I have to make things right.”

He smiled at you briefly, and you nodded back, forcing the corners of your mouth to quirk upward reassuringly.

“I love her,” his voice was strong with conviction.

He stood to go, his nervous energy having been quelled for the time being. You sighed quietly to yourself. ‘It has to work out,’ you thought silently, ‘because it if doesn’t, he won’t ever be the same.’

Mal: Did someone say Draco MALfoy??

Audrey, done with this: What do you want Draco?

Every time my 3-year-old nephew visits me, he asks me to see Uma’s movie (This is how he refers to D2). Before continuing, I want to make something clear. According to my nephew, marriage is for living with someone. In dating, you don’t live with that person. That is all the difference he sees. So, according to him, these are the things that happen in the movie:

I cannot promise that I have not influenced my nephew in some of these ideas. He has seen this movie over 20 times with me. And surely I have let out a comment or another about Huma, Buma, and Benry, in addition to Benvie. But credit where credit’s due. My nephew’s solution to bringing peace includes a queer and polyamorous world.