Trending Blogs
#ben hargreeves
yanderechachaAnswer
Hi! If it’s alright, could I request how the Hargreeves would react to their beloved having been assaulted/harassed in the past, and it resulting in a fear of being intimate? How would they react/potentially comfort them? I hope this doesn’t come across weird I just kinda use this as a coping mechanism I guess...but if it in any way makes you uncomfortable then by all means ignore it, I’ll understand! I love your blog very much! Please never stop writing

♡ Yandere Headcanons: The Umbrella Academy || Beloved With a Fear of Intimacy Due to Trauma ♡

What is a doctor that specializes in the heart called?

Klaus, writing his answer: I know this because I’m blind!

Luther would go to jail for tax evasion. Then again, you can’t pay taxes if you’re on the moon.

As he has before, Diego would definitely go to jail for obstruction of justice. Let’s say one day, he gets on the wrong officer’s side, and Patch isn’t there to bail him out. Tough luck, Diego.

In a world in which Allison would have to face consequences (and didn’t have use of her powers), she would go to jail for bribery. Without her “I heard a rumor”, it turns out that getting Diego off that obstruction of justice charge proved to be a whole lot harder than she thought, and that the officer she was trying to bribe was NOT having it.

Klaus would probably go to jail for illegal drug possession. We know Klaus. He’d probably try to sweet talk his way out of it, not that it’d do much good. Oh well, at least he tried.

This one was a bit tricky, but Five would most likely go to jail for assault. Say somebody got on his nerves on the worst day. He wouldn’t hesitate to threaten or possibly smack the hell out of whoever is vexing him. The “kid” is pretty threatening, though, so it would take a cop that’s either really stupid or really brave to stop him.

Ben is capable of going to jail for getting roped into whatever Klaus was doing. Klaus told him he wanted to go get waffles, so Ben decided to drive them to the diner. Of course, it was just Klaus’ cheap excuse to meet up with the dealer in the parking lot, completely unaware of the patrol car sitting a few feet away.

And I personally don’t think Vanya would ever step foot in a jail. Unless we’re counting that whole “ending the world” thing. What would the charge even be for that? Involuntary humanity slaughter? And she DID kill that guy that one time… Okay, if the whole apocalypse business hadn’t happened, I think Vanya would be too careful to get herself locked up.

The same empathy you show for Vanya, Klaus, 5 and Ben needs to be shown for Allison and Luther too. They were all abused as growing up (physically and emotionally) and that abuse effected all of them differently, the double standard needs to stop.

#q, #tua, #the umbrella academy, #ua, #umbrella academy, #klaus hargreeves, #five hargreeves, #ben hargreeves, #luther hargreeves, #vanya hargreeves, #allison hargreeves, #diego hargreeves
33 notes · See All
amazingmsmeAnswer
If you're taking prompts from that list then I'd like to request something with Five, Klaus, Ben and Diego. I imagine Diego trying to show Five a "cool knife trick" while Five sits unimpressed until Klaus and Ben decide to mess with him (cue ghost boi tickles) and Five starts giggling (cue Diego) "Are you laughing at me?". Which leads to Five getting attacked by Diego. I love these boys. (@dead-inside-like-loki)

This it so cute, thank you for the prompt!

It was nice having Five back, Diego thought. After he had disappeared, their hope that he would return slowly diminished until it was non-existent. And then he was just, back. Same as the day he left, only he wasn’t. Despite the fact that he acted like the crotchety old man he insisted he was, Diego still saw him as his kid brother, and he wanted nothing more than to give him the rest of the childhood he missed out on. Not that the one the rest of them were left with was any good, but he knew it was much better than living in an isolated wasteland. So he went out of his way to catch up with Five, share stories and do things that he knew the other liked. He had forgotten just how alike they were, especially when it came to their fascination with sharp objects.

They stood in Diego’s room, going over his knife collection. Five admired each one, holding them in his hand and feeling the heft of its weight.

“Hey, watch this,” Diego nudged his shoulder to gain his attention.

“Hm?” he asked, barely tearing his gaze away from the blade.

Diego balanced a knife on his finger, the point just barely digging into his skin. “Pretty cool huh?” he asked. Five pressed his lips together in a thin line and nodded curtly. Diego rolled his eyes, letting the handle fall into his palm. “Okay, fine. Watch this then,” he said, readying another trick. This time, humoring him and watched.

Little did they know, they were not alone. Klaus sat on the other side of the door, his ear pressed to the wood. His hands had the faintest blue glow, making Ben tangible enough to be able to touch and interact, but remain unseen. He stood behind Diego, a wide grin on his face as his hands moved ever closer to his sides. He was just about to try his new trick now that he had Five’s attention when Ben struck. He wormed his fingers into Diego’s sides, making him flinch and squirm. He looked over his shoulder, but only saw his empty room. Five stood there, brows furrowed.

Diego shook it off, and began balancing the edge of the blade on top of the other. Ben suppressed his giggles, not sure if they would be able to hear him or not. Diego smiled, seeing the vaguely amused expression on his brother’s face. Then he felt that damn fluttering at his sides again. And it didn’t stop. He squirmed around, quickly grabbing the balancing knife before it could fall. A few chuckles slipped out, despite his best efforts. His arms clamped down on his sides as he thrashed about.

Five watched in amusement, not quite sure what was going on but thought it was entertaining all the same. He rested his chin in his palm, hand pressed against his mouth to hide his smile. In spit of himself, he started to laugh at the funny sight before him.

Ben has mercy on him and backed off, leaving Diego confused and giggly. He squinted at Five, who was still muffling his chuckles.

“Are you laughing at me?” he asked, stepping forward. Five stopped, eyes going wide, as he knew what was coming. Memories from years passed flashed before his eyes and before he knew it, Diego wrapped his arms around him.

“No! Get away!” His legs kicked out as Diego lifted him off the ground, fingers digging into his stomach. Bubbly giggles filled the room, and a fond smile lit up both Diego and Ben’s features. On the other side of the door, Klaus was smiling brightly.

“You think I’m so funny? I’ll give you something to really laugh about!” Diego teased. He walked his fingers up his ribs, making his laughter increase in pitch.

“Fuck ohohoff!” Five yelled. He thrashed in his hold, managing to elbow him in the chest hard enough that he let him go. He teleported away; the last thing Diego saw was a wide grin and evil glare sent his way. He bolted out of his room in search of his younger older brother, not quite finished with their fun.

The door slammed into Klaus’s face, sending his flying back with a yelp. He clutched his bleeding nose, moaning in pain. Ben appeared at his side, patting his shoulder. Klaus smiles up at him, a few tracks of red running down his face. There was a bit of blood between his teeth as he spoke. “Totally worth it.”

If ben was at the dinner table when five left, does that mean five first found out ben was dead when he saw the statue? He must’ve been like ah, ben didnt come back for the funeral hahaha wait shit

Is this why the Commission wanted to end the world? So humanity wouldn’t have to face this hellhole of a year?

Today is my birthday.

It is also apocalypse day.

I want a trailer.

you mean the best Hargreeves siblings 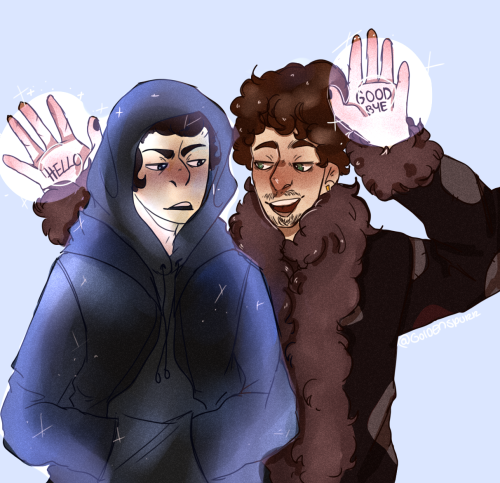 Klaus: Okay, so I have this plan-

Ben: I’m not even going to try to give advice anymore.

Klaus: So we need a hippo, a mallet, and a pack of batteries. Good? Good. [walks away]

Klaus: Ben may have died.

Luther: BEN MAY HAVE DIED?!

Klaus: we’re looking into it.

So I guess Ben just holding his tentacle demon monster like a baby is canon huh?

(A/N) I submitted this for a Wattpad writing contest so i decided, why not post it! We had to create our own hero and fit it into the UA universe and this was my entry.

I don’t quite understand what’s the media’s obsession with superheroes.  In a sense I could, considering the fact the world before October 1st, 1989 was plagued with the ordinary, but that would be a lie and I promised myself I wouldn’t lie anymore.

I could tell you a million things about myself, and you would believe it.  Why?  Part of the ‘gift’.  It’s not the word I would use, but that’s what Reginald Hargreeves would tell all of us.

This is a pointless exercise, he thinks bitterly. No amount of fresh air or changes in scenery can fix the fact that there is something fundamentally broken in him. The Academy may be full of ghosts and monsters and trauma, but so is he. He belongs there as sure as any of Reginald’s dusty old artefacts do. He doesn’t belong in this place of light and tranquillity.

The siblings decide to get out of the Academy in an attempt to escape the oppressive memories there. Time spent away is supposed help them heal as a family, but in reality, Klaus finds himself caught in the middle of the widening rift between Ben and his other siblings.