I can’t believe I never posted this but here it is now! Beverly is my fave character and his entire arch hurt me

Hardwon, not being immune to aging, starts to slow down around the 150 year mark. On the one hand, there’s nothing wrong with going out swinging… on the other, there’s less dignity in slipping and breaking a hip, even if Bev or Moonshine have restoration spells on standby. He retires to the crick to focus on illustrating a series of children’s books for the dwarfanage and the youngins.

Bev remains as spry and yippee-skippee as ever. The call to adventure, to do good in the world is too strong for him to ignore, though - it’s alright at first, he can ignore it while he finishes school. That’s what summers are for, right? But after college..? He can’t settle down. The need to roam and right wrongs drives him across all of Bahumia and through the outer planes. No one knows what really happened to him in the end… maybe he got trapped in a gem, or it’s time shenanigans in the feywild, or he goofed the wrong god and got turned into a pangolin. All Moonshine can tell is that she can’t scry on him anymore, and he doesn’t respond to true resurrection.

Moonshine… Moonshine is still there, but she’s not around like she used to be. Elves have a weird enough sense of time, and druids doubly so. Between communing with the plants and other nigh-immortals like Mee Maw and Pendergreens, and traveling the world to spread her spores and visiting other planes… there’s so much to do, and no rush to do it, and it’s just easy to lose track of time. Is it Tuesday or Wednesday? May or July? “See you again soon” means something different when you’re looking at thousands of years.

So. Moonshine’s been planewalking for the better part of the last decade, and Bev is MIA… and Hardwon is already thinking of another story to make life a little easier for the dwarfans.

Even Heros have nightmares, once the war is over the trauma will catch up. 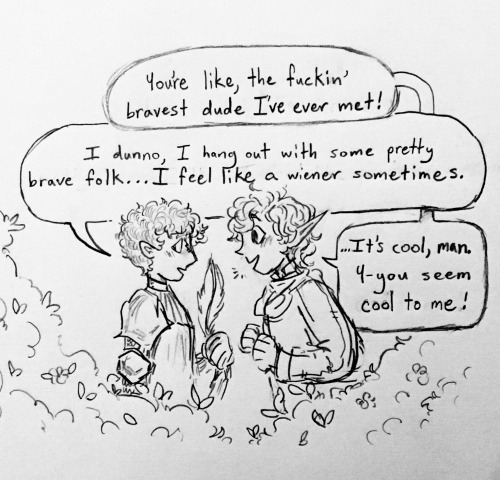 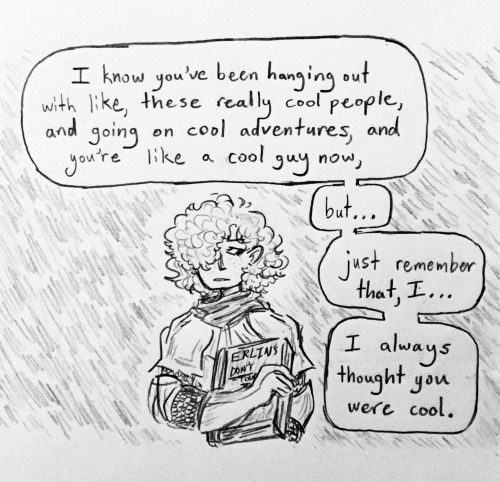 #not another dnd podcast, #naddpod, #scribbles, #traditional, #beverly toegold, #beverly toegold v, #terran, #erlin kindleaf, #*john darnielle voice* I HOPE YOU LOVE YOUR LIFE NOW LIKE I LOVE MINE, #also, #sorry for angst this is kind of old and i do not condone past me's actions
234 notes · See All
crying-into-chocolate-puddingText

beverly toegod v owns my whole soul, all of it

“Like all the most powerful things in the world…I knew I was only borrowing you.”

Here is some Beverlin to make up for all the angst. These boys are my fuel, so have them rocking out at a concert.

This moment made me cackle like a goblin. It’s to funny to me.

Akarot is a garbage man and I am glad he’s gone.

Bev but his outfits are picked out by Hardwon, Galad, then Akarot (the E-Boy rat)

He’s a cutie no matter what tho

Okay but the Naddpod ending hurt me and I wanted to draw all I could. So have some Sketches.

First post let’s make it the boys, Beverlin has my whole heart

For all the drama about Hardwon dying before the rest of the band of boobs, I feel like there’s going to be a nasty surprise when Bev dies at the usual age for a halfling.

I mean, Undying Sentinel isn’t immortality, it just says “you suffer none of the drawbacks of old age, and you can’t be aged magically.” He’ll still age normally, he just won’t get arthritis, is all.

#naddpod, #hardwon surefoot, #beverly toegold v
11 notes · See All
hey-cabinets-i-changed-my-iconLink
The Blows of a Friend, Not a Foe - TimMcGee - Not Another D&D Podcast (Podcast) [Archive of Our Own]https://archiveofourown.org/works/24225214

Moonshine’s legacy is way more than bringing dragons back to Bahumia. Beverly shares their legacy through Crick hospitality and returning what he borrowed.

“I wish I had asked him to dance with me.”

#naddpod, #not another d&d podcast, #beverly toegold v, #erlin kindleaf, #beverlin, #naddpod fic, #my writing, #the thing is. i love them. so much
49 notes · See All
fesenmoonPhoto

yesterday @beverlytoegoldv made me think about naddpod + dancing, and my mind simply would not let go of it 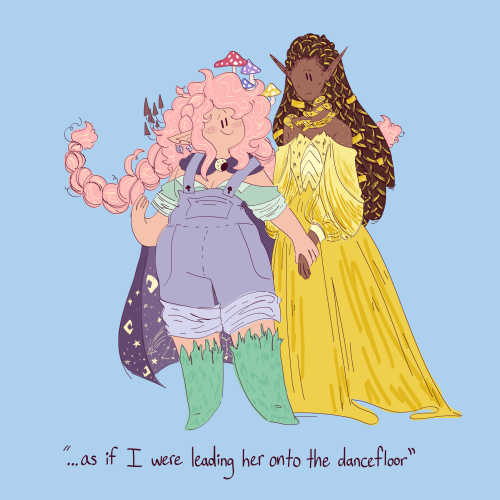 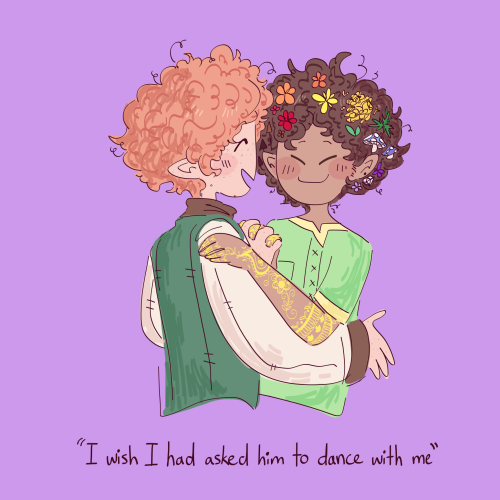 Hardwon Surefoot, adored leader of the dwarves! Surrounded by friends, so open, so caring, surely must have trained under the best of teachers to achieve his martial prowess and his brilliant tactical mind. Why did he ever leave his beloved mountains? Some say it was to see the world as the common folk do, some say it was to defeat the ruler of Shadowfell. Alas, we may never know.

Beverly Toegold the Fifth, champion of the Green Knights! A pillar of quiet dignity, it’s said he never learned more than while traveling with his fellow heroes, and none more so than from Balnor the Brave, the nigh mythical knight he was squire to. (Recently, there has been some debate whether “Balnor” was a real person or an allegory for something)

Moonshine Cybin, queen of all elves, the cryptic, the inscrutable… although seemingly open and welcoming now, this is just her embracing her connection to the crick elves. In her youth, it’s said she once spent a month cloistered in a library, lost in the pursuit of arcane mysteries. She traveled to the feywild and Gladeholm, unseating rulers and installing those she chose to lead in her absence. No realm was safe from her political machinations, not Shadowfell, not the underhells, until ultimately, she unseated GODS. Only then did her lust for power seem to be sated, but who knows what long, long game she plays now..?

So now I have had a little time to process … I’m going to miss the band of boobs so much.

NADDPOD got me through a real hard time in my life where everything was crumbling around me and got me back into D&D which is the only saving grace that is stopping my imminent meltdown in this lockdown. Something to listen to when I couldn’t sleep due to the pain from my liver reducing function, when we was terrified in hospital thinking I was going to die, when I had to bus for an hour into the lab seven days a week for a research project that was failing, and so much more. The Manchester show was four days before my operation and the joy I felt sat there in the room listening to Murph voice a puffin was the only thing which took my mind off it.

Hardwon will always be my fave but all of the boobs and the guests were all characters so real in such an unreal world. I will always miss campaign 1 but there was no more joyous way to end that story. Here’s to the next one! (And come back to the UK gang!!)