“When the definitive history of the coronavirus pandemic is written, the date 20 January 2020 is certain to feature prominently. It was on that day that a 35-year-old man in Washington state, recently returned from visiting family in Wuhan in China, became the first person in the US to be diagnosed with the virus.

On the very same day, 5,000 miles away in Asia, the first confirmed case of Covid-19 was reported in South Korea. The confluence was striking, but there the similarities ended.

In the two months since that fateful day, the responses to coronavirus displayed by the US and South Korea have been polar opposites.

One country acted swiftly and aggressively to detect and isolate the virus, and by doing so has largely contained the crisis. The other country dithered and procrastinated, became mired in chaos and confusion, was distracted by the individual whims of its leader, and is now confronted by a health emergency of daunting proportions.

Within a week of its first confirmed case, South Korea’s disease control agency had summoned 20 private companies to the medical equivalent of a war-planning summit and told them to develop a test for the virus at lightning speed. A week after that, the first diagnostic test was approved and went into battle, identifying infected individuals who could then be quarantined to halt the advance of the disease.

Some 357,896 tests later, the country has more or less won the coronavirus war. On Friday only 91 new cases were reported in a country of more than 50 million.

The US response tells a different story. Two days after the first diagnosis in Washington state, Donald Trump went on air on CNBC and bragged: “We have it totally under control. It’s one person coming from China. It’s going to be just fine.”

the US couldn’t use the readily available German test, nooooo, our companies Had to make their own, that they charged $1,325 for, and that the first two versions were worthless due to false results - meanwhile S Korea has drive-up testing stations giving 10,000 free tests every day - SOMEONE HAS BEEN PAID OFF

I’m not a Socialist but damn is it cringe to have Big Pharma come up on stage and refer to the millions of people sick as “our customers”. Like damn, at least pretend to be human, fuck.

Also BIG LOL when the spokewoman (she might be the CEO or something, I actually don’t know) for UPS goes up and says they got a “big brown army”. Like damn, I know y’all wear brown but you can’t just say shit like that lmao.

Yesterday, in Gilbert, Arizona, a man set up a roadside stand selling toilet paper. He wanted $30 for a 12-pack. Price gouging is illegal, and online markets have been revoking selling rights for everyone caught engaging in it.

A cop I used to run 911 with had to threaten to arrest him. Police have been monitoring sites like Craigslist, too, to stop people from taking advantage.

That’s good. It’s important to put a stop to that. What I fail to understand is how Eli Lilly, Novo Nordisk, and Sanofi have been allowed to engage in price gouging for YEARS by buying patents and hiking the price of different types of insulin more than 500%. States have, rather than going after Big Pharma, gone after INSURANCE. Why? Because Big Pharma donates more to re-election campaigns.

Let’s not forget Mylan, who did that with the Epi-Pen (their CEO is the daughter of Senator Joe Manchin). They just bought the company that made the Epi-Pen, used it in a legal scheme called a tax inversion, then made a hat trick out of it by involving daddy to lean on the FDA to change the rules of how it’s packaged, prescribed, and dispensed.

Fixing the healthcare system requires that we get to the root of the problem. We’ll never see that happen as long as we keep voting for politicians who are bought by special interests - and they exist on BOTH sides of the aisle. The money is in the cure, if you think about it, once there is no sickness in the mind or body, people are able to produce, move, create, solve, think, without hesitation/procrastination, a healthy human being is capable of far greater. Is that not a path to freedom that can unite us? Idk. I am not considering ideal, just the fact, when you’re not sick, you have energy, right?

Alex Azar used to be an executive at Eli Lilly, a huge private pharmaceutical company. After that, he was a paid lobbyist for Eli Lilly. He was, therefore, a natural choice for Trump to appoint as his new Secretary of Health and Human Services when Tom Price resigned in disgrace. (The fact that Azar is openly hostile to the Affordable Care Act didn’t hurt either.)

When Azar testified before Congress a couple of weeks ago, Democrat Rep. Jan Schakowsky asked him whether a coronavirus vaccine “will, for sure, be affordable for anyone who needs it.” Azar said NO, explaining that private drug companies (like Eli Lilly) had to remain able to rake in unlimited profits:

“We would want to ensure that we work to make it affordable, but we can’t control that price because we need the private sector to invest. … Price controls won’t get us there.”

Understandably, Azar thereupon became extremely unpopular with the American public. So the very next day, after extensive negative publicity, Azar backpedaled and told Congress he had changed his mind.

“I have directed my teams that if we do any joint venture with a private enterprise, that we’re cofunding the research and development program, that we would ensure there’s access to the fruits of that, whether vaccine or therapeutics.”

Immune System Expert Breaks Down The Dangers Of Vaccines9

Dr. Shiva Ayyadurai joins Owen to break down the lies from Big Pharma and the MSM about vaccines and the damage they can cause.

Is it about to go down?

How can eBay and Amazon be better at stopping price gouging than the government with the pharmaceutical industry ?

The HighWire with Del Bigtree 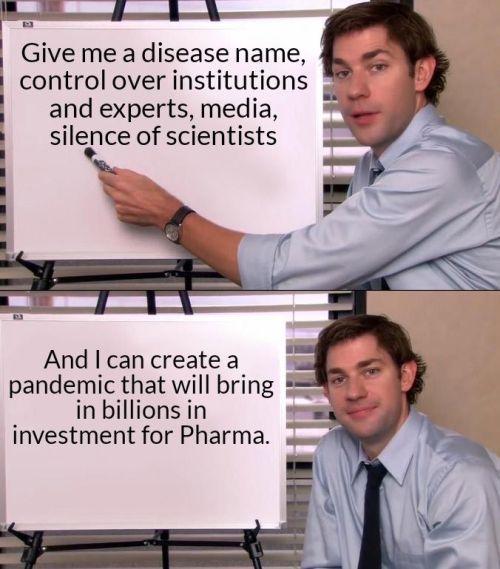 “ public opinion is both more progressive — and more malleable — than the centrists like to pretend. Ambitious, easy-to-understand policies like Medicare for All are actually more broadly popular than Obamacare-esque technocratic tinkering. In this view, the true constraint on radical reform isn’t the inveterate conservatism of the American hinterland, but the outsize influence of concentrated capital; “moderates” just use deference to public opinion as a false alibi for craven capitulation to their corporate paymasters. “