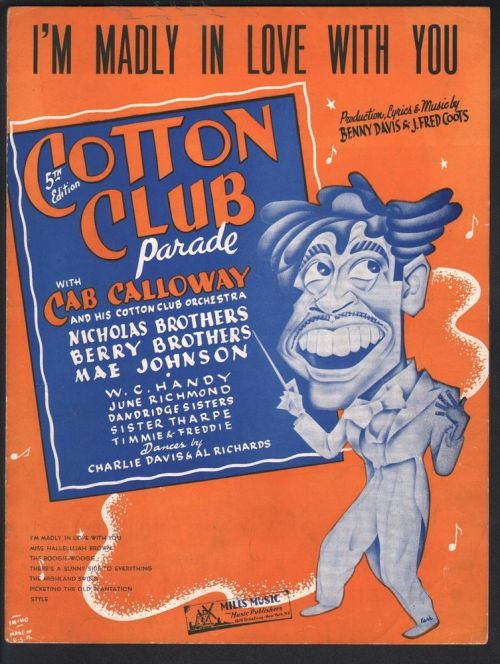 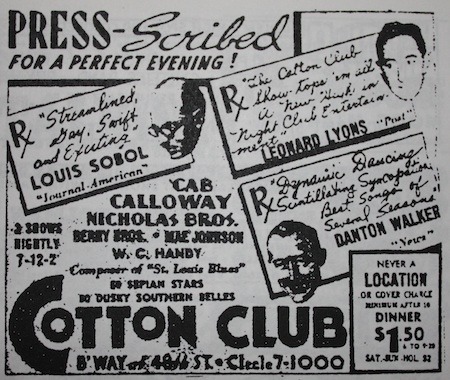 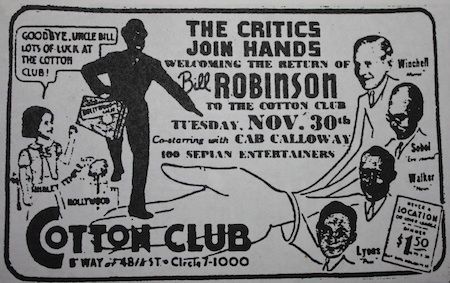 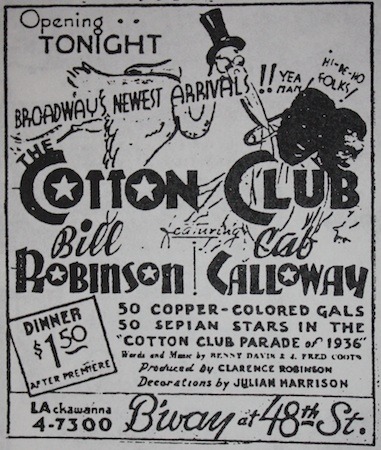 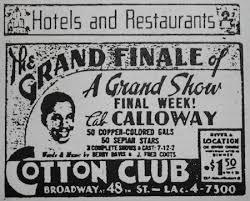 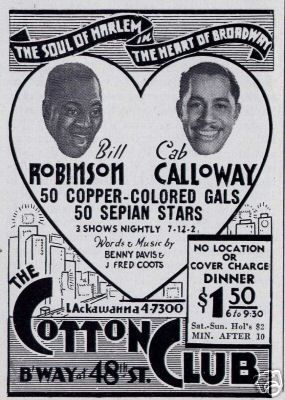 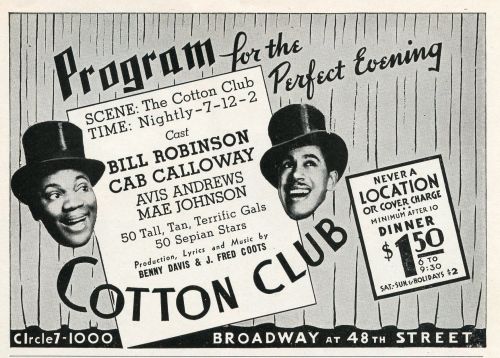 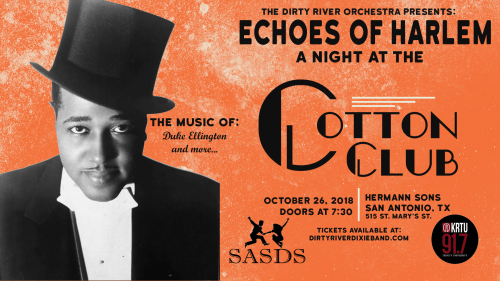 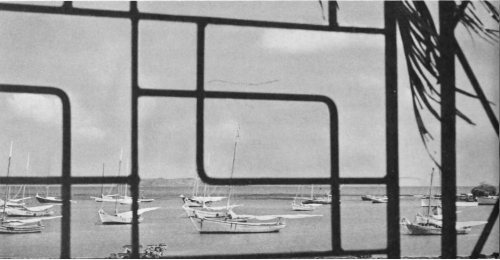 Whenever I watch older films with black actors in subservient roles, I have a habit of pausing the film, and scrolling through their filmography. For the African-American actors and actresses that worked at Hollywood’s major studios before the emergence of Sidney Poitier, Harry Belafonte, and Dorothy Dandridge in the 1950s, they toiled in stereotypical roles that read repetitively – servant, maid, busboy, slave, villager, savage, African chief. Like many black moviegoers in the early twentieth century, I am glad these mostly-unknown actors found work, but am sick to see the buffoonish, stereotype-adhering characters they play on screen (this raises questions about whether no representation or bad representation is better, but that is for another day).

Bill “Bojangles” Robinson was the highest-paid black entertainer of the 1930s: a masterful tap dancer (tap dancing is an innovation from the minstrel show, where Robinson’s career began) idolized by Fred Astaire, the Nicholas Brothers, and Gene Kelly. His birthday, May 25, is National Tap Dance Day. Robinson’s vaudeville and Broadway career had long made him a national celebrity, and Hollywood studios looked to procure his services for bit and supporting roles. While in Hollywood, he quickly learned that he could not escape the restrictions Hollywood executives had set for non-white actors – casting directors, whether by a lack of imagination or naked racism or somewhere in between, could not envision black actors beyond certain roles.

Another American cultural fixture in the 1930s was an adorable, curly-haired girl named Shirley Temple. Months before its merger with Twentieth Century Pictures, Fox Film Corporation cast Robinson in a Shirley Temple picture, The Little Colonel. Shirley Temple movies often relegated A-list actors to supporting roles – disgruntling those actors to some extent, but mollifying their frustration with the dependable profits made at the box office. Seen today, The Little Colonel is problematic in its depiction of race relations and portrayal of its black characters. And yet, it is also groundbreaking. The film features the first interracial dance couple in American film history, and spawned a close intergenerational friendship between Temple and Robinson that lasted until the latter’s death.

It is the early 1870s in Kentucky, and life has changed little since the American Civil War ended. White landowners retain their plantations and black subordinates. Those subordinates are no longer slaves, but racially-coded relations remain. Though Kentucky remained in the Union, there are numerous veterans and supporters of the defeated Confederacy within its borders, including Colonel Lloyd (Lionel Barrymore). The colonel has learned that his daughter, Elizabeth Lloyd (Evelyn Venable), has married a Yankee, Jack Sherman (John Lodge). Furious, the Colonel disowns Elizabeth – forcing her and Jack, an American soldier, to accept a posting in the West. There, they raise a girl, Lloyd Sherman (Temple), before moving back to Kentucky six years later. Before leaving the fort with her parents, Lloyd, the outfit’s darling, is made an honorary colonel of the United States Army. Elizabeth, Jack, little Lloyd, and housekeeper Becky “Mom Beck” Porter (Hattie McDaniel) settle in a household near Colonel Lloyd’s plantation without his knowledge. Colonel Lloyd eventually learns that the happy-go-lucky rapscallion bothering him and his head servant Walker (Robinson) is his granddaughter, and continues to exile Elizabeth and Jack from his life.

The Little Colonel, shown in black-and-white, ends with a brief two-strip Technicolor scene (Walt Disney’s monopoly on three-strip Technicolor would end later that year) – a “pink party” that marked the only time Shirley Temple wore makeup in a Fox film.

Adapted from Annie Fellows Johnston’s novel of the same name by screenwriter William M. Conselman (several Shirley Temple films, including 1934’s Bright Eyes and 1936’s Stowaway) and journeyman director David Butler (another Shirley Temple regular, 1942’s Road to Morocco), The Little Colonel sees Temple play a hallmark of her characters: a precocious troublemaker whose very charm melts hearts and inspires others to do what is just, despite their personal prejudices and historical biases. Only if the real world could be like that, audiences must have thought – packing movie theaters to see escapist fare like this, to forget momentarily the Great Depression. Like any Shirley Temple picture, the film is at its best when it concentrates on its young star. Most of the G-rated humor on display is gentle, ribbing others’ sense of self-importance and their absurd, absolutist behavior (especially Barrymore’s Colonel Lloyd, who looks as if he is about to sell me fast food served in a red-and-white tub). Not even little Lloyd is spared:

LLOYD SHERMAN: Aren’t papas supposed to love their little girls?
MOM BECK: Yes, honey, they should.
LLOYD SHERMAN: It seems might funny to me.
MOM BECK: It’s ‘cause all the Lloyds are stubborn. The old colonel is, your mama is, and you is.
LLOYD SHERMAN: I’m not stubborn! Don’t you call me that!
MOM BECK: Don’t you stomp your foot at me. That don’t change it, that just proves it!

Elsewhere, too much of The Little Colonel’s humor is premised in racial stereotyping. That Lloyd Sherman befriends two black children in May Lily (Avonne Jackson) and Henry Clay (Nyanza Potts) might be enough to spark outrage among millions of American moviegoers in the 1930s. As much as this decision should be commended, that commendation is tempered by their appearance – inspired by minstrel shows – and by the fact they are eating watermelon in several scenes. Barrymore’s Colonel Lloyd is not only a misanthrope, but a racist misanthrope. Where little Lloyd sees an old man who needs to be taken down many notches, few others who see this film would probably be as disarming towards him. Colonel Lloyd refers to May Lily and Henry Clay as “pickaninnies”, threatens physical punishment towards Walker and Mom Beck at the slightest mistake, and indulges in Lost Cause rhetoric that glorifies the Confederacy as righteous. He is the sort of person that many Americans on tumblr would rather not speak to over Thanksgiving dinner. For Mom Beck and Walker, the two black servants in this film are understandably undereducated. But though the film paints them as self-aware and quick-witted, it mocks their lack of education during a scene where their poor spelling and grammar is apparent.

The Little Colonel is less of a musical than other Shirley Temple films, but it is obviously not devoid of musical moments. Its one notable musical scene is without lyrics and is best known for its fancy footwork. The staircase dance between Bill Robinson and Shirley Temple is transcendent cinema. This sequence is set to an original rhyme before transitioning into “My Old Kentucky Home” (Robinson mimics a trumpet to provide the melody) and follows a late-night confrontation between little Lloyd and Colonel Lloyd. Lloyd Sherman, who has been sent away from home because her father must be quarantined due to illness, wants to see her parents – ironically, this is for the good of the film, as Lodge and Venable’s performances are indifferent. She has never been away from her parents this long, and finds herself unsettled by living with her cantankerous grandfather. But there is Bill Robinson, as Walker, to provide comfort and solace.

In this complicated, potentially dangerous dancing scene, they showcase their agility and technical ability together. Robinson was Temple’s sole tap dancing teacher; she was a quick study, soon learning how to feel the beat rather vocalize or visualize it. Without hyperbole, Robinson would later claim Temple to be one of the best dancing partners he ever had. Depression-era audiences of all races witnessed their mastery on-screen. The scene celebrates and implies that blacks and whites can address and overcome hardship together. Robinson holding Temple’s hand proved incendiary to many Southern theater owners, as many requested prints that edited out the hand-holding.

During the years after The Little Colonel’s release, Robinson – fifty years Temple’s senior – became her most frequent co-star and a dear friend (best described as a close uncle-niece relationship). Nevertheless, unlike his white co-stars, he could never embrace or kiss Temple on-screen. Robinson also stayed in and used different facilities – giving the young Shirley Temple an early, though, understanding of the racism blacks faced in America. She recalled how, on the set of The Little Colonel, Robinson was the only person in the cast or crew to treat her as an equal, never patronizing her. The two sent telegrams when apart, encouraging and motivating the other to do and be their best. This meeting of two cultural giants, their careers constrained in their respective ways, continues to provide the inspiration and joy that audiences in the Depression sorely needed – even if the films themselves reflect the most unsavory aspects of American attitudes towards race.

^ Based on my personal imdb rating. Half-points are always rounded down. My interpretation of that ratings system can be found in the “Ratings system” page on my blog (as of July 1, 2020, tumblr is not permitting certain posts with links to appear on tag pages, so I cannot provide the URL).

For more of my reviews tagged “My Movie Odyssey”, check out the tag of the same name on my blog. 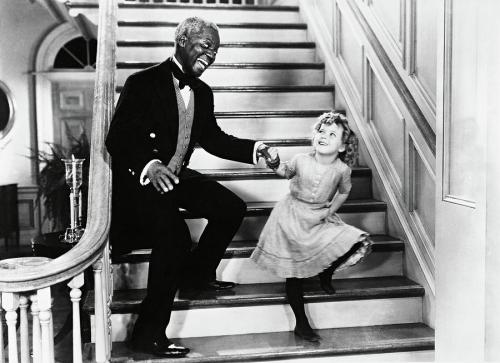 “The Man Who Was Bojangles"

In “The Man Who Was Bojangles”,  Host Kwame Kwei-Armah unravels the myths behind the men, the 1968 song & a name bestowed on tap dancer Bill ‘Bojangles’ Robinson. Are they all one-in-the same? There is more to this story about about the man in the famous song & the man who was Bill Robinson!
The 1971 Nitty-Gritty Dirt Band recording of the song became a standard of the era, & it was so popular, it could be heard in any store, car or on radio as it continues to be covered by hundreds of performers.
This is the story behind-the-story in the song. It also tells the story of Bill “Bojangles” Robinson a once famous dancer who is now (sadly) only remembered for his four film appearances alongside Shirley Temple in the 1930′s.
“Rhythm Saved The World”
PaTrix

‘At one point in the story for SCOOB, Sheriff Stone from Mystery Inc was going to make an appearance.’ - Bill Robinson on SCOOB! 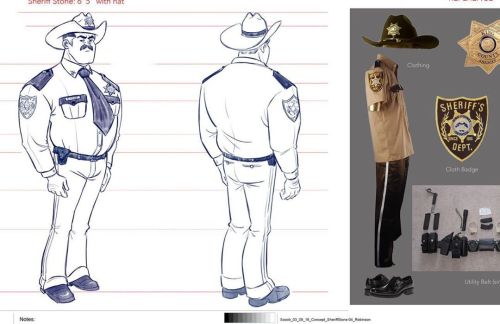 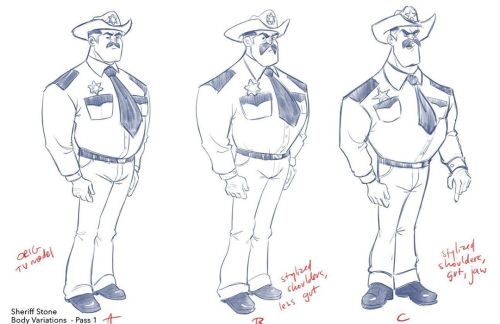 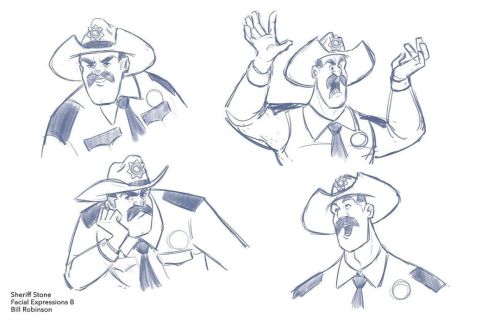 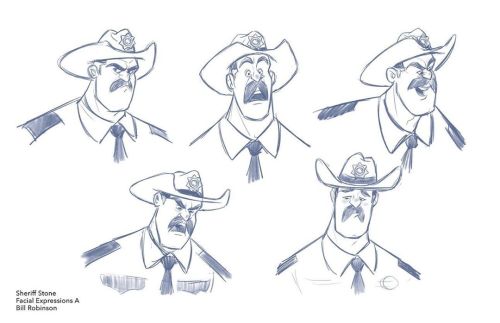 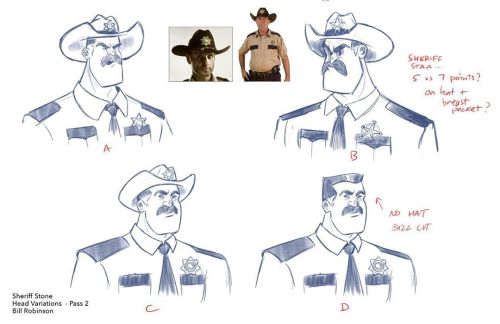 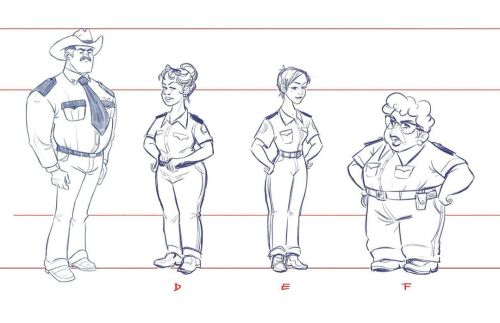 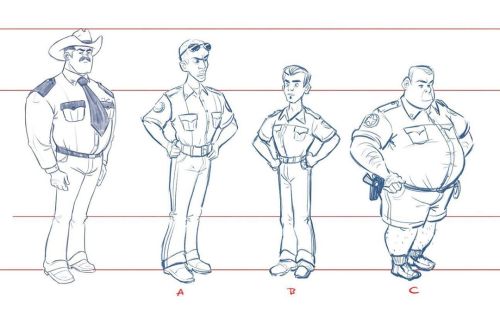 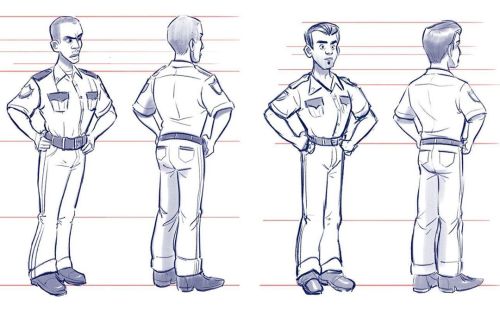 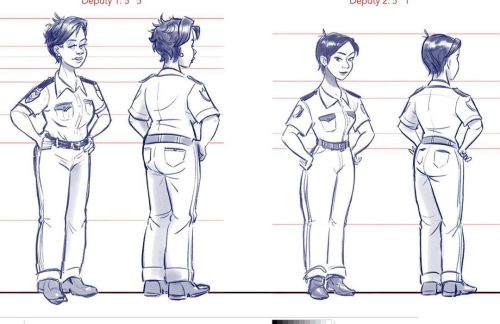 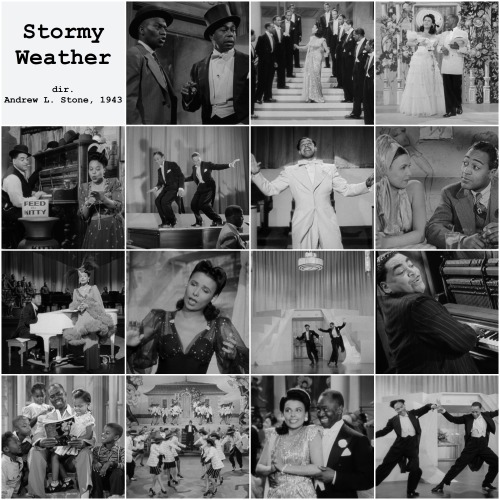 Bill “Bojangles” Robinson was born on this day in 1878. 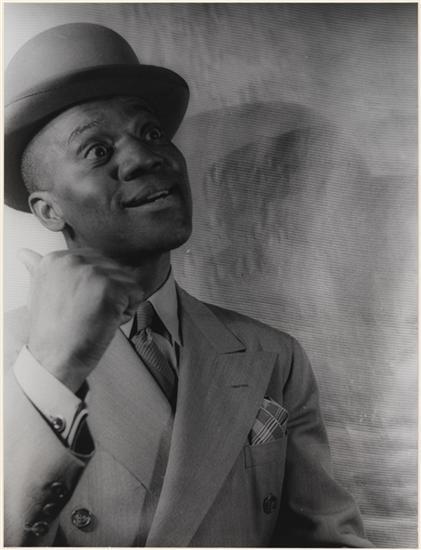 Blackbirds of 1928: sheet music for the show’s biggest hit, “I Can’t Give You Anything but Love,” by Dorothy Fields (her first hit) and Jimmy McHugh. Bill “Bojangles” Robinson was one of the featured players,

It was a big success—it ran 518 performances—and led to three subsequent versions, none of which came close to the triumph of the 1928 show. The 1939 version, however, introduced a new star, Lena Horne. 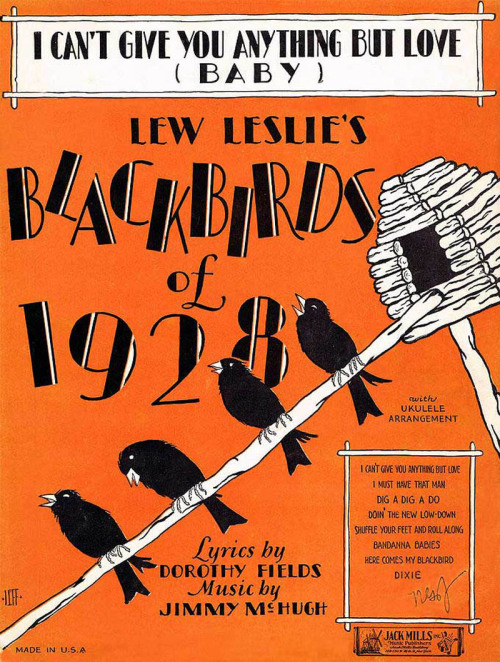 #blackbirds of 1928, #I Can't Give You Anything but Love, #Bill Robinson, #Bojangles, #Dorothy Fields, #Jimmy McHugh, #Lena Horne
11 notes · See All
wrestling-and-fightingPhoto

Centrefold from The Wrestler Magazine, November 1967 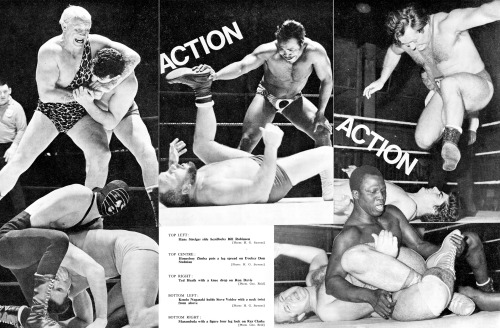 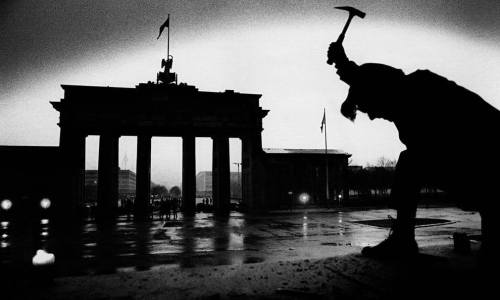 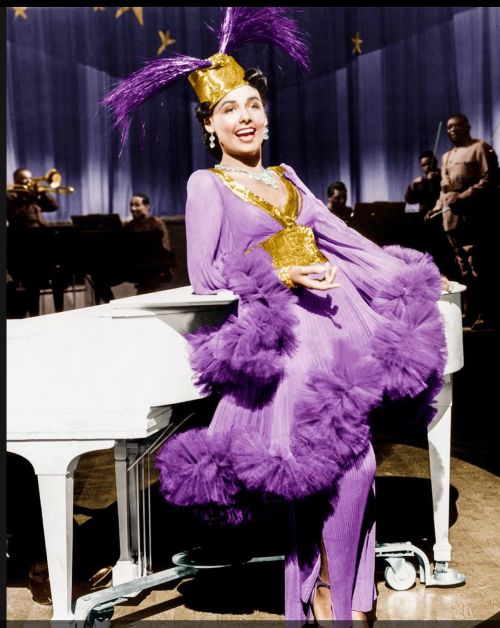 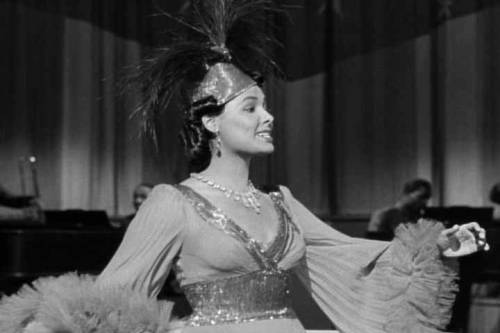 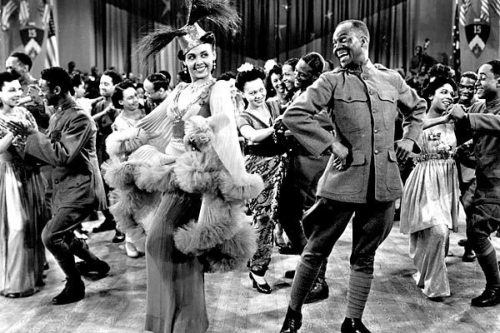 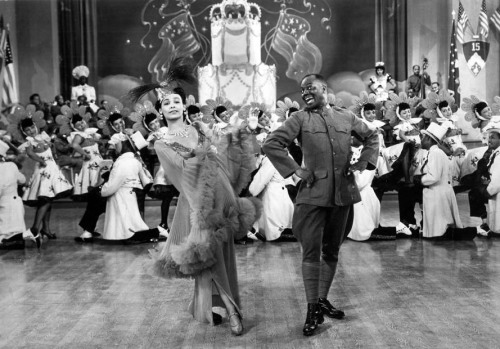 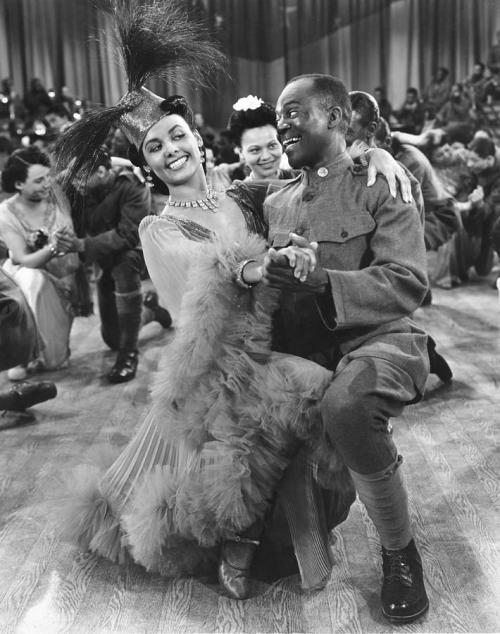 Bill (“Bojangles”) Robinson and Shirley Temple egging each other on in “The Little Colonel” (1935). 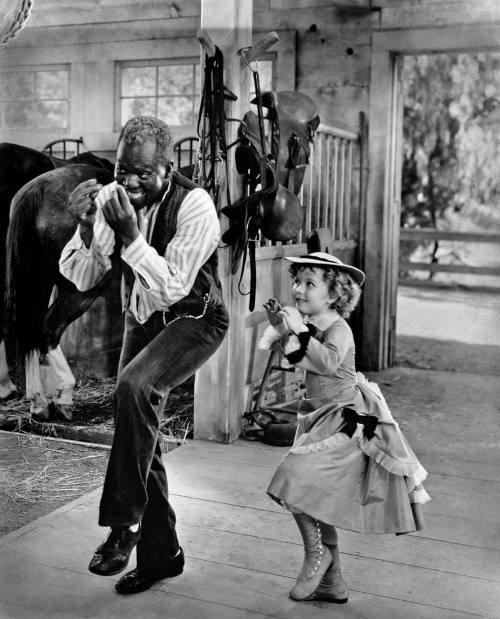