Turns out, I wronged a lot of people.

Harley Quinn in Birds Of Prey

Nicasius Bernaerts, Monsù Nicasio or simply Nicasius(1620, Antwerp – 1678, Paris) was a Flemish painter of animals, hunting pieces and flowers who had an international career in Italy and Paris. He worked for the French court and provided tapestry designs to the Gobelins Manufactory.

Bernaerts was born in Antwerp. He studied painting under Frans Snyders, the leading animal painter in Antwerp. After completing his training, he travelled to Italy. Here he was known as ‘Monsù Nicasio’. His work was collected in Italy by Ferdinando II de’ Medici, Grand Duke of Tuscany.

Bernaerts subsequently travelled to France where he worked in Paris for a number of years around 1643. He returned to Antwerp where he became a master of the Guild of Saint Luke in 1654.

In 1659 he moved to Paris. He was admitted into the Royal Academy of Painting and Sculpture in Paris in 1663. He was employed by the French king Louis XIV to make paintings of all the new animals added to his menagerie at Versailles. In 1673 Bernaerts provided 46 studies of 52 species of animals. Some of these paintings were subsequently used to decorate the pavilion at the menagerie.

He subsequently entered the service of the royal administration and provided studies and animal paintings for the needs of the Gobelins Manufactory and royal real estate office (Garde-Meuble de la Couronne).

Bernaerts was later in life reduced to poverty as a result of alcoholism. He died in poverty in 1678.

The French animal painter Alexandre-François Desportes was his pupil. 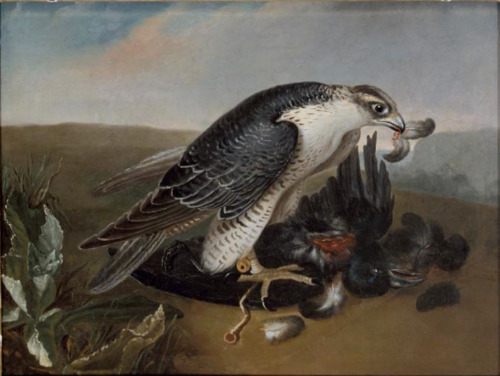 I have short hair but I still related to the hair tie scene in Birds of Prey so much.