Drew this at 4am hehehe

I always asked myself why exactly Horikoshi has changed Midoriya’s character design so drastically.

Indeed, we go from a character called Yamikumo who looks like a feral child with the bad habit of eating his nails off, and drinks more coffee than humanly possible to an anxious bunny who smiles awkwardly and does not know how to accept compliments.

To me, the difference is absolutely insane. Izuku’s hair and eyes are uniform and reflect his character and surname. However, a thing that I find peculiar is how the dark (Black/Green) and the Red theme are a constant throughout particular tellings of his character.

The legendary red shoes are one of Deku’s main features. It’s part of his character. However, I just got to think why exactly (especially having an idea on why was green used for him) and I think that the answer might be very very banal. However, I do think that this is not the only reason.

But what do these two colours mean, stand alone ?

As for Green: this colour, in different cultures, is associated with “Hope” . I think here the main gist and general going is that Midoriya represents Hope for the Heroes, Hope for the Unwanted, the Broken and the Damned (the Villains). I talked about Izuku being a Symbol of the New Society here, but in short, with Izuku Midoriya being fundamentally associated to the colour green, I think Horikoshi wants to express two things: how Izuku never loses hope (to be a hero, to have a quirk, to be a friend to Katsuki who bullied him for years or Shouto who straight up challenged him even before getting to know him, to reach and to save everyone) and how he represents and spreads hope for others (Eri, Kouta, the same Todoroki and Katsuki).

Green indicates life, renewal, harmony and safety. Which, in this sense, points out Izuku’s nature as a person and how he is bound to feel restless unless he provides comfort to everyone, and that desire to save desperately anyone who he can reach. Green is a calming and soothing colour. It also stands for prosperity, freshness and progress - which point out not only the conclusion of Deku being N1 Hero, but as well at him ‘changing up’ the society and becoming the Symbol of Hope and Change (on which I briefly touched upon here).

However, on a negative side it also stands for Greed (wanting to be a hero and follow AM steps even when he had a hard time adapting his body to his new quirk) and Envy (Bakugō first and foremost and the generally heroes and those who has time to wield their power properly). In this negative meaning of the colour, I think Izuku’s selfless nature comes to the surface even more: how he feels bound to feel negative emotions which spur his renewal and development (after all, he did unlock Black Whip after Monoma had insulted Bakugou), but at the same time use this emotion toward a bigger goal (him being mad at Shigaraki, but at the same time wanting to save him - I wrote about this too here).

Green, is, finally, the colour of the Heart chakra: an expression of how Midoriya puts everything before him, because his heart cannot take the selfishness of thinking of himself first, which also come hand in hand with his sacrificing nature and reminds of his name meaning and the association made with the number 9. Indeed, “Opening the Heart chakra allows a person to love more, empathise, and feel compassion” - which in short, stands for an externalisation of Mido’s personality.

On a shorter note, in Japan, the colour green represents youth, eternity, vitality and energy - which, in its own way is both a confirmation and a denial to other references made in Izuku’s character, such as his dangerous nature, him not being concentrated to live on for more than he is allowed to fulfil his duty (him being tied to number 9 and so on), and at the same time it reminds us of OfA, as it gains more power and energy and at his cheery, youthful persona.

In addition, red is usually used to professionally gain attention (it’s hard to miss something so bright) and convey confidence. We know for a fact that Deku has been wearing red shoes since he was a kid (or at least, since he met Bakugō, which coincides with Izuku being four) and that despite being Quirkless, he always showed courage in standing out to people even when they thought of him as 'inferior’ because on his unusual condition.

Among other negative meaning, there is an overflow of temper, anger, agitation, and overbearing, demanding and oppressive behaviours. As clear as day, these characteristics relate more to fiery Katsuki than Deku, but as stated before, Deku puts Katsuki as model and adapts his combat style to resemble Katsuki’s. So, this overflow of energy and action is a double-edged sword which affects both Katsuki and Izuku in different ways (and is mellowed out in Izuku’s character by his other soothing characteristics , but more on that later).

Also, Red, in Asia is a lucky colour which might (or not) hint at how, despite everything Izuku got his 'lucky’ chance to inherit AM’s power and follow his dream of becoming a hero. Particularly, in Japan this colour is associated and denotes strength, passion, self-sacrifice. A transmission of feeling as complex and empowering as the ones Deku fills while he is living his everyday life as a future hero, summed to his nature and inherited quirk.

Red is also a magical and religious color. It symbolized super-human heroism to the Greeks and is the color of the Christian crucifixion, which might be as meaningless as other things, but in this case it might greatly relate to the type of enormous power Izuku tries to reign in, and to the self sacrificing spirit which he proves again and again.

So far, the meanings of the colours which have been associated with Deku are in line with his name, his personality and even the storyline which has been drawed out.

Among other meanings red represents power, courage, energy, passion, and creates physical effects such as enhanced metabolism, enthusiasm, higher level of energy (which comes back to the initial reasons on why Deku chooses Red as a distinct colour for himself and his shoes).

What do these two colours mean in association with each other?

Onto how these two colours are related to each other, especially considering the premises made, we see that Red (life-giving properties, trust, belonging and violence) and Green (health, eternity, youth and greed) are not only opposites, but they complete and balance each other out. Indeed, to reign over emotions and actions, to red is usually added green which indeed is a pain-relieving patch for red’s intensity (the theory of Bakugou and Deku being two sides of the same coin are thriving).

Midoriya Izuku is an intense person. His personality allows him to balance out his power with a selfless nature, and while he himself is sweet and caring, his fiery eyes (and shoes) express for him his utmost sincere feelings, which deep down are very telling. As mentioned before, Izuku responds to Monoma when he insults Bakugou and makes a jab at how actually Bakugou is the one who ultimately terminated AM, by unlocking a new dangerous and powerful quirk, which is so powerful and fiery, and red in his intensity, that they need Shinsou’s intervention to actually calm him down.

Izuku is a overly protective person: he has forgiveness as a foremost characteristic and even if he does mention how he will not forgive Shigaraki for what he has done, on second though he realises that even a ‘monster’ like Shigaraki deserves to be saved, and therefore his other nature takes over.

Therefore, the coexistence of these factors, and his personality are probably at the origin of why Midoriya has had such a drastic make-over before becoming Midoriya Izuku, and why the colours of Red and Green are fundamental in the description which lets us have a full picture of Midoriya as an individual: something who is full of hope and energy, striving to express whisk power and passion while trying to concern only himself with the danger that comes with his mission to save everyone.

so i just sent 2 texts to 2 different people in rapid succession and I’m reeling bec friend behaviour is so Different from best-friend behaviour???? like the vibe is just Different ok ur honour-

v/s Deku with literally anyone else

It’s not yet complete (but being updated actively and also INCREDIBLY long already even though it’s not yet done) and does contain some dark themes so check the tags - but truly, it’s probably in the top 3 fics I’ve ever read.

Bakugou: oi, if you wanna confess others about our relationship you don’t need to care about their opinions, just tell it like i would

Izuku: me and kacchan are in a Relationship, got a problem with that, ha? *imitating bakugou*

Bakugo: not to your mom!

My thoughts after chapter 303

I wonder if the vestiges are gonna call out Deku’s obvious attachment to Kacchan. Like they just chill in the spirit world vibing and then some Mf has the audacity to insult Kacchan and they all collectively sigh and be like “alright whose turn is it to help this kid go apeshit now??!”

Katsuki: I wanted to apologize.

Katsuki: Let me finish. I said I wanted to. And then I realized, I’m not sorry.

what if we ruined our own surprise reunion bc we saw each other before we were supposed to and we were dating, (do not reblog)

#do not reblog#its not finished theres a whole part meant to be after this where bkdk gets made fun of#bkdk#you may comment. if you are so inclined#just a little. bkdk ficlet. because i said so
8 notes
strialternatives
Photo 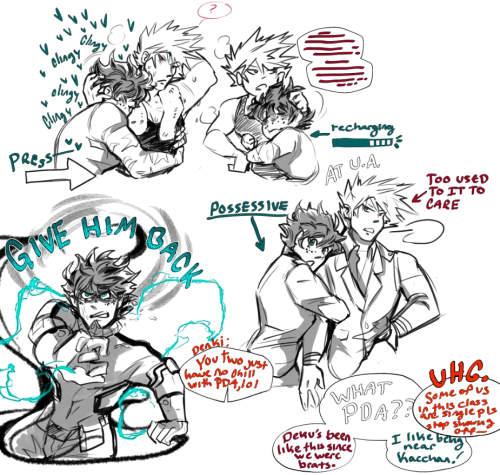 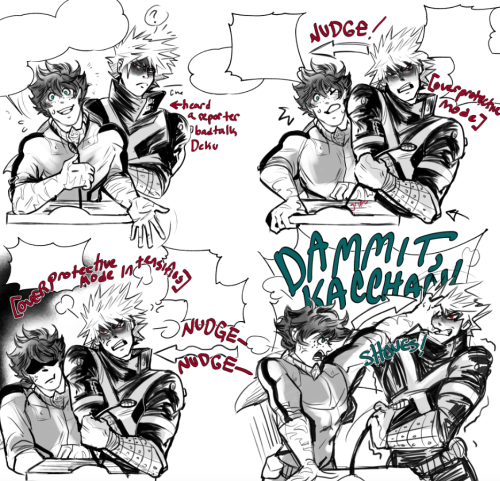 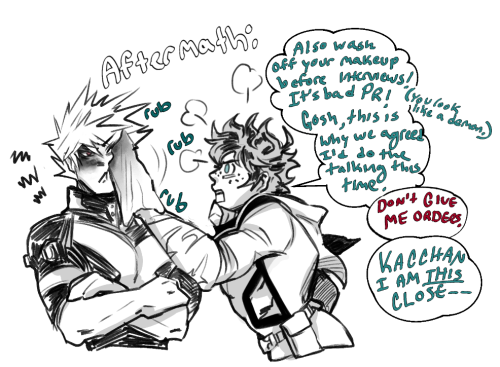 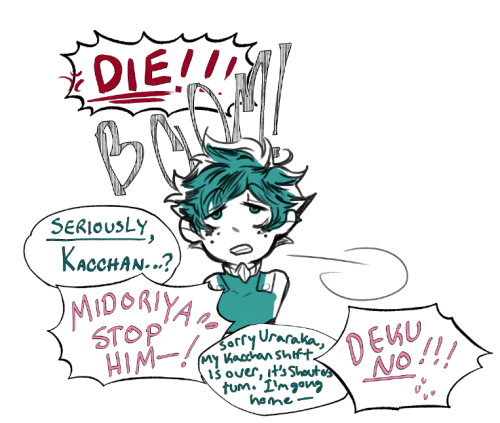 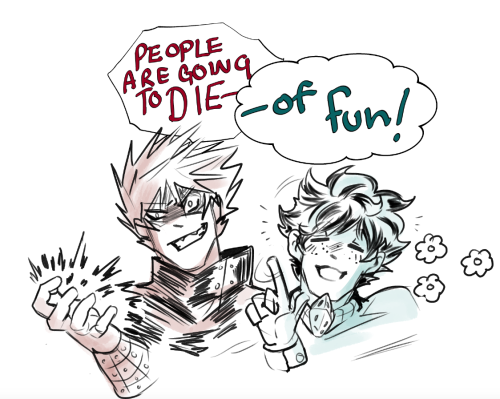 Can’t wait for this panel to be animated. Wahchan is just so cute 🧡💚

give me bkdk reunion or give me therapy

Seriously. People who think he’s just angry to be angry obviously need to reread everything up till this point tbh

I think Deku would like mint chocolate chip and Katsuki would enjoy like….caramel swirl or something

Bkdk are so close and more people need to recognize it